Sharing tea, sandwiches and relaxed conversation with the Duchess of Cornwall made for an afternoon that octogenarian siblings Mary, Alice and George Dowling will cherish for ever.

However, their visit to Clarence House last week was not purely social, but also a recognition of the bravery they displayed in the face of a terrifying ordeal.

In two appalling attacks just a week apart, masked raiders burst into the house they share and snatched all they had – a total of £1,400, including their pensions, savings and money they had set aside for animal charities.

Yet Mary, 88, Alice, 83, and George, 89, showed such strength of character over the incident that police officers at their local station in Shepherd’s Bush, West London, held a collection and raised more than £700 to compensate them for their loss.

The Dowling siblings had tea at Clarence House after the Duchess of Cornwall heard about two robberies at their home. Pictured from left: Alice, 83; Camilla, 70; Mary, 88; George, 89

Sergeant Andy Le Geyt also arranged for them to meet their favourite member of the Royal Family, whose sympathetic ear provided some much needed cheer after their distress.

Mary said: ‘We wanted to meet Camilla because she seemed the most down-to-earth and she didn’t disappoint. She was so gracious.

‘She shook our hand and said she was sorry to hear about what we went through and that she was glad that we had not been seriously hurt. She was lovely.

‘She was exactly how we hoped she would be – a very classy lady, with no airs and graces.

‘It wasn’t just what she said – I don’t remember much of it as I was so excited – but that she treated us normally. She said she just wanted to do something special for us after what we’ve been through.’

Alice also declared the Duchess ‘a fine lady’ who had a ‘lovely sense of humour’. 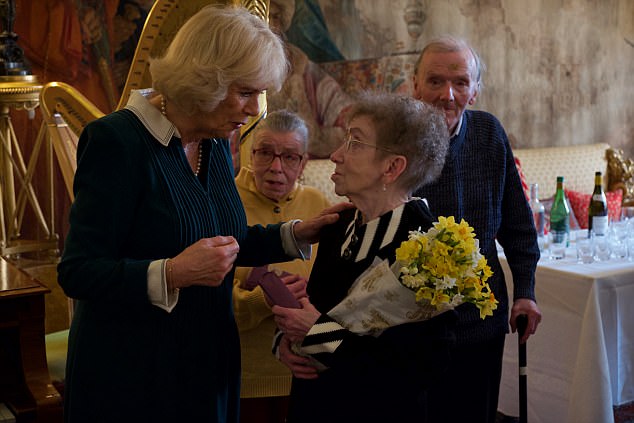 The Duchess of Cornwall puts a hand on Alice’s shoulder as siblings Mary and George look in. The siblings had lost £1,400 of savings and pensions in two shocking robberies

Before visiting Clarence House, the siblings, who have lived in the same house since 1969, hadn’t been to Central London for 20 years.

‘Our home was our sanctuary, but now we have to push heavy boxes against the door at night in case someone tries to break in,’ said Mary.

She blames herself for the first robbery because she opened the front door without checking who was there, since she was expecting a parcel. Instead of a friendly postman, three masked men burst into the narrow hallway, roughly shoving her aside. The men then held all three siblings hostage while they ransacked cupboards and drawers before fleeing with their haul.

A week later, they were robbed again when a gang – presumably the same one – burst into the house. This time, the raiders took all the family had: George’s £89 pension.

Both sisters sustained bruises to their arms when they tried to challenge the raiders. 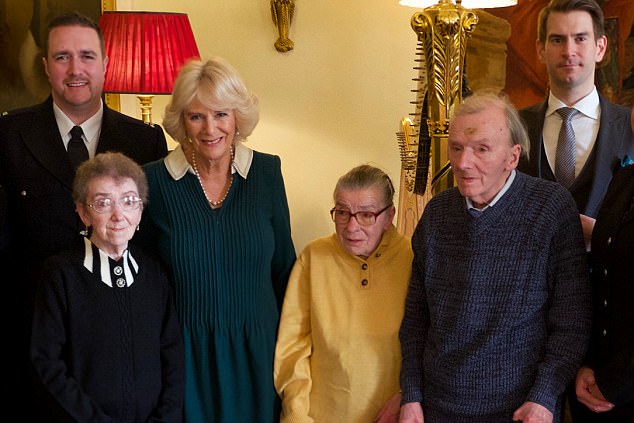 Mary, Alice and George showed such strength of character that police officers in Shepherd’s Bush held a collection and raised more than £700 to compensate them for their loss

Sgt Le Geyt arranged the Royal visit by writing to the Duchess, who is patron of The Silver Line, a free charity helpline for older people, to ask if she would visit the Dowlings at their home.

The Duchess responded with an invitation for afternoon tea and a tour of Clarence House instead.

The siblings also received a separate private tour of 10 Downing Street on the same day.

Sophie Andrews, chief executive of The Silver Line, said it was important for people like the Dowlings not to feel alone.

‘A lot of people of their generation don’t want to be seen as weak and needy, but we want them to know that there is help and we can be that first port of call,’ she said, adding that their operators – on 0800 470 8090 – can deal with the appropriate authorities ‘or just provide a listening ear’. 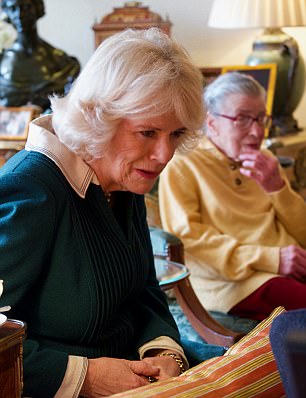 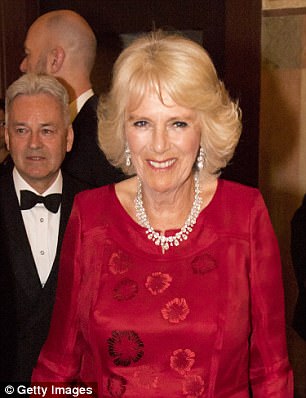 A police officer had asked if the Duchess, who is patron of a charity helpline for older people, would visit the Dowlings at home, but she offered them tea at Clarence House instead