Can a spray REALLY stop you snoring or help you to lose weight?

Nose and mouth sprays are a highly effective way to get medication into the body — unlike a pill, the drug does not have to pass through the acidic environment of the stomach, which can reduce its effectiveness, nor does it have to be metabolised by the liver.

Delivering medicines in this way is so effective that there are now sprays to treat everything from snoring to infections.

In the UK, we spend £10 million a year on hay fever sprays alone.

Here, experts offer their verdicts on some of the more novel over-the-counter products. We then rated them…

LACK OF VITAMIN B 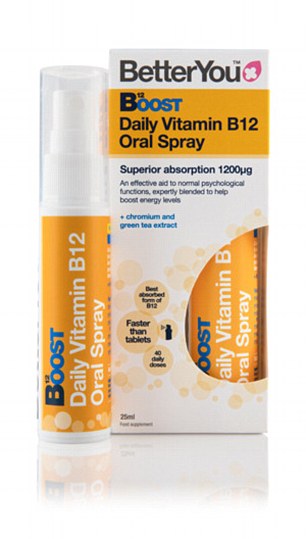 Boosted: This contains vitamin B12, which is vital for the body’s healthy red blood cells

This contains vitamin B12, which is vital for the body to produce healthy red blood cells that can carry oxygen to muscles, organs and tissues. A shortage of it can lead to anaemia — symptoms of this include extreme tiredness, a lack of energy, a sore and red tongue and mouth ulcers.

Vitamin B12 is found in meat, fish, eggs, dairy products and yeast extracts (such as Marmite). The body does not store it, so it has to come from our diet. This mouth spray is intended to keep levels topped up.

It should be taken four times a day, sprayed under the tongue or on the inner cheek. For ages five and above.

EXPERT VERDICT: ‘Most people get everything they need from a varied diet — including vitamin B12,’ says Susan Short, from the British Dietetic Association.

‘But those on vegan diets may be at risk of a deficiency and the spray is a good alternative to swallowing tablets. However, I would recommend checking with a doctor, dietitian or pharmacist first to see if you really need it.’ 2/5 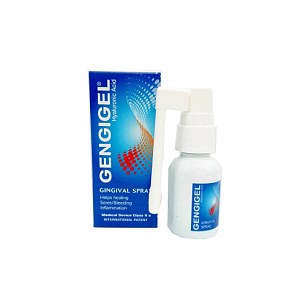 Mouthful: This spray is designed to soothe inflamed gums and stop minor bleeding

Three out of four UK adults suffer from bleeding gums at some point. The cause is gingivitis, or inflammation of the gums, and most people notice it as they brush their teeth.

Left untreated, it can lead to periodontitis, where the tissues that hold the teeth in place become damaged, increasing the likelihood of teeth falling out.

This spray is designed to soothe inflamed gums and stop minor bleeding. It contains hyaluronic acid, a naturally occurring component of connective tissue in the body, which helps repair damage.

EXPERT VERDICT: ‘Hyaluronic acid is good for soothing the mouth and helping reduce gum bleeding and inflammation, and this spray can help treat gingivitis,’ says Dr Richard Marques, a dentist at the Wimpole Street Dental Clinic in London.

‘But whether it can help with periodontitis is debatable, as it doesn’t treat infection.’ 4/5 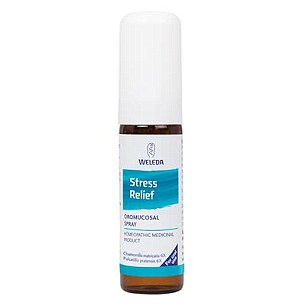 And relax: This herbal mouth spray claims to have a sedative effect on the brain

This is a daily, herbal mouth spray which the manufacturer claims can ease mild stress, irritability and tension.

It contains chamomile and extracts of a plant called pulsatilla, which is used in homoeopathy. According to the label, it is also 16 per cent ethanol — or alcohol — so it is not recommended for under-18s.

You can use it up to three times a day. The claim is that it has a sedative effect on the brain and acts as a muscle relaxant.

EXPERT VERDICT: ‘Anything with alcohol in it is likely to be temporarily calming, as it has a sedative effect,’ says Cary Cooper, a professor of psychology from Manchester Business School.

‘But the spray won’t get rid of the underlying problem, whether that’s finances, work or a bad relationship.’ 1/5 A fine spray made from seawater which the manufacturer says ‘gently moisturises and cleanses nasal passages’ to make breathing easier.

It also claims it has anti-inflammatory properties to reduce swelling and blockages in the nostrils and that is suitable for all ages. Use two to six times a day in each nostril.

EXPERT VERDICT: ‘This is very useful. Saline — salt water — is recommended in international guidelines for the treatment of chronic sinusitis,’ says Professor Tony Narula, an ear, nose and throat surgeon at The Princess Grace Hospital in London.

‘The salt helps by drying out the mucus, which makes it easier to remove the mucus when you blow your nose.’ 4/5 Fact: 15 million people in the UK regularly snore — and two thirds of them are men

About 15 million people in the UK regularly snore — and two thirds of them are men. This disrupts the sleep of both sufferers and their partners, and severe snoring which constantly interferes with breathing (sleep apnoea) is also thought to be a risk factor for heart disease.

Nytol’s spray creates a thin foam that settles on the back of the throat to reduce the vibrations caused when air passes over soft tissue — this is what creates the rasping sound of a snore.

The active ingredient is phosphatidylcholine, which is said to help throat muscles remain firm, eliminating snoring.

Use three squirts of the spray before going to bed.

EXPERT VERDICT: Dr Neil Stanley, an independent sleep expert, says: ‘There is some evidence that sprays like this can reduce snoring in some people, as they stop the muscles relaxing so much. But if you have pauses in your breathing during sleep [ie, sleep apnoea], see your GP.’ 3/5 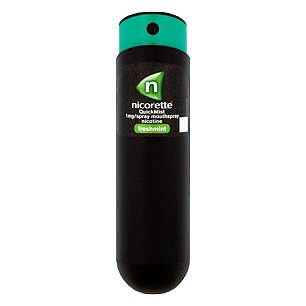 Truth: Nicotine replacement therapy is one of the most effective ways to quit smoking

Nicotine replacement therapy is one of the most effective ways to quit smoking. Two squirts of this should give you roughly the equivalent nicotine you would get from one cigarette.

EXPERT VERDICT: ‘Sprays can help in overcoming sudden urges to smoke, but a combination of nicotine therapies — such as skin patches alongside sprays — is more effective than using one product on its own,’ says Professor Helen Stokes-Lampard, chair of the Royal College of GPs. 2/5 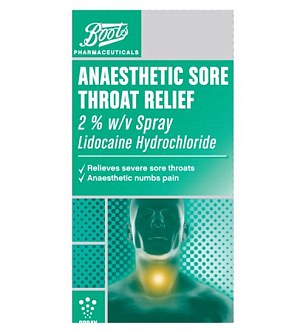 This contains the anaesthetic lidocaine hydrochloride and should be squirted into the mouth three times, every three hours or so to numb the pain of a sore throat.

It can make the tongue numb, so take care with hot foods or drinks.

Suitable for adults and children aged 12 and over, the spray is available over the counter, with a pharmacist’s approval.

‘But if they haven’t got rid of the sore throat within three to five days, see a doctor.’ 4/5 EXPERT VERDICT: ‘There is little or no evidence that using a product like this will help with weight loss,’ says dietitian Susan Short. 0/5 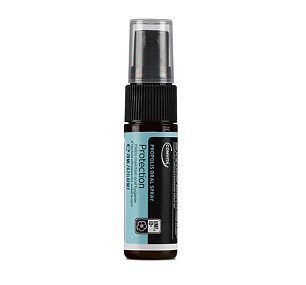 Natural: This spray is also 10 per cent Manuka honey, which has strong antibacterial effects

This contains propolis, a waxy material made by bees from tree resin, which is said to have antibacterial and antiviral properties.

The spray is also 10 per cent Manuka honey, whose strong antibacterial effects are useful in wound healing. Spray three squirts into the mouth or back of the throat when needed.

EXPERT VERDICT: ‘Manuka honey and propolis are good for reducing the risk of mouth infections such as streptococcus mutans, which causes gum infections,’ says dentist Dr Richard Marques. ‘Propolis contains a compound called pinocembrin, which acts as an anti-fungal.’

As propolis can cause severe allergic reactions, you should stop using the spray if you get swelling of the mouth or throat. 4/5