Can ANYTHING cure my fear of needles? DR MARTIN SCURR answers your health questions

I am very scared of needles, is there anything I can do to prevent myself from fainting?

Rest assured, you are not alone. Trypanophobia, to give a fear of needles its proper name, is very common and I have much experience in counselling patients who are affected by it.

Up to ten per cent of the UK population is thought to have this phobia, meaning millions will have been grappling with their fear these past few months when going for their Covid-19 vaccination.

In some cases, the mere thought of a needle is enough to make someone pass out.

Trypanophobia, to give a fear of needles its proper name, is very common and I have much experience in counselling patients who are affected by it [File photo]

Other symptoms of the phobia include dizziness, a dry mouth, palpitations, sweating, trembling, shortness of breath and nausea.

Fainting occurs when the sight — or thought — of a needle overstimulates the vagus nerve, which runs from the brain to the bowel.

It regulates many functions, including blood pressure and heart rate, and this overstimulation leads to an immediate drop in heart rate and blood pressure. This reduces blood flow to the brain, causing a brief loss of consciousness.

Such a reaction is subconscious and is difficult to override even in the medically trained, as I discovered when a colleague asked for my help in removing a long wooden splinter.

It had become trapped under his thumbnail as he was sanding old floorboards, and posed a risk of infection, but removing it would involve minor surgery and an injection of local anaesthetic on either side of his thumb.

Forewarned that the sight of the needle would likely lead him to faint, I lay him flat on the examination couch, which can help blood flow to the brain. 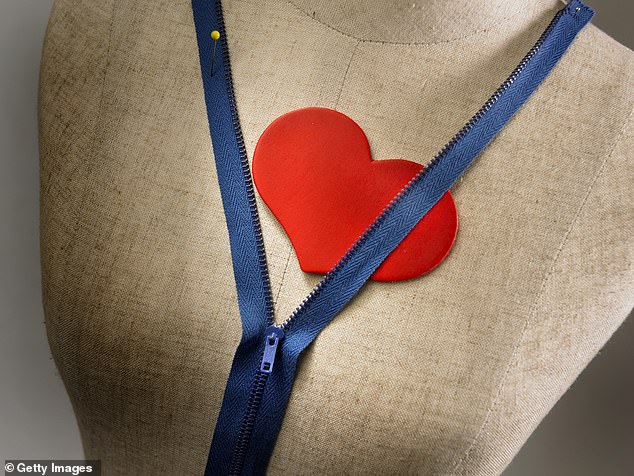 Fainting occurs when the sight — or thought — of a needle overstimulates the vagus nerve, which runs from the brain to the bowel. It regulates many functions, including blood pressure and heart rate, and this overstimulation leads to an immediate drop in heart rate and blood pressure

Despite that precaution, and his extensive medical knowledge (he is a consultant neurologist), he turned white as I began to inject the anaesthetic and fell unconscious. He recovered after a few minutes.

It is possible that this fear response to needles is primed in childhood — a phenomenon known as a conditioned reflex.

Treatments include cognitive behavioural therapy (CBT), a form of talking therapy, and exposure therapy. The former teaches you to replace negative thoughts (fear of the needle) with positive ones.

Exposure therapy, which is used to treat other phobias such as a fear of spiders, involves gradually exposing a person to the stimulus they fear, to make it less daunting.

Your GP can refer you to a clinical psychologist for these therapies, or you can self-refer through the NHS website.

But while such interventions may cure your fear of needles — meaning you can face the thought of an injection — the fainting reflex is more difficult to conquer. With that in mind, I strongly suggest you lie flat for any injection or blood test.

I’ve had a dull ache in my right upper arm for about a year, as well as stiffness in my right hand, trouble sleeping, eczema, weight loss and digestion problems. Blood tests have proved inconclusive. I’m 67.

Your symptoms sound challenging, but I can reassure you that further tests should be able to help confirm a diagnosis and alleviate your anxiety.

Making a diagnosis on the basis of your description would be unwise, as there are too many unknowns — which is why you need further tests — but, essentially, you have two groups of symptoms.

The first includes the chronic pain in the right upper arm and shoulder, and persistent pain in the right lower leg, which you mention in your longer letter. You say this has been present for more than a year.

One explanation may be spinal osteoarthritis; degenerative disease in the spinal discs could be causing pain in both the shoulder and arm, despite not originating there (this is known as referred pain), and your right leg.

The second group of symptoms are those associated with your waking up at night — in your longer letter, you also mention hot sweats and rapid palpitations. It may be that your weight loss is linked to these.

They could be due to a number of causes, ranging from an overactive thyroid gland to panic attacks.

You need up-to-date blood tests, including those that measure inflammatory markers, known as the ESR (erythrocyte sedimentation rate) and CRP (C-reactive protein), along with checks for anaemia.

I’d also recommend a blood test to check your thyroid function, and possibly spinal scans, too.

The uncertainty arising from your unexplained symptoms, particularly during the pandemic, is undoubtedly contributing to your anxiety.

I very much hope that further discussions with your GP will enable some progress.

In my view: When low cholesterol may be harmful

I am a great believer in statins — I take one myself due to considerably raised cholesterol levels. But a recent study makes me wonder if too many people are having their levels pushed too low.

We know for certain that high levels of low-density lipoprotein (LDL) — ‘bad’ cholesterol — is a risk factor for cardiovascular disease, and you’re more likely to have a heart attack or die prematurely. The current guidance is that your LDL level should not be above 3mmol/l.

For that reason, anybody diagnosed with coronary heart disease — confirmed by scans showing that the coronary arteries are furred — will need to take a statin for life. That is referred to as secondary prevention, and it saves lives.

Could it be that many people, put on statins for primary prevention, are overtreated, their LDL being pushed too low? For those who are otherwise healthy, aiming for very low LDL levels may be not be ideal

In people with this diagnosis, there is no controversy about pushing the LDL to the lowest possible level. We aim for 2mmol/l. What we do not know with the same degree of certainty is the benefit of prescribing statins for people who are apparently well (known as primary prevention).

There are other measures that can be taken to encourage good health, such as exercise, and the level of LDL needed to minimise the risk of premature death is not certain: lowest may not be best.

Cholesterol is, after all, the raw material needed to make many aspects of our body — our sex hormones, for example.

Last December, a study in The BMJ showed that an LDL level of 3.6 is linked to the lowest all-cause risk of mortality.

This throws a cat among the pigeons. Could it be that many people, put on statins for primary prevention, are overtreated, their LDL being pushed too low?

For those who are otherwise healthy, aiming for very low LDL levels may be not be ideal.