Can anything stop the stock market’s relentless rise?

NEW YORK (AP) – It’s been 365 days since the Dow Jones industrial average first crossed 20,000, and it’s already up another 30-plus percent as the stock market’s relentless rise to records keeps going.

Few market watchers see a sharp reversal for stocks anytime soon, at least this year. But press them on what could possibly derail the market’s run, and they usually land on a similar list of potential threats.

The warnings come couched with caveats: The general expectation is for stocks to keep rising, albeit at a slower pace, because the odds seem low for a recession this year. Economies around the world are finally in sync and growing together, and the U.S. is getting an extra kick from recently passed tax cuts. That should keep profits on the upswing for companies, and stock prices tend to follow the direction of profits.

FILE – In this Tuesday, Oct. 25, 2016, file photo, a miniature reproduction of Arturo Di Modica’s “Charging Bull” sculpture sits on display at a street vendor’s table outside the New York Stock Exchange, in lower Manhattan. The idea of the bull market dying because of central banks tightening too quickly is a concern, according to some experts. (AP Photo/Mary Altaffer, File)

But many potential potholes lie ahead. One concern centers on just how long and strong this bull market has been. Since they began rising in 2009, stocks have become more expensive than they’ve historically been, relative to corporate profits. That said, stocks have managed to keep climbing in the past, even when they’ve been as expensive and as deep into a bull run as they are now.

Here’s a look at other potential threats that could trip up what’s been one of the best runs for stocks in history:

– An unexpected spike in inflation.

Stocks and bonds have ripped higher in recent years as inflation has remained low. In fact, a major worry for years following the Great Recession was that it was too low. Central banks around the world approved massive stimulus programs to avoid a downward spiral where falling prices lead to a weaker economy, which in turn could lead to even lower prices.

Inflation is still relatively modest, but the job market is at its healthiest in years, and the unemployment rate is at a 17-year low. Theoretically, that should lead to higher wages for workers, which could push inflation higher across the economy.

If it picks up faster than the Federal Reserve is expecting, it could force the central bank to raise rates more quickly than it has prepped markets for. Given how expensive stock and bond markets have become, that could trigger turmoil, analysts say.

– Central banks around the world tightening too quickly.

It’s not just the Fed that investors are watching closely. Markets are trying to guess when central banks from Europe to Japan will tighten their spigots of stimulus.

The ultra-low interest rates that they have maintained have made it easier for companies and people to borrow. They’ve also pushed many investors into stocks, helping to goose their prices higher.

“The idea of the bull market dying because of central banks tightening too quickly, that’s the big worry,” said Marina Severinovsky, investment strategist at Schroders. She, though, is still optimistic that markets can keep rising broadly given the improvements in the global economy.

A big reason for the success of many investors’ 401(k) accounts is how much U.S. companies are benefiting from other countries’ economies doing better.

Companies in the Standard & Poor’s 500 index got 43 percent of their sales from outside the country in 2016, the most recent full year for which S&P Dow Jones Indices has statistics. The biggest U.S. company, Apple, got 63 percent of its sales from abroad in its most recent fiscal year.

The worry is that a White House led by an “America First” ethos could enact barriers to trade that hurt those sales. One of President Donald Trump’s first actions after taking office was to pull out of a trade pact for Pacific nations, and the U.S. government is working to remake the North American Free Trade Agreement.

Earlier this week, the U.S. government moved to tax imported solar cells and washing machines. At a meeting of global business and political leaders in Switzerland, Commerce Secretary Wilbur Ross on Wednesday conceded that China could respond with its own tariffs on U.S. products.

Tensions are high around the world, and so are the stakes when a misstep could lead to nuclear weapons being launched.

Besides the war of words that has heated up between the U.S. and nuclear-armed North Korea, investors worry about the potential for conflict in the Middle East and other areas around the world.

– Expectations have become too high.

Randy Frederick, vice president of trading & derivatives at Charles Schwab, said he is starting to worry that investors are becoming too relaxed and too confident that stocks are going to continue to climb without any major obstacles.

“We see more optimism and more complacency than we’ve seen in a long time in this bull market,” Frederick said. “Should those things get out of control, that could be a problem.” 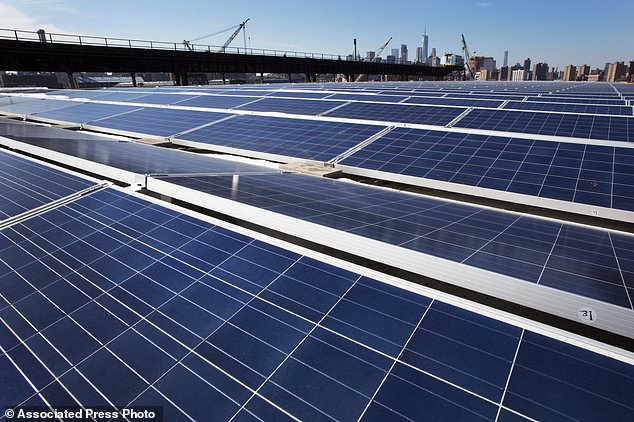 FILE – In this Feb. 14, 2017, file photo, a rooftop is covered with solar panels at the Brooklyn Navy Yard, Tuesday, Feb. 14, 2017, in New York. In January 2018, the U.S. government moved to tax imported solar cells and washing machines. At a meeting of global business and political leaders in Switzerland, Commerce Secretary Wilbur Ross on Wednesday, Jan. 24, 2018, conceded that China could respond with its own tariffs on U.S. products. (AP Photo/Mark Lennihan, File) 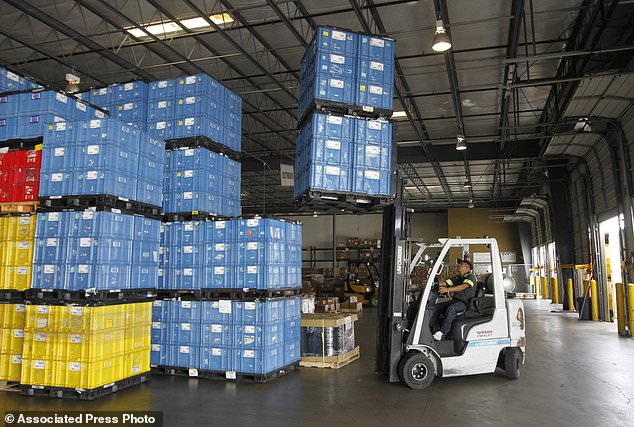 FILE – In this Friday June 2, 2017, file photo, crates of U.S. manufactured parts are prepared for shipment into Mexico at Freight Dispatch Service Agency LTD in Pharr, Texas. A big reason for the success of many investors’ 401(k) accounts is how much U.S. companies are benefiting from other countries’ economies doing better. There is some concern that a White House led by an “America First” ethos could enact barriers to trade that hurt companies’ sales outside the country. (Nathan Lambrecht/The Monitor via AP, File)