Can Novak Djokovic finally drop Rafael Nadal in it?

Can Novak Djokovic finally drop Rafael Nadal in it? Serb looking to put his art and soul into the French Open final

The art of making a tennis ball drop just over the net like a snowflake has been as much a feature of this strange French Open as the chilly autumnal weather.

The two things are related. And not only has the unprecedented use of the dropshot been a hugely welcome feature for those watching, it may decide the outcome of the men’s final on Sunday afternoon.

Rafael Nadal will take on Novak Djokovic trying to win his 13th Roland Garros title and his 20th major, which would equal Roger Federer. A win for Djokovic and he will be coming up on the rails even faster, with 18.

If the past fortnight is anything to go by a fascinating tug-of-war beckons between two natural baseliners. They will be constantly aware of the dangers of standing too far back, lest they fall victim to the delicate manoeuvre of the dropshot.

The world No 1 heralded what was to come when he played 25 of them in his first round against Mikael Ymer.

They have been a constant feature since. French outsider Hugo Gaston played 58 dropshots to such effect against US Open champion Dominic Thiem that he almost upset the No3 seed and so exhausted him that he lost his next match against Diego Schwartzman.

After his first round Djokovic summed up why he intended to persist with the strategy, saying: ‘It’s important tactically to have it and to use it at the right time so you can keep your opponent always guessing what the next shot is.’ 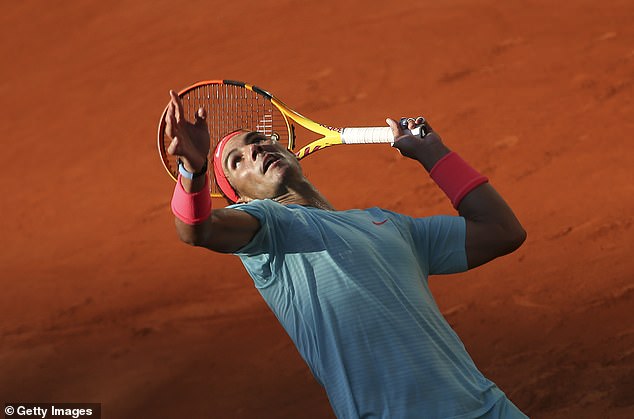 Its resurgence happily shows that the doomsayers who feared that artistry would die out in the modern era of power tennis were wrong.

Another sign of that is the refusal of the single-handed backhand to become extinct, at least among the men. Another is the increasing use of the sliced backhand that skims over the net and keeps low. Even the sneaky under arm serve is becoming more common.

David Felgate, the British coach who guided Tim Henman to the top 10 and has since worked with an assortment of elite players, pointed out some of the factors involved with the prevalence of the dropshot over the past two weeks.

‘The slower conditions with the cold weather and the heavy balls in Paris make it a great shot because the ball just dies,’ he said. ‘Twenty five years ago or so you really didn’t see it that much, but there were more players up at the net then,’ he said.

‘I also think it has got something to do with modern string technology. You get greater grip on the ball so they are easier to execute. Done well it is a very difficult shot to react to.’ 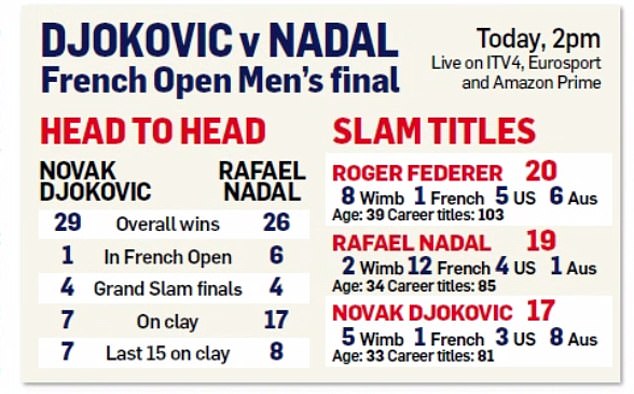 From his early days on tour Andy Murray was an exponent of what is still a high-risk play, which if miscued can invite a certain amount of ridicule. Get the arc of trajectory wrong and it either flops into the net or presents an easy putaway opportunity. Get it right and the effect is lethal and demoralising.

Djokovic is a master of disguise in abruptly opening up his racket face to impart the underspin necessary. Nadal is no slouch in this department either and it will be a key battleground in what will be their 56th meeting on tour, with the Serb leading the series 29-26.

The Spaniard has won 17 of their 24 matches on clay and he has won both of their previous French Open finals. This one may not play out the same. Again it comes back to the conditions, one of which is that more clay has needed to be put down to absorb the moisture. It has added to the deadening effect on the ball, which does not play to the extravagant spin he uses.

‘There have been other times at Roland Garros where I have felt better,’ he said. ‘The conditions are not perfect for my style nor for my impact on the ball, I will need to make another step forward.’

For Djokovic it is a shot at redemption at the back end of an often calamitous summer which has shown what a very unusual and volatile individual he is.

To this observer he is the more likely winner, not just because of the prevailing environment but the way he remained calm in the face of a fightback from Stefanos Tsitsipas on Friday night.

Perhaps he got his one skittish match out of the way when he looked injured in the quarter-final. Having tossed away a golden chance in New York with his petulant behaviour, it was as if his mind has now been focused on answering back, in the most devastating way possible.