Can you spot what’s unusual about this photo? Grandmother posted a snap of a bucket of KFC chicken

Seemingly unremarkable snap of a KFC fried chicken meal is wowing thousands of astonished foodies on social media – so can you spot why all is NOT as it seems?

An Australian woman has wowed thousands after sharing a seemingly unremarkable snap of a ‘KFC meal’ in a Facebook foodie group.

While at first glance the photo appears to be of a standard fried chicken meal with sides, the photo is actually of a carefully constructed cake made by Tasmanian grandmother-of-eight, Alice Munro.

The ‘cake hobbiest’ from Devonport, Tasmania, revealed that the impressive creation took her five to six hours to make to ensure it looked like the real deal.

‘The chicken pieces are mudcake dipped in white chocolate and rolled in crushed cornflakes,’ she told FEMAIL.

An Australian woman has wowed thousands after sharing a seemingly innocent snap of a ‘KFC meal’ in a Facebook foodie group (pictured). It is actually a carefully constructed cake – only the chip box, Pepsi label and sauce packets are the real deal 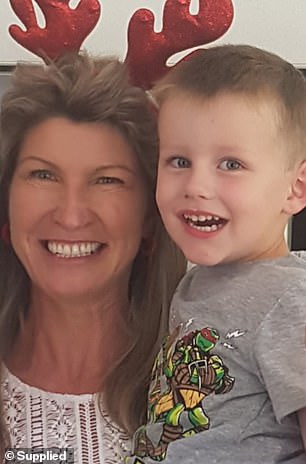 Facebook users were surprised to find out that the photo that Alice Munro (pictured), 50, shared was actually a cake

‘The bucket is made of vanilla sponge cake. I used Bakels white fondant to cover the cake and attached an edible image around the cake as I have my own edible printer.’

To make the chips as realistic as possible she used an original chip box from the fast food chain.

Ms Munro then stuffed it with paper towel so that she could position the yellow fondant fries which have been airbrushed with a light dusting of yellow/brown colouring.

‘For the Pepsi bottle I used an actual bottle as a chocolate mould and used the Pepsi wrapper to go back around it,’ she said.

In another photo Ms Munro took she sliced the chicken bucket open so that you can see how the cake was constructed. 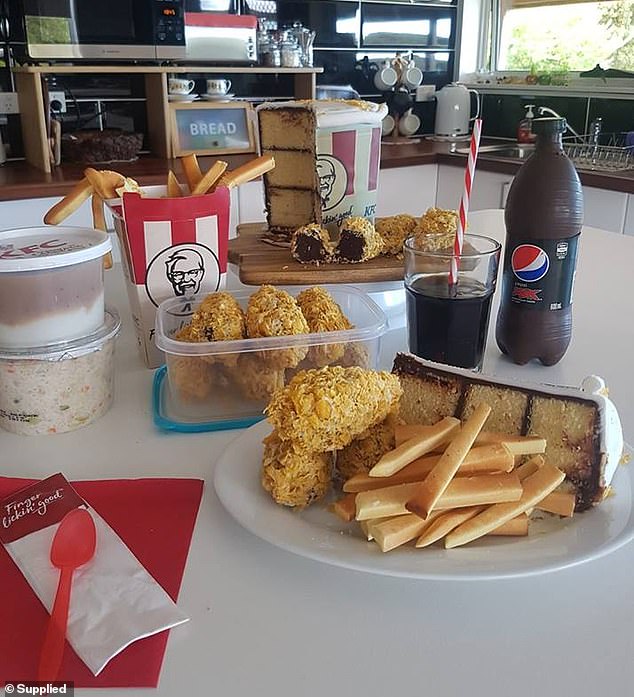 ‘The bucket is made of Vanilla sponge cake. I used Bakels white fondant to cover the cake and attached an edible image around the cake as I have my own edible printer,’ she said

How much did it cost?

‘I’m guessing $30. Only because I buy a lot of my ingredients in bulk,’ she said.

‘I have my own chickens so eggs are free. I did my own printing and it was $1.70 for Coles cornflakes.

‘I have never really worried about how much because its for family.’

She used three vanilla cakes that she placed on top of each other with chocolate icing acting as the glue to keep them together.

The busy grandmother said she decided to make the cake ‘just for fun’ and she also wanted to gain experience in using her ‘edible printer’.

‘I just make cakes for my family. The look on their faces is just priceless,’ Ms Munro added.

Others in the baking group couldn’t believe that it was actually a cake and shared their disbelief in the comment section.

‘YOU ARE JOKING! This is the best cake I’ve ever seen!’ One cake enthusiast wrote.

‘Wow that looks so legit. When I first saw it I thought it was the real deal. Amazing,’ said another.

How did she make the KFC bucket cake?

– She made three vanilla sponge cakes which she piled on top of each other, using chocolate icing as glue

– Then she covered it with Bakels white fondant

– To make the chips she used an original chip box from KFC, stuffed it with paper towel and positioned the yellow fondant fries which were airbrushed with a dusting of brown