Can you trust couple cliches?

You’ve heard them so many times and you’ve probably used them yourself, so there must be some truth in the popular sayings about relationships, right? Marital therapist Andrew G Marshall separates fact from fiction

You have to work at a marriage

You can almost see your mother wagging her finger. It makes marriage seem like a hard slog rather than a pleasure. However, if you throw this cliché away, you could end up believing the opposite: ‘love conquers all’, which can lead to your taking each other for granted and expecting your relationship to flourish on little more than swapping lists of instructions as you pass in the hallway.

Rather than ‘working’ at your relationship, try to develop good habits

Any truth? The message is fine, it’s the language that’s off. Rather than ‘working’ at your relationship, try to develop good habits, such as eating together with phones switched off, going to bed at the same time and booking regular weekends away. The great thing about good habits is they don’t require work; once established they happen naturally.

Once A Cheater, Always A Cheater

Rather like another common relationship saying – a leopard never changes his spots – the message is that our fundamental nature is fixed. If your spouse cheats, then the man you thought was ‘good’ is ‘bad’ and there’s no hope whatsoever.

Any truth? Of course there are serial cheats, but this cliché lumps the one-time offender in with them and is likely to make you panic and do something that you’ll later regret (such as throwing him out or telling your teenage daughter all the gory details). So let’s look at this another way: if I said you could never learn from your mistakes and change, you’d probably get angry. Could you extend that generosity to your partner, too? If he is genuinely sorry and prepared to acknowledge the pain he has caused, there’s no reason why you can’t emerge on the other side with a stronger marriage.

Once the ‘I only have eyes for you’ stage has finished, this adage suggests that it’s natural for those eyes to wander. No wonder it is often used by unfaithful partners to minimise (‘I only scratched an itch’) and excuse (‘It’s natural, what could I do?’) their bad behaviour.

Any truth? I’ve spent 30 years working with couples recovering from infidelity and I’ve never found a magic number of years when people become particularly vulnerable. However, seven years into a relationship is as good a time as any to look again at your love life. You’re no longer wearing the same clothes or going to the same restaurants as you were when you met, but because it’s hard to talk about sex, you’re probably still doing the same things in bed. So why not mix it up? Make love somewhere different, slow down your foreplay or tell each other your secret desire.

It’s great to be able to rely on someone to turn up when they say they will, who’s happy to fit in with your plans for the weekend and who seldom makes a scene. But you can be left feeling that the relationship is based more on companionship than passion.

Any truth Only if you confuse the adrenalin rush of fear and anxiety with love. I counsel lots of women who ricochet between dating bad boys (who cheat, drive too fast and don’t call for weeks) with nice guys (who adore them but end up boring them). If this sounds familiar, it’s probably because you had an emotionally unavailable or dangerous father who had a volatile temper, an eye for the ladies or drank too much. So instead of dating the same sort of men, try making peace with your father and looking for a boyfriend who breaks the pattern and is somewhere in the middle of the boring-to-bad spectrum – who is considerate but does not let you walk all over him. Bear in mind that if your husband is so nice it sometimes puts your teeth on edge, then he is holding back any ‘difficult’ feelings (of upset or anger), so try to draw him out: ‘I’d like to know what you’re really thinking.’ Don’t duck out of rows – they might be nasty at the time but they bring issues to the surface.

Originally from the 1970 movie Love Story, this suggests that love is a magic cure.

Any truth? None whatsoever. The greatest lie ever told. It suggests that you can treat your partner worse than everybody else because he loves you, he understands you and therefore he won’t be upset. However, when you apologise to your partner (and he does it to you), you’re saying: ‘I understand, your resentment is valid and I will try not to do it again.’ Apologising is one of the small things that can make a big difference to your relationship.

Extroverts like an audience so they go for introverts and in Hollywood romcoms uptight career women fall for lazy slobs, while ‘bad’ boys and ‘good’ girls get together and live happily ever after (see Danny and Sandy in Grease).

Any truth? Like many clichés, there is an opposite: ‘birds of a feather flock together’. And when it comes to relationships we tend to go for people from a similar background, education and with shared interests. Yet we’re also looking for someone to complete us and provide the things we lack. For example, someone to pull you out of your shell or who is successful and career focused can be appealing if you’re a shy homebody – especially at the beginning of the relationship. However, over time, these opposites can drive you apart – because you don’t want him to pull you on stage for karaoke or he’s never home to spend time with you and the kids.

You can’t love someone else until you love yourself

If you don’t like yourself, you’ll put up barriers – so people don’t discover you’re ‘damaged goods’ – but this ends up putting off potential partners.

Any truth? If you think there’s something wrong with you, the temptation is to look for someone to fix or rescue you. With this in mind, you can certainly idolise someone else but that’s not the same as love, which is about feeling secure enough to be vulnerable (rather than always worried that you’re going to fall short and be rejected). When your saviour turns out to be just a normal man, you feel betrayed, angry and look for someone else (and repeat the pattern all over again). Take it in easy stages. Start by aiming to ‘like’ yourself. Challenge the negative voice inside that puts you down and boost your self-esteem by setting a small but achievable goal – for example, to get fit and join a yoga class. Once you start to like yourself, you can open yourself up to love, in the knowledge that other people will like you too.

In my experience, this is the tip mothers are most likely to pass on to their daughters as the recipe for a happy marriage.

Any truth? The idea that you should settle disputes in a timely manner and not hold grudges is a really good one. However, it can lead to staying up half the night arguing or reaching for a quick truce before bedtime and hoping you’ll feel different in the morning (but never sorting anything out). Therefore, if things crop up late at night or are still unresolved from earlier in the day, make an appointment to talk together in the morning – and keep to it.

Although it can be a relief to have the house to yourself, to watch your favourite TV shows and have your girlfriends round, after a while the novelty wears off and you start to miss him. 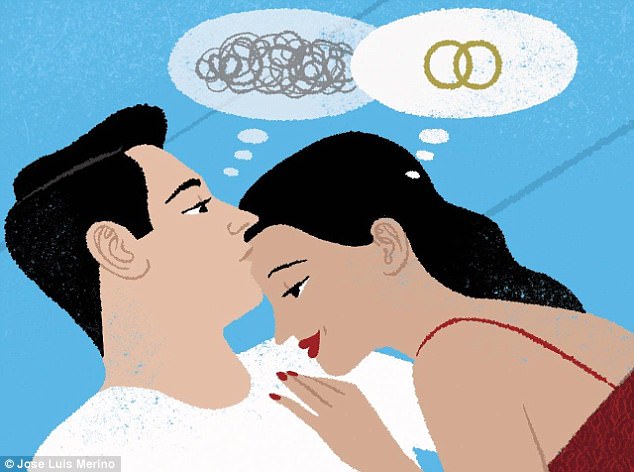 Any truth? It is good to have weekends apart to follow your separate interests or to have quality time with friends – because remembering that you are an individual, as well as one half of a couple, can re-energise your relationship. However, couples in crisis often think that time apart is going to be a magic bullet, which will make them appreciate each other and fall back in love without having to do the work (by which I mean being honest with each other about the problems, learning to listen without getting overwhelmed and finding better ways to communicate).

There’s no point saying ‘I love you’ if your behaviour suggests the complete opposite.

Any truth? There are five different ways of showing your love. One of the most common is doing ‘acts of service’ for other people (for example, picking up your husband from the station on a rainy day or staying in for his urgent parcel). That’s fine if your partner speaks the same love language but if his preferred language is ‘appreciative words’ – saying ‘I love you’ and giving lots of compliments – he is not going to register your kind actions and will long to have sweet nothings whispered in his ear. To check if the two of you match, the other love languages are: giving gifts, quality time together and affectionate physical contact.

Women always want a ring on their finger

This implies that women are always trapping men into marriage (even though it’s men who remarry quickly after a divorce or a bereavement).

Any truth? Men tend to outsource their emotional life to women (for example, to organise their social life, listen to their work problems and suggest a present for their mum) while women have close friends. Women are more self-sufficient and therefore less likely to ‘settle’ for just anybody – so it’s unfair to suggest that they are the ones always pushing for marriage. Ultimately, everybody wants to be held, stroked and loved. Yet there is still prejudice against single women (for example, married friends may stop issuing invitations in case they make a play for their spouses).

When faced with a big decision, if you ‘look inside’ you will find the answer. And when you meet the man you’re going to marry, you will ‘know’ he’s the one for you.

Any truth? Lots of people were trained – by their parents and school – to be logical, look at the facts and discount their feelings. At the other end of the scale there are people who are constantly swept away by their emotions. However, to make a wise decision you need to consult not only your head and heart but also your gut – by which I mean your intuition – which sends up a red flag when something is too good to be true. With big decisions it is hard to apportion how much weight to give the head, heart and gut because it will depend on the circumstances. However, the people who live to regret their choices (for example, staying too long in a bad marriage or having a reckless affair) have probably consulted only their head or their heart and not their gut.

Andrew G Marshall is the author of It’s Not a Midlife Crisis, It’s an Opportunity: How to be Forty- or Fifty-something Without Going off the Rails published by Marshall Method Publishing, price £12.99. For more information, visit andrewgmarshall.com