Canadian fashion mogul Peter Nygard’s luxury Bahamas estate has been seized by authorities amid allegations of illegal dredging at the property.

Nygard arrived at the Supreme Court of the Bahamas on Friday after the island’s Deputy Provost Marshall and police officers seized the estate at Nygard Cay after earlier being denied entry.

The court ordered the seizure after Nygard failed to pay almost $2.4 million in legal fees to Save The Bays, an environmental group that has been working to stop him from dredging the sea floor around his property, the National Post reports.

The move is the latest in the Finnish-born designer’s decade-long dispute with his neighbour – billionaire hedge fund manager Louis Bacon. 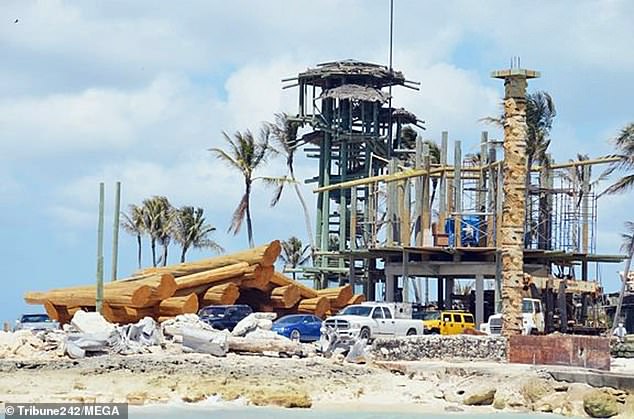 The court ordered the seizure after Nygard failed to pay almost $2.4 million in legal fees to Save The Bays. Pictured, construction at the property

Nygard, the chairman of Winnipeg-based Nygard International, and Bacon, own adjacent properties in Lyford Cay, a gated community on New Providence island.

Bacon has long opposed Nygard’s effort to expand his property in the Bahamas’ gated Lyford Cay community, following a 2009 fire.

Some environmental groups and residents have said an expansion may damage the surrounding ecosystem and beaches.

Nevertheless, Nygard has more or less doubled the size of his property over the past 30 years, Fred Smith, a lawyer for Save the Bays, said.

Smith claims Nygard’s actions have limited the natural flow of sand to his neighbor’s properties and a national park that is nearby.

Nygard has also ignored an injunction prohibiting him from dredging three times, which has led him to be convicted of contempt of court three times, according to the Post. 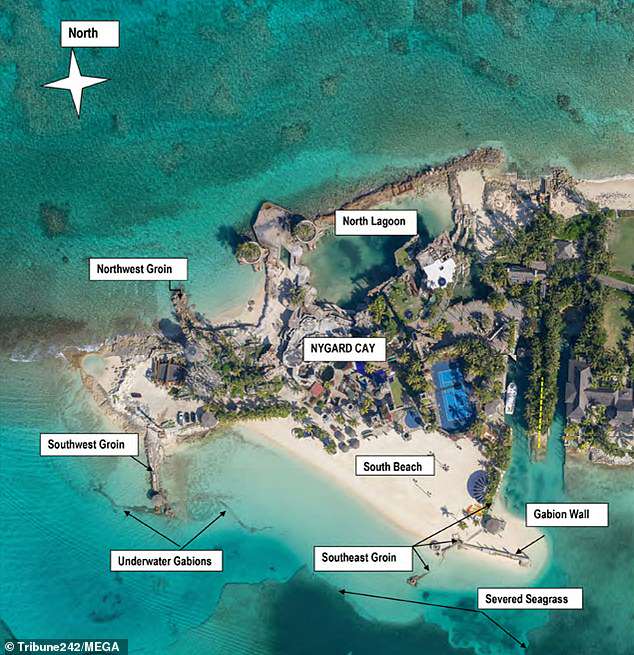 The move is the latest in the Finnish-born ‘s decade-long dispute with his neighbour – billionaire hedge fund manager Louis Bacon. 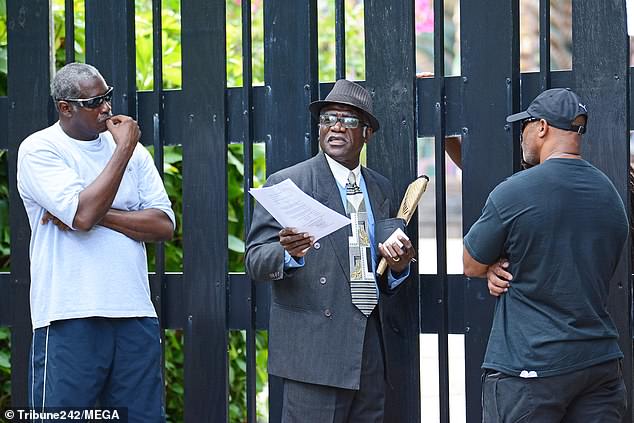 Bahamas’ Deputy Provost Marshal, along with a team of police officers, enter Nygard Cay after its seizure

‘Mr Nygard considers himself to be completely above the law in the Bahamas,’ Smith told the newspaper.

‘He’s been running his little Republic of Nygard since the 1980s here.’

Nygard’s company said in a statement that the seizure of his property is ‘illegal,’ the Winnipeg Free Press reports.

It was ‘clearly an orchestrated publicity stunt to create an unwarranted false impression about Mr Nygard,’ it says, adding the designer intends to sue those responsible.

Nygard has previously alleged that Save The Bays is a ‘front’ for Bacon, who he claims wants Nycard Cay.

Smith says that although Bacon is on the board of Save the Bays, the group doesn’t exist only to fight Nygard’s expansion plans.

The feud between Nygard and Bacon began with a drainage issue in 2007, a Vanity Fair article said.

But it escalated so much that two years ago, Bacon filed a lawsuit alleging Nygard had hired assassins to kill him and Smith.

Bacon, the founder of Moore Capital Management LP in New York, accused Nygard in the lawsuit of engineering a ‘malicious’ smear campaign against him including street rallies, bogus YouTube videos, and attempts to falsely link him to arson, bribery, drug smuggling, the Ku Klux Klan and murder. 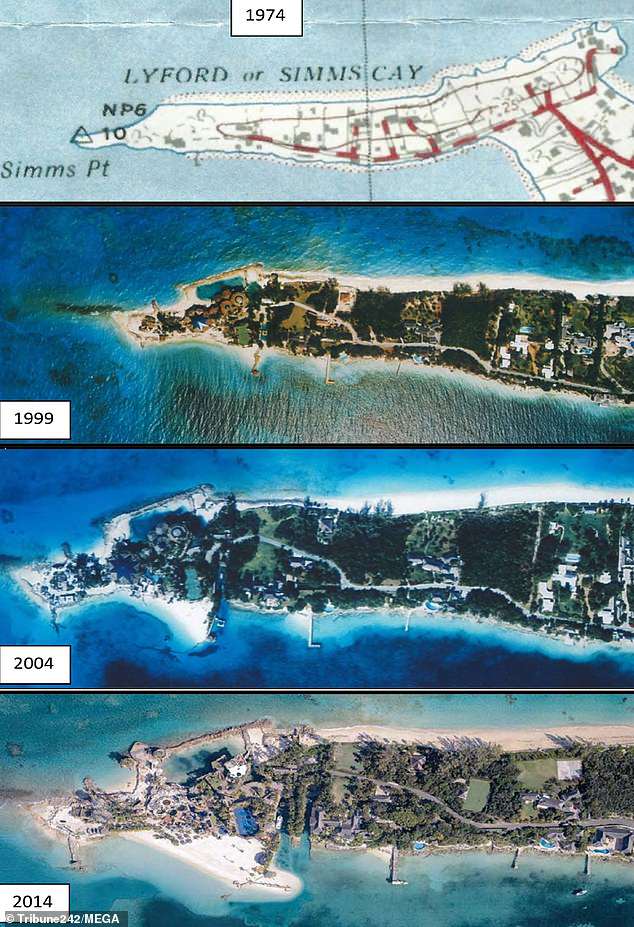 Nygard has more or less doubled the size of his property over the past 30 years, Fred Smith, a lawyer for Save the Bays, said

Bacon has since returned to New York and doesn’t visit the island often because he fears for his safety, Smith said.

At more than $50,000-a-night, Nygard Cay in the Bahamas offers one of the most expensive escapes in the world.

The $50 million resort has in the past lured celebrities like Robert De Niro, Oprah Winfrey and the late Michael Jackson.

The rich and famous come in search of luxury, privacy and sunny, 77-degree days.

Nygard developed the five-acre property in 1987, designing it to host 20 guests inside 10 glass-walled cabanas facing the ocean.

Nygard, who runs Nygard International, took 13 years to complete the Mayan-themed project, which includes a 50-foot-tall temple and a giant stone cobra that hisses steam.

The flamboyant tycoon splits his time among his company’s headquarters in New York, corporate facilities in Canada and the resort he created from the proceeds of his women’s clothing business.

By building the haven at the end of Lyford Cay, Nygard follows high-level executives Henry Ford II, the grandson of Henry Ford and former chairman of Ford; Ted Rogers, chief executive of Rogers Communications; and Charles Lazarus, the founder of Toys “R” Us.

While the glitterati get first priority at Nygard Cay, regular people can also book cabanas.

The resort dispatches Hummers to pick up guests at the airport in nearby Nassau, the capital of the Bahamas.

Visitors have two of the jumbo sport-utility vehicles and drivers at their disposal during their stays.

During the day, guests can explore the resort’s beaches, palm trees and rainforest. There’s volleyball, snorkeling, jet skiing, waterslides, basketball and a water trampoline for people looking for more activity. A 48-foot fishing boat is available to take visitors to see the parrotfish that roam the Caribbean’s deep blue waters.

Loungers can sign up for beachside massages, sip cocktails or soak in one of the property’s dozens of hot tubs.

Members of the 20-person staff are available to respond to visitors’ requests.

For entertainment, islandgoers can check out the 150,000-gallon aquarium or watch a movie in the 24-seat rainforest movie theater. Thrill-seekers can stop by the nightly shark feeding or have a chauffeur drive them to the Wyndham Nassau Resort & Crystal Place Casino, which is 15 minutes away, for some gambling.

The cost to stay at Nygard Cay includes meals and drinks. Guests can dine in the resort’s main entertainment hall, a massive structure whose walls and ceiling are made of 100,000 pounds of glass. This 32,000-square-foot space includes an opulent dining table that seats 24, a private breakfast room, a fully stocked bar, a game room and a five-star kitchen.

At night, the temple becomes a smoking volcano whose steps are lit with flaming torches. Revelers dancing on the main hall’s elevated floor can lose themselves in this modern Mayan kingdom.