A Canadian judge as been suspended without pay for wearing a Make America Great Again hat to an Ontario courtroom on November 9. 2016 – the day after the US election.

Judge Bernd Zabel, 69, said he was trying to lighten the mood by wearing the hat.

But not too may people were amused and the Zabel received 81 complaints.

He appeared in front of a four-member Judicial Council last month who said that the incident was an ‘inexplicable act of judicial misconduct’ from an otherwise respected judge’ in a statement released Tuesday.

Judge Bernd Zabel, 69, who was suspended without pay for wearing a Make America Great Again hat the day after the US election in court

The council found that the act of wearing the baseball cap into the courtroom ‘violated the fundamental principle that the judiciary must remain above and removed from politics,’ according to BBC.com.

And that a ‘reasonable’ member of the public could have thought that Judge Zabel was making a political statement.

Judge Zabel has sat on the bench for 27 years and presided over numerous cases.

He has since apologized since the incident and has been assigned a case since January.

Judge Zabel, who claims he is not a Trump supporter, said in court that it ‘pissed off the rest of the judges because they all voted for Hillary, so I was the only Trump supporter up there but that’s okay,’ according to the Toronto Star. 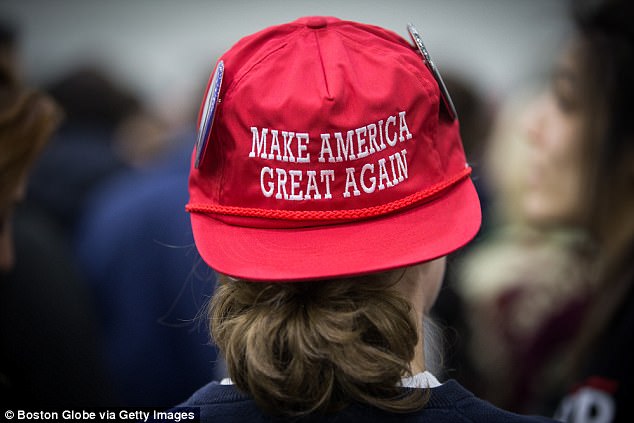 A supporter wearing a hat with the Trump campaign slogan, Make America great again, waits for the start of a campaign rally for Donald Trump in Holderness, New Hampshire

He told the council that what he meant by his court comment was that the other judges thought Hillary Clinton would win the presidency, but he was the only one who correctly predicted the outcome.

The biggest factor in its final decision for suspension revolved around Zabel’s record as an ‘open-minded and impartial’ judge.

The Ontario Judicial Council summary said that Judge Zabel does ‘exhibit any of the polarized, misogynistic, racist or homophobic views many of the complainants attribute to Donald Trump.’

The statement continued to say that members of vulnerable group don’t need to worry the treatment they would receive in his courtroom.

The judge is looking forward to getting back to work and dealing with the cases in Hamilton, Ontario.

Suspension without pay is the most serious sanction the Ontario Judicial Council can impose other than complete removal from office.