Canadian ranger drives to hospital after being mauled by grizzly bear

A badly injured park ranger who was viciously mauled by a 500 pound grizzly bear in Canada managed to survive after driving himself to the hospital.

Jordan Carbery is still recovering in a Vancouver hospital after the female grizzly ripped off part of his scalp and half his ear outside his home in Bella Coola last Tuesday.

Carbery, who is an avid bear lover and often takes photos of them, said he grabbed his phone when he went to investigate a noise outside his home just before 5am on the morning of the attack.

The 50-year-old park ranger immediately spotted some cubs in a cherry tree.

Jordan Carbery, 50, (above prior) is still recovering in a Vancouver hospital after the female grizzly ripped off part of his scalp and half his ear outside his home last Tuesday

Carbery said he noticed something out the corner of his eye when one of the cubs fell out of the tree after a branch broke. 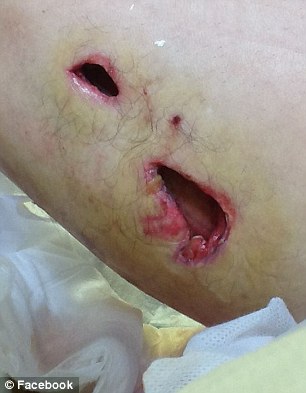 He posted several photos of Facebook of his injuries, including one showing how the grizzly’s canines left 3-4cm puncture holes (above)

‘She had her eyes locked on me and she was coming for me,’ he told The Canadian Press from his hospital bed.

‘I instantly turned and tried to get back to the house. I was only 40 feet out of the house. All of a sudden I just got tackled from behind and sent flying.’

The cub’s mother knocked him down and repeatedly bit him. She picked him up by the head and then the thigh.

He repeatedly kicked the grizzly in the face and punched her in the snout in a bid to escape.

The ranger dropped his cellphone in the process so was unable to call for help.

He eventually managed to make it back inside, tracked down his keys and raced back out to his car to drive to the nearest medical facility about 10 minutes away.

Carbery, who thought the bear may have torn him open and was concerned his organs may have been falling out, told himself not to pass out on the drive. 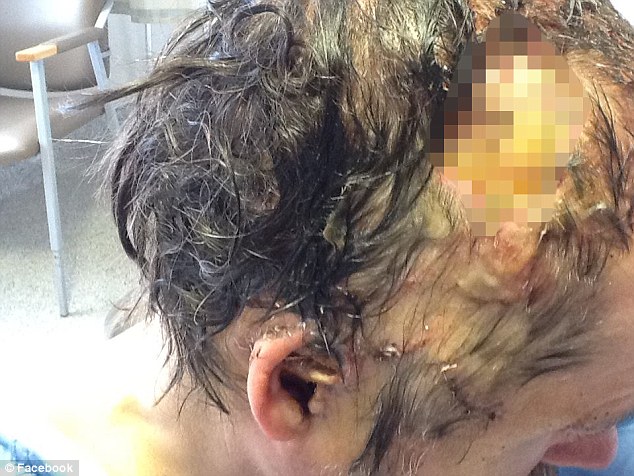 The park ranger had a portion of his scalp ripped off, as well as half his ear, when the bear latched onto his head last week

He is still recovering from his injuries and multiple surgeries.

‘She ripped off a portion of my scalp, half my ear, tore my pectoral muscle, gave me an umbilical hernia, and several deep canine teeth puncture wounds, plus several other wounds,’ he said.

He posted several photos of Facebook of his injuries, including one showing how the grizzly’s canines left 3-4cm puncture holes.

Inspector Len Butler of the Conservation Officer Society said the bear would not be destroyed because she was just defending her cubs.

The trees may have to be cut down or electrified because cherries attract bears, according to authorities.

Carbery, who said the attack was not the bear’s fault because he let his guard down, was glad to learn the animal wouldn’t be killed.