Canberra has been hit with an urgent Covid alert amid reports a Sydney man with low levels of the virus visited the nation’s capital while infected.

The man in his 40s from Baulkham Hills in Sydney’s north-west visited the ACT on June 14.

Health authorities are urging anyone who went to the National Gallery of Australia’s Boticelli to Van Gogh exhibition or gift shop from 12-1.45pm on Monday to get tested and immediately isolate.

The same advice applies to anyone who visited Via Dolce Pasticceria, a popular Italian dessert and pizza eatery, on the same day from 2.45-3.15pm.

The alert for Canberra comes as Sydney’s Covid exposure list continues to grow, with a popular bowling club and Harris Farm supermarket added on Tuesday night.

New South Wales has seen four new coronavirus cases in the last 48 hours, after a 40-day run without a single locally acquired infection.

Authorities are now scrambling to keep the lid on a potential outbreak, after a driver who transported international flight crew tested positive on Wednesday.

Health authorities are urging anyone who went to the National Gallery of Australia’s Boticelli to Van Gogh exhibition or gift shop from 12-1.45pm last Monday to get tested and immediately isolate 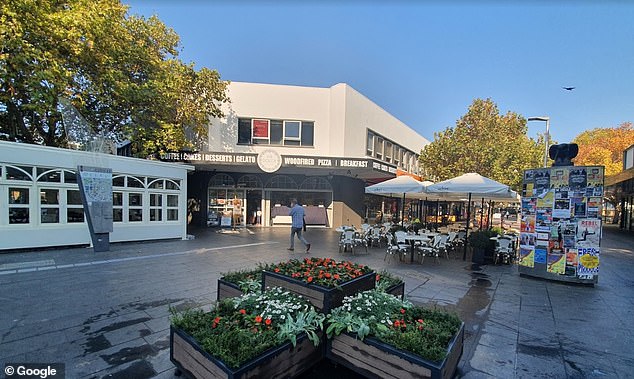 Anyone who visited Via Dolce Pasticceria, a popular Italian dessert and pizza eatery last Monday from 2.45-3.15pm is advised to get tested and immediately isolate 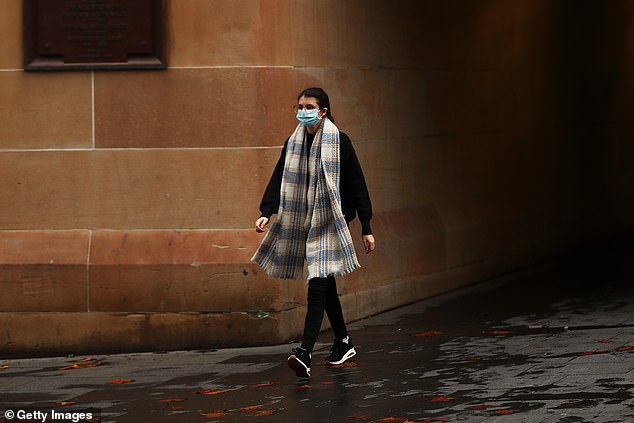 The Indian Delta variant of the virus is believed to spread faster than the Indian Kappa strain, with global health experts warning it could also be even deadlier 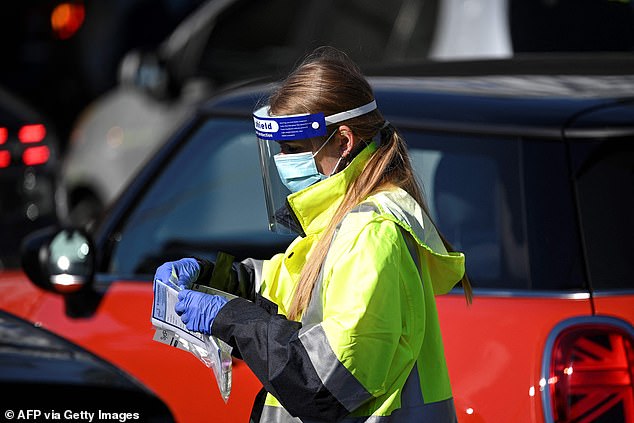 Testing queue swelled again on Thursday as yet more exposure sites were announced (pictured, the drive-through clinic in Bondi Beach)

The Bondi man’s wife has since also tested positive, as has a woman in her 70s who was at a Vaucluse cafe at the same time.

Dr Greg Kelly, from The Children’s Hospital at Westmead in Sydney, blasted NSW Health over poor protocols that allowed the driver to contract the virus while working.

‘This latest NSW leak 100% preventable. Australia, all that is standing between airborne #COVID-19 & frontline workers (and therefore you, grandma & the rest of us) is a flimsy surgical mask,’ he wrote.

‘People absolutely need to start losing jobs over this, and I don’t mean poor cafe and gym owners, I mean people with responsibility for quarantine.’

A man in his 40s in Sydney’s north-west, with no known links to other infections, has also tested positive – but authorities are still investigating whether he currently has the virus. 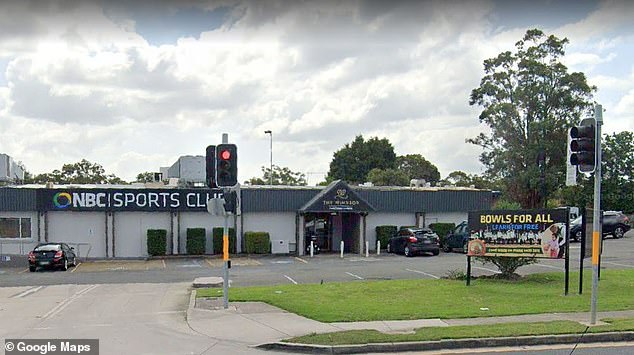 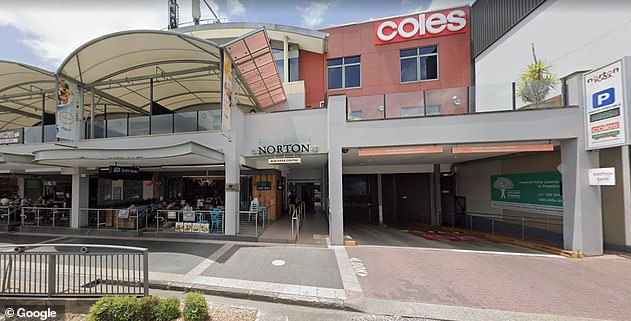 An infected man is believed to have shipped at the Leichhardt Harris Farm on Tuesday between 9.50am and 10.05am

Northmead Bowling Club was announced as an exposure site late on Thursday night, with anyone there from 3.30pm to 10pm on Sunday June 13 told to get tested and isolate immediately.

A further venue in the East Village Shopping Centre in Zetland has also been put on alert, with anyone who went to Lorna Jane in the centre on Monday between 11am and 1pm told to seek testing and isolate for two weeks, regardless of the result.

Bondi’s The Health Emporium is also now on the list.

However she stopped short of making face masks compulsory on public transport.

The Indian Delta variant of the virus is believed to spread faster than the Indian Kappa strain, with global health experts warning it could also be even deadlier.

Ms Berejiklian said she strongly recommended wearing a mask on public transport in the eastern suburbs of Sydney.

The announcement came as Tasmania, Victoria and Queensland announced anyone who had been to the exposure sites was not allowed to enter their state. 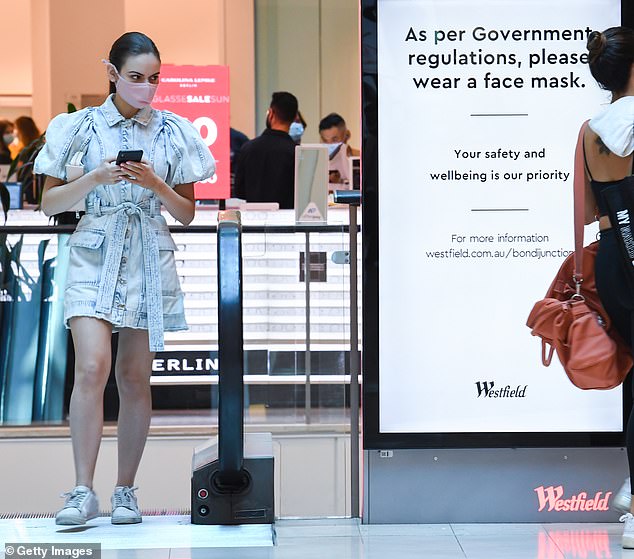 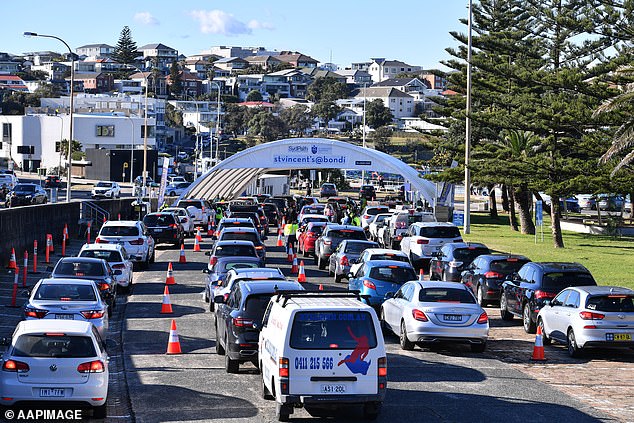 The island state announced Wednesday morning it would block all New South Wales travellers who had been to any of the hotspots and anyone who had visited a listed site since June 11 has to immediately get tested and isolate.

‘Anyone who is planning on travelling to Tasmania who has been to any of these high-risk premises at the specified dates and times will not be permitted to enter the state,’ Tasmania’s Director of Public Health Mark Veitch said.

Queensland Premier Annastacia Palaszczuk also said she would closely monitor the ongoing situation, with closed borders likely to occur given the previous decisions to quickly block residents from New South Wales from entering the state.

– Anyone who attended the following venue at the time listed must get tested and self-isolate for 14 days from the date they were at the venue, regardless of the result.

– Anyone who attended  the following venues at the listed times must call NSW Health on 1800 943 553, get tested and self-isolate until you receive further advice.

– Anyone who attended the following venue is a casual contact and must immediately get tested and self-isolate until a negative result is received. 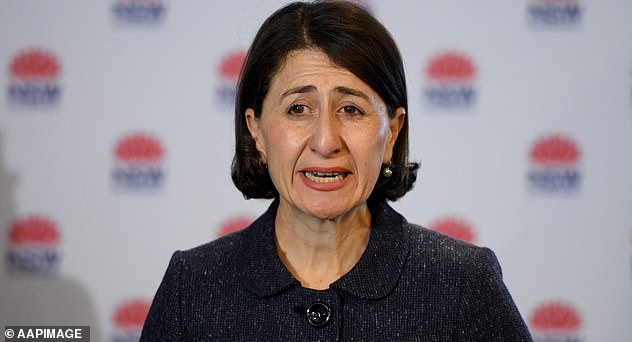 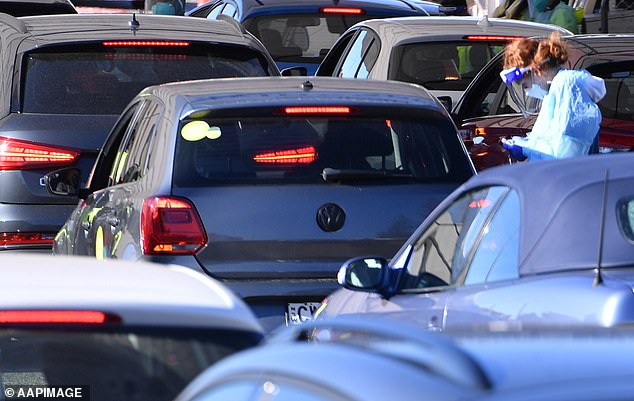 A hotel quarantine driver tested positive for the highly-contagious delta variant of coronavirus at the Bondi Beach testing facility on Wednesday. Pictured is a drive-through Covid-19 testing queue in Sydney 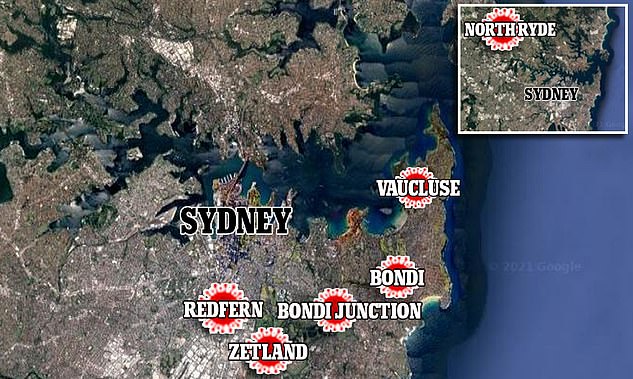 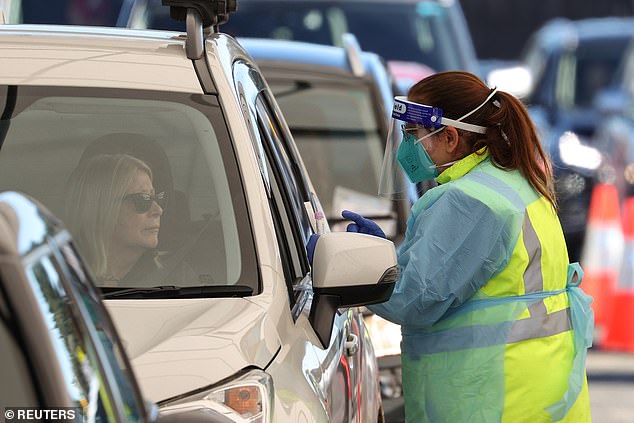 ‘In line with other jurisdictions, we will maintain restrictions on travel from Greater Melbourne for another seven days, and we strongly advise those planning travel to Greater Sydney to reconsider,’ she tweeted on Thursday morning.

Contact tracers are meanwhile racing to find Sydneysiders who visited various exposure sites including a David Jones store, a cinema, several cafes and restaurants and a bakery in the city’s east and north-west between June 11 and June 15.

The airport worker first attended the Belle Cafe in Vaucluse on June 11 between 9.15am-9.50am and returned on June 12, June 13 and June 14 at various times.

He also attended Sourdough Bakery at Westfield Bondi Junction between 12.40pm-1.10pm on June 11. 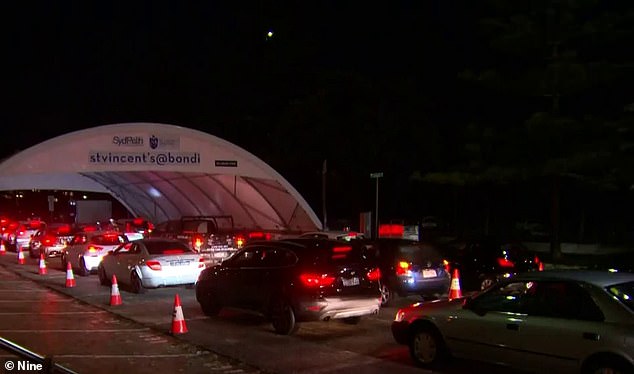 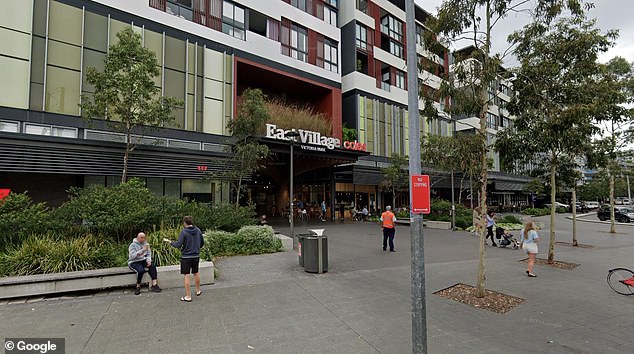 East Village shopping centre in Zetland, inner-Sydney, has been listed as a Covid exposure site – including its Coles supermarket – after an infected person visited on Monday

He returned to the shopping centre the following day where he shopped in David Jones between 11am-11.40am and Myer between 11.40am-12.15pm.

The infected man attended a movie screening of The Hitman’s Wife’s Bodyguard at Event Cinemas Bondi Junction on Sunday afternoon, June 13 for the 1.45pm screening.

Anyone who attended the 1.45pm screening in cinema 1 at the venue on June 13 is ordered to get tested immediately and self-isolate for 14 days, regardless of the result.

Other moviegoers who were at the cinema on Sunday between 1.30pm-4pm are ordered to get tested and self isolate until further notice from authorities. 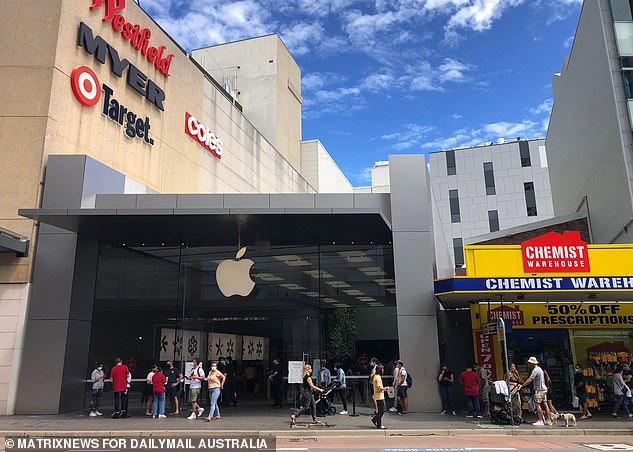 Authorities are scrambling to track down hundreds of shoppers he may have exposed the virus to at another popular Westfield shopping centre. Pictured: Westfield Bondi Junction 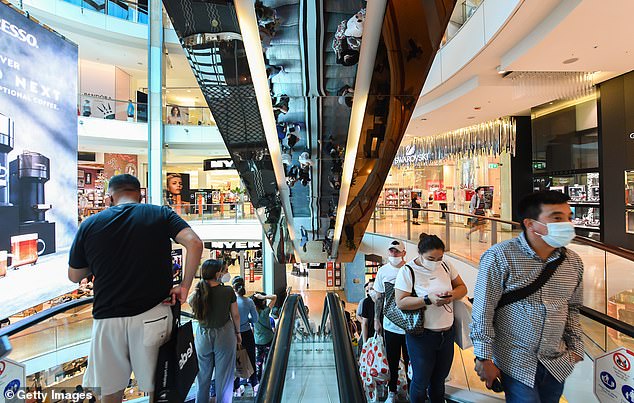 Customers wearing face masks at Westfield Bondi Junction. Contact tracers are racing to find hundreds of people who may have been exposed to the virus in the shopping centre

The most recent venue he visited was the Celeste Catering Macquarie Park Cemetery Cafe in North Ryde on June 15 between 1pm-1.20pm.

There are reports the frontline worker was not vaccinated, despite vaccines being offered to those working in the quarantine sector since March.