A mother-of-two given just nine months to live after her aggressive cancer spread throughout her body is still alive six years later because of a series of groundbreaking drugs.

Every time Michelle Amey’s disease advanced after her first diagnosis of skin cancer in 2010, a new drug became available to treat it.

In 2012, doctors secretly told Michelle’s husband Stuart, 41, that she did not have long left after tumours were discovered in her brain, liver and adrenal gland.

Her only option was to try a brand new drug – vemurafenib – which had not yet then been approved in the UK.

Thanks to this and other successive developments in cancer therapy, the 41-year-old’s disease has been kept at bay.

The medications she has tried are now all potentially available on the NHS – they are  recommended by National Institute for Health and Care Excellence (NICE) but individual CCGs have the final say.

Michelle Amey, from Dorset, was diagnosed with advanced skin cancer in 2010 – but it still alive 8 years on 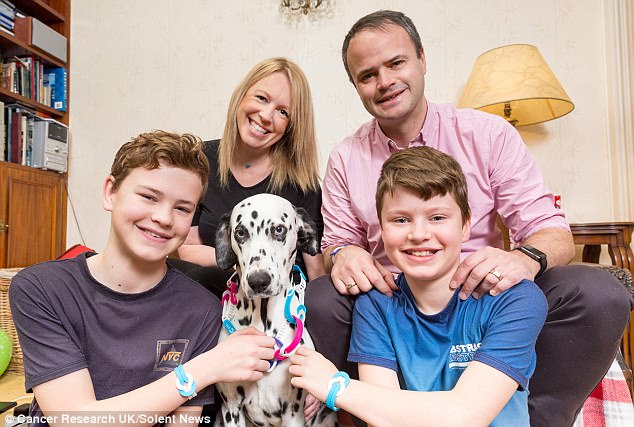 Mrs Amey, from Mudeford, Dorset, said: ‘Unbeknown to me, because I didn’t ever want to know what my prognosis was, my husband Stuart had asked to know the reality of the situation.

‘He was told I had nine months to live and he kept that secret until very recently.

‘In my mind there was no option but to try the new drug. It wasn’t particularly pleasant to endure and I had some side effects but it worked amazingly well.’

‘She desperately wants to see our boys grow up’

Mr Amey found it incredibly tough being unable to share the terrifying prognosis with his wife.

He said: ‘It was such a shock to be told that news but then knowing Michelle didn’t want to know her prognosis made it particularly difficult for me.

‘I had to convince her that trying the new drug was absolutely the best and only thing to do, but without letting her suspect I knew more.

‘It was a tough few years until I eventually told her that. Of course it came as a massive shock to her too and it was very emotional. 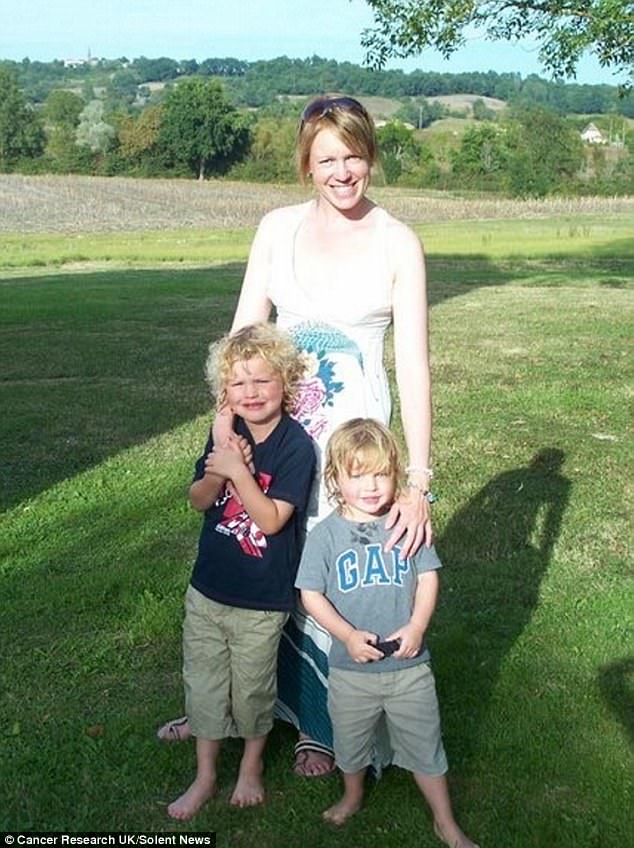 Two years after her first diagnosis, the cancer had spread to her brain, liver and adrenal gland

‘The fact that the medical team were able to offer Michelle anything that kept her with us longer than those nine months was just amazing.

‘They know she desperately wants to see our boys grow up. We wouldn’t be able to cope without her. She’s an incredibly brave, stubborn, determined and amazing woman and we are enormously grateful.’

‘The shock hit me’

Mrs Amey, a HR manager, was originally diagnosed with advanced melanoma in 2007 after a pink mark on her right thigh, which contained a black dot, became raised and started to bleed.

Having seen her GP several times about the concerning mark, she was referred to see a specialist.

She said: ‘Naively I never thought about it being cancer and when he said the word the shock hit me – I remember my body just went numb.

‘My youngest son George was just three months old at the time, and Charlie wasn’t quite three years, and here I was being told I had cancer.’ 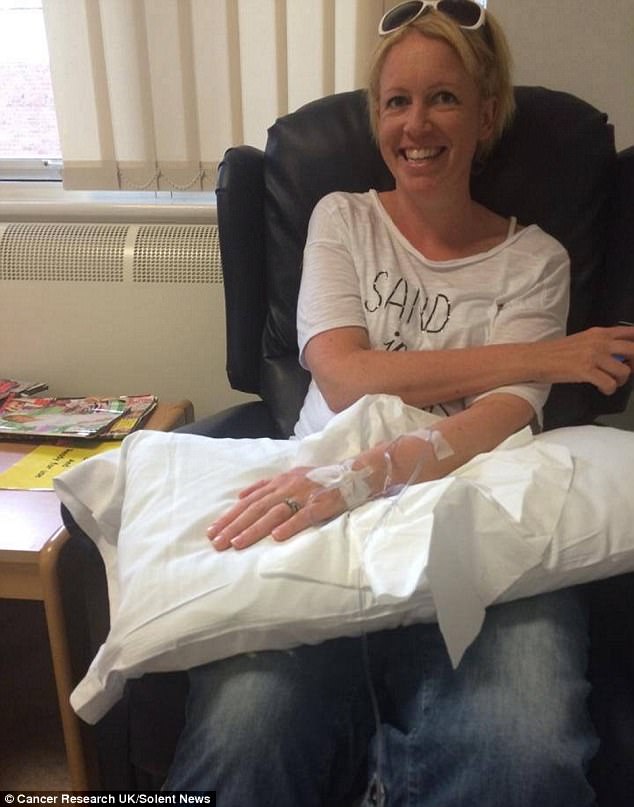 Mrs Amey underwent surgery, but was then told in 2010 that the cancer had spread to her brain and adrenal gland.

Experts say that with brain tumours like Michelle’s the average life expectancy is just six weeks, but surgery to remove the biggest tumours proved effective – but then  was diagnosed with liver cancer in 2012.

Oblivious to her nine-month life expectancy, Michelle was given two options – to do nothing, or try vemurafenib, an enzyme inhibitor for treatment of late-stage melanoma.

At the time the drug had not been approved by health watchdog NICE but the professor treating her was head of the Experimental Cancer Medicine Centre at the University of Southampton and so had access to it.

She said: ‘As far as I was concerned I knew I had to do whatever it took. I was not going to give up on beating this and I still feel that way now.’

‘I am determined to carry on fighting’

Mrs Amey’s success with vemurafenib was limited, however, and in the summer of 2014 it was clear the drug had stopped working when signs of the cancer starting to re-appear.

And so Professor Christian Ottensmeier then treated her with groundbreaking immunotherapy drug pembrolizumab – which worked for two years.

Then in November 2016, when that stopped working, she began a combination of new drugs dabrafenib and trametinib, which she continues to take today. 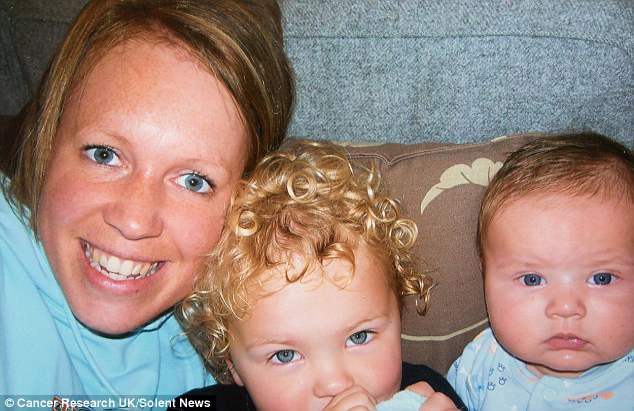 Vemurafenib – This is used to treat late-stage melanoma.

It is a targeted cancer drug (biological therapy) and is also known by its brand name Zelboraf.

Vemurafenib is used when melanoma has spread to other parts of the body, or that cannot be removed by surgery.

It was given the thumbs up for this purpose by the National Institute for Health and Care Excellence (NICE) in 2012.

Pembrolizumab – Also known by its brand name Keytruda, this is a type of immunotherapy.

It stimulates the body’s immune system to fight cancer cells.

NICE recommended it for routine NHS use in 2016 for adults with advanced lung cancer.

It is a treatment for some people with melanoma skin cancer as well as non small cell lung cancer (NSCLC) and Hodgkin lymphoma.

They are given to treat melanoma that has spread to other parts of the body or cannot be removed with surgery.

Dabrafenib and trametinib may also be given as part of a clinical trial to treat other types of cancer with a BRAF gene change.

Mrs Amey, whose sons are now 13 and 10, said: ‘I lost my aunt to melanoma in early 2000. At that point there was absolutely nothing they could do for her.

‘In 18 years this research has changed so much and I am so thankful.

‘My boys don’t know any different – they have grown up with mummy having cancer.

‘But I am here and able to watch them grow and enjoy precious family time with them and Stuart, who has just been amazing.

‘I do believe there is light at the end of the tunnel and I am determined to carry on fighting and never give up.’

‘Michelle is one of the very lucky people’

Mrs Amey, who will be supporting Cancer Research UK on World Cancer Day on February 4, thanked the charity for assisting in the progression of the life-saving drugs – just in time to help her as her cancer developed.

Professor Ottensmeier, who has been treating her at Southampton General Hospital since 2010, said: ‘Michelle is one of the very lucky people whose diagnosis has lagged only just behind the development and availability of new cancer treatments.

‘For us as a team, allowing a young mum to see her children grow up while she is also enjoying a good quality of life is a real privilege.

‘It is unfortunately not something we get to see in all of our patients.

‘Michelle has had a remarkable response – and both she and Stuart are quite remarkable people in the way they have and continue to manage what is an awful situation.

‘For a person to present with the brain metastases that Michelle did, the median survival we would expect to see is around six weeks.

‘To be here all these years on talking about it, it is simply amazing.’

The groundwork for vemurafenib was laid in laboratory tests carried out by Cancer Research UK, which also helps fund clinical trials and research at the University of Southampton and its hospitals.

A sensor worn on the thumbnail could prevent skin cancer by alerting wearers when they are getting too much sun exposure.

The battery-free UV Sense device detects radiation from the sun and changes colour to show how high levels are.

By measuring how long a wearer has been outside, the device, which is less than 2mm thick and 9mm in diameter, encourages users to reapply sun cream when scanned by a user’s smartphone.

UV Sense, which launched in the US last week, is due to be available in the UK in 2019. Its price is unclear. 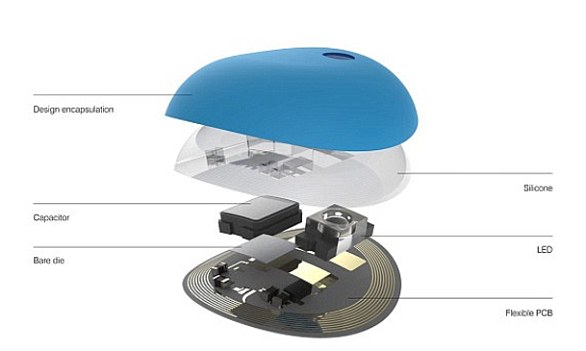 UV rays activate a sensor that collects UV absorption information in the capacitor, which stores electrical energy. This is transmitted to a smartphone that gives exposure information

Melanoma, which is the most serious form of skin cancer and often spreads, affects more than 15,000 new people every year in the UK. Its main cause is overexposure to UV light.

It also has a capacitor, which stores electrical energy.

UV rays activate the sensor, which collects UV absorption information in the capacitor.

The antenna then transmits this data to the app via the user’s smartphone antenna, which is activated by tapping or waving the phone close to the thumbnail device.

Measuring both UVA and UVB rays, the app gives a score that predicts the radiation’s intensity and gauges the risk of negative skin outcomes, such as sunburn and wrinkles.

Users can first enter information that describes their skin type to determine how sensitive to the sun’s rays they are.