A cancer survivor revealed a conversation she had with someone she was dating who thought he could catch her illness if they ‘got physical’.

Vix from Canada was dating a guy and decided to open up to him about being in remission for six-and-a-half years after her scary battle with cancer. But after she told him about the illness, her date demanded proof he wasn’t going to ‘catch’ the cancer.

‘We met on a dating app, and had dated a year before, stopped dating, and then he reached out again to give him another chance, and we had just gone out again once,’ Vix told Bored Panda.

Insane: A cancer survivor named Vix from Canada shared a text conversation with a former boyfriend who thought he could catch her illness even though it is not contagious (stock) 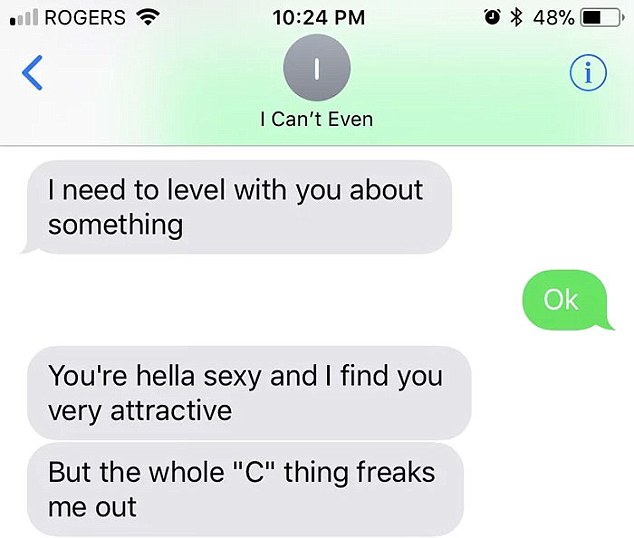 Bizarre: After Vix revealed she was six-and-a-half years in remission, the man said the idea about her having cancer freaked him out

Understanding: Vix was nice about his concerns at first because she thought he was just scared

She added: ‘This was the first time [I met] someone [who] thought they could catch it, but I’ve had others who just wouldn’t call or text back once I’ve told them.

In a series of text messages, the man she was seeing asked if he could see Vix’s family doctor to confirm the cancer was not contagious.

‘I need to level with you about something,’ the man wrote at the beginning of the bizarre conversation. ‘You’re hella sexy and I find you very attractive. But the whole “C” thing freaks me out.’

Later into the conversation, Vix told the man that she understood cancer was a ‘scary topic’ for them to talk about.

But then the real bomb was dropped when the man revealed he though he could potentially ‘catch’ the cancer despite it not being contagious.

‘If I could talk to a doctor or something,’ he said. ‘Maybe you have a family doctor. I dunno. Hope you’re not offended, I just need to know it’s safe for us to be physical.’

Vix then tried to explain that cancer wasn’t the same as a sexually transmitted disease where someone can catch it by being physical with others. But the man was unconvinced. 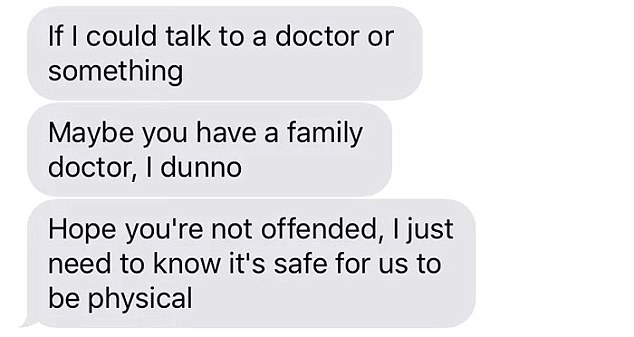 Shocking: The man then admitted to wanting to meet with a doctor first to confirm the couple could ‘be physical’ together 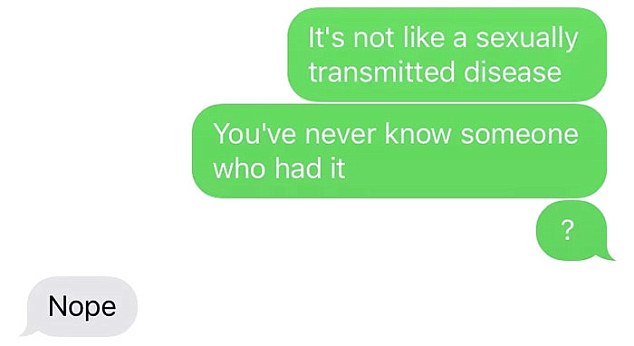 Did you know? Vix later clarifies that cancer is not a sexually transmitted disease, so the man should have no fear of ‘catching’ anything

‘I just want to know it’s safe,’ he said. ‘I need to hear it from a doctor, preferably yours.’

Vix even went as far as sending him a page from the American Cancer Society about how the illness is not contagious.

After he continued to prod for a meeting with her doctor, Vix got mad because she felt it was an invasion of privacy for him wanting to know more about her medical history.

‘I’m really private about my medical stuff for the most part,’ she wrote. ‘I’m sorry that hearing it from me isn’t enough.

But the man still did not understand why he couldn’t have a conversation with her doctor since it could ‘affect’ him.

Jaw-dropping: The man kept asking to speak with Vix’s doctor even when she sent articles about how cancer is not contagious

Not happening: Vix told the man that he was not going to meet with her doctor about the matter 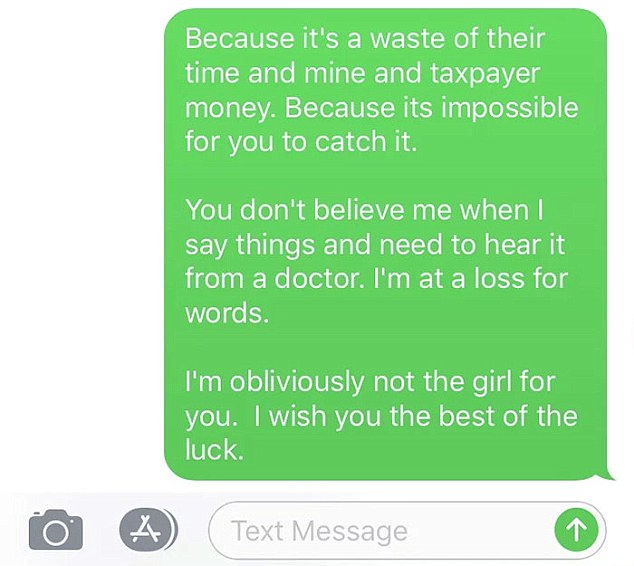 Done: After a long conversation, Vix finally ended the relationship with the man because he refused to back down about ‘catching’ her cancer

He responded: ‘I understand it’s a sensitive subject, but you need to be open about it if it affects the other person.’

The man’s inability to understand cancer is not contagious was the final straw for Vix who decided it was best to just end the relationship with him.

‘You don’t believe me when I say things and need to hear it from a doctor,’ she wrote in the final text message.

‘I’m at a loss for words. I’m obviously not the girl for you. I wish you the best of the luck.’

Vix revealed to Bored Panda that she blocked and deleted the man from her phone after the conversation. But she doesn’t wish him ill will despite his lack of knowledge about cancer.

The bizarre conversation did make her realize he was not the man for her in the end.