Cane toad tadpoles have turned to CANNIBALISM in Australia because there is a lack of food supply for the more than 200 million frogs in the region, study finds

Australian cane toads have turned to a life of cannibalism – a behavior rarely seen in the species in its native South America – in order to survive due to the overwhelming competition for food on the continent.

A team of scientists from the University of Sydney found cane toad tadpoles, first introduced to Australia in 1935, are feasting on cane toad eggs and hatchlings across the continent and are 2.5 times more likely to exhibit this behavior than those living in South America.

Researchers suggest this is due to the overwhelming number of tadpoles born in Australia, with a population having surpassed 200 million, along with the fact they have developed a taste for toxins put into the fertilized egg by the mother.

‘Cannibalism is a way for these tadpoles to reduce competition within their ponds (and improve their own chances of successfully reaching metamorphosis),’ Dr Jayna DeVore, lead author of the study, told DailyMail.com via email.

‘When tadpoles can smell that eggs are hatching in their pond, they rush over and cannibalize the eggs and young hatchlings.

‘This way, they both get a meal and reduce the number of tadpoles they will be competing with for food later on.’

This cannibalistic behavior, however, has also produced an evolutionary response among hatchlings, which are speeding up their development in order to no longer be vulnerable against older tadpoles.

Researchers suggest this is due to the overwhelming number of tadpoles born in Australia, along with the fact they have developed a taste for toxins put into the fertilized egg by the mother

Approximately 100 cane toads were introduced to Australia 86 years ago.

Farmers hoped to use the amphibians to control beetles wreaking havoc on sugarcane plants, but the natural pesticide failed and just kept multiplying, eventually reaching roughly 200 million cane toads in 2019.

The frogs were able to thrive in their new home due to their toxic skin that kept predators way, so without a predator the toads began to take over.

The study set out to see how cane toads were able to survive the harsh Australian environment, which leaves them competing for food and that is when researchers proposed cannibalism. 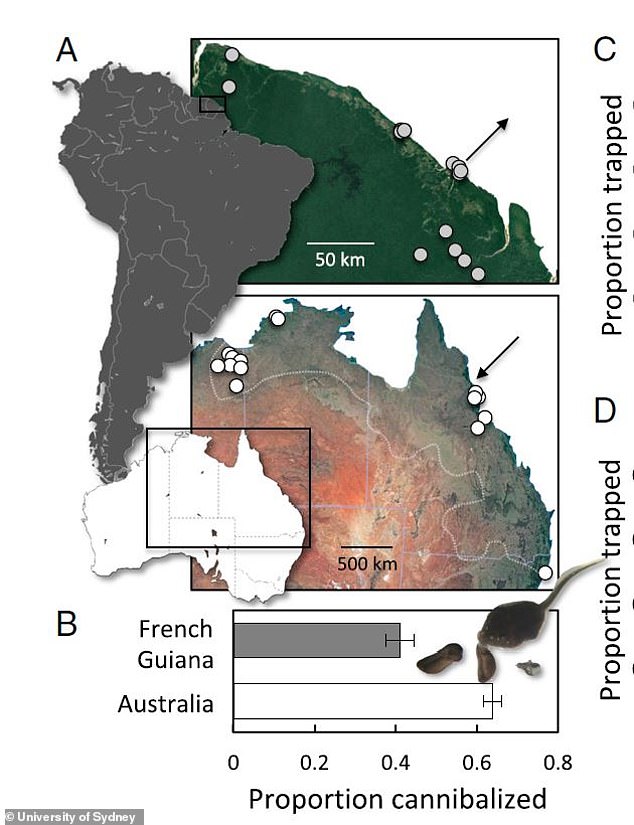 A team of scientists from the University of Sydney found cane toad tadpoles are feasting on cane toad eggs and hatchlings across the continent and are 2.5 times more likely to exhibit this behavior than those living in South America

Since the behavior is found widely across Australia, researchers wanted to see if it was found among those still live in their native land.

The tadpoles from Australia were almost 30 percent more likely to enter the container with hatchlings, whereas those from South America showed no preference.

Australian tadpoles were also 2.5 times more likely to eat a hatchling compared to those originally from South America.

A population of 43 tadpoles and 22 hatchlings were used in the study, in which exposed 10 hatchlings to one tadpole for a 24-hour period.

They offered the tadpoles an empty container, or a container with a tadpole hatchlings in it. 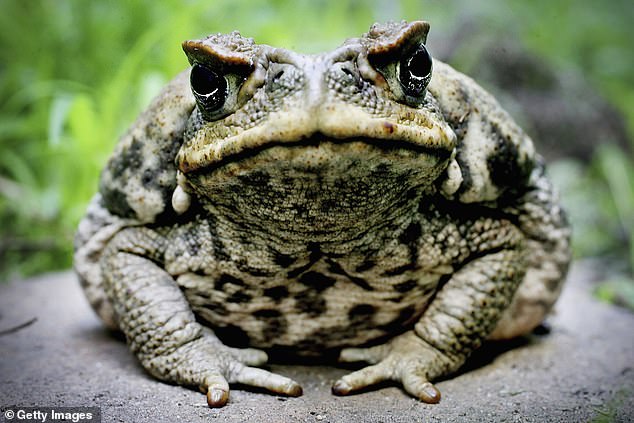 Pictured is an adult cane toad in Australia

‘Another amazing thing that we found is that the cane toads in Australia have also evolved new ways to defend themselves against cannibalism,’ said Dr DeVore.

‘They not only develop more quickly during this vulnerable egg and hatchling period (thereby reducing their window of vulnerability from ~5 days to ~4 days), they are also more likely than native range toads to be able to actually smell when cannibals are around and accelerate their development in response.

‘Once the hatchlings develop into tadpoles, other tadpoles can no longer cannibalize them. So if cannibals are looking for you, the faster you can become a tadpole, the better!’

The study was recently published in the scientific journal PNAS.