Thousands of marijuana fans have flocked to Hyde Park this afternoon to smoke in the sunshine on 420 Day – in full view of police.

Marijuana lovers unite for the rally every year on April 20, the date corresponding to the code name 420, and are gathering to demand the drug is decriminalised.

Royal Parks staff and police are expecting more than 15,000 people to gather in the central London park to mark the occasion, with revellers seen shirtless in the warm weather, many of them smoking rolled-up cigarettes.

Scotland Yard said there had been no arrests so far, adding that the crowd were ‘well-natured’ and saying a ‘proportionate’ police presence had been in place. 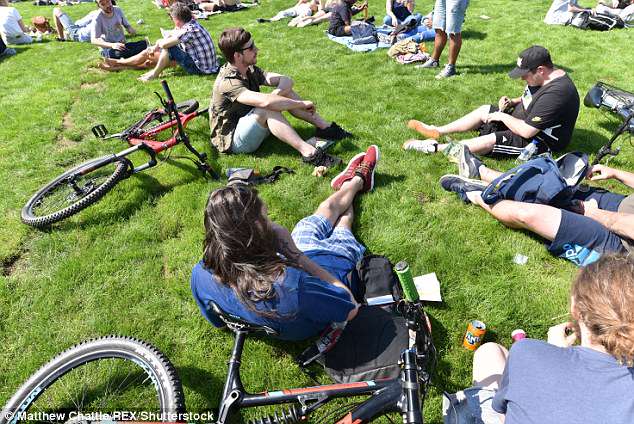 Already 15,000 are believed to attend according to the Facebook page for the event, which is the biggest rally in the UK 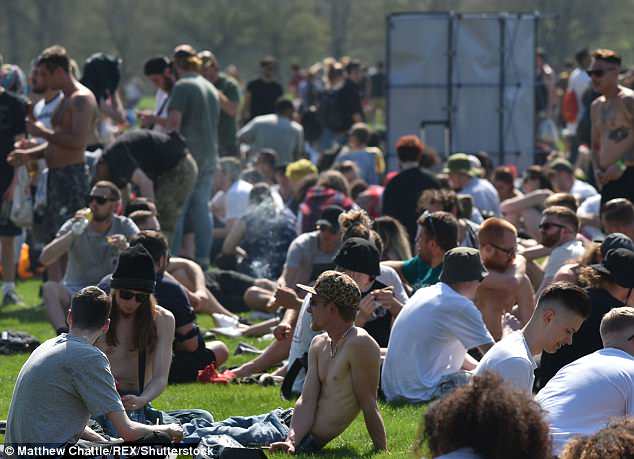 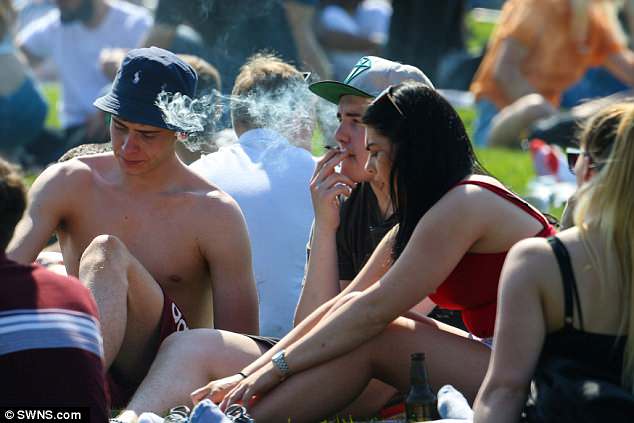 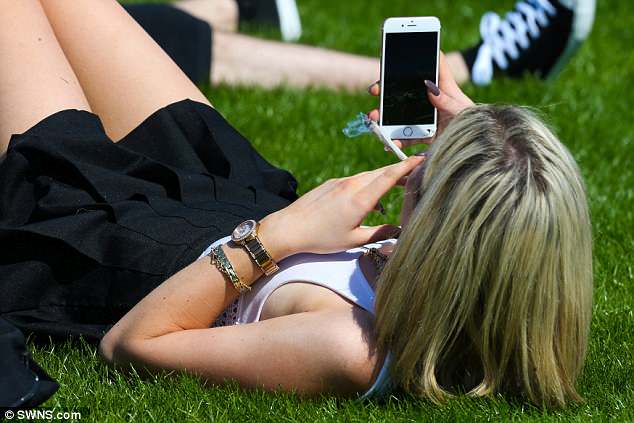 Several thousand cannabis users and those who support them gather in Hyde Park, London 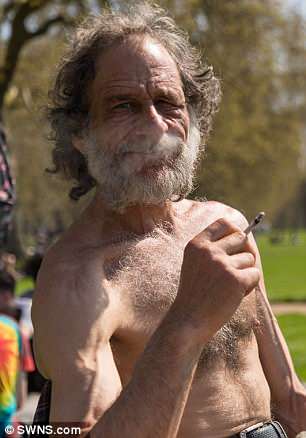 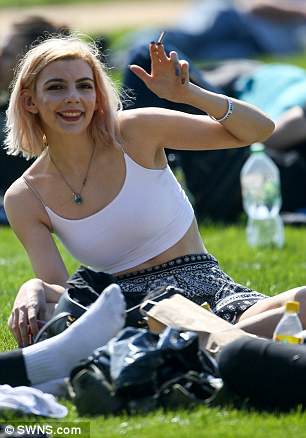 A celebration for all ages: 420 is a rally to highlight awareness of the plant and its benefits

The annual tradition is said to have started in America because April 20 in the U.S. date format reads as 4/20.

There are many stories behind the significance of the number in stoner culture, but the most common is that 4.20pm is touted as the best time of the day to start smoking the narcotic.

But in London, around 5,000 people gathered way before the ‘allotted’ time, and many sparked up suspicious-looking cigarettes – some in full view of police.

Some revellers were seen shirtless, soaking up the sun while enjoying rolled-up cigarettes.

There are drug and cannabis-related rallies worldwide, but Hyde Park is known as the largest in the UK.

Gardeners from the Royal Park will also have to tidy up the venue in time for a 41-gun salute to mark the birthday of The Queen, April 21st, at midday.

Their 40 gardeners expect to get the Grade-I listed park – which covers a massive 350 acres – tidy by 10am.

There were many Facebook groups set up dedicated to the ‘420 rally’ in the park, on which around 10,000 people said they were attending – although numbers are expected to rise. 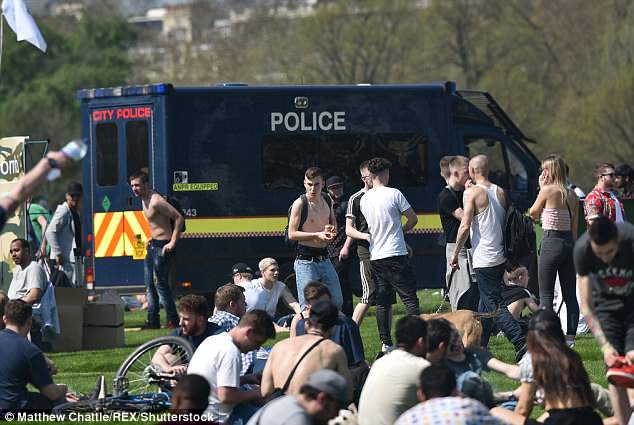 A large police presence will be at Hyde Park, London for the event and random police searches are expected 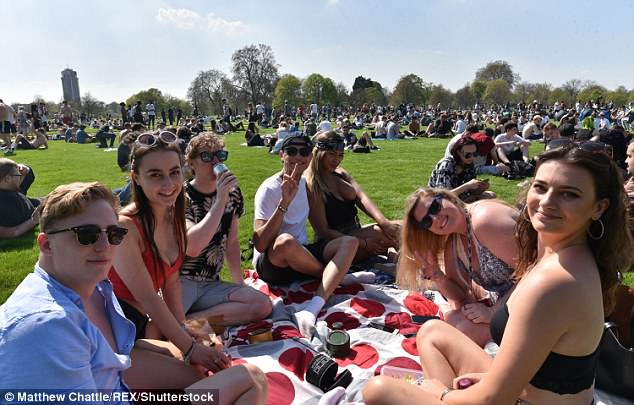 Rallies celebrating weed are to take place across the world today 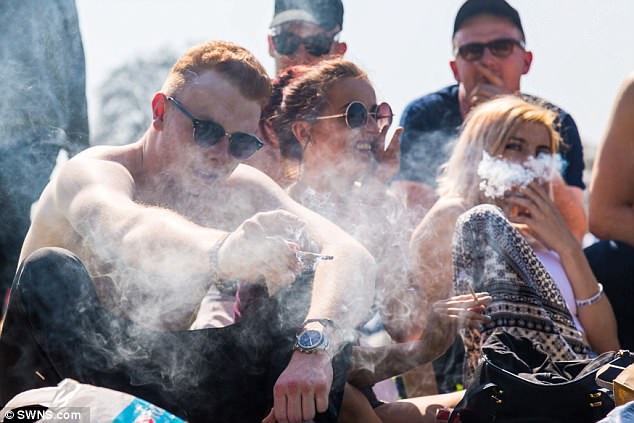 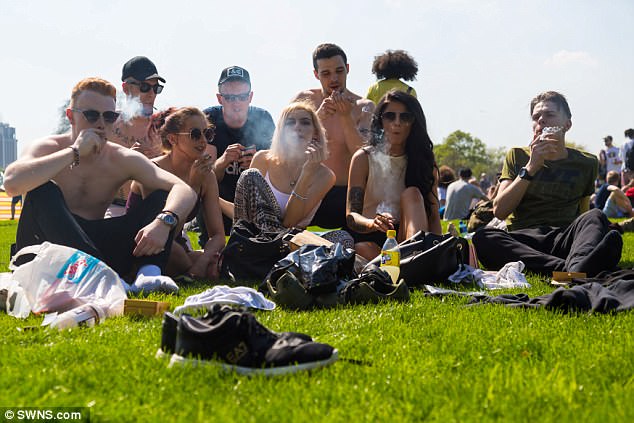 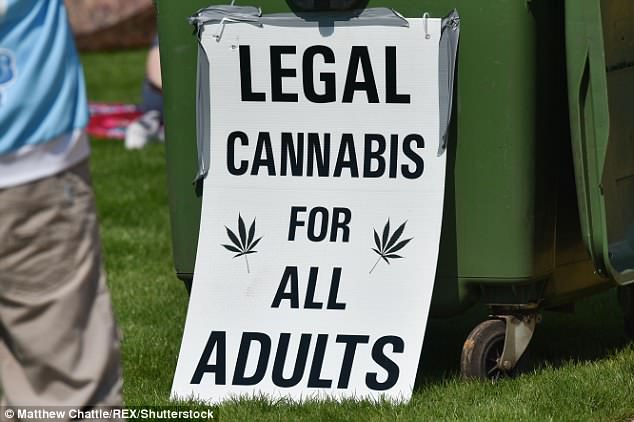 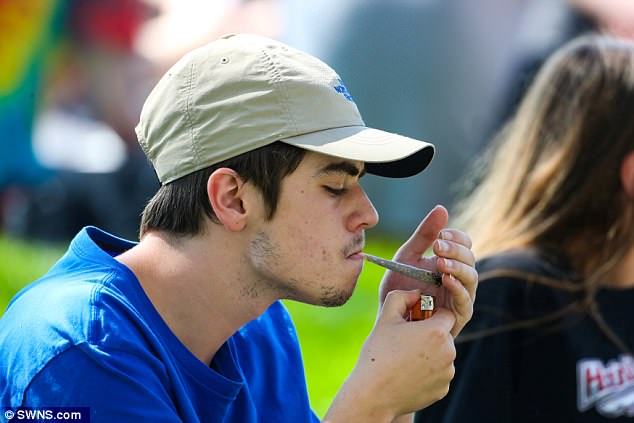 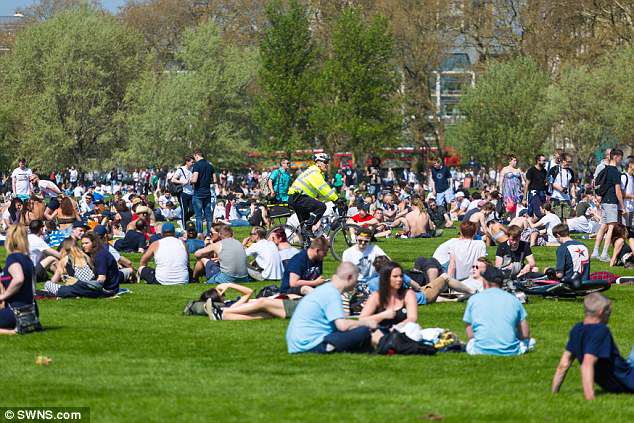 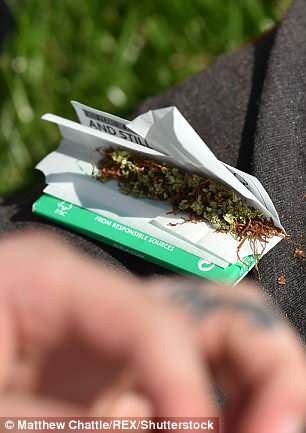 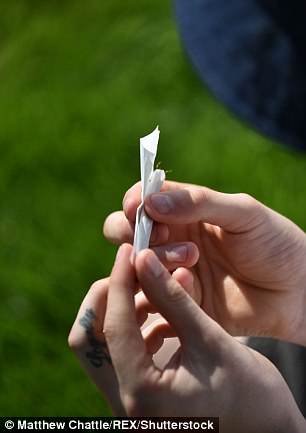 The event is held every year on April 20, the date corresponding to the nickname 420 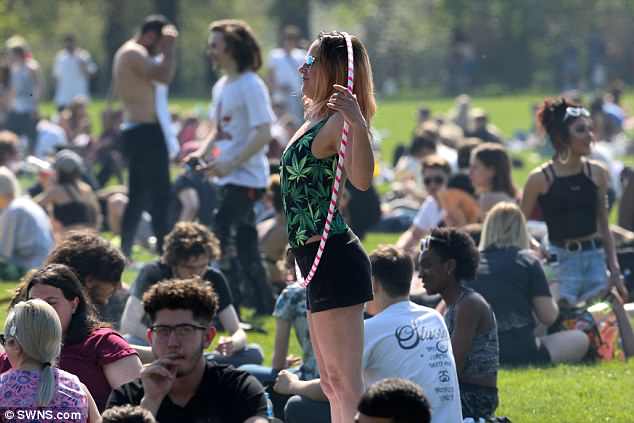 According to theories, the origin of 420 is said to have come from the penal code that Californian police used to categorise cannabis cases

What is 420 Day and where does the name come from?

Rallies celebrating weed are to take place across the world today, the date corresponding to the name 420.

According to theories, the origin of 420 is said to have come from the penal code that Californian police used to categorise cannabis cases.

Others say that in 1971, students at a Californian high school are believed to have organised to meet at 4.20pm to find a plot of land to plant a cannabis plant.

Police have warned that officers will be present at events across the world and that the usual drug laws will apply.

There will be rallies worldwide including in the Netherlands, Canada and the United States. The biggest UK event celebrating the festival is at London’s Hyde Park.

Last year 12 people were detained by police at the rally. The 2015 pro-cannabis rally saw more than 50 people arrested, despite claims that the event was peaceful.

In the UK cannabis users could go to jail if caught although traffickers and dealers are more likely to receive prison sentences.

A Met Police officer on a bike was spotted riding through the sitting crowds – next to people who appeared to be smoking items affectionately nicknamed ‘Camberwell carrots’ due to their large size and shape.

A parks source said: ‘This is the busiest afternoon of the year for us, and it leads into the busiest morning of our calendar year too.

‘Every year these people gather and do what they do, and then they leave.

‘We start cleaning up at 5am the next day because we’ve got a massive event at midday and everything needs to be spotless.’

The 2015 pro-cannabis rally saw more than 50 people arrested, despite claims from organisers that the event was peaceful.

Images captured the moment four officers took down and restrained a tracksuit-wearing man near the entrance to the park – just yards from a prominent police sign which read: ‘Possession of cannabis is illegal’.

And last year 12 people were detained by police at the rally.

Police said that officers will be present and that the usual drug laws will apply on the day. Random searched are expected.

A police spokesman said: ‘We are aware of a planned event due to be held in Hyde Park at 12pm on Friday, 20 April.

‘A proportionate policing plan will be in place.

‘Legislation under the Misuse of Drugs Act 1971 will be enforced as it would be under normal police conditions during this event.’ 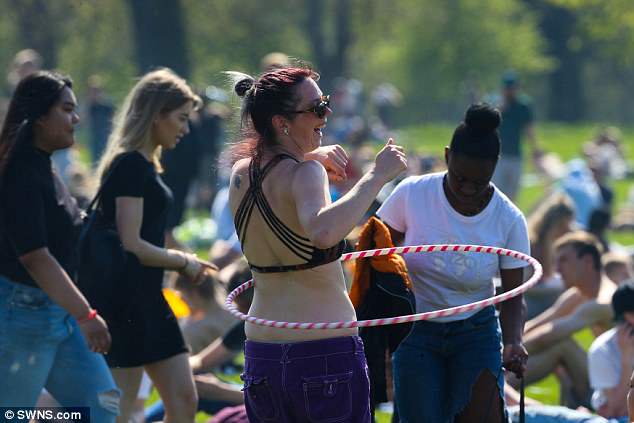 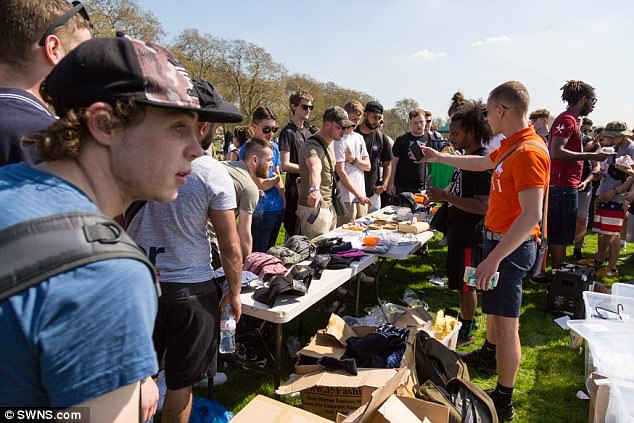 There were many Facebook groups set up dedicated to the ‘420 rally’ in the park, that had thousands of people say they were attending 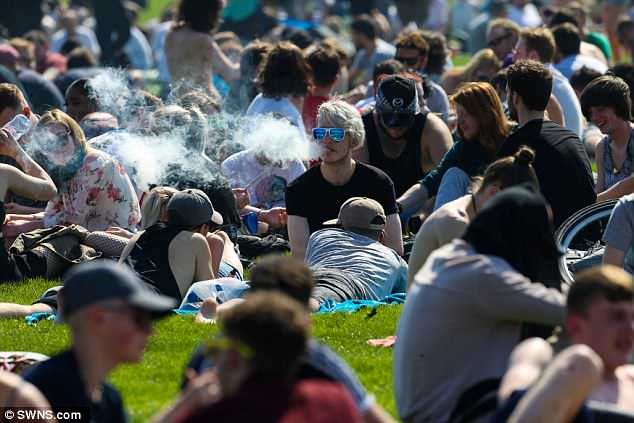 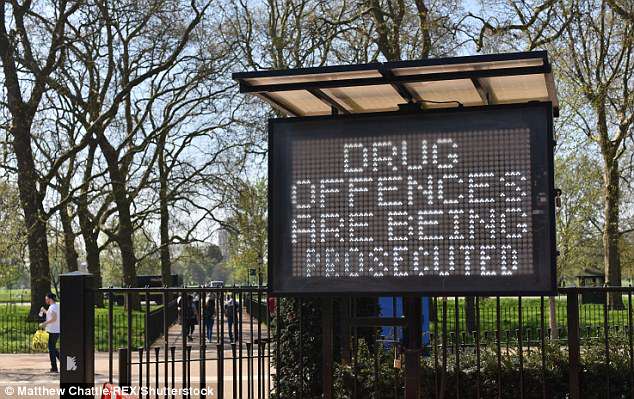 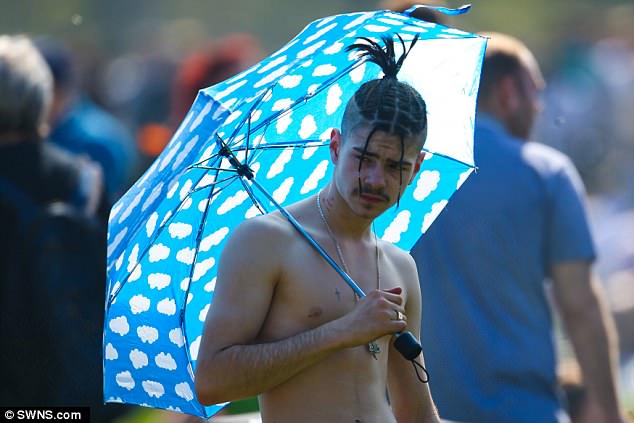 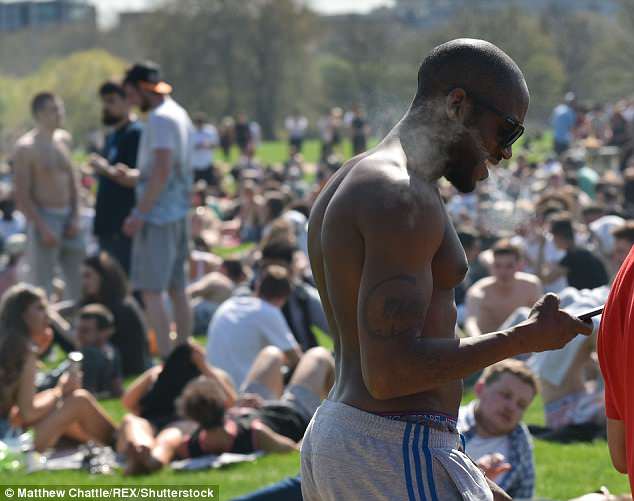 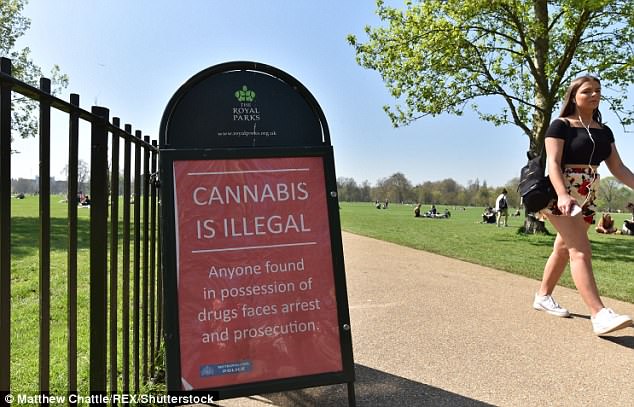 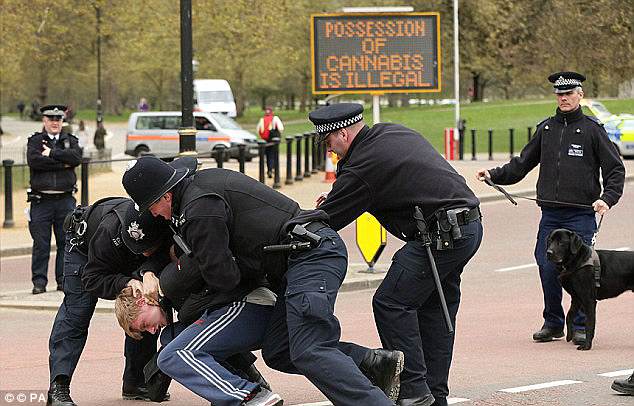 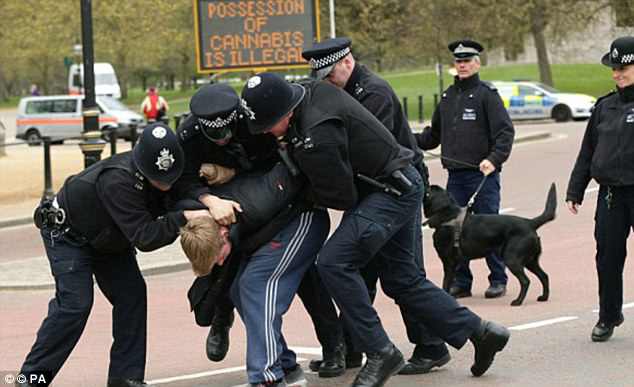 The pro-cannabis protester was pushed to the ground at the 2015 cannabis rally, just yards from a police sign reading: ‘Possession of cannabis is illegal’