Canola oil has been heavily marketed as a healthy choice because it is low in saturated fat.

But a new study suggests the trendy kitchen staple could worsen memory loss and learning ability in Alzheimer’s patients.

It may also increase the build-up of plaques in the brain, a hallmark of the degenerative disease.

And despite its seemingly wholesome profile, researchers discovered it caused weight gain.

The findings suggest for the first time that long-term consumption of canola oil is not beneficial to brain health.

‘Canola oil is appealing because it is less expensive than other vegetable oils, and it is advertised as being healthy,’ said senior study investigator Professor Domenico Praticò, director of the Alzheimer’s Center at Lewis Katz School of Medicine at Temple University (LKSOM) in Philadelphia.

‘Very few studies, however, have examined that claim, especially in terms of the brain.’

Dr Praticò and his colleague Lauretti had previously investigated the effects of extra-virgin olive oil on brain health on mice.

In that study, they found that rodents genetically modified to have Alzheimer’s that were fed a diet enriched with olive oil displayed memory improvement.

They also had reduced levels of amyloid plaques and phosphorylated tau – these are responsible for the formation of neurofibrillary tangles, the prime suspects in cell death and tissue loss in the Alzheimer brain.

For their latest work, they wanted to determine whether canola oil is similarly beneficial for the brain.

The animal model was designed to mimic Alzheimer’s in humans, progressing from an asymptomatic phase in early life to full-blown disease in aged rodents.

The mice were divided into two groups at six months of age, before they developed signs of Alzheimer’s. One group was fed a normal diet, while the other was fed a diet supplemented with the equivalent of about two tablespoons of canola oil daily.

After 12 months, they were assessed. One of the first differences observed was in body weight – animals on the canola oil-enriched diet weighed significantly more than mice on the regular diet.

Examination of brain tissue from the two groups of mice revealed that canola oil-treated animals had greatly reduced levels of amyloid beta 1-40, a peptide which protects neurons from damage.

They also showed increased formation of amyloid plaques in the brain.

The damage was accompanied by a significant decrease in the number of contacts between neurons, indicative of extensive injury.

Canola is not equivalent to other oils

‘Even though canola oil is a vegetable oil, we need to be careful before we say that it is healthy,’ Dr Praticò said.

‘Based on the evidence from this study, canola oil should not be thought of as being equivalent to oils with proven health benefits.’ 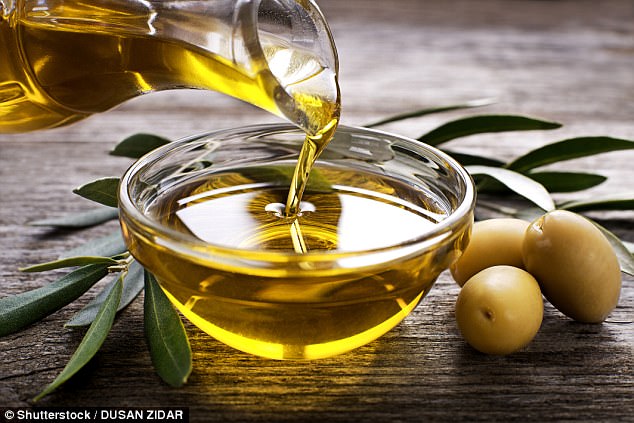 The researchers said the next step is to carry out a study of shorter duration to determine if short-term use of the oil causes damage. A longer study to investigate how extensive the harm is would be useful too.

‘We also want to know whether the negative effects of canola oil are specific for Alzheimer’s disease,’ Dr Praticò added.

‘There is a chance that the consumption of canola oil could also affect the onset and course of other neurodegenerative diseases or other forms of dementia.’

The study was published in the journal Scientific Reports.

VERDICT OF PROFESSOR OF NUTRITION ON CANOLA OIL

Canola oil is rapeseed oil that has been bred to significantly reduce the undesirable elements, namely, the bitterness and high omega-9 levels.

Dr Guy Crosby is an adjunct associate professor at the Harvard School of Public Health.

He addressed concerns about canola oil is an ‘ask the expert’ feature on the university’s website.

He said: ‘Canola oil is generally considered a “healthy” oil because it is very low in saturated fat (7 percent). Like olive oil it is high in monounsaturated fat (63 percent).

‘In addition, canola oil contains significant amounts of phytosterols  that reduce the absorption of cholesterol into the body.’

However, he explains that as with many highly processed food products, there are concerns about the safety of canola oil.

‘Most canola is chemically extracted using a solvent called hexane, and heat is often applied which can affect the stability of the oil’s molecules, turn it rancid, destroy the omega-3s in it, and can even create trans fats,’ he wrote.

Trans-fats that have been linked with significant health problem. They are known to trigger systemic inflammation and raise the risk of developing heart disease and stroke. They are also associated with a higher chances of developing type 2 diabetes.

Professor Crosby notes that ‘cold-pressed’ canola oil exists but is very expensive and hard to find.

‘Virgin and extra virgin olive oils are good choices,’ he advises. ‘There is ample evidence they are healthy alternatives. They are not extracted with solvent and are not deodorized.’