Greece has never been more popular for holidaymakers, but which resort should you choose for next year’s summer break? Why not sample four very different islands during a long-weekend mini-cruise – and dip into Turkey too…

Sail from Athens across the sparkling Aegean Sea on a Friday afternoon aboard Celestyal Olympia, which fizzes with fun, on the start of a great-value long weekend.

The itinerary is jam-packed, but this trip also allows plenty of time for sunbathing, spa treatments and sumptuous lunches as you sail between destinations during the hottest hours of the day. There is a gym aboard, a library, plus a kids’ club if children or grandchildren are joining the fun.

Instagram heaven: While in Mykonos, look upwards for your first sight of the island’s ionic windmills, with the white buildings contrasted against colourful skies

Your first port of call is an island famous for its nightlife, so enjoy a taster and stroll ashore in Mykonos Town for a few hours to mingle with the fashionistas until the ship sets sail again at 11pm. Wander through crooked alleys, deliberately constructed like a maze to confound pirates in days gone by. 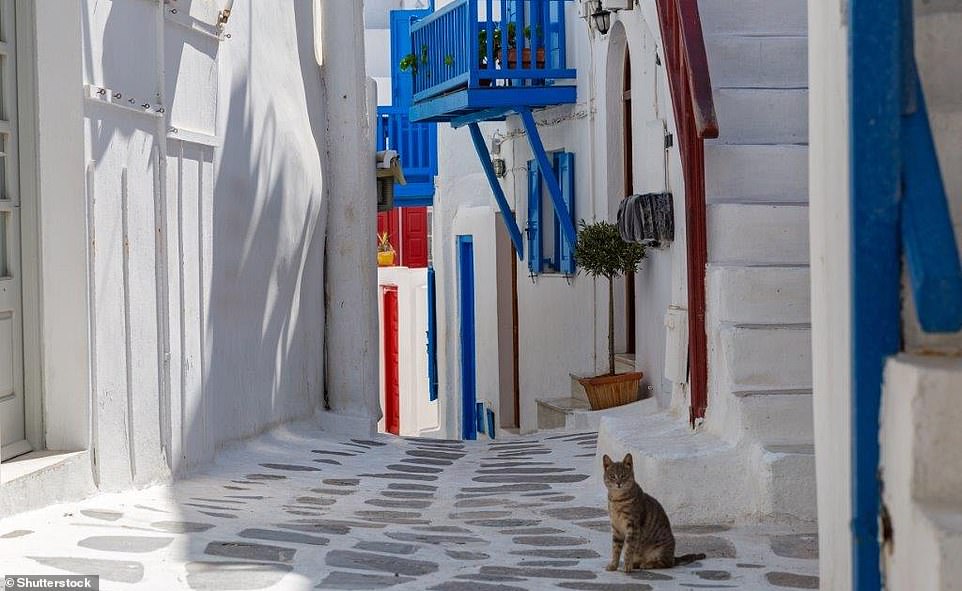 Don’t miss: An early evening cocktail – try an ouzito, the Greek answer to a mojito. Ouzo is shaken with crushed mint leaves, lemon juice and sugar and poured into glasses that have been filled halfway with ice cubes. Enjoy on a comfortable couch outside whitewashed bar Jackie O’ on the waterfront in Mykonos Town before the clubbers descend.

Taste this: A scoop each of home-made pistachio ice cream and watermelon sorbet from I Scream in Mykonos Town – a sensational combination of colours and flavours.

Downtime aboard: Book a soothing massage using blended essential Greek olive oils in the Sana Wellness Centre on Deck 5 (€79 for 45 minutes – about £70). You’ll be glad you bagged an appointment after walking your legs off touring on shore. 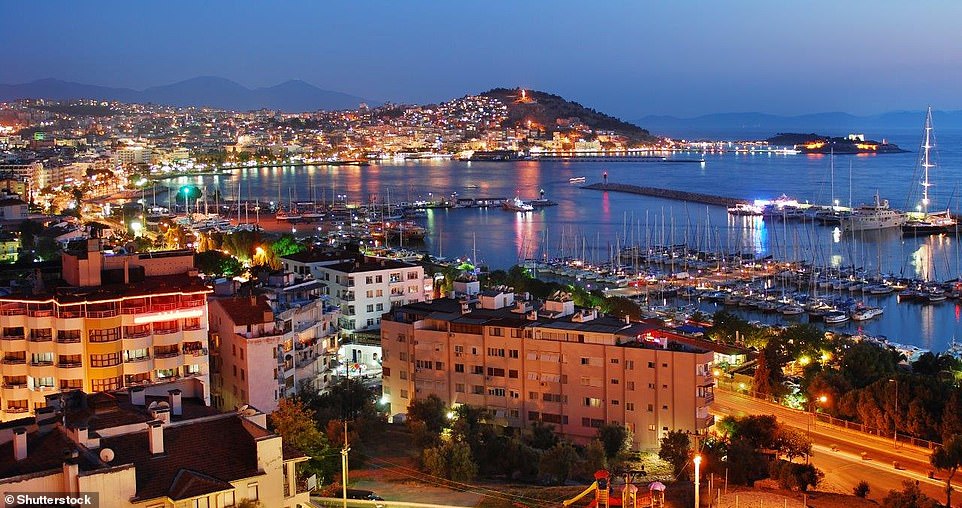 The package-holiday resort of Kusadasi on the Turkish coast is a paradise for shopaholics, with its stores filled with good-value local leather goods and handbags

The package-holiday resort of Kusadasi on the Turkish coast is a paradise for shopaholics. It’s filled with good-value local leather goods and handbags (and watches at suspiciously cheap prices, hilariously touted as ‘genuine fakes’). But it is also the gateway to the astonishing ruins of Ephesus, an Ancient Greek settlement that became the fourth-largest city in the Roman Empire.

Don’t miss: Selfies in front of the magnificent Library of Celsus, completed in 117 AD to house 12,000 scrolls, at the end of a marble-paved avenue in Ephesus. Its soaring two-storey facade has Corinthian columns and niches containing statues of the female figures of the Four Virtues: Wisdom, Goodness, Thought and Knowledge.

Taste this: A strong, sweet Turkish coffee served with some hazelnut Turkish delight at a seaside cafe in Kusadasi.

Downtime aboard: Join the Greek language class in the Selene Lounge and impress market stallholders with your haggling skills. 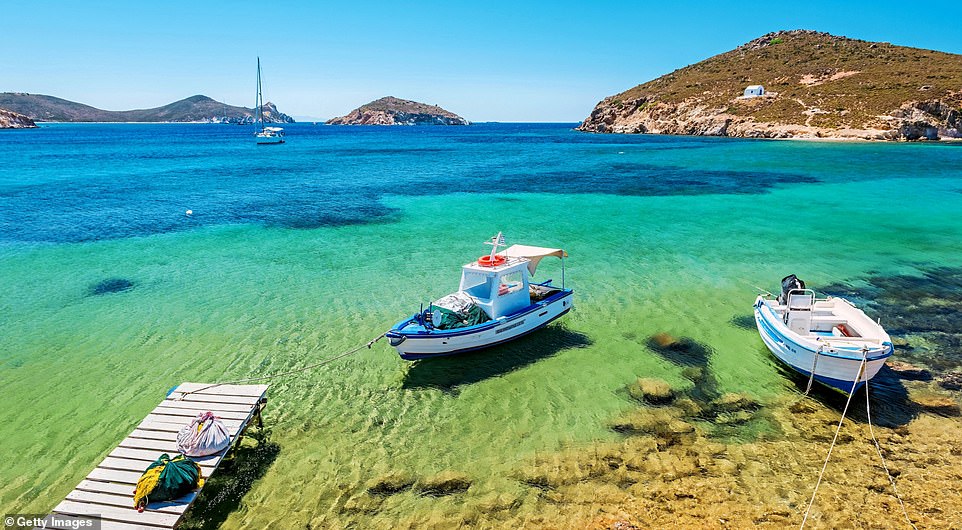 Wide blue yonder: With no airport (and it’s a long ferry ride from Athens), Patmos has escaped large-scale tourism, so exudes a tranquil air

With no airport (and it’s a long ferry ride from Athens), Patmos has escaped large-scale tourism, so exudes a tranquil air. The dark form of the huge 11th Century Monastery of St John, looming over the huddle of white buildings of the tiny, sleepy capital of Hora, can be seen from every part of the hour-glass-shaped island. In Hora’s steep, twisty alleyways, each turn reveals snoozing cats draped over walls or glaring out of doorways.

Don’t miss: The icon-filled Cave of the Apocalypse, revered as the place where St John the Divine recorded his visions that became the Book of Revelation in the New Testament. Three cracks in the rock were caused by the voice of God honouring the Trinity, according to believers.

Taste this: A thirst-quenching beer while people-watching at the characterful old cafe-bar Arion in the little port of Skala before taking a tender back to the ship.

Downtime aboard: Watch a cookery demonstration by the chef whipping up delicious dishes from various islands, such as Santorini’s fava and Mykonos-style dakos – then dig in! 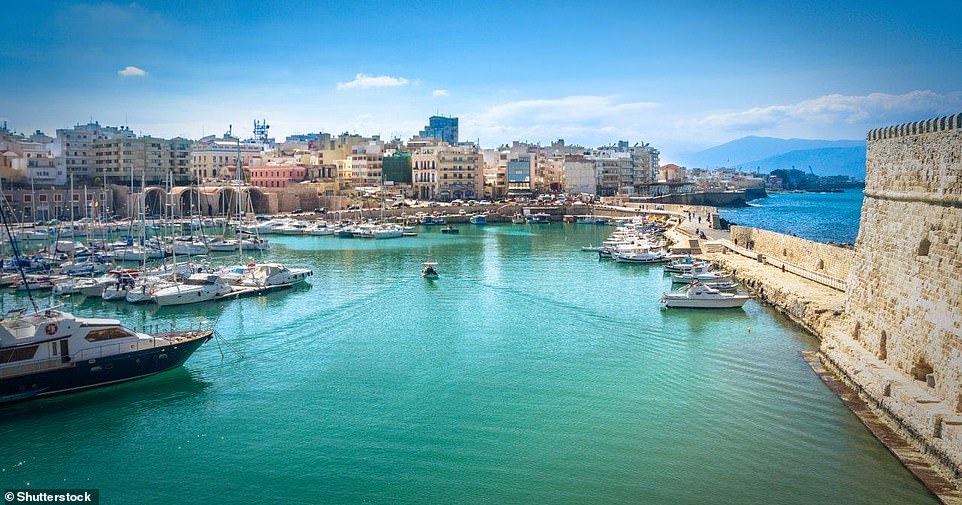 During the trip aboard Celestyal Olympia, the ship sails towards Crete and docks in the best spot – the capital, Heraklion

The largest of all the Greek islands, Crete has far too much to see in half a day, but the ship docks in the best spot – the capital, Heraklion. Just a couple of miles away are the amazing excavations at Knossos, the great Minoan palace uncovered by British archaeologist Sir Arthur Evans in the early 20th Century, where legend says Theseus slayed the Minotaur in his labyrinth.

Alternatively, travel through picturesque countryside on an excursion into the mountains to Stironas, a quaint village of stone houses, wine cellars, home-distilled raki, and a feast of typical meze, drizzled with pure Cretan olive oil. 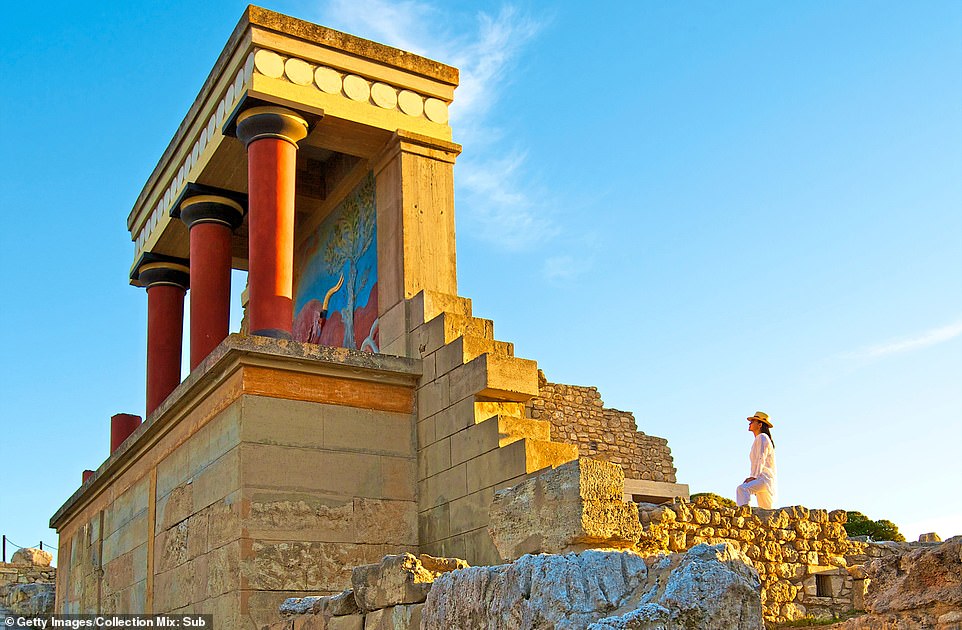 Minoan marvels: The Palace of Knossos, below. Top: The Ladies In Blue fresco from the site 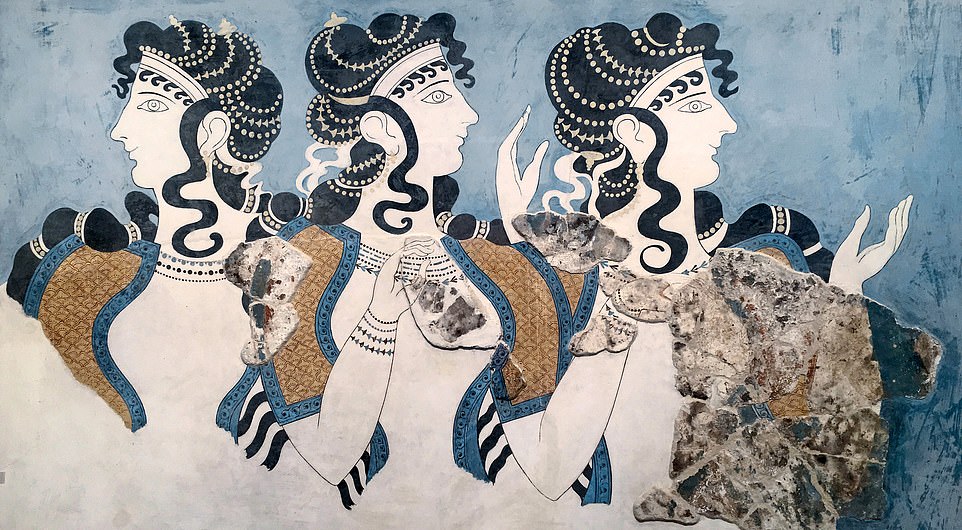 Heraklion’s newly revamped, modernist Archaeological Museum showcases treasures spanning 5,500 years, including the Ladies In Blue fresco (seen above) from the Palace of Knossos

Don’t miss: Heraklion’s newly revamped, modernist Archaeological Museum, an airy and gleaming showcase for treasures spanning 5,500 years. Gaze in wonder at the 4,000-year-old, ivory Snake Goddess and Crete’s poster girls, the Ladies In Blue fresco, both from the Palace of Knossos.

Taste this: Bougatsa, a creamy yet light pastry, sitting at an outside table at Phillosophies cafe in Fountain Square.

Downtime aboard: You’ll soon pick up the steps of Zorba’s Dance at the class led by the exuberant cruise director on deck. Then take a dip in the pool or have a siesta. 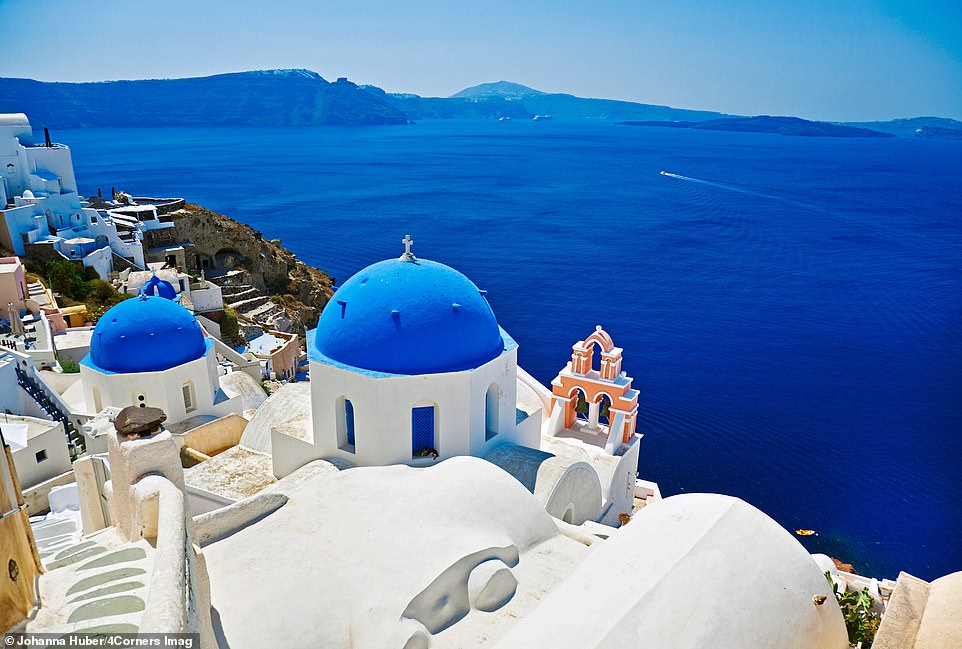 While in Santorini, soak up the stunning views from Oia, the pretty, whitewashed village with famous blue-domed churches, clinging to Santorini’s northernmost cliff

Sailing into Santorini on cobalt-blue water you’ll see why it is regularly voted the world’s most beautiful island. Surrounded by a dark, soaring rock face topped with a dusting of white houses, like salt crystals on the rim of a margarita glass, the circular bay is, in fact, the caldera of the volcano that blew the heart out of the island in about 1600 BC.

You’ll find black-sand beaches, thermal springs, sloping vineyards in rich volcanic soil, and the fascinating site of ancient Akrotiri. This town was abandoned by its sophisticated inhabitants long before it was covered in volcanic ash, a mystery contributing to the theory that it must be the Lost City of Atlantis.

Don’t miss: Watching the sun set from Oia, the pretty, whitewashed village with famous blue-domed churches, clinging to Santorini’s northernmost cliff. Gorgeous views of your ship anchored in the bay, Santorini’s crescent coast and inky outlines of islets against the peach, pink and mauve-streaked sky will take your breath away.

Taste this: A glass of crisp, local nykteri wine, complemented by a dish of green olives, on the terrace of Flora, a chic spot for drinks overlooking the caldera at Oia.

Downtime aboard: Watch a lively after-dinner show inspired by Greek myths in the Muses Lounge on Deck 7, then join in the finale with the performers.

The cost includes all meals, an unlimited drinks package, onboard entertainment, gratuities and two shore excursions (Ephesus from Kusadasi and Oia in Santorini), but not flights.

Departures are from March to November 2019.