Cape Town is warned it faces riots amid water crisis

Cape Town has been warned it faces riots as it prepares for ‘the worst crisis any city has faced since 9/11’ with water due to run out by April 12.

Bottled water is being rationed in shops in the South African tourist destination to prevent panic-buying and hoarding ahead of its taps running dry.

Stocks of buckets and bowls have also run out in hardware shops across the drought-ridden city as families prepare for ‘day zero’ when the city’s water supplies are expected to run out.

Today a warning of ‘the threat to social order’ in the wake of the water crisis was predicted by Moody’s credit ratings agency.

The appalling levels of inequality among the city’s population could easily lead to civil strife and increased levels of conflict and crime in the face of severe water restrictions, a new report from Moody’s suggested, as it redflagged the city’s economy.

Bottled water is being rationed in shops in Cape Town to prevent panic-buying and hoarding as the drought-ridden city faces ‘the worst crisis since 9/11’ ahead of its taps running dry. People are pictured queuing to collect water in the city last week

Cape Town currently holds the lowest level of investment grade and is on review by the agency for a further downgrade.

Day Zero is likely to hit the city’s two main industries hardest – tourism and agriculture – resulting in massive job losses, tax income for the city and a sharp rise in the cost of food.

The bleak Moody’s report also predicts a threat to public health as a result of poor sanitation.

Many supermarkets have now imposed a limit on the number of water bottles each shopper can buy to prevent long queues and fights breaking out between customers, as summer temperatures soar above 30 degrees.

The Western Cape’s premier, Helen Zille, warned that ‘as things stand’ the challenge ‘exceeds anything a major city has had to face anywhere in the world since the Second World War or 9/11’.

The army and police are on standby to be deployed to 200 points where up to 20,000 people will have to wait for their daily ration of 25 litres (6.6. gallons) in a massive, indefinite operation that threatens to bankrupt the city and force hospitals, schools and businesses to close. 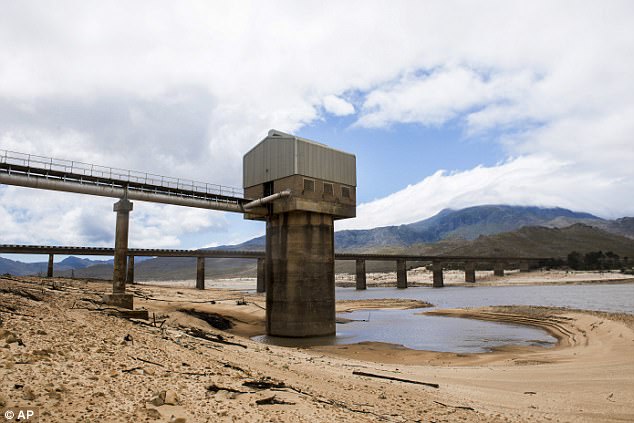 Cape Town’s main water supply is from the Theewaterskloof dam (pictured) outside Grabouw. A harsh drought may force South Africa’s showcase city to turn off most of its taps

Day Zero is scheduled for April 12 but could be moved closer unless the city’s four million people plus thousands of tourists stick to their current individual daily allowance of 50 litres from the mains supply.

The deadline has already been moved forward by ten days. More than half of the city’s population – many of them living in wealthy, predominantly white suburbs – are continuing to flout restrictions and the threat of heavy fines in favour of having green lawns, colourful herbaceous borders and full swimming pools.

Cape Town Mayor Patricia de Lille slammed them as ‘callous’, adding: ‘It is quite unbelievably that a majority of people do not seem to care and are sending all of us headlong towards day zero.’

If and when the taps do run dry, the city’s residents will have to queue for rations under supervision of the army and police until it rains enough to refill the reservoirs that serve it, which may not be until June or July.

The crisis has been triggered following three years of low rainfall and claims of poorly managed resources.

Despite longstanding predictions of a looming crisis, plans for new infrastructure and desalination projects are still months from implementation. 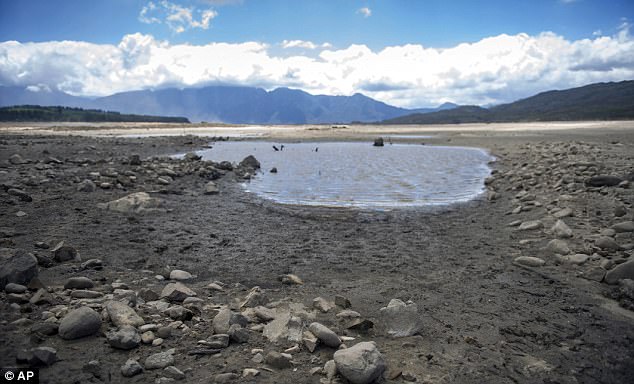 A warning of ‘the threat to social order’ in the wake of the water crisis was predicted by Moody’s credit ratings agency. Pictures show how water has receded at one of the city’s key supplies, the Theewaterskloof dam

‘As things stand’ the challenge exceeds anything a major city has had to face anywhere in the world since the Second World War or 9/11,’ she said.

Cape Town has a population of four million and attracts more than 1.5million visitors a year, most of them during its peak summer season from December to March.

The tourism industry has reported a dip in numbers, but the hundreds of thousands of holidaymakers who are currently in the city have been told to ‘live like a local’.

Despite the drought’s obvious threat to businesses, a number are benefiting from the panic-buying of water, bottles, tanks and other items that will be needed once the mains supply runs out.

New social media sites have also been set up to notify shoppers of fresh water supplies into shops and to name and shame those who are hoarding or flouting the rules.

Tonnes of water have also been donated by residents of other cities, including Durban and Johannesburg, who are enjoying record rainfalls.