By Brittany Chain and Alana Mazzoni For Daily Mail Australia

Twelve people have been injured after a smoking van smashed into an Islamic clothing shop in Sydney’s southwest.

A Subaru SUV slammed into Hijab House on Waterloo Road and Juno Parade in Greenacre just after 3pm on Thursday.

Police said the car had previously crashed into another vehicle stopped at the traffic lights, before driving into the store.

Most of the victims are believed to be women aged between 18 and 30 and were in the store shopping at the time of the crash.

A 51-year-old man was arrested at the scene and taken to hospital, where he will undergo tests to check whether he was under the influence of any substances at the time of the crash, Deputy Commissioner Peter Thurtell said on Thursday night.

Video taken by a bystander showed thick smoke billow from the front of the Subaru while stopped at a red light. 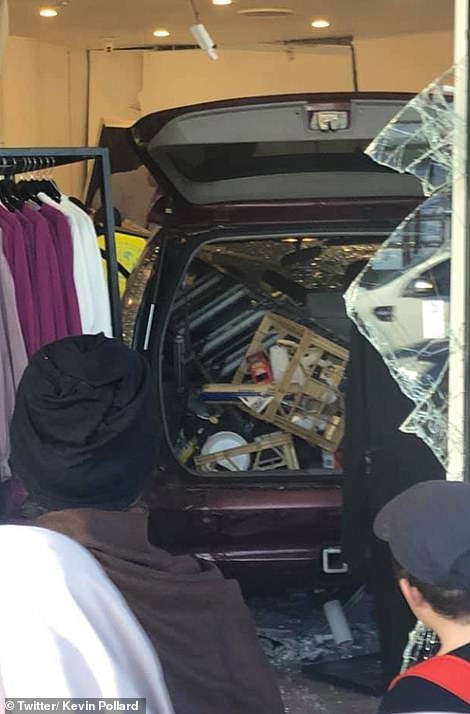 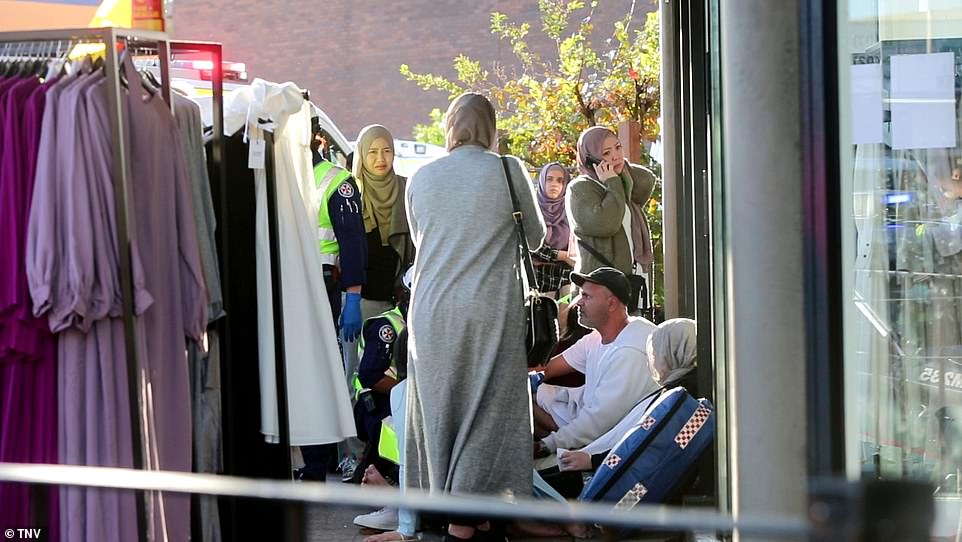 In footage of the incident, the driver of the SUV ploughed into another, smaller car, before driving directly into the shopfront 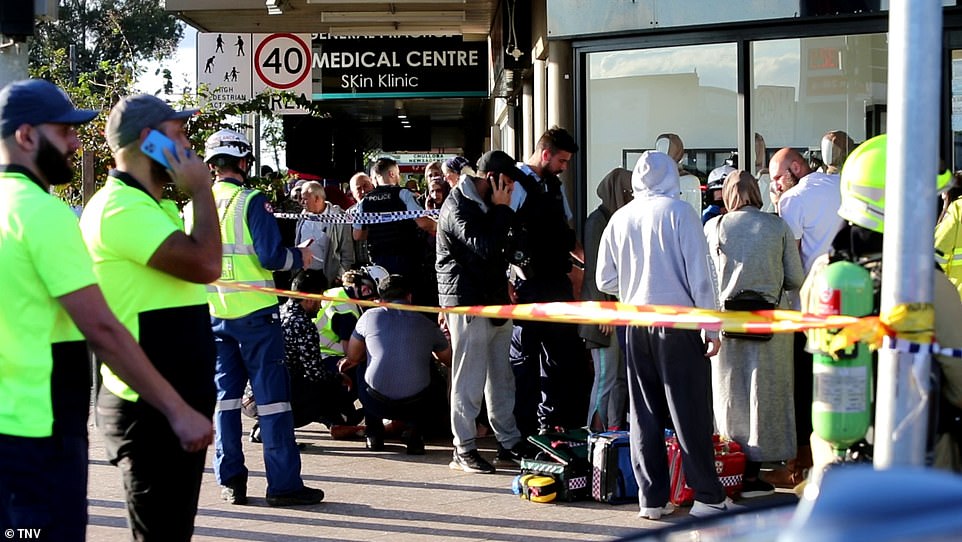 The Subaru then appeared to accelerate across the crowded intersection before ploughing into the shop’s glass windows.

The male driver was trapped in the car and had to be freed by emergency crews, while 11 pedestrians were injured.

‘The male driver and 11 pedestrians have been injured. They are currently being treated at the scene; however, their injuries are not believed to be life-threatening,’ police said in a statement.

Dozens of paramedics, firefighters, police, nine ambulances and a specialist medical team remain on the scene.

Two people have been taken to Liverpool Hospital and up to seven others are being treated for leg injuries at the scene.

NSW Police said there is no indication the crash was terror related. 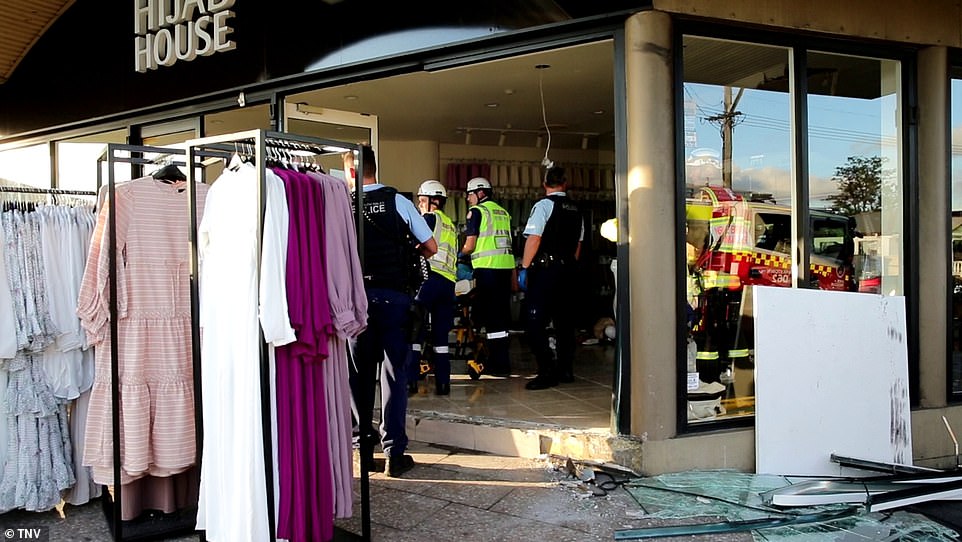 Dozens of paramedics, firefighters, police, more than nine ambulances and a specialist medical team remain on the scene 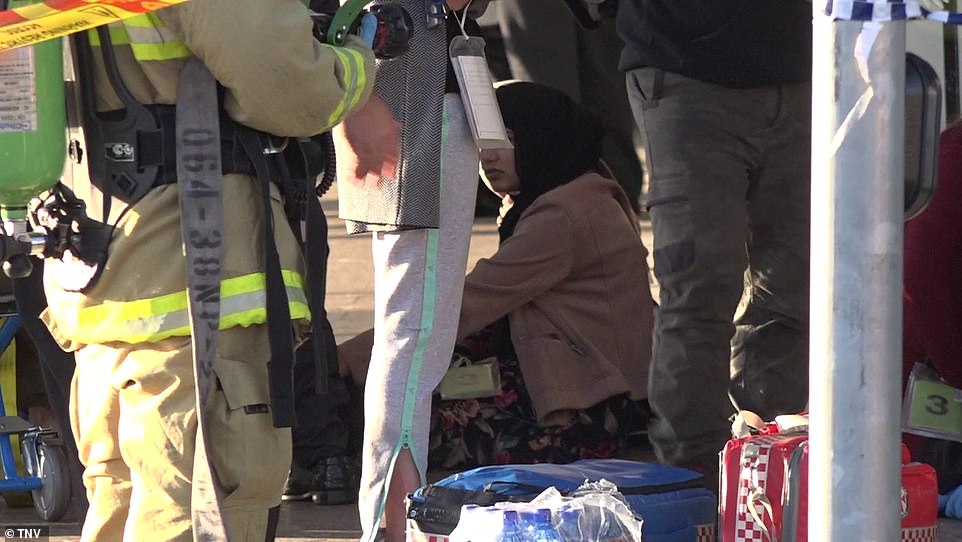 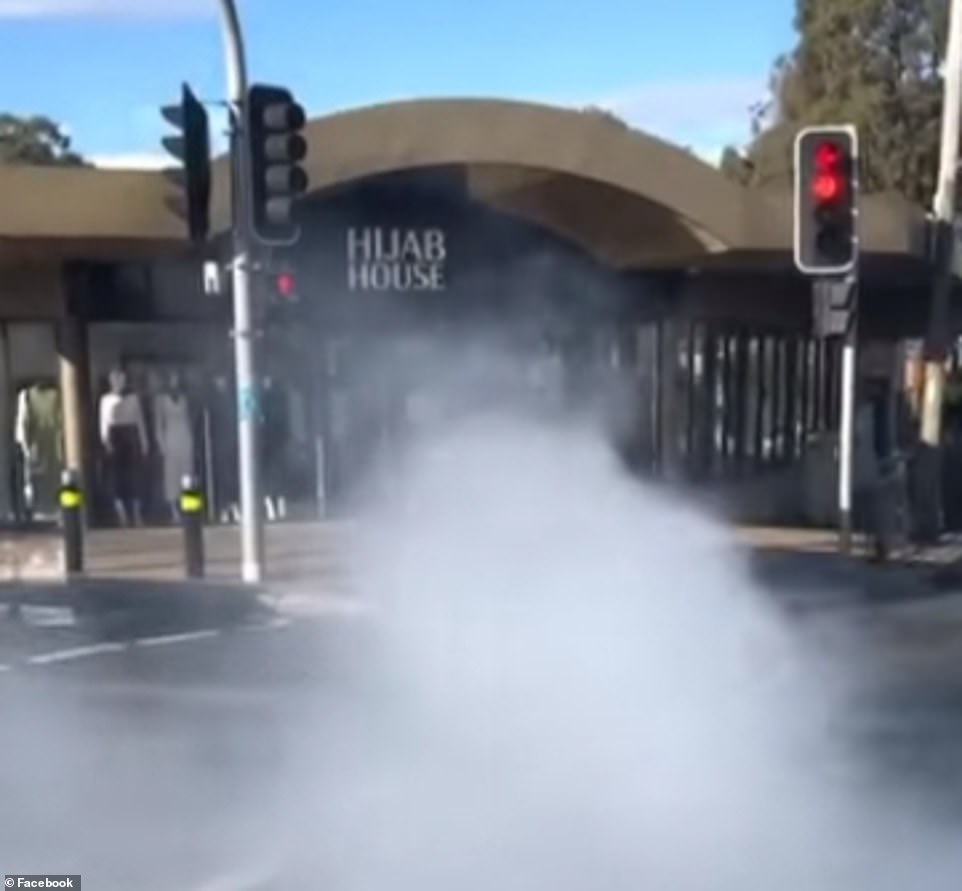 John Makhlouf, who owns a nearby petrol station, said he saw a car career through the intersection and into the shop.

‘I saw a lot of smoke and heard a beeping horn. One car got pushed out of the way and the other car went straight into the shop and crashed and you could hear the horn constantly beeping,’ he told the ABC.

‘It’s very lucky there was no one standing on the corner or crossing at the lights because they would have been hit.’

A worker at the Al Aseel restaurant next door said ‘police and ambulances were everywhere’.

Another woman suggested the store would have been busier than usual as women stocked up on outfits to celebrate the end of Ramadan. 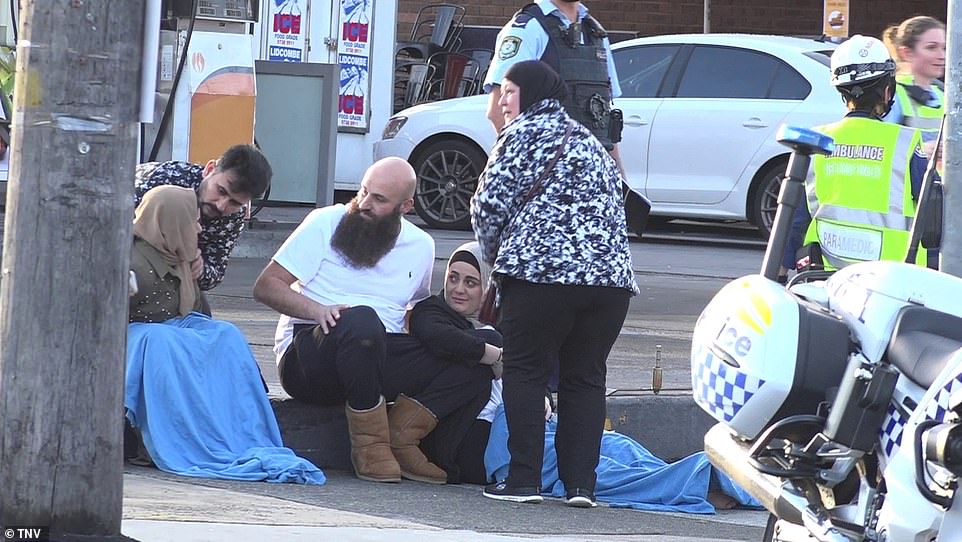 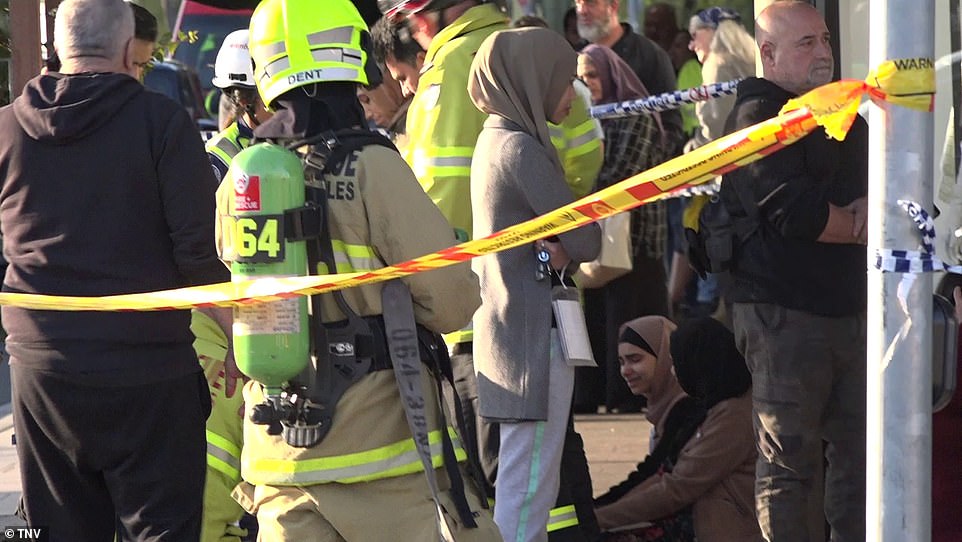 Footage of the shock incident was shared online 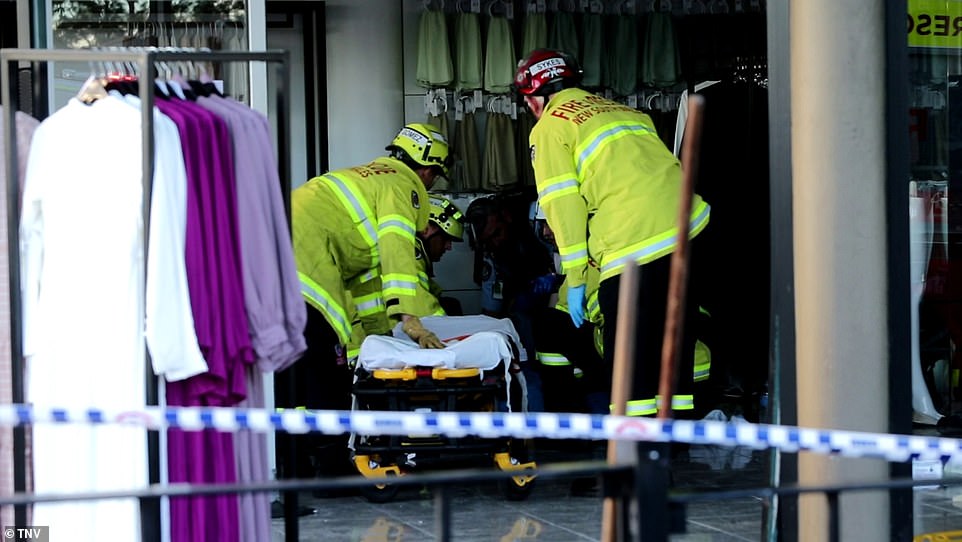 ‘There are police and ambulances everywhere. We couldn’t understand anything that was going on when it happened, it drove right through the shop,’ he told The Guardian.

Police have blocked off Boronia Road between Waterloo Rd and Noble Ave, while Waterloo Road is closed northbound.

Drivers are being advised to avoid the area.

NSW Police are asking for witnesses or anyone with CCTV to contact them. 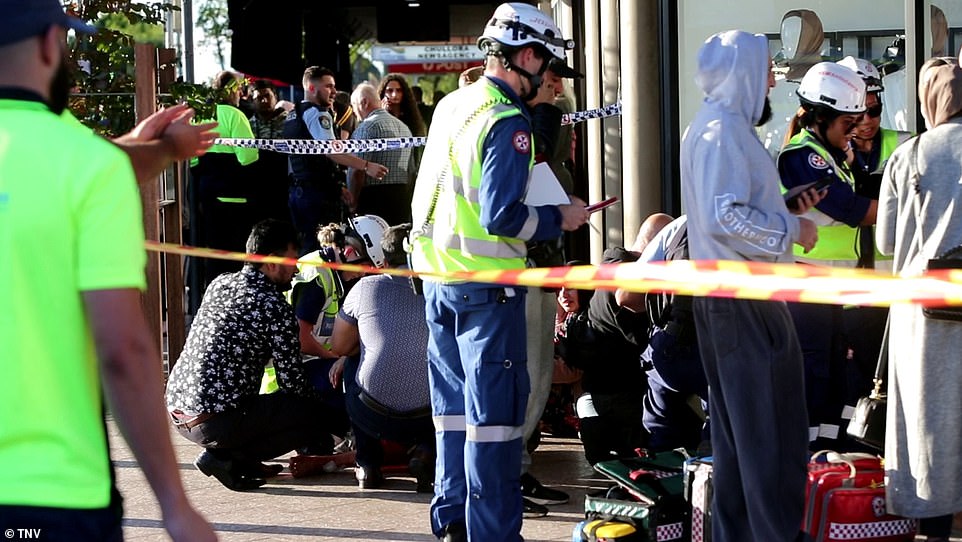 Paramedics, nine ambulances and a specialist medical team remain on the scene 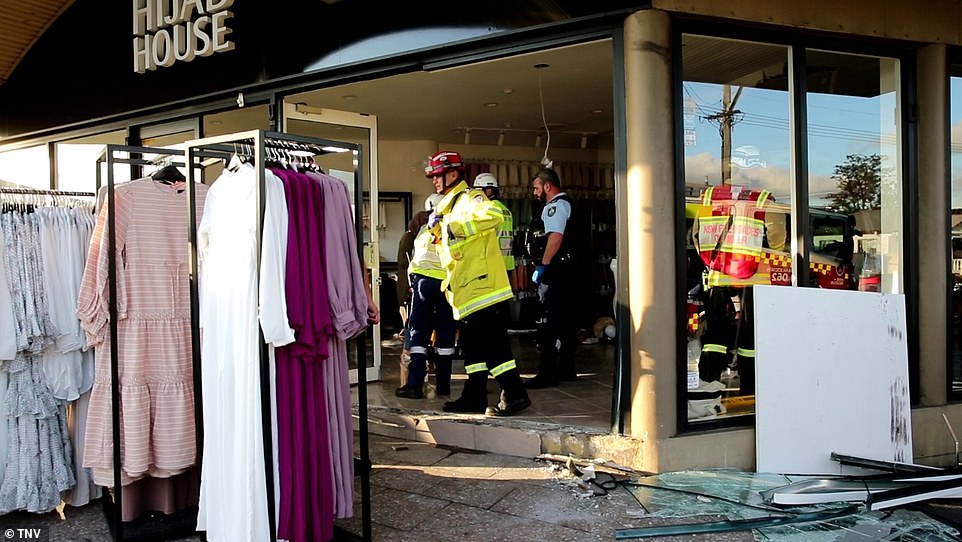