Car City: Coventry has begun its first week as the City of Culture

Coventry was once Britain’s motor city — and now its wheels are turning once again as it marks its first full week as the UK City of Culture 2021.

In the late 19th century, Coventry became Britain’s original Mo’Town. And today, it is adapting to the world of electric and autonomous cars as a pioneering national test-bed for self-driving and battery-powered vehicles.

At its peak, there was a car factory on almost every corner as the city became home to hundreds of now long-gone brands and suppliers including Austin, Rover, Triumph, Standard, Humber, Singer and Lanchester.

Made in Coventry: Jaguar moved into a former wartime factory in the City in the 1950s where it produced cars like the clasic E-Type (pictured)

This also made it a prime target for a Luftwaffe raid, which flattened the city in the night-time blitz of November 14-15, 1940.

The Nazis even coined a verb for it — ‘coventrieren’, to coventrate or destroy a city.

All the more poignant then that Coventry, which rose from the ashes and has the phoenix as one of its symbols, should be a centre for reconciliation through its rebuilt cathedral designed by Sir Basil Spence.

During the war, planners created secret ‘shadow factories’ in the surrounding countryside for anticipated wartime production; one of which Jaguar moved to in the 1950s until its closure by then owners Ford in December 2004. Another was Land Rover’s main UK plant in Solihull. 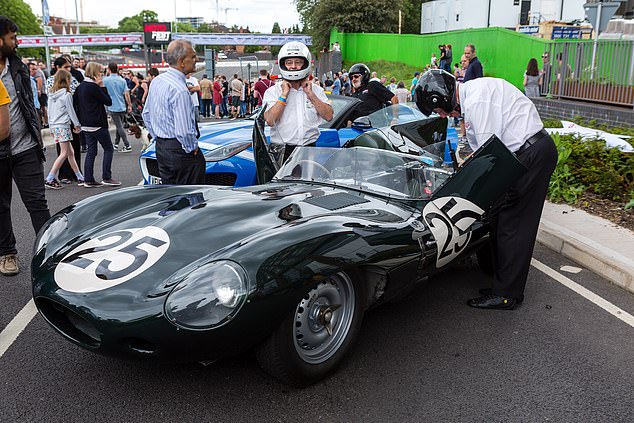 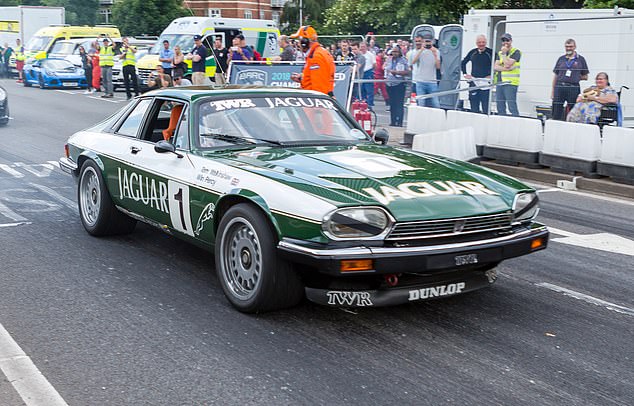 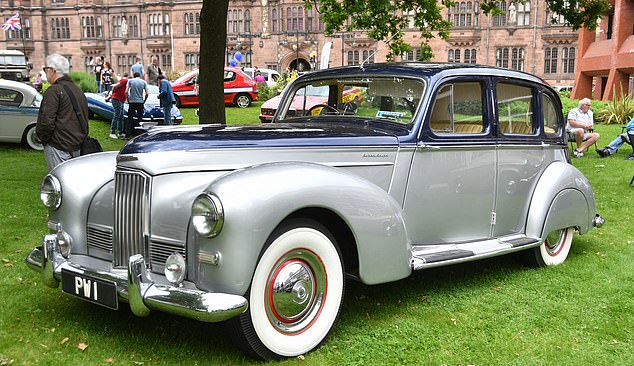 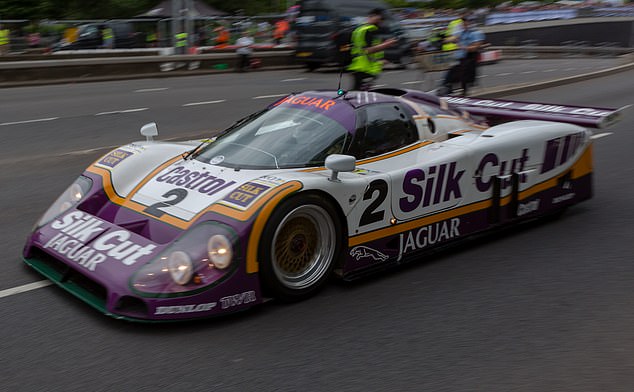 Coventry MotoFest in July and August is the largest free motoring festival in the UK. It combines live motorsport displays, classic and performance vehicles

Today, Britain’s biggest car-maker Jaguar Land Rover still has its global HQ in Coventry, with an engineering, research and development centre in Whitley and its expanding design centre down the road at Gaydon in Warwickshire.

Peugeot, which until January 2007 manufactured cars on the outskirts of the city in Ryton, is now part of the giant Stellantis group including Citroen and DS Automobiles, and still retains its UK headquarters there

London’s famous black cabs were built in Coventry for decades; now they’re electric and constructed by LEVC on the outskirts of the city in the village of Ansty.

Ironically, given the animosity between car-mad motorists and Lycra-clad cyclists, it was Coventry’s reputation as a centre for bicycle production in the 19th century that led to the birth of the motor car in Britain.

In 1896, a Victorian entrepreneur called Harry Lawson, who had made his fortune manufacturing bicycles, bought a former textile mill to produce the first British car: a Coventry Daimler. 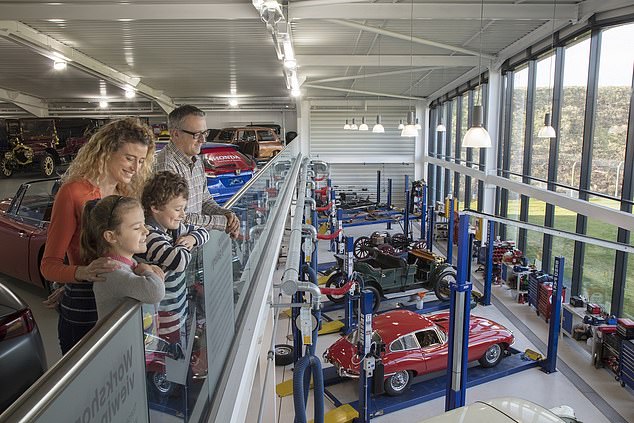 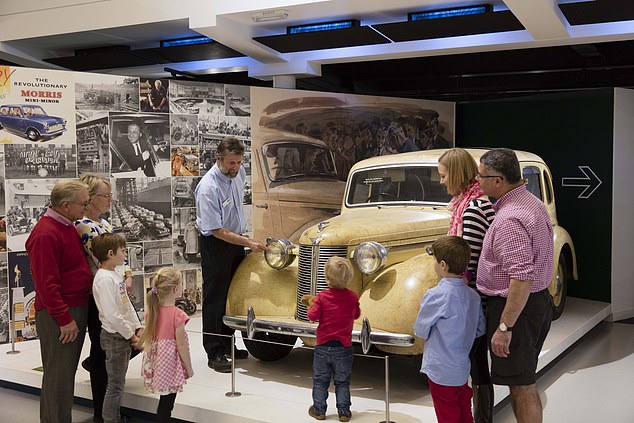 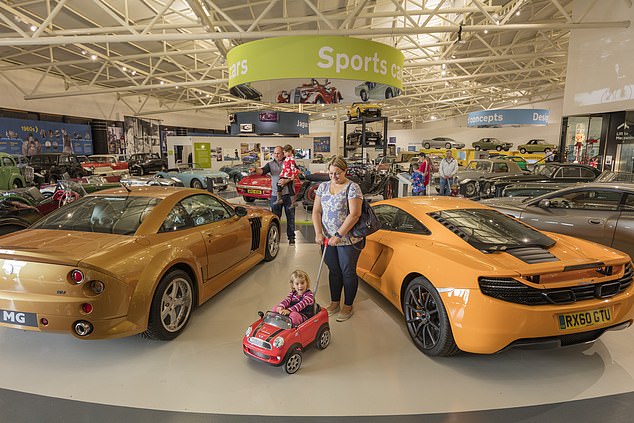 The British motor museum houses the world’s largest collection of historic British cars, with more than 300 classic motors from the collections of the British Motor Industry Heritage Trust

He did so by teaming up with engineer Frederick Simms, born in Hamburg to an English father and German mother, who struck up a friendship with German car pioneer Gottlieb Daimler.

Aged just 27, Simms bought the rights to Daimler’s patents in Britain and the Empire — nearly a quarter of the globe — excluding Canada.

The first Coventry Daimler — one of which I’ve driven — was launched in 1897 and the British motor industry was born. Jaguar arrived in Coventry in 1927 when founder William Lyons (later Sir William) moved his Swallow Sidecar company from Blackpool.

He then switched to making cars, initially under the ‘SS’ badge. Given the wartime connotations, from 1945 the firm changed its name to Jaguar, after the SS Jaguar model of the 1930s.

Petrolheads are being sent to Coventry – and they’ll love it 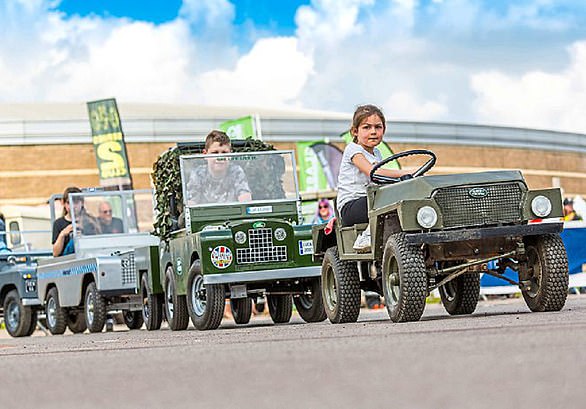 ‘Grace, Pace, Space’ was its motto in the 1950s. But it was the E-Type sports car — this year celebrating its 60th anniversary — that along with the Mini came to epitomise the spirit of Swinging Sixties.

When I lived and worked in Coventry, my first landlords were retired Lancastrians Harry and Connie Teather, who moved with Lyons to the city in 1927.

Connie was a PA to the directors and Harry rose through the ranks from the stores to become the company’s purchasing director in the 1950s. They regaled me with tales of those exciting early years. 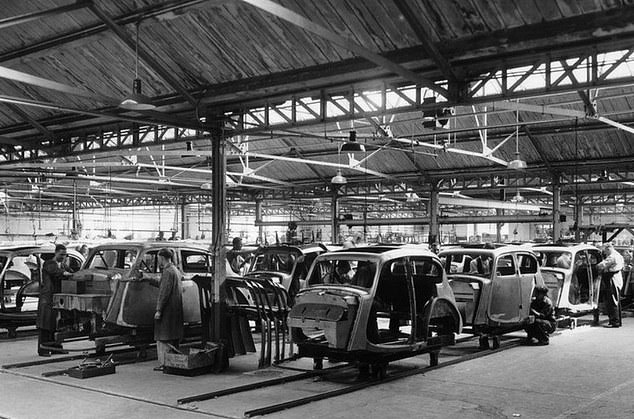 Production at a Rootes factory in the 1930s. Rootes Group, which included the brands  Hillman, Humber, Singer, Sunbeam, Talbot, Commer and Karrier, sold to Chrysler in 1967 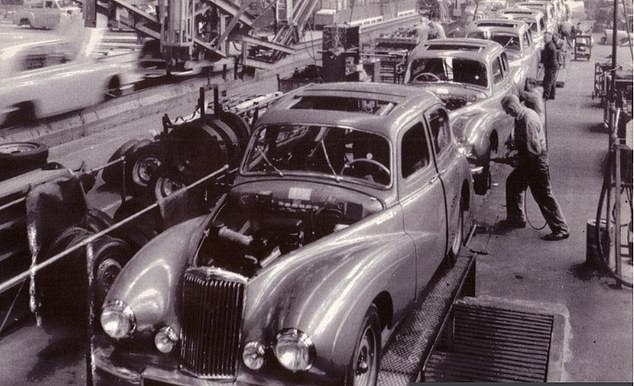 Production line: Sunbeam Talbot 90s being built at a factory in Ryton near Coventry in 1950

But Coventry became in part a victim of its own success, with the boom years of the 1950s and 1960s giving way to the industrial strife of the 1970s and the Ghost Town years of the 1980s, as Coventry two-tone band The Specials chronicled.

Back then, car firms wanting key components had to pay ‘the Coventry Rate’, ruthlessly enforced by the trade unions. Industrial strife and strikes became the norm.

Coventry, and the Midlands generally, began to price itself out of the car market, allowing leaner foreign competitors in. 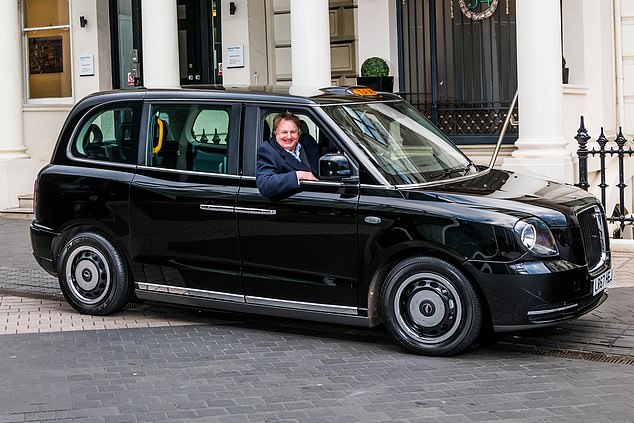 Fare play: Ray Massey tries out one of LEVC’s new electric taxis. London’s famous black cabs were built in Coventry for decades. Now they’re constructed on the outskirts of the city 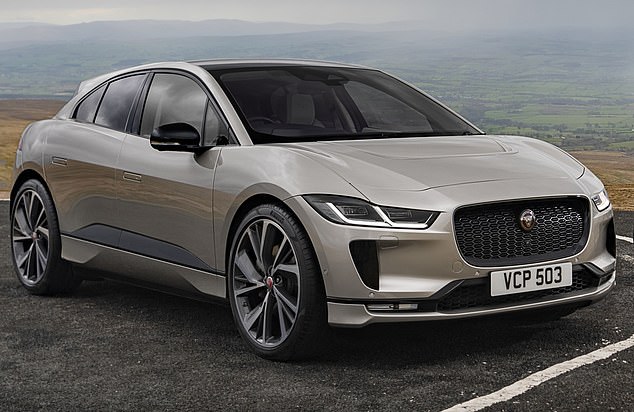 Next generation: The all electric Jaguar I-Pace. Jaguar has a huge engineering, research and development presence at Warwick University

It also opened the door to ‘disruptor’ Japanese car-makers such as Honda, Toyota and Nissan, which set up in new regions, with new industrial practices, eager workforces and lower costs. Soon Britain’s Mo’town became dubbed ‘Giro City’ after the unemployment cheques.

But the future is now looking brighter and Coventry’s City of Culture status will help highlight both existing and untapped potential.

Today, Jaguar has a huge engineering, research and development presence at Warwick University.

The university hosts the world-renowned Warwick Manufacturing Group (WMG), which carries out research and development for car companies around the globe, and the Advanced Propulsion Centre which develops ‘green’ powertrains. 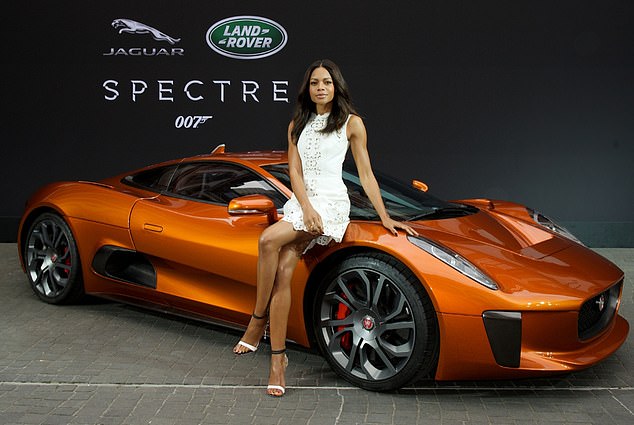 Naomie Harris, who plays Miss Moneypenny, with the electric Jaguar C-X75 supercar which appeared in the 007 movie Spectre

Coventry University, in the city centre, has provided the global car industry with top engineers and world-class designers, and even offers a degree in automotive journalism.

Lady Godiva, who rode naked through Coventry protesting against the taxes imposed by her husband Leofric, Earl of Mercia, would be proud. But I wonder what she would be driving today?

Rev up for a bigger, bolder, greener QashQai

Production of Nissan’s new third-generation Qashqai family crossover is to begin at the Sunderland plant.

The new Qashqai has grown in size, gained bolder looks, been fitted with softer-touch fabrics, and has the option of new green petrol-electric hybrid power.

Nissan says it is targeting ‘down- sizers’ by offering business-class comfort and tech at economy-class prices, with up to a quarter of sales expected to come from drivers switching from bigger cars. 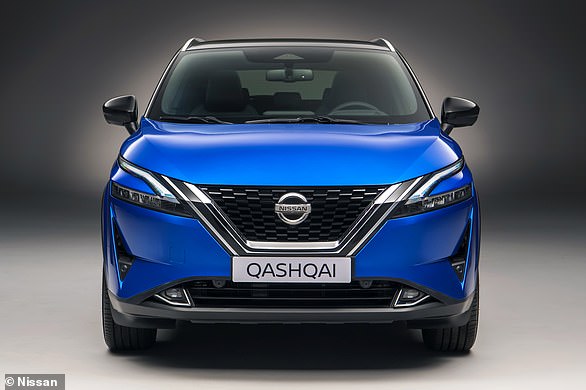 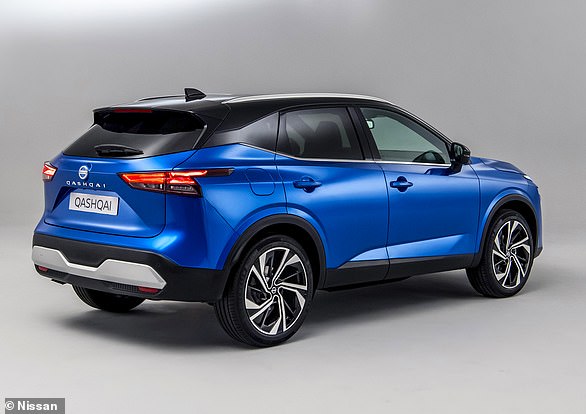 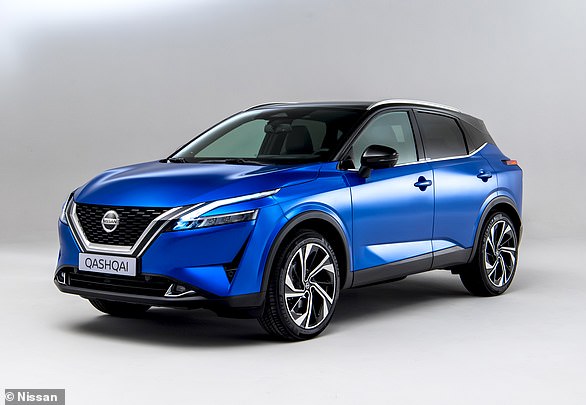 The new Qashqai has grown in size, gained bolder looks, been fitted with softer touch fabrics, and has the option of new green petrol-electric hybrid power

Priced from £23,535 to £37,835, the new Qashqai was conceived at Nissan’s European design centre in Paddington, West London, before being manufactured in the North-East.

It is available both as a petrol-electric hybrid and mild-hybrid — but no diesel. Initially, customers can choose a 1.3-litre mild-hybrid petrol version offered with two power outputs — 138hp and 156hp. The hybrid is expected to follow next year.

The hybrid’s ‘e-POWER’ system uses a 1.5-litre, 154hp petrol engine to help generate electricity — like a mini power station — to drive a 187hp electric motor and can travel for just over a mile on electric power only.

Motorists can chose to drive in ‘e-pedal’ mode, pressing down on the accelerator to proceed and taking their foot off the same pedal to slow down and brake.

Nissan has hailed its arrival as a huge vote of confidence in post-Brexit Britain and has invested £400 million to produce the new Qashqai in Sunderland.