CCTV has caught the shocking moment an alleged drunk woman driver swerved across a road and ploughed into a parked car before getting wedged in a hedge.

The grey Holden Cruze can be seen smashing into the parked red Hyundai Getz and demolishing a street sign before it finally came to a halt in a neighbour’s garden.

As onlookers rushed to help, a barefoot woman emerges from the driver’s side of the crashed car and calmly walks round to yank open the passenger door.

She seems to exchange words with her passenger – glimpsed earlier in the video wearing a hi-vis jacket – who was engulfed in airbags activated by the crash.

The woman then appears to walk off in fury, sending worried bystanders scurrying. 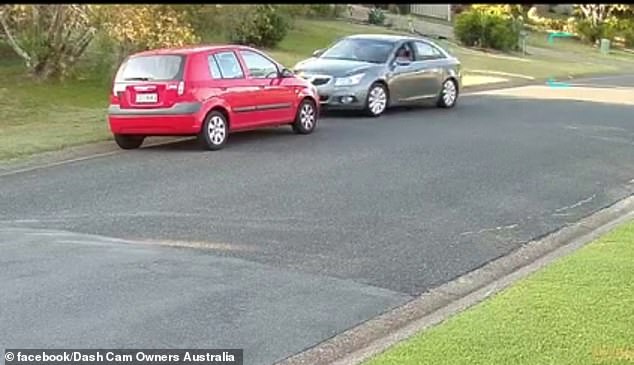 Footage of the drama was captured by a home security camera in Cara Street in Aspley in Brisbane’s north on Thursday afternoon.

It showed the grey car swerving into the red vehicle before it mounted the nature strip, knocking the street sign flying as the red car spun into the middle of the road.

Debris from the crash was thrown into the air by the impact, with the front of the Hyundai left a crumpled tangle of metal. No-one was in the Getz at the time.

Smoke could be seen billowing from the engine of the Holden as it nestled in the hedge.

One neighbour apparently holding a beer approached the woman but was then seen quickly walking away. 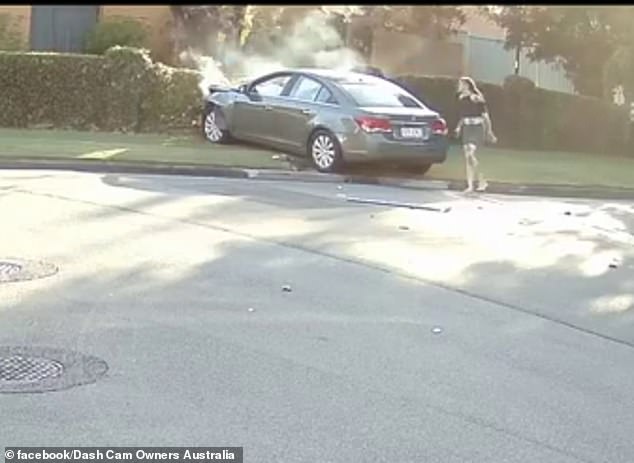 Queensland Police told Daily Mail Australia a 41-year-old woman from Upper Caboolture has been charged with driving ‘over the general alcohol limit but not over the middle alcohol limit’.

She will appear at the Brisbane Magistrates Court on February 15.