The presenter of a popular Channel 4 car restoration programme has arranged for thousands-of-pounds worth of building tools stolen from a former soldier, who helps out on a BBC home renovation show hosted by Nick Knowles, to be replaced.

Paul Matson, a volunteer on DIY SOS – which renovates homes for hard-hit families – was heading out in Hessle, near Hull, East Yorkshire, on Thursday morning when he spotted the theft.

Mr Matson, 55, was left ‘crying on his doorstep’ when he realised his tools had been stolen by thieves, despite an alarm system on his van.

The callous robbery prompted Knowles to call for help, inspiring Tim Shaw – the host of Channel 4 show Car SOS – to contact his building supplier sources to replace the equipment lost.

Tim Shaw (above), the presenter of popular C4 car restoration show Car SOS has arranged for thousands-of-pounds worth of building tools stolen from a former soldier – who helped out on Nick Knowles’s BBC show DIY SOS –  to be replaced

Speaking exclusively to MailOnline, Shaw, 43, said: ‘As a tradesman, having your tools stolen is like having your arms and legs amputated because without them you’re helpless.

‘When I read about, it I was furious and wanted to help. So we went to DeWalt, who own Black & Decker, and they’ve pledged to replace whatever was taken.

‘So from one SOS show to another, we hope to keep them alive.’

Shaw, whose own show sees him and a team of mechanics repair rundown cars for struggling drivers, empathises with Mr Matson because ‘he knows just how much of a shoestring budget these shows are made on.’

‘So we know the cost of DIY restorations. And I saw how riled up Nick was and I get it, the impact of this theft is enormous.

‘It could kill them, it really could. They could be left skint without the means to work.

‘Anything that gets in the way, or prevents people who help people doing their job isn’t right.’

He continued: ‘We’re not flush with money, we rely on volunteers and the goodness of people’s hearts and on community spirit – we know the impact of having these expensive tools stolen – they’re tradesmen’s livelihood.’

The Car SOS host filmed an emotional video where he spoke directly to Mr Matson as well as the thieves, urging the robbers to earn their tools instead of stealing them.

He said: ‘The person who stole them is a horrible, hideous human being.

‘And what’s worse is they must know the value of the tools, meaning they’re tradesmen themselves and therefore know how hard it is to earn money to pay for these tools.’ 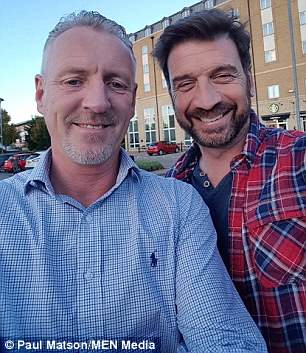 Mr Matson, who was working for free to renovate a family home, was left devastated after discovering his tools had been taken.

He said: ‘I’m gutted. I woke up to come and help the lads on DIY SOS and opened the side of the van and all the tools were gone.

‘There’s some major tools on board that van, items which cost over a £1,000 on their own.’

A BBC spokesperson said: ‘The DIY SOS team has been overwhelmed by the generosity of local people who have so kindly offered financial assistance and replacement tools to Paul Matson, after his tools were sadly stolen.

‘We cannot thank Paul, and all our other local tradespeople, enough for their time and skill in helping us to complete this build. The DIY SOS team has not yet heard from Tim Shaw, but we look forward to doing so and all donations are gratefully received.’

Mr Matson set up Hull 4 Heroes in 2016 after leaving the Army and struggling to get back on his feet.

Despite the theft, Mr Matson said he would still continue to help out on the house, which is being renovated by Nick Knowles and his team.

He said: ‘I’m a working man at the end of the day, what I’m doing here is for free but the tools going missing aren’t going to stop me.’ 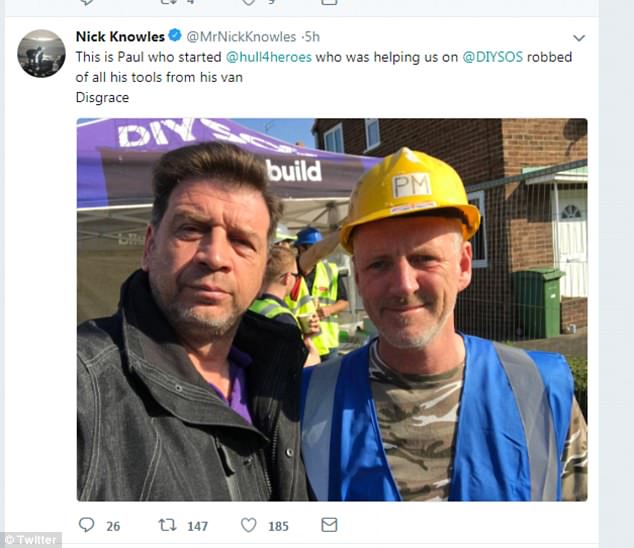 DIY SOS: Nick Knowles (left) appeals for help on Twitter as the man he labelled the ‘most amazing in Hull’ is targeted by thieves. Paul Matson, 55, had all his tools stolen from his van 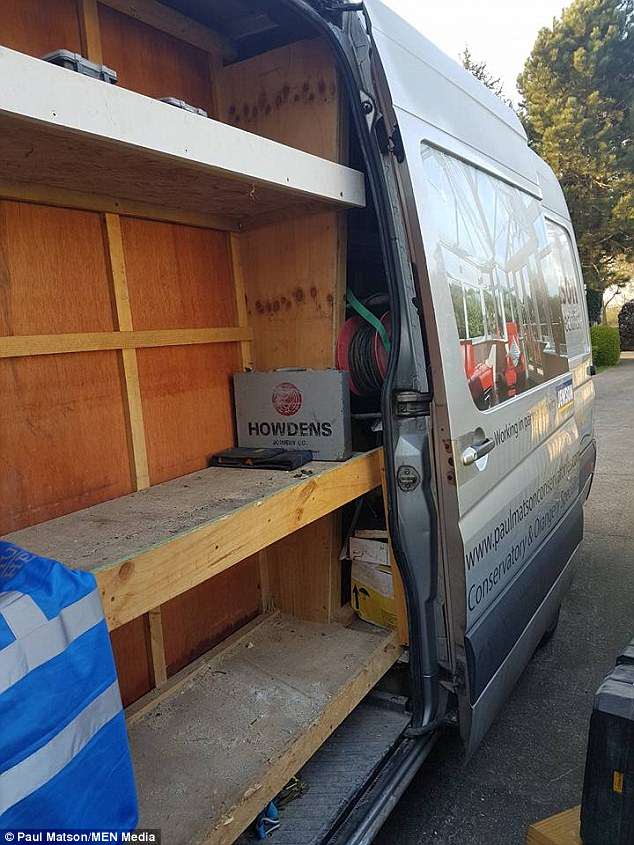 Paul Matson collected his £4,000 worth of tools over two decades, but thieves stole them overnight, leaving him unable to work. The volunteer carried on helping DIY SOS regardless

DIY SOS host Nick Knowles took to Twitter to vent his fury at the thieves.

He tweeted: ‘This is not Hull. Hull is here helping us build a house for a family.

‘People who stole Paul’s tools have no community. Not everyone in the community has community spirit but those that don’t are missing out for sure.

‘It is disgusting that any tradesman could have his tools nicked, but to think it has happened to Hull’s most amazing human being is just heartbreaking.’

Mr Matson has worked with Nick on previous builds in the area, including a DIY SOS project in Rise, building houses for veterans in Manchester.

The stolen tools had been collected by Mr Matson over a period of 20 years. Now he has now been left with nothing.

Mr Matson is helping to renovate the home of a family who have fallen on hard times, after the loss of their mother over Christmas last year.

The family being featured on DIY SOS: The Big Build were chosen after they themselves helped out on another project in the city, in 2015.

They helped the BBC team with the renovation of Motor Neurone Disease sufferer Jason Liversidge’s home when he was given just years to live.

Knowles praised Mr Matson for turning up to help the family regardless.

He said: ‘We greeted him with a hug and gave him a bacon butty and a cup of tea, and helped him get started with the help of other people’s tools.

‘I don’t have Facebook but a friend showed me the post, and I just couldn’t believe what I was seeing. I felt so angry and hurt for him. 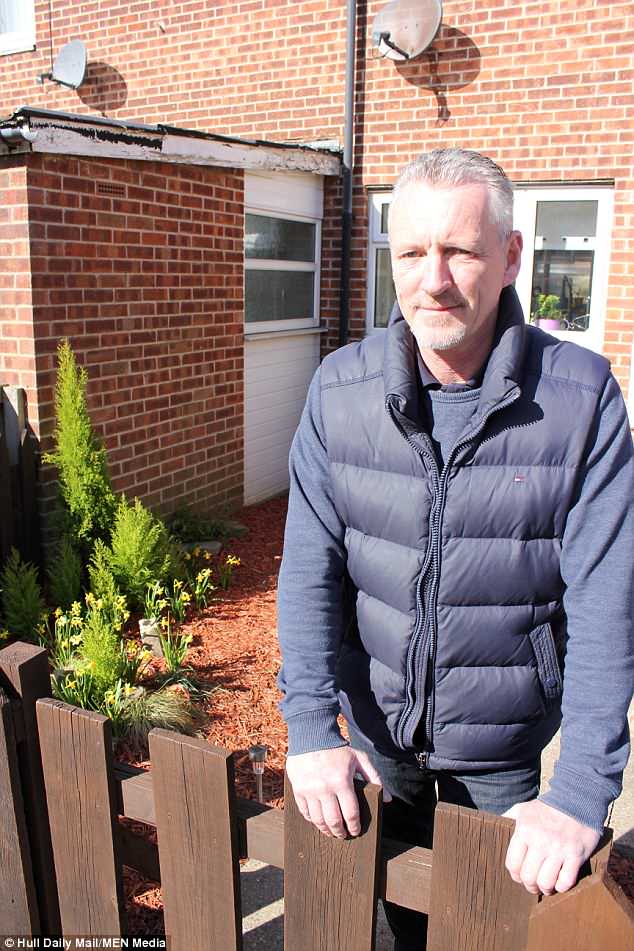 Paul Matson, 55, set up a charity to help former servicemen after leaving the Army and has become a regular volunteer on building projects, as well as working to support himself

‘He’s lost a lifetime of tools, and not only has this affected him helping us, but he now can’t work and make a living for himself.

‘I’m sure someone in the area can help replace these tools for him, or people can raise enough money for him to be able to get back to work.’

‘I know the people of Hull will help Paul, because he has done so much for the city.

‘I would urge people never to buy tools from car boots or anybody selling out of a random shed, because they are more than likely stolen. We need to have tougher laws so law-abiding citizens can be protected when all they want to do is earn an honest living.’ 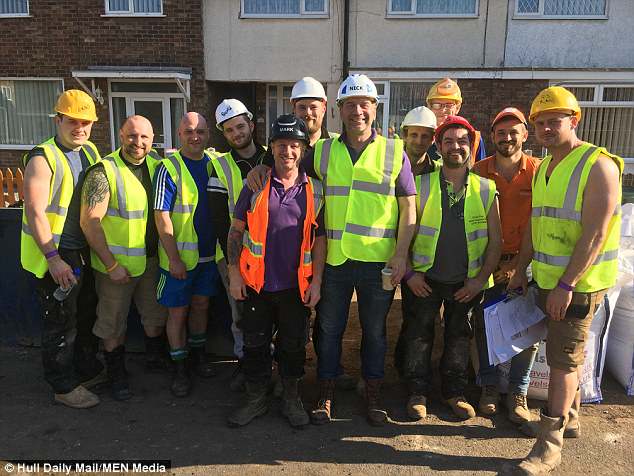 Nick Knowles surrounded by local tradespeople in Hessle, Yorkshire, where DIY SOS is helping a family who lost their mother at Christmas

The Mercedes Sprinter van was broken into sometime overnight between Wednesday evening and Thursday morning.

It is thought the tools were worth approximately £4,000.

It is not the first time the show’s volunteers have been targeted. In 2017, two vans were broken into when the DIY SOS team was working on a family home in West Bromwich.

Knowles and his crew were helping the family of Crystal Chambers, a 32-year-old who died after a short battle with stomach cancer in October 2015. Her two children were living in cramped conditions with her mother until the team stepped in. Again, £4,000 worth of tools were taken.

Sergeant Neil Taylor from the Mid Holderness Community Team said: ‘The kind-hearted victim had filled his van and was going to volunteer to help the team from the BBC television programme DIY SOS in Hessle.

‘He was offering to do his bit for the community and someone has now taken his tools. We want to try and get them back to him so he can help out with the building project.

‘Please call us with any information you may have in relation to this.’