Caravan of nearly 1,000 migrants becomes the fourth largest convoy to leave Honduras bound for the US in the last six months

By Luke Kenton For Dailymail.com and Afp

Nearly one thousand people gathered in the Honduran town of San Pedro Sula on Tuesday evening to form a new caravan bound for the US border.

The hopeful migrants first mobilized on social media, their number taking authorities by surprise as previous online appeals have failed to garner a significant response.

‘There are more than 800, almost a thousand,’ a police official told AFP.

Among the bustling crowd were a number of families with young children seeking to escape the rising violent crime and unemployment levels currently blighting the Central American country.

Nearly one thousand people gathered in the Honduras town of San Pedro Sula on Tuesday evening, including hundreds of families with young children 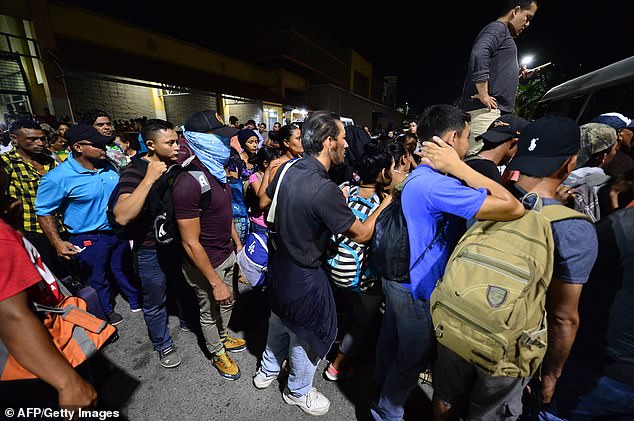 The bustling crowd scrambled to board minibuses departing from the Metropolitan Center of San Pedro Sula, on their first leg of a 1,600 mile journey to the US border 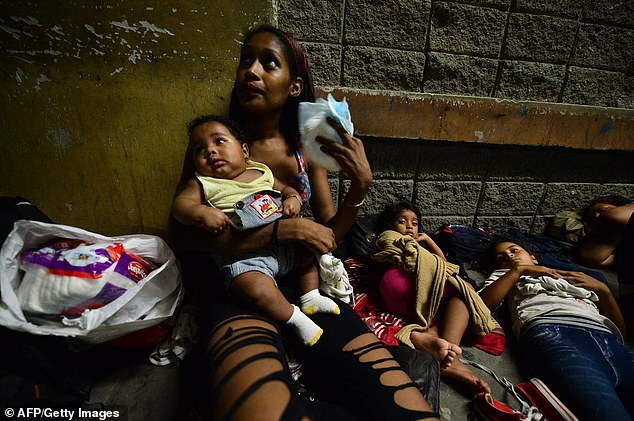 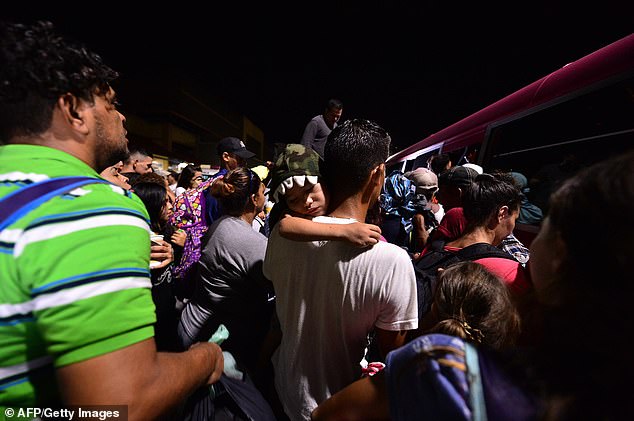 The convoy first mobilized together on social media, taking authorities by surprise as similar online campaigns have failed to garner significant attendance levels 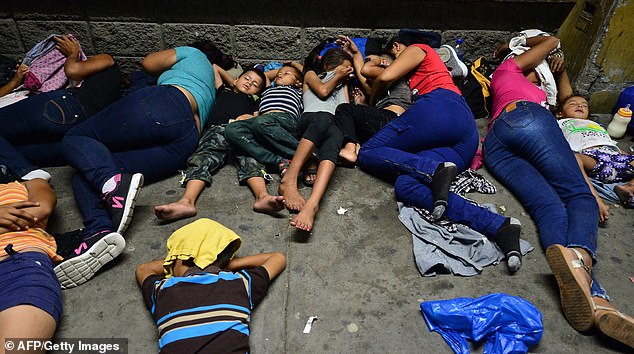 Many of the migrants set-off on their 1,600 mile journey to the border on Tuesday evening in a swell of overcrowded minibuses. Others huddled together and slept in the streets as they awaited more shuttles.

‘We are done with this government, there is no work,’ said 27-year-old Alexis Perez ahead of the voyage.

More of the congregation left on Wednesday morning and were pictured walking on foot and cramming into the back of pick-up trucks as they departed from the Metropolitan Center towards the Guatemalan border. 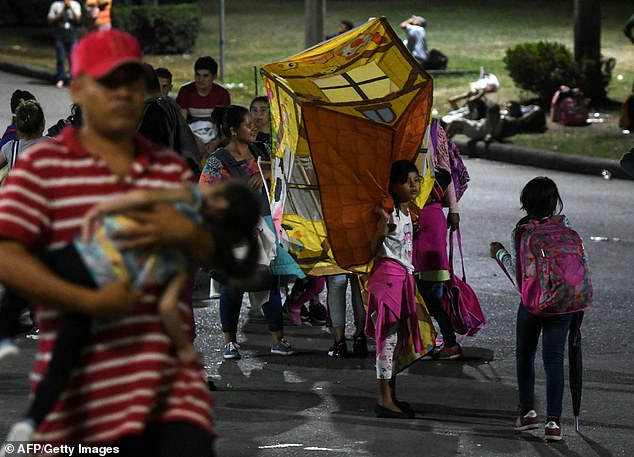 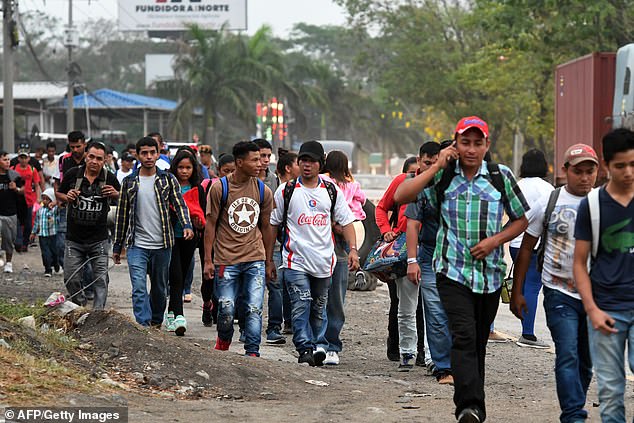 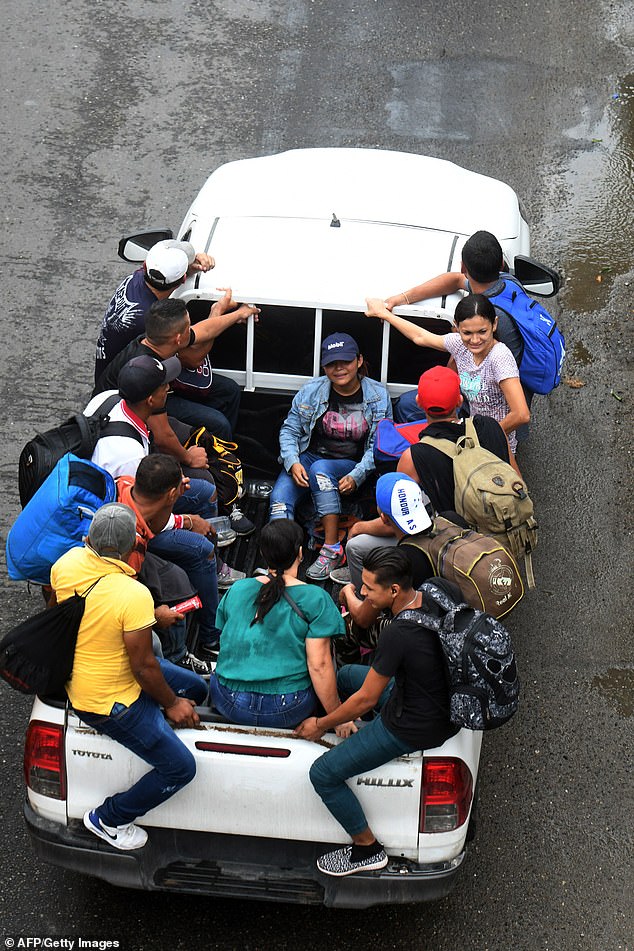 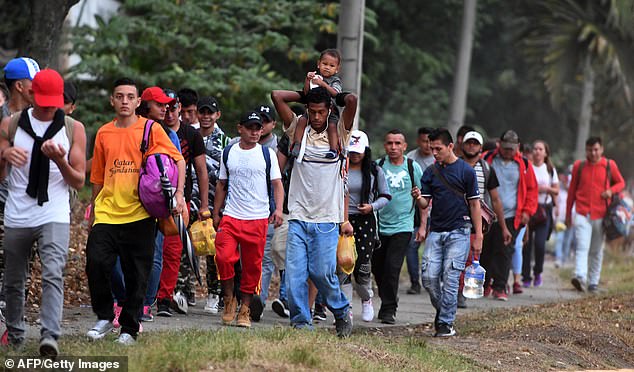 Equipped with water and food supplies, the caravans journey is likely to take several weeks to complete

Since October 13, three other similar convoys of migrants have departed from Honduras for the US in search of work or safety from drug-traffickers – with one caravan consisting of more than 2000 people.

But the asylum-seekers have caused a fair-share of controversy in the US over the past few months, where they’re regularly used as a makeweight in President Trump’s argument that building a wall across the Mexican border to prevent illegal immigration is a necessity.

Several thousand Central Americans have trekked across Mexico in caravans since last year, fleeing poverty and violence in their home countries.

They travel together in the hope of finding safety in numbers against Mexican gangs that regularly extort, kidnap and kill migrants, sometimes in collusion with local authorities.