This is the special moment a four-year-old boy with a rare disease met the selfless man who saved his life by donating his bone marrow.

Jack Shaw was just 18 months old when he was diagnosed with Hurler syndrome and given just 10 years to live.

A transplant was the youngster’s only option to survive – and his family faced a desperate race against time to find a donor match before the illness caused irreversible damage to his organs.

Fortunately James Evans came to the rescue by donating his bone marrow despite not knowing who the recipient would be.

The touching video, created by the Welsh Blood Service, captures the first meeting between the little boy and his saviour.

Mother Nadine Pullen, 27, is seen asking Jack ‘What did James do?’, and the schoolboy immediately replied ‘He rescued me’, reports WalesOnline.

James Evans, 26, from Cardiff, donated his bone marrow anonymously and Jack who has Hurler syndrome was the recipient

Jack’s illness means his body was unable to produce a particular enzyme which breaks down the natural sugars in his body.

Without the enzyme, sugar can build up and damage vital organs such as the heart.

Hurler syndrome is progressive, and incurable, but a blood or bone marrow transplant can stave off the ravaging effects. 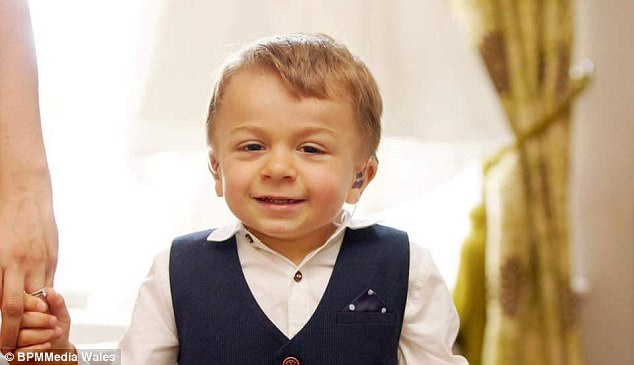 And while the boy was placed on the waiting list, James, 26, a researcher in the Cardiff Medicentre at the University Hospital of Wales, came forward to donate his bone marrow on December 18, 2014.

The family, who live in Portsmouth, were overjoyed to find out there had been a match and Jack received the transplant the very next day at Great Ormond Street Hospital in London.

Following the successful procedure, he went on to make a full recovery.

Family’s appeal to find the donor

Nadine was desperate to meet the person who gave her little boy the gift of life.

But because the entire process is carried out anonymously, the family only knew a few minor details about the donor’s identity.

All they were told was that the person was male, from Wales and was 25 years old when he gave his bone marrow almost three years ago. 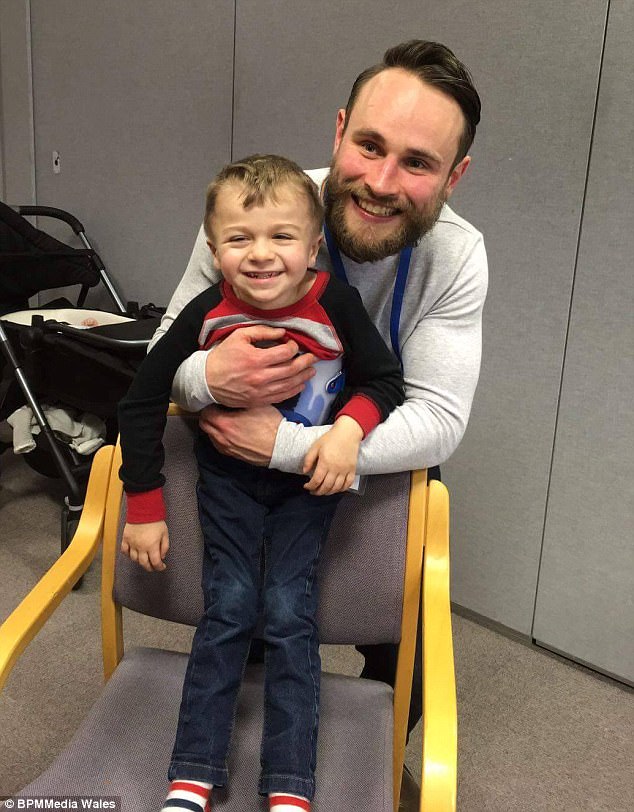 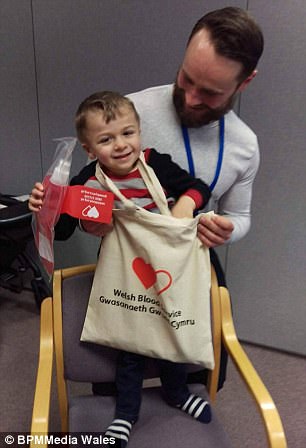 James said it was an ‘amazing, fantastic day’ when he met little Jack

HOW A BONE MARROW TRANSPLANT CAN HELP TREAT HURLER SYNDROME

Hurler syndrome, also known as MPS I is a genetic disorder that is progressive and potentially fatal.

There is no cure but treatments such as bone marrow transplantation and/or enzyme replacement therapy (ERT) can help make it a manageable disease.

Because children with untreated Hurler syndrome have physical and mental problems that get worse over time, it is best to have a transplant as soon as possible.

Those who get a transplant early enough can have normal or near-normal mental development, and damage to the organs is halted.

The family and the donor have been in touch anonymously through Anthony Nolan.

The standard practice is for the anonymity to be lifted two years after the procedure has taken place, however the charity lost contact with the donor.

At the time Nadine said: ‘I wouldn’t have the little boy I know and love today if it wasn’t for this man.’

So she made it her mission to personally thank the big-hearted man responsible for saving Jack and launched an appeal on social media.

WalesOnline ran a story about it, and James was found. He and Jack met for the first time at the Welsh Blood Service headquarters earlier this year.

‘It was so amazing that it’s hard to put it into words,’ said Nadine. ‘It was like meeting someone I’d known for a long time. James felt like a brother, like part of the family.

‘The connection between Jack and James was amazing. Jack managed to get across his character really well.

‘He was singing, dancing and really showing off.’

James said: ‘I can’t even begin to describe what an amazing, fantastic day that was.

‘The memory of meeting Jack on that day is going to stay with me forever.

‘And for that reason, I think you should consider signing up [to the bone marrow register].’

Jack has just started primary school – all thanks to James coming forward.

To find out more about becoming a bone marrow donor visit here.