The 42-year-old victim drove her Ford to the hand car wash near Asda in Pentwyn, Cardiff earlier this summer.

But she was suddenly groped by worker Azad Hassan, who grabbed her leg and breast before saying: ‘Nice’.

Hassan, 43, was given a community order and told to sign the Sex Offenders Register for five years after he admitted sexual assault.

The victim said: ‘I drove into the car wash and Hassan, who was serving me, told me to pull my car around the other side, separating me from the other person who was working there.

‘It was at that point he leant into the car and touched my breast, had a good squeeze of it and said ‘nice.’

‘I didn’t react at all, I ignored the whole thing because I was in a state of shock, you don’t think that anyone is going to do that.

‘He then touched my leg and was stroking it. I leaned over to get cash out and as I got out the car, he touched my breast again.’

She ran to tell another employees what happened straight after the assault and has spoken out in hope of encouraging other victims of random attacks to come forward.

She said: ‘I spoke to one of the managers there and she was just lovely.

‘She sorted out the whole thing and told me what I needed to do. I wasn’t in the right frame of mind, I couldn’t believe it had just happened. I felt angry and frustrated.

‘I was the one kind of downgrading it because it wasn’t an intrusive sexual assault but the police woman assured me and said he didn’t have the right to do it. They were really good.’ 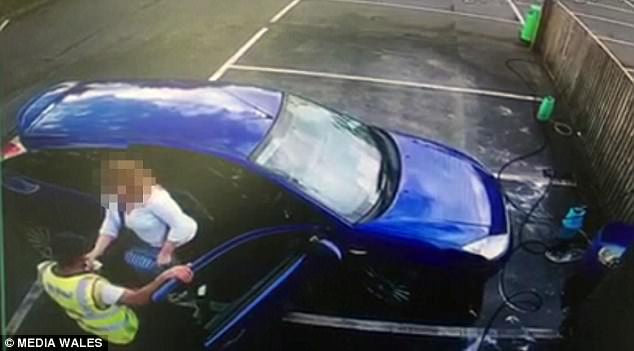 After the court case, the victim was told Hassan had been sacked from Hand Car Wash.

She said: ‘I hope he can never work where there are lone females again. If he goes back to be a car wash attendant it’s not a protected job. He can go back and do it easily.’

Masud Fazel, owner of Hand Car Wash, said: ‘He’s not working here anymore and I apologise for what happened.

‘I never thought he was like that otherwise I would have never employed him.’