A woman says she has been left too afraid to go outside alone after being targeted in a terrifying campaign of harassment.

Lisa-Marie Wall has had bricks thrown through her living room window and the windscreens of cars belonging to her family members in Cardiff, south Wales.

In one frightening attack last week, the 24-year-old was woken up in the middle of the night to find her car on fire.

CCTV footage showed a masked individual pouring petrol on the pavement and into her car before lighting it and making an escape on foot.

Lisa, who works as a customer service manager, said she was living in fear of further attacks and is afraid of going outside by herself.

She has even had a special letter box installed to prevent burning objects being posted through her door.

Earlier this month Lisa said she went to bed at about 1am after walking her dog. 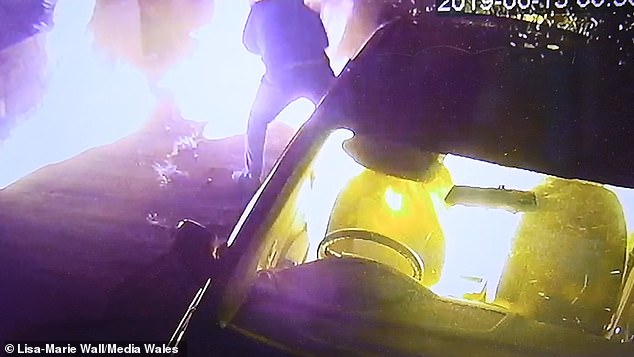 She said her family woke up on the morning of June 4 to find a brick on the living room floor and a smashed window.

Lisa said: ‘My dad woke me up because there was a brick on the floor in my living room.

‘Obviously we were all scared. Obviously I was scared for my dad’s sake and my sister’s baby plays in the front room.’

Lisa said the incident must have happened some time in the early hours of the morning after she went to bed.

The family reported the incident to the police and installed CCTV cameras outside of her home on the advice of officers. 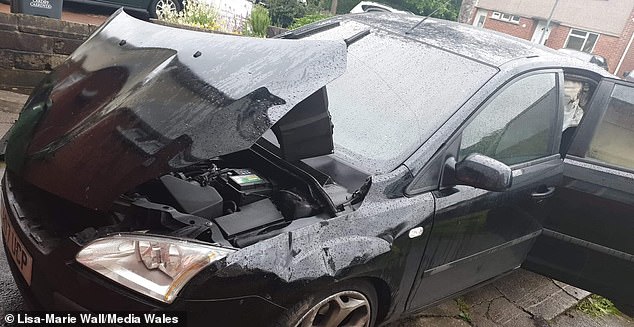 Two days later, on June 6, another brick was thrown through the window of her sister’s car outside her home on Wyncliffe Gardens in Pentwyn, Cardiff.

Again the matter was reported to the police, and Lisa said she believes they are related.

The following week, on June 14, she discovered the back window of her car was smashed by a large brick.

The recently installed CCTV picked up a person throwing the brick into the back of her car before running off.

Lisa again reported the incident to the police but she said officers told her there was not enough evidence to identify a suspect. 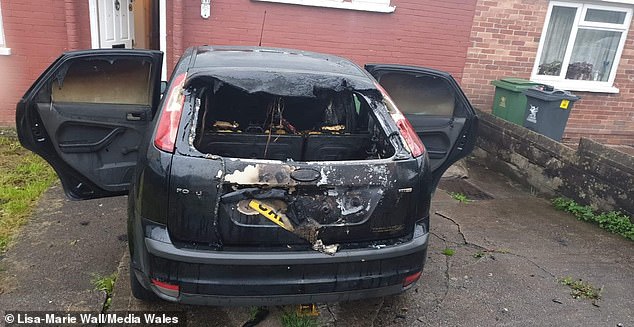 Lisa said: ‘He had a scarf over his face so the police obviously didn’t have enough evidence.’

The next day, on June 15 at about 12.45am, Lisa and her current boyfriend heard something outside.

He looked out of the window and saw her car on fire. Lisa said: ‘My boyfriend saw it outside our window. He shouted: ‘Your car is on fire’.

‘So I got out of bed shouting and crying because the car is literally three inches from the house.

‘My youngest sister was in the house.’

The fire service and the police were called and fortunately nobody was hurt.

CCTV picked up a person pouring petrol over the pavement and into the broken window of Lisa’s car. 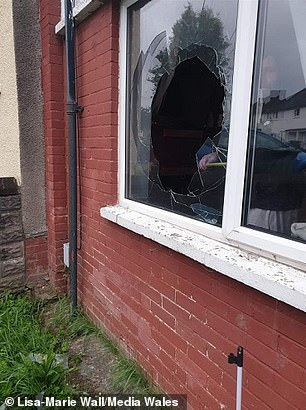 Bricks were thrown through the windows of her Cardiff house

They lit the pavement on fire and then the car. Lisa said her car was completely destroyed and she has been left shaken and afraid.

Lisa said: ‘Today the police have put me in touch with Women’s Aid. ‘They have installed a fire-proof letter box and put fire alarms in the house.

‘I’m really anxious. I haven’t got my car. I don’t want to go anywhere on my own.’

Lisa said her anxiety has been made worse because of a group of incidents involving her former partner two years ago.

In November 2017, Lisa’s then-partner stabbed a friend of hers while they were driving in a car near her home.

He was convicted of grievous bodily harm and putting a person in fear of violence.

He was sentenced to 15 months in prison and a restraining order preventing him from contacting Lisa or her friend was put in place.

On Wednesday, South Wales Police said a 28-year-old man was arrested on suspicion of arson and breaching a restraining order but was released without charge.

A spokeswoman said: ‘Protecting victims of domestic abuse is a priority for South Wales Police and a full safeguarding plan is in place for the female in this case.’