Robert Buckland said providers were legally allowed to make vaccination a condition of employment as long as they could provide a ‘clear rationale’.

He added the Government would not enforce ‘no jab, no job’ policies on care home workers, but added that it would not prevent employers blocking future contracts for those who refuse the vaccine.

All care home staff staff and residents have been offered their first jab, yet more than a quarter (28.5 per cent) have refused to take it. Uptake is worst in London, where only 54.8 per cent of eligible staff in older care homes have had a jab.

Vaccine hesitancy among black, Asian and minority ethnic groups, who make up a large proportion of care staff, is believed to be behind the poorer uptake, particularly in the capital.

Care home residents are most vulnerable to Covid because their of age and frailty, while they often suffer from serious underlying conditions including dementia. They have made up more than quarter of all virus deaths during the pandemic in Britain.

Carers, even though they are not more likely to catch or die from Covid, were among the top four priority groups for the vaccine because there is always a risk they will pass the disease onto frail residents.

Care home staff can be forced to accept the vaccine by their employers, Justice Secretary Robert Buckland (pictured) has said 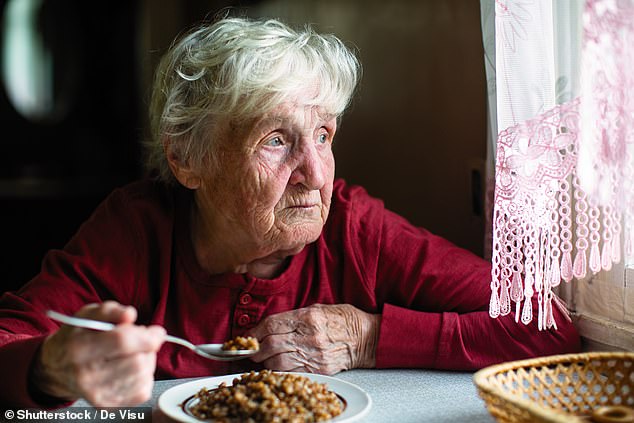 All care home staff staff and residents have been offered their first jab, yet more than a quarter (28.5 per cent) have refused to take it (stock image)

‘I think that where such conditions are imposed there needs to be a very clear rationale for them.

Plans for a night-time vaccine drive during Ramadan are being drawn up by No10 amid fears uptake among Muslims could plummet during the religious period.

Officials are concerned that vaccine hesitancy within ethnic minority groups could be even greater during the month-long fast, which lasts from April 12 to May 12.

During Ramadan, Muslims abstain from consuming food and drink from sunrise to sunset every day and some consider taking medication within those hours to be breaking the fast.

However, the British Islamic Medical Association and the majority of Islamic scholars have said getting the Covid vaccine while fasting would be permissible.

The Telegraph reports that Government sources hope to keep some immunisation centres open at night in case there are still some who don’t feel comfortable getting a daytime jab.

There will be added impetus to make sure uptake remains high among Muslims after a major report published today found Pakistani and Bangladeshi people have the highest Covid mortality rates of any ethnic groups in the UK.

Latest estimates show approximately 75 per cent of South Asians over 70 have been vaccinated compared to 90 per cent of elderly white people. Rates are thought to be as low as 60 per cent among black Britons.

It’s thought that a lack of trust in Government, misinformation on social media and communication barriers are behind poorer uptake in the UK’s minority groups.

On April 12, when Ramadan starts, shops, gyms, beer gardens and self-catering holiday homes will reopen and on May 17 pubs and restaurants will get the green light. The PM has set the target of offering a jab to everyone aged over 50 by April 15.

‘In a care home, a closed environment where there are vulnerable residents, I would argue there does seem to be an obvious rationale.

‘I think it will depend very much on each setting and the particular context.

‘That is why I don’t think it would be right to say there can be a blanket approach here because we need to go back to the fundamental fact that vaccines are not compulsory here in the UK.’

Barchester Healthcare has also said it will not hire workers who refuse the vaccine and will encourage up take by linking vaccination to bonuses, promotions and enhanced sick pay.

But Britain’s largest union Unison has accused care providers of using ‘punitive’ tactics to ensure their staff are vaccinated.

Mr Buckland also called for prison staff to be offered the vaccine as fast as possible in an interview with LBC this morning.

But proposals to prioritise people based on their occupation, ethnicity or how obese they were in the next stages of the rollout were rejected by the Joint Committee on Vaccination and Immunisation (JCVI) this morning.

The Government confirmed it will follow the ‘age-based rollout’ recommended by experts, taking a decade at a time down to age 18 rather than offering people vaccines based on their job, ethnicity or whether they’re obese.

The deputy chairman of the JCVI last week warned that the take-up rate among care home staff was still ‘far too low’.

The JCVI proposed people aged 40-49 to be next in line for a Covid-19 vaccine after meeting this morning at 11am.

It considered whether groups such as teachers and police officers should be vaccinated next, but concluded speed is of the upmost importance, while age remains a major factor in serious illness.

And speaking before the JCVI’s decision, Mr Buckland said while prison inmates and staff should not be prioritised, he was keen for them to be vaccinated in a way that ‘gives us speed’.

‘What is clear is that the need for speed is everything here. I will be supporting anything that gives us speed and maximises the impact that it has.

‘Prisons are a closed environment, like care homes. I have got to think about the welfare of staff. I am particularly anxious to make sure that prison staff get the vaccine.

‘I very much hope the JCVI will reinforce that message and allow ministers to make that informed decision as soon as possible.’