Caribbean out of season? It’s out of this world!

The turtles have been disloyal. That’s what Keilu, our water sports supremo, tells us mournfully on our first morning.

Normally, you can just snorkel out to them, but after a few days of rough seas they headed off and haven’t returned.

Keilu seems genuinely upset by their desertion. But his inability to produce aquatic reptiles on tap is more than made up for in the eyes of Finn, Ruari and Jago, our three teenage boys, by his paddle boards, sailboats and speed boat for waterskiing or whipping round the bay towing a giant inflatable sofa.

Our hotel was the first to be built in St James on the west coast of Barbados back in the Forties, next door to the winter estate of Sir Edward Cunard of Steamship Company fame.

It began life as The Miramar. When the Queen visited the island in 1985, she came for tea and a few years later it was renamed the Royal Pavilion.

Despite being a Grand Dame, it isn’t the least bit stuffy. It’s friendly and relaxed with staff more likely to join in a game of beach cricket than frown at sandy feet on the terrace.

Importantly for us, it welcomes families and there’s plenty of them, particularly in summer when both hotels and flights to the Caribbean are far cheaper than in January. And when you are less likely to bump into Simon Cowell or the Rooneys.

There’s also more chance of the odd tropical shower, but there’s the same number of hours of sunshine each day in August as there is in January.

Whenever you come to Barbados you’re likely to find a festival in full swing, but summer sees the island’s biggest. The Crop Over Festival runs from late June to early August. Originally, it marked the end of the sugar cane harvest; today it’s a celebration of calypso music and carnival. 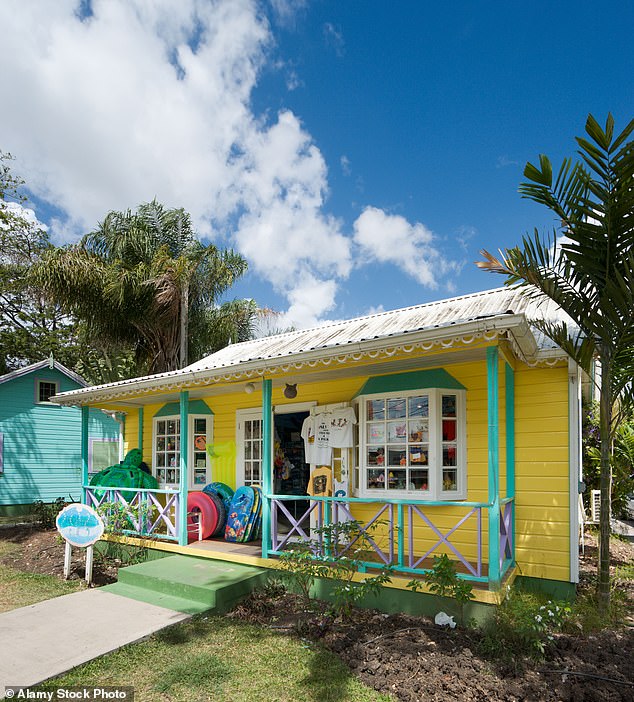 It’s hard to see a downside, particularly as I’m lying by the pool watching a troop of monkeys playing in the breadfruit trees in the acres of gardens that stretch around the hotel’s trademark pink facade.

What’s more, the buildings underwent a massive refurbishment last year. The bedrooms are now sleek, white and all of them are on the beach overlooking the water.

It’s a 20-minute walk along the sand to Holetown — an upmarket spot where Heidi Klein and Mac boutiques abut stalls playing reggae music and selling roti and jerk chicken.

Head in the opposite direction and you’re just steps away from a Barbados institution, Lone Star. One of the best known restaurants on the island, it’s right on the sand, open on three sides. Wooden, blue and white with rows of fans, whirring lazily overhead. If it wasn’t for the friendly staff, you could be in St Tropez.

BA’s lowest return fare this July and August is £400pp in economy, rising to £494 next January or February. That’s if you book now. The fare can be twice this if you leave it till November.

Summer room rates are about a third of those in January and February. At the Fairmont Royal Pavilion hotel (fairmont.com/barbados), a seven-night B&B stay in an oceanfront room costs from £2,955 in July compared with £8,990 in January.

Hiring a car from Grantley Adams International Airport costs from £176 for seven days this July, rather than £876 next January (holidayautos.com).

The Inspiring Travel Company has a ten-night B&B stay at the Fairmont Royal Pavilion Barbados in July from £2,559pp, including flights and transfers (inspiringtravelcompany.co.uk, 01244 355527). The same holiday costs £5,899pp in January.

We also enjoy nearby Ju Ju’s, a beach bar at a fraction of the price, with tasty blackened Mahi Mahi, although the boys are horrified to witness people over 30 dancing in the sand to Sunday’s live jazz band. In case we complete their mortification by joining the dancers, they decide we need to explore the coast, so we scramble over rocks and paddle through sheltered bays heading north until we came across John Moore’s.

Granted, it sounds like a bar serving all-day English breakfast in Magaluf, but don’t be put off; this is a proper rum shack, where local fisherman play dominos in the shade.

The conversation livens once they spot our sons’ cricket bat and we are soon at the centre of an impassioned discussion on how England should solve their opening batsmen conundrum. 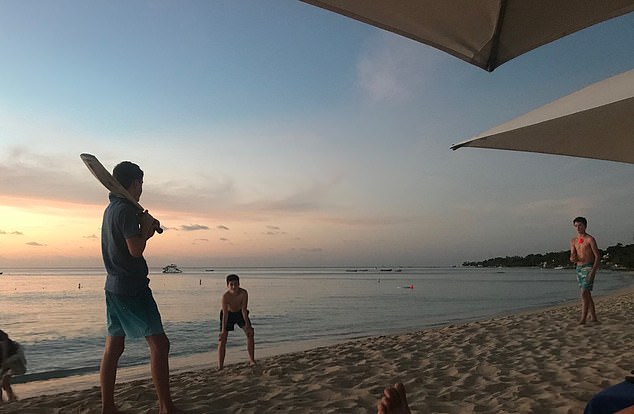 Perfect venue: The sun sets in the background as Andrea’s sons enjoy a game of beach cricket

Of course, the other way to explore is by boat. There are any number of catamaran tours and sunset trips. Our hotel arranges for Lorenzo, a local dive master, to take the five of us diving. It costs around the same price as one of the larger dive companies and when you are the only ones in the water, it’s much easier to keep track of your children.

We dive on a wreck sunk off Speightown (pronounced Spicetown) and at a nearby coral reef with an abundance of turtles, which may or may not have absconded from outside our hotel.

The boys had displayed a steely desire to visit the Animal Flower Cave. It’s firmly on the tourist trail. While the coaches in the car park are dispiriting, the change of landscape is dramatic. Here at the northern point of the island, past sugar cane and plantain fields, the Atlantic meets the Caribbean.

The trade winds have been driving waves into the coral for millennia, creating underground chambers where we swim in vast rock pools filled with sea anemones (the animal flowers). Barbados is the most easterly of the Caribbean islands and the cliffs on this side remind me of County Clare in the west of Ireland.

On our last day, we have to tear the boys away from a final game of beach cricket with Keilu and his friends, just as a steel band was striking up in the beach bar.

Even the turtles have returned to the shallow waters of bay. It’s not hard to see why.