The 54-year-old and Naomi, 52, presented clothes from the brand’s Spring/Summer 2023 collection.

Carla, an Italian French singer, actress and model, wore a matching two-piece beige suit, with a long over coat.

Her long brunette locks fell loose as the model casually rested one hand in her pocket as she strolled down the catwalk.

She previously  revealed she works out for two hours a day and practices a strict regimen of elliptical bike, Pilates and barre exercises in order to ‘stay thin.’

Earlier that day Naomi walked the runway at the Boss show, proving that she is still an A-list model despite her decades.

The shoot comes after the former French lady Carla showed off her toned physique in candid topless snaps in late August.

The French-Italian beauty stood on a balcony overlooking a stunning sea view from a tropical sunny location as she posed with her arms above her head.

She looked incredible in a semi-sheer black sarong which was draped around her waist. 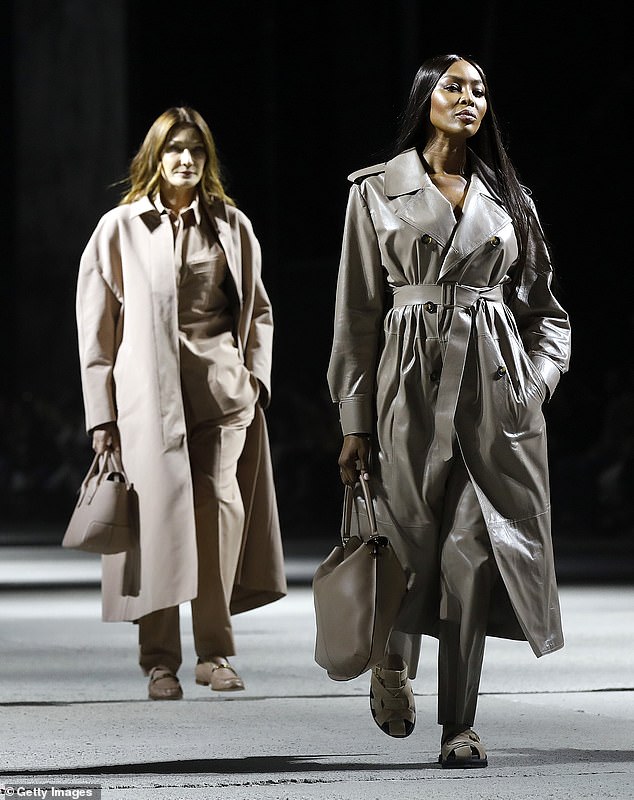 Carla and Naomi Campbell strutted their stuff down the runway of the Tod’s Fashion Show, wearing long muted trench coats

Her long brunette locks fell loose as the singer and model turned her back to the camera in the risqué snap.

She captioned the artistic looking picture: ‘Derniers rayons’ which translates to ‘Last rays’ in English.

It comes after the beauty admitted she makes ‘unspeakable efforts’ to maintain her good looks.

She revealed she works out for two hours a day and practices a strict regimen of elliptical bike, Pilates and barre exercises in order to ‘stay thin.’

Speaking to French magazine Madame Figaro, the singer and model talked about returning to the catwalk for Balmain and posing for one of YSL’s recent campaigns.

She said: ‘I have a silhouette and a style, perhaps, but I make unspeakable efforts to stay thin: two hours of sports per day, some barre, some elliptical bike, a little bit of Pilates.’ 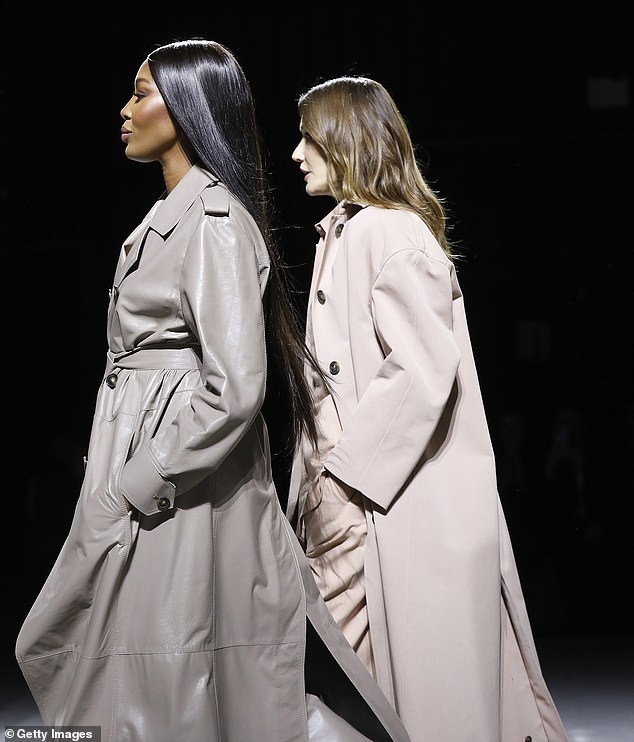 Two for the price of one: The super models wore items from Tod’s 2022 Spring/Sumer collection

But she said she didn’t have a particular relationship with beauty, and that she prefers grace and charm.

She also confessed she feels ‘too old’ to model and felt strange’ about the fact she is old enough to be the younger models’ mother.

Reflecting on her early years, the model also said she felt she was tall and lanky and felt invisible.

She talked about going through a late puberty, which made her appreciate the looks she got at the beach as a 17-year-old.

She admitted she likes to seduce and please people, but without a sexual aim, and said pleasing others was more interesting than beauty, which fades with age. 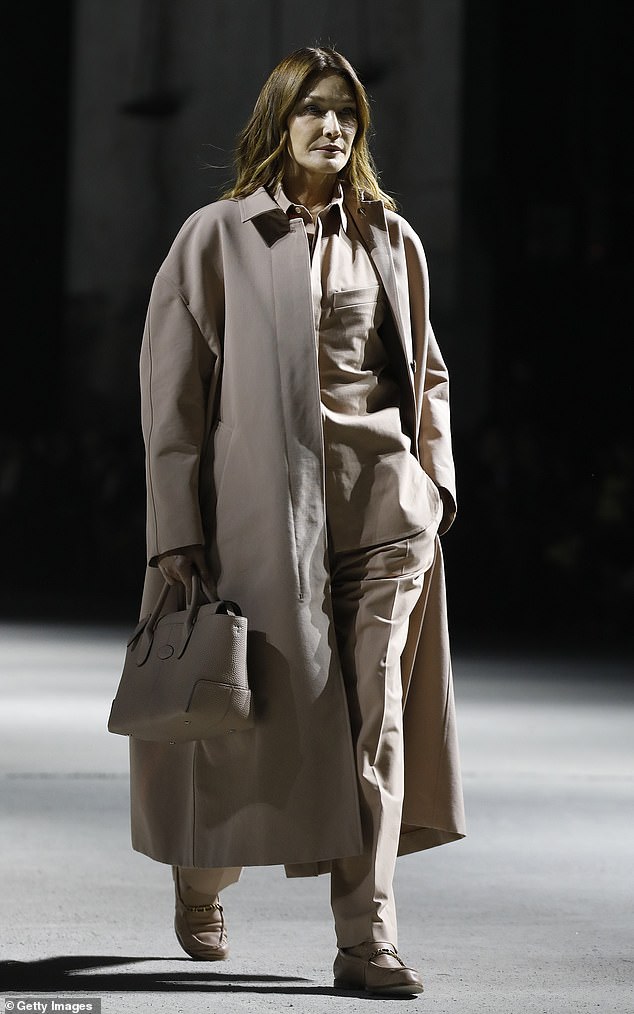 The French 54-year-old model is also a singer and actress, as well as being the former First Lady of France

The singer, who focused on her music and philanthropic activities when she lived at the Elysee Palace from 2008 to 2012 as France’s First Lady, caused a sensation when she walked the runway for Balmain in 2021.

She said that she still loves fashion and considers it a second family.

The biennial Milan Fashion is running until September 28. 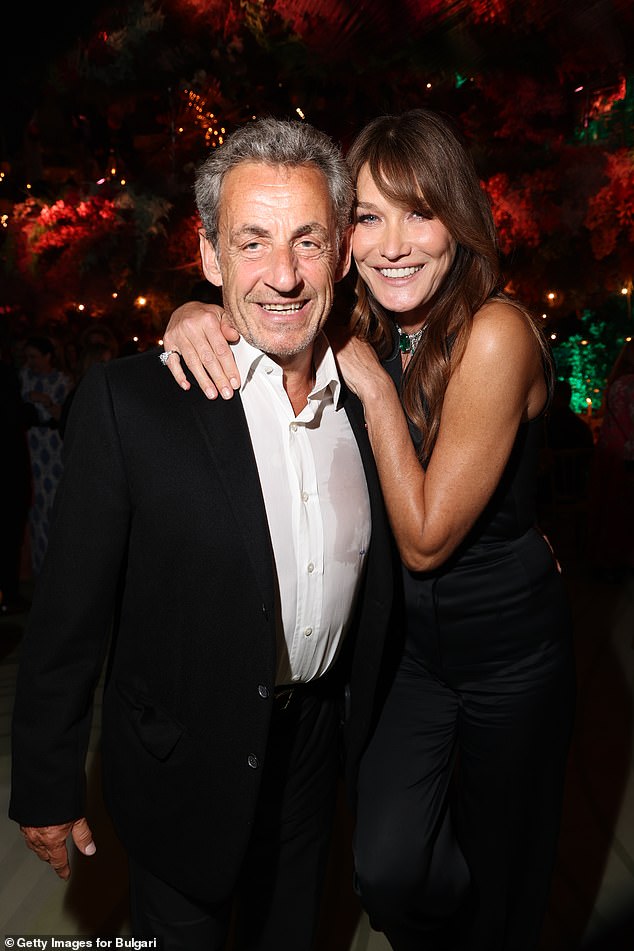 Bruni is married to France’s former president Nicolas Sarkozy, pictured in June, who was in power from 2007 to 2012

Klum, 49, showed off her cleavage in a plunging sleeveless jumpsuit with a kick-flare detail.

She added to her distinctive look with a pair of lilac heels, while a black leather handbag served as her only accessory as she made her way inside.

With vibrancy and colour top of the agenda among many of Thursday’s guests, she completed her look with mismatched red strappy heels and a neon green handbag.