Carrie Symonds wore an eco-friendly sustainable dress as she arrived to address the ‘birdwatching Glastonbury’ this afternoon.

In her first public appearance since her partner Boris Johnson became prime minister, Ms Symonds, 31, made a speech at the environmental conference in Rutland in the East Midlands.

It also marks the first time she has spoken publicly since joining Mr Johnson in Number 10.

The Birdfair event at the Rutland Water Nature Reserve is affectionately known by those who attend as the ‘birdwatchers’ Glastonbury’. 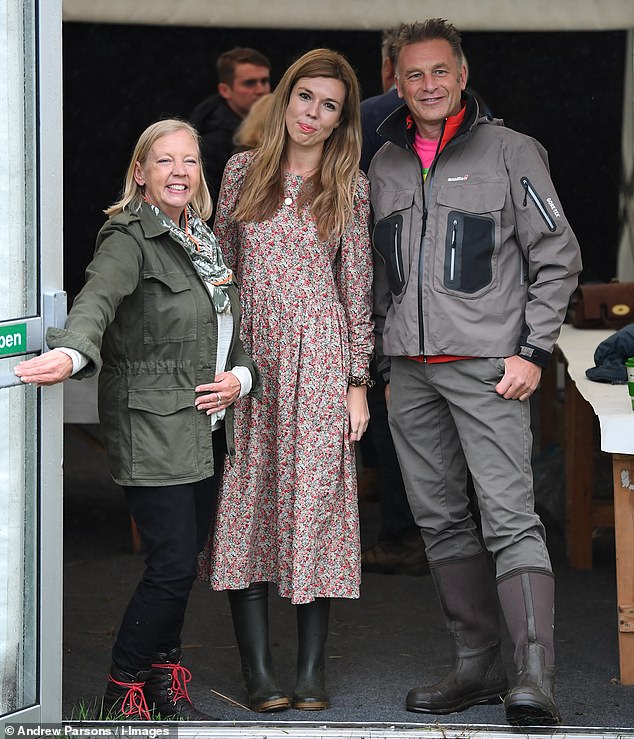 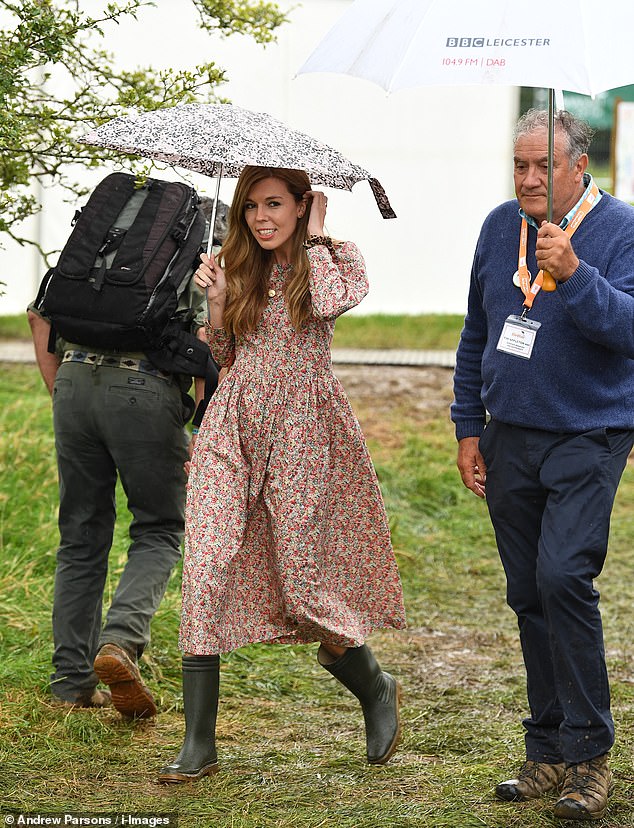 Ms Symonds had reportedly only been due to attend as a guest on a panel event alongside BBC Springwatch presenter Chris Packham and others.

But she was bumped up to having her own speaking slot and was set to address the event in her capacity as an ocean conservationist.

Ms Symonds apparently agreed to attend the event after meeting one of the organisers, Dominic Dyer, at an anti-whaling protest this year.

Ms Symonds and Mr Johnson were pictured laughing as they sat next to each other at a reception for frontline hospice staff at an event in Number 10 on Monday. 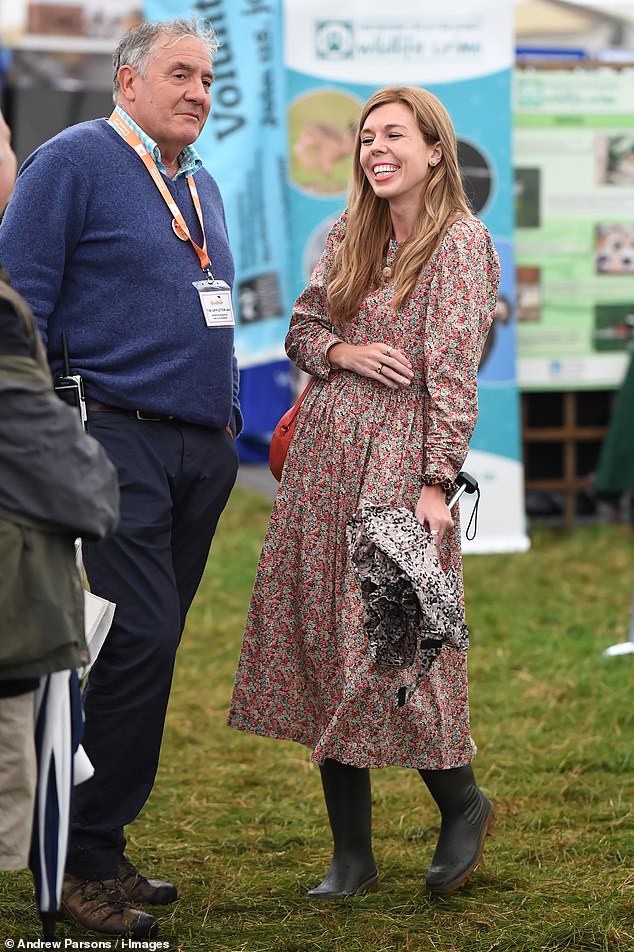 Carrie on laughing! Symonds  with guests at the Rutland-based birdwatching event this afternoon 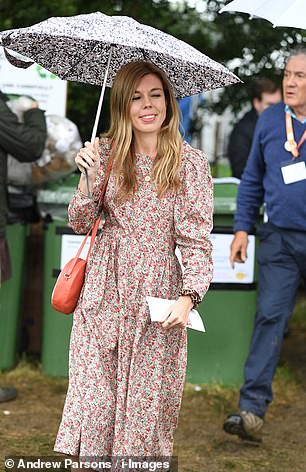 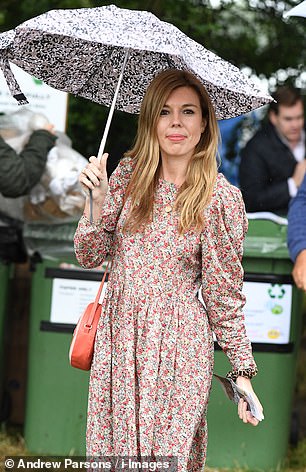 Ms Symonds had reportedly only been due to attend as a guest on a panel event alongside BBC Springwatch presenter Chris Packham and others. But she was bumped up to having her own speaking slot and was set to address the event in her capacity as an ocean conservationist

Mr Johnson, 55, was also pictured standing behind the 31-year-old with his hands on his hips as she chatted to a group of women at the event.

No 10’s official Twitter account published photographs from the event, with the caption: ‘PM Boris Johnson hosted a reception at Downing Street to thank hospice staff for their hard work, dedication and compassion.’

Miss Symonds tweeted it was ‘such a privilege to meet so many inspiring people who do such incredible work’.

The former Tory press chief, who appears to have dyed her hair a darker shade, has largely kept out of the spotlight since the Prime Minister moved into Downing Street. 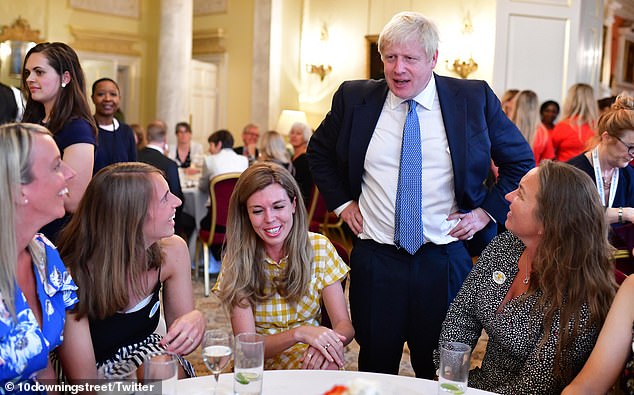 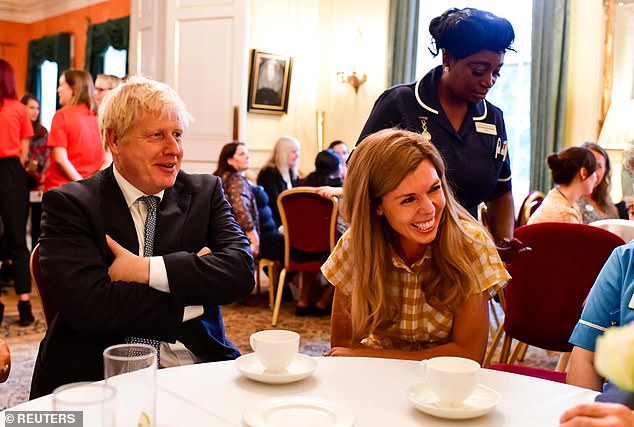 She was photographed watching his first speech as PM on the steps of No 10 last month, and was then spotted enjoying an evening out with her boyfriend at an Italian bistro.

However, no official photographs of the pair together had been released until this week.

The couple had been living together at Miss Symonds’s flat in Camberwell, south London, before Mr Johnson won the keys to Downing Street.

That flat was at the centre of a political firestorm after Ms Symonds’ neighbours recorded the couple having a row.

Mr Johnson repeatedly refused to talk about what had happened during the row. He told the BBC during the Tory leadership campaign it was ‘simply unfair’ to ‘drag’ his loved ones into politics.

Mr Johnson and Ms Symonds are now the first unmarried couple to live in Downing Street and reside in the expansive flat above No 11.

Miss Symonds worked for Chancellor Sajid Javid when he held the local government brief, as well as for John Whittingdale during his time as Culture Secretary. Following a brief spell as an adviser to Tory MP Zac Goldsmith, she was appointed to the strategic role of Conservative communications chief.

Miss Symonds quit working for Conservative Campaign Headquarters in 2018. She grew up in East Sheen, south-west London, and attended the prestigious Godolphin and Latymer School.