She delivered her own brand of empowered-female swagger with the hit single Before He Cheats.

And Carrie Underwood brought the heat all over again when she closed out CMA Fest in Nashville alongside punk legend and fellow fierce female Joan Jett on Friday night.

The American Idol winner, 36, took the stage in a high-cut leatherette romper which was bedazzled with gold accents and put her slim, toned legs on full display.

Triumphant: Carrie Underwood performed her longest set since a dreadful fall on Friday in Nashville

The eight songs Underwood made up her longest set since she star seriously injured her face in a fall on the steps of her home last November.

Among the songs performed were Church Bells, Last Name, Cry Pretty, Wasted, Undo It, Dirty Laundry, Blown Away and Before He Cheats.

Fans have been enjoying Underwood’s slow comeback to the crowds since the accident. 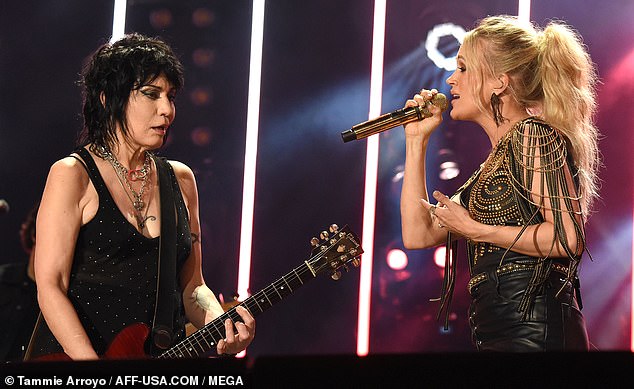 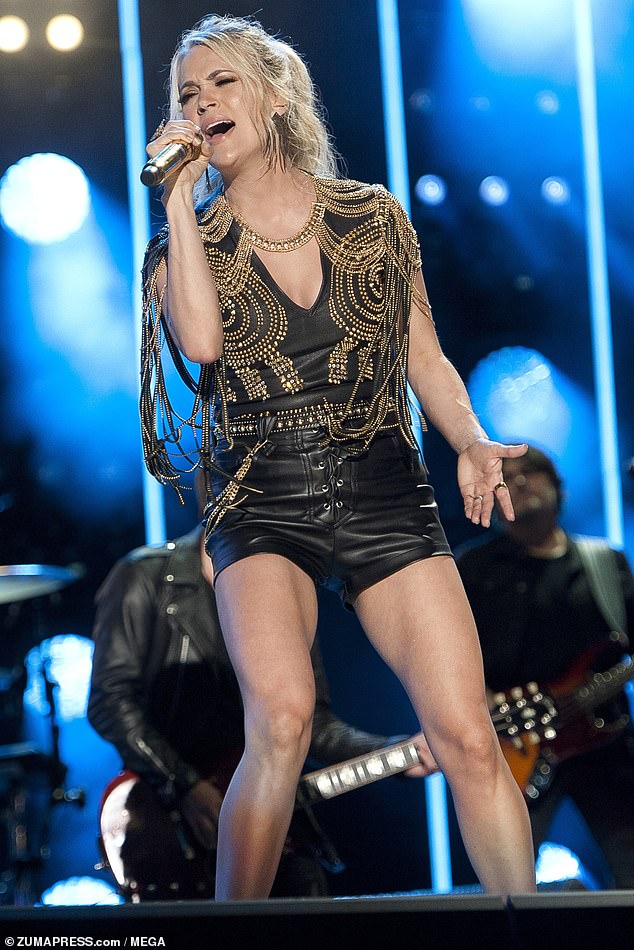 Star power: Underwood proved she could hold her own at CMA Fest even after a dreadful fall and a second pregnancy in Nashville on Friday 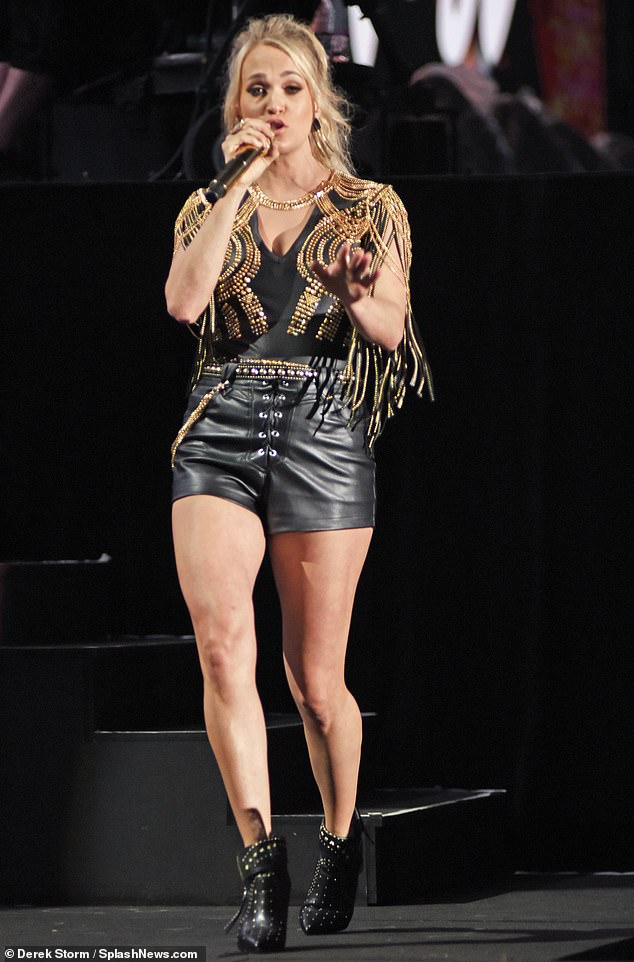 Grooving: Underwood performed eight songs as a headliner at CMA Fest in Nashville on Friday

‘Plain and simple, it was just kind of a freak accident,’ she told the Today show, as reported by Billboard last year.

‘I just tripped taking my dogs out to do their business, so it could’ve happened to anybody. I say if I had fallen anywhere else, it wouldn’t have been a problem, but it was just one step that I went to catch myself on and I missed,’ she said.

On an interview with iHeartRadio’s The Bobby Bones show, Carrie revealed that she needed 40 facial stitches and surgery to repair a broken wrist. 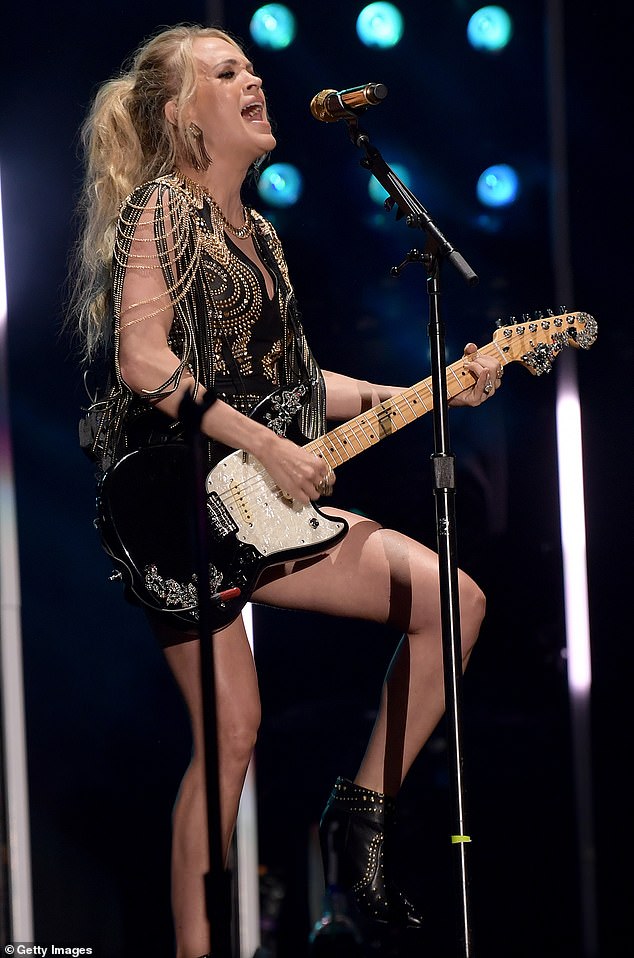 Raw talent: Underwood picked up her guitar during a performance on Friday that included her hits ‘Before He Cheats’ and ‘Last Name 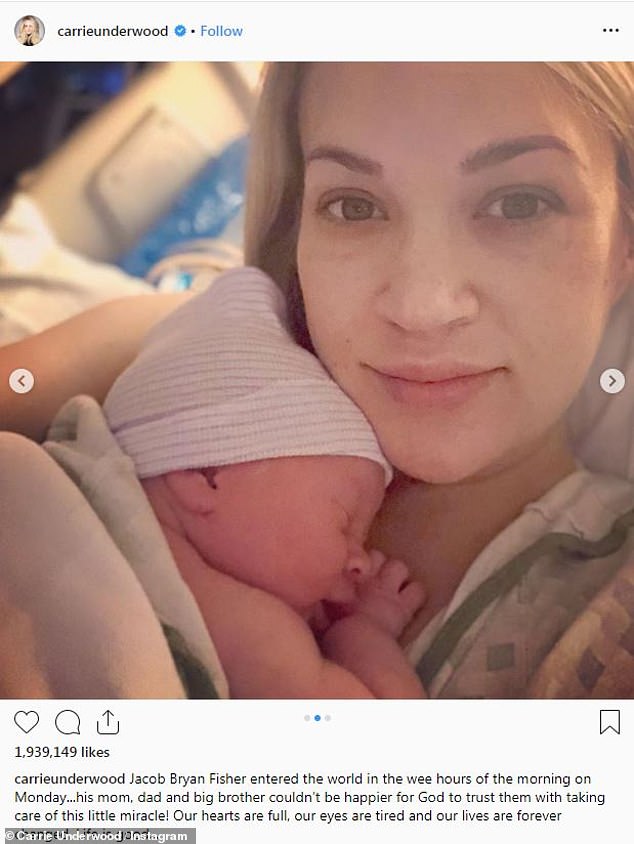 During her time on stage, the songstress wasn’t afraid to poke a little fun at her second role as mom.

‘We might need to change the words to “Sweaty Laundry.” I know I do… mom joke,’ she joked, according to Billboard.

She gushed about her newborn in an interview with E! News: ‘He’s such a smiley baby … his snuggles. I just like to smell him—that might be weird. Sometimes, I’m like, “I just need to smell my baby.” He’s getting a little chub—like little chubby legs. Just pinching at his chub is real sweet.”