As she launches into her three-month rap concert tour, 15-year-old ‘cash me ousside’ girl Danielle Bregoli has landed smack dab in the middle of another feud – this time between her mother and her sheriff’s deputy dad, DailyMail.com has learned.

Ira and Barbara were never married, but their never-ending battles have become the stuff of legend in the Boynton Beach area, just south of President Donald Trump’s Mar-a-Lago winter hangout. 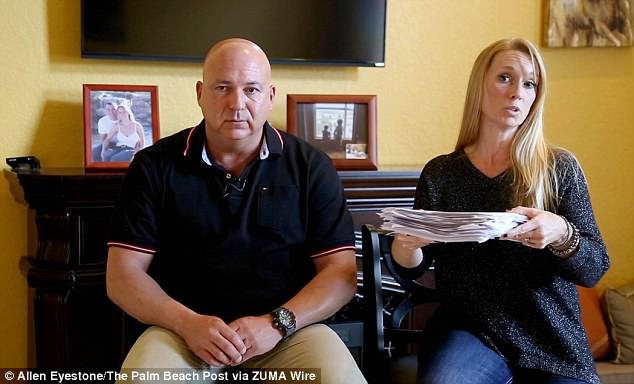 In his hand-written petition filed to the court, Peskowitz, who is married to another woman (above) and has two children with her, claims Barbara  made death threats against his wife and other family members 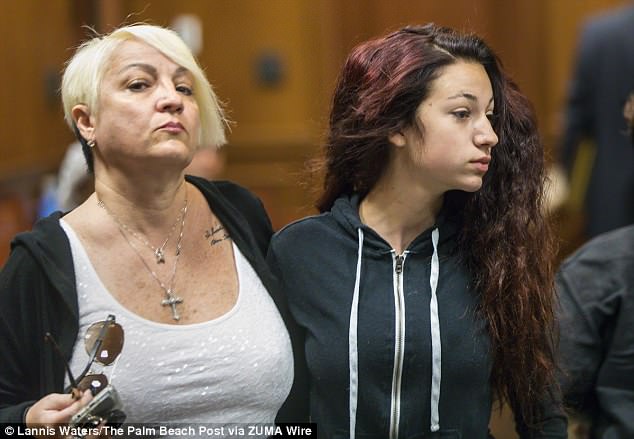 Danielle  and her mother, Barbara Bregoli leave court after a hearing in juvenile court last year

This time, a hearing has been scheduled for April 24 to discuss Peskowitz’s allegations, including that Barbara has been using her online skills to make his life miserable.

‘It’s become unbearable,’ Peskowitz tells Dailymail.com in an exclusive interview. ‘There are non-stop calls, hundreds of emails, letters and threats from Danielle groupies who claim they want to beat me up and kill my other children.

‘Barbara is instigating the whole thing and it wreaks havoc in my life. I’m studying for the sergeant exam. I don’t need this.’

In his petition for an order that would place Barbara in criminal jeopardy if she contacts Peskowitz for any reason, the deputy claims Barbara once went after him with knife.

In his hand-written petition filed to the court, Peskowitz, who is married to another woman and has two children with her, claims Barbara made death threats against his wife and other family members.

‘The respondent (Barbara) has an obsession with cyberstalking on social media, blogs and articles,’ Peskowitz wrote. 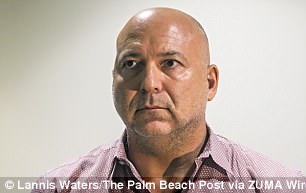 In his hand-written petition filed to the court, Peskowitz, who is married to another woman and has two children with her, claims Barbara made death threats against his wife and other family members

He added Barbara has accused him of various crimes on social media and even announced to the world he was diagnosed with a mental illness.

In the paperwork, he says Barbara exposed the identity of the adopted Peskowitz’s biological mother.

‘My biological mom is 70 years of,’ Peskowitz told dailymail.com. ‘Why would Barbara tell everybody online who she is?’

What’s more, the petition claims Barbara made more than 20 complaints against his integrity as a lawman with the sheriff’s office Internal Affairs unit, the Florida Department of Law Enforcement and local police, all of them false.

While Peskowitz didn’t explain this on his request for a restraining order that would force Barbara to stay at least 500 feet from his place of work and residence and 100 feet from his car as well as ban any digital and electronic contacts, he claims Barbara recently told fans they could face-time with Danielle.

Peskowitz claims Barbara gave out his cellphone number instead of Danielle’s, and he received 200 face-time calls that day from fans hoping to talk to her one-on-one.

According to records, Peskowitz and the 50-year-old Barbara have been duking it out in various courts since 2003, when Barbara originally filed a paternity lawsuit over the then-infant Danielle.

The case is still open and has now grown to 749 separate motions, orders and filings. There have been legal arguments over visitation rights, squabbles over his $1,100 monthly child support and back-and-forth over phone calls to out-of-control Danielle.

Bhad Bhabie, better known as the ‘Cash Me Ousside’ girl, posted on Instagram yesterday after her performance in Santa Ana, California, the first show in a two-month US to

In October, Peskowitz surrendered his parental rights and was allowed to stop paying for child support after he argued in court the teenager was making enough money as a celebrity.

When asked by telephone about the restraining order and upcoming hearing, Barbara Bregoli said she didn’t know anything about it.

‘More power to him,’ she said.

Danielle Bregoli found instant celebrity in September 2016 when she and Barbara were the featured interviews on a Dr. Phil show about bad teenagers.

The conversation got so heated that Danielle, then 13, turned to the studio audience taunting her about her rebellious ‘street’ nature that led to several arrests and let out what would become her catchphrase: ‘Cash me ousside, howbow dat?’

Of course, what she meant to say was: Catch me outside, how about that?

The Dr. Phil video was turned into countless Internet memes, and Danielle jumped on the social media wave, something she rode all the way to a musical act.

Going by the stage name Bhad Bhabie, Danielle kicked off a 32-date rap tour in Santa Ana, Calif., over the weekend. Her Bhanned In The USA tour will take her through Hollywood, San Antonio, Miami and New York, among other cities, before heading to Europe for its summer festival season. 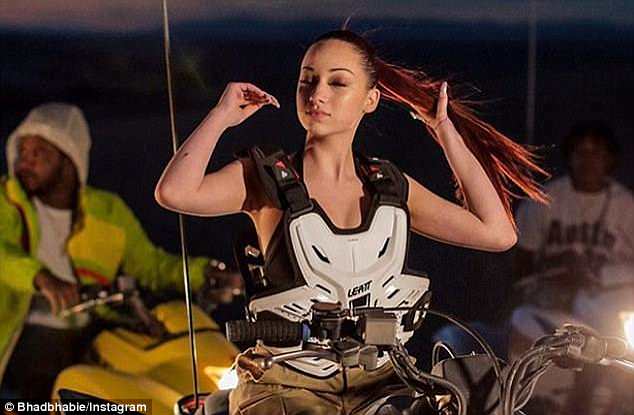 The viral sensation’s debut show at The Observatory in Santa Ana, California, on Saturday night was the first of 32 performances on her ‘Bhanned in the USA’ tour 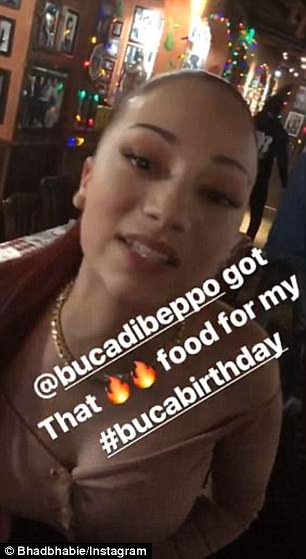 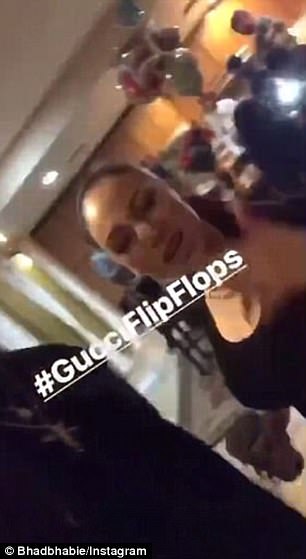 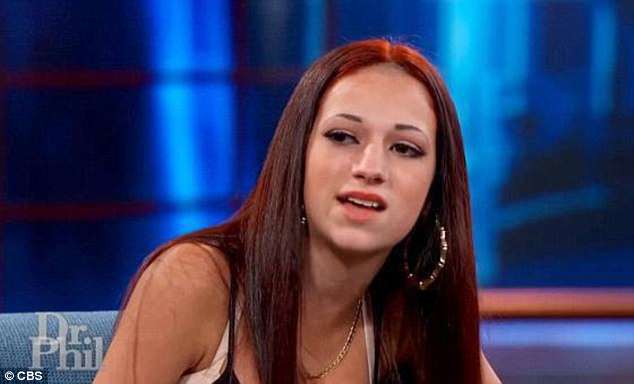 The 15-year-old, who was born Danielle Bregoli, found fame in 2017 when she told Dr Phil to ‘cash me ousside, how bou’ dah?’ while discussing her ‘bad attitude’ on the show

Last month she announced that she was no longer on probation, after she pleaded guilty last year to to multiple charges, including grand theft and filing a false police report.

She was reportedly spared serving the rest of her probation after lawyers convinced the courts that she had stayed out of trouble and finished the 100 hours of community service.

And three weeks ago she celebrated her 15th birthday by releasing her new song ‘Gucci Flip Flops’ featuring Lil Yachty.

It followed two songs she released in 2017 – ‘These Heaux’ and ‘Hi bich’ which both made appearances on Billboard’s Hot 100.

‘Tomorrow is my birthday. Lot of people hit me up n asked what I want, but for real I already got it,’ the teenager told her 13million Instagram followers in March.

She rose to fame when she appeared on an episode of Dr Phil with her mother in a segment entitled ‘I Want to Give Up My Car-Stealing, Knife-Wielding, Twerking 13-Year-Old Daughter Who Tried to Frame Me for a Crime!’.

Frustrated with the audience’s negative reaction to her, she said: ‘Cash me ousside, how bow dah?’.