Caster Semenya will be unable to defend her 800m Olympic title next year after losing her appeal to Switzerland’s Federal Supreme Court against testosterone regulations in female runners.

Under rules introduced by World Athletics, and supported by the Court of Arbitration for Sport last year, athletes with ‘differences of sexual development’ (DSD) are not allowed to compete between 400m and a mile without taking testosterone-reducing drugs.

South Africa’s two-time 800m Olympic champion Semenya has been pushing through the courts to overturn the ruling but is now unlikely to run at the Tokyo Games unless she qualifies in the 200m.

Semenya said: ‘I am very disappointed. I refuse to let World Athletics drug me or stop me from being who I am.

‘Excluding female athletes or endangering our health solely because of our natural abilities puts World Athletics on the wrong side of history.’

Semenya, who was assigned the female gender at birth and was raised female, is actually believed to be intersex due a genetic condition which means she has both X and Y chromosomes, a trait usually found in men.

The vast majority of women have only X chromosomes.

The condition leads to elevated levels of testosterone – the male sex hormone, which also plays a role in increasing muscle growth.

While the exact effect of excess testosterone on an athlete’s performance is unclear,  it is thought to provide an advantage in some sports.

Ross Tucker, an internationally-renowned sport scientist, has estimated that Semenya could be up to seven seconds slower if she lowers her testosterone levels. 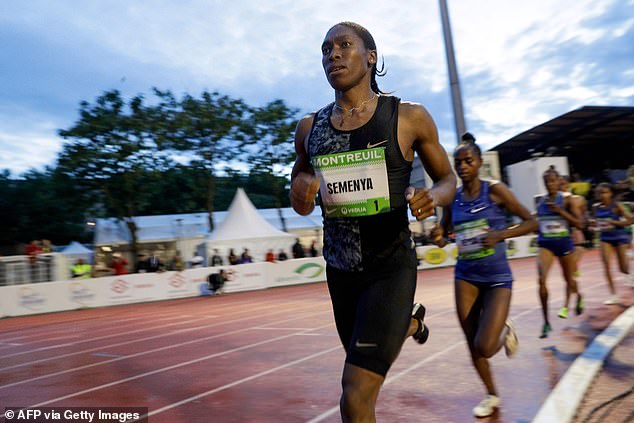 The Swiss Federal Tribunal said CAS ‘had the right to uphold the conditions of participation issued for female athletes with the genetic variant ’46 XY DSD’ in order to guarantee fair competition for certain running disciplines in female athletics.’

The federal court said it was limited to examining ‘whether the CAS decision violates fundamental and widely recognised principles of public order. That is not the case.’

The federal judgment came more than a year after the two-time Olympic 800m champion lost a previous ruling from the same court.

That July 2019 verdict overturned a temporary ruling which had allowed Semenya briefly to compete in the 800 meters at international events without taking testosterone-suppressing drugs.