This cat likes to slob around in bed while watching his favourite TV show – and he does not take kindly to being disturbed.

However after being disturbed, Bizon turns around and gives his owner a very unimpressed look.

The cat looks almost human and its expression is hilarious when inconsiderate noisy people distract him from the screen.

Ann, from Bulgaria, said: ‘My cat attentively watches TV and this does happen quite often.

‘He doesn’t react to the shows, he just watches them. But he can only watch something on TV for a long time if it interests him.

‘He was watching this show for about 20 minutes, before he fell asleep.’ 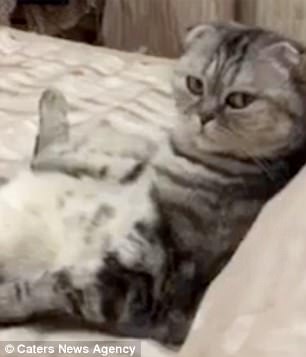