Catalonia’s sacked president Carles Puigdemont has vowed to resist the Spanish government’s attempts to snatch control of his region as tensions rose over its dramatic breakaway bid.

Carles Puigdemont, seen with his wife Marcela, has vowed to resist the Spanish government’s attempts to snatch control of his region as tensions rose over its dramatic breakaway bid

Rajoy is seeking to solve the country’s biggest constitutional crisis since the 1981 coup attempt by imposing direct control.

It remains to be seen if local officials will accept the Spanish government’s attempt to impose its will or continue to recognise Puigdemont’s authority. Activists say they will form human chains around government buildings.

‘What are they going to do: kill all of us,’ asked one member of a Left-wing separatist group.

‘If the Spanish police start to fight us it will be our victory, although no one wants this violence.’

As thousands of Catalans celebrated following their parliament’s backing for independence last Friday, a pro-independence radio station was attacked by angry opponents.

Yesterday, Catalan officers stood guard around the region’s parliament in Barcelona as violence threatened to erupt.

In Madrid, thousands of unionists brandishing Spanish flags took to the streets demanding Puigdemont be jailed.

The Catalan National Assembly, the main separatist group whose leader has been arrested, is urging the region’s 200,000 civil servants not to follow orders from Spain and a ten-day general strike has been called by one major union. 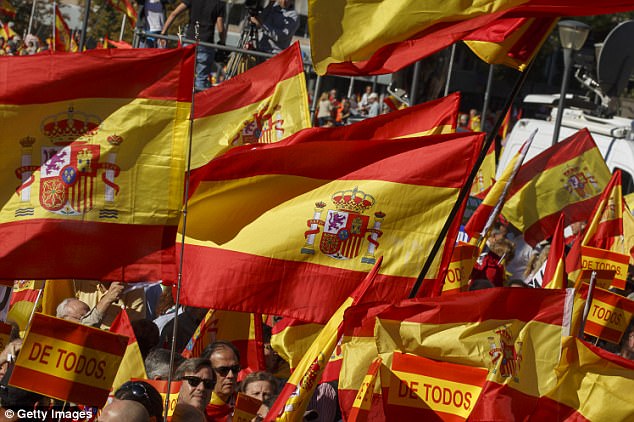 Some workers insist they will stay loyal to Catalonia. ‘We have to resist,’ said one fireman.

‘I will not work with the Spanish police,’ said a regional police officer in Girona, one of several that has already removed the Spanish flag from its city hall. ‘I will take sick leave or time off unpaid.’

Spain is especially nervous over the 17,000-strong Catalan police force. Josep Lluís Trapero, the Catalan police chief, was demoted at 4am yesterday. His senior officers met with the region’s interior minister yesterday to discuss tactics. Trapero has urged ‘loyalty’ to the new authorities.

Yet this armed force, like the region, is divided over independence. Official opinion polls have never shown a majority for independence, with a recent slide in support to little more than one-third of the population.

Separatists say their referendum delivered a mandate for secession, although it was declared illegal and less than half the electorate turned out to vote. They say 90 per cent of those voting backed independence.

The crisis has led to an exodus of firms moving legal headquarters from Catalonia, the country’s most prosperous region, and is hurting Spain’s economy. Tourism has also been hit hard, with a sudden 15 per cent fall.

For older voters, the shadow of Civil War that led to the Fascist dictatorship of General Franco looms large over this crisis.

‘Madrid has humiliated us,’ said Montse Abelló, 85, who switched to supporting independence after hundreds were hurt when voting in clashes with national police.

‘I do not think we face another war but I fear we are going to suffer again.’

Western leaders remain firmly in support of Madrid. Britain joined Germany, France, Italy and the US in saying they will not recognise a sovereign Catalonia.

‘Nothing changes. Spain remains our only interlocutor,’ said EU president Donald Tusk. ‘I hope the Spanish government favours force of argument, not argument of force.’