This is the moment a woman uses a hidden camera to spy on her two boyfriends to test their loyalty to her, despite neither of them knowing about each other.

The unnamed woman, who is believed to be from California, enlisted the help of YouTube channel To Catch a Cheater to find out if either of her boyfriends would cheat on her, despite neither of the two men knowing about each other.

It starts with the girl saying she wants to put both of them to the test to see which one is more loyal but she doesn’t end up with the result she expected.

She predicts that one of her boyfriends will be unfaithful but does not let on who that will be.

The first boyfriend, Steve, is planted to wait for his girlfriend in an park when an actress, who has been enlisted to entice him to be unfaithful, approaches him saying how much she loves his shirt.

The stooge strikes up conversation by asking if he is alone to which he replies: ‘Yeah I just…I’m waiting.’

So far no mention of his girlfriend.

He even gives the stooge a fake name to continue the conversation, telling her his name is Micheal as his girlfriend watches horrified back in the studio.

They continue the conversation with Steve commenting that people tell him he looks like actor Zach Braff from the ABC comedy show Scrubs.

As the actress gazes at him dressed in a skin tight black dress and thigh high burgundy boots, she asks him what he does for fun at the weekend.

He says: ‘Every now and then when the weekend comes around it’s always fun to let loose a little bit’ 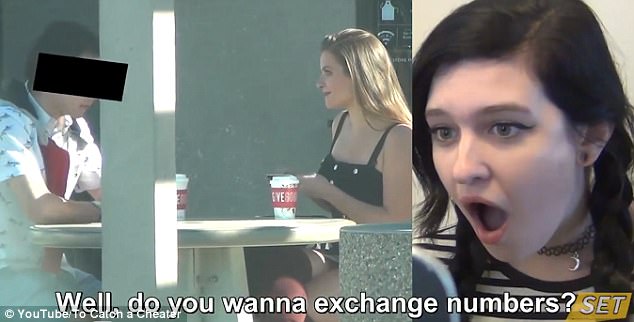 She is left shocked when the first boyfriend Steve, who she thought would be faithful, offered to give the actress his number and told her he was single

When the actress presses further to find out if he will admit if he has a girlfriend or not he says: ‘No, you got not… no worries, yeah I’m free.’

The girlfriend’s mouth drops to the floor when he then says he is single and willingly hands over his phone number.

In a shocking turn of events, the unfaithful boyfriend agrees to go straight from the park to his nearby house to spend time alone with her.

Even more shockingly, he asks the stooge if she is a prostitute because she is so forward with him before asking if he can have a kiss, much to his watching girlfriend’s disgust

Astoundingly, Steve asks the actress if she is going to be expecting payment for their time together, insinuating that she is a prostitute.

When she laughs it off and tells him she isn’t Steve then brazenly asks for a kiss from her and she obliges.

Watching it all on a laptop in an apartment, the girlfriend brands Steve a ‘cheating scumbag’ and says that she expected him to pass the test.

The visibly distressed girl then says she does not expect her other boyfriend to pass the same test using the same model. 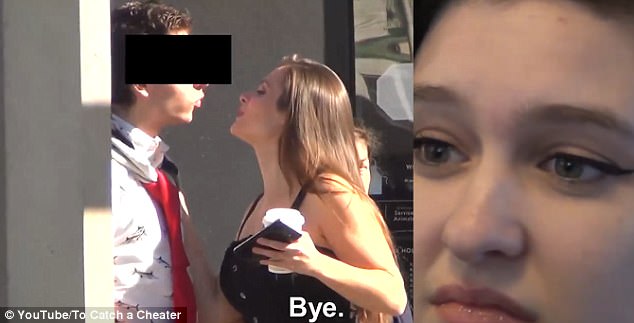 After branding Steve a ‘cheating’scumbag’ she declares that she doesn’t think that the second boyfriend, Darnell, will pass either

The actress ups her game for the second boyfriend Darnell by wearing a tiny pencil skirt and a crop top and covers him eyes to surprise him from behind.

She feigns that she thought he was her friend and asks to sit next to him to begin her test.

The fake flirt tells him he is gorgeous and asks if he is a model but Darnell doesn’t take the bait. 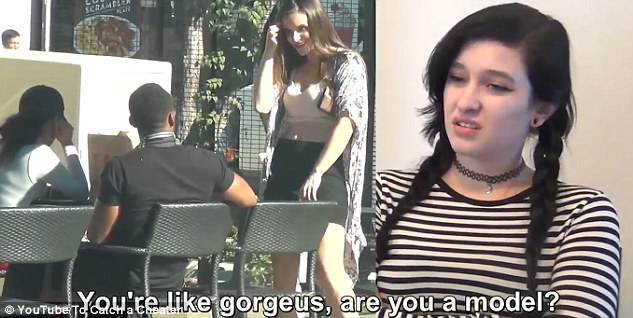 Using a classic technique of feeling the man’s arm to flirt with him,  the stooge even tries to sexually touch him to convince him to cheat 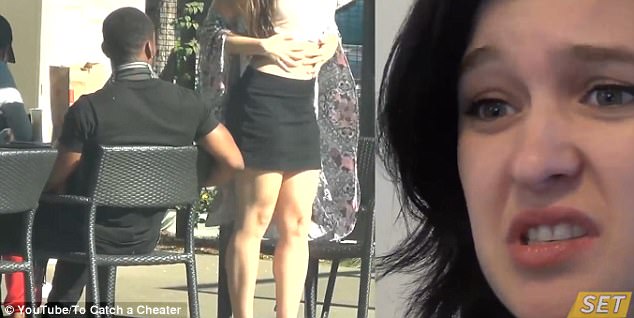 The faithful boyfriend, who was previously in the military, immediately tells her that he is waiting for his girlfriend.

The scantily clad actress begins to stand up and show off her body to him asking her if he could help her tone up in the gym.

Clearly thinking something is amiss, the shrewd man begins looking around and asks: ‘This is going to sound weird but did somebody put you up to this?’ 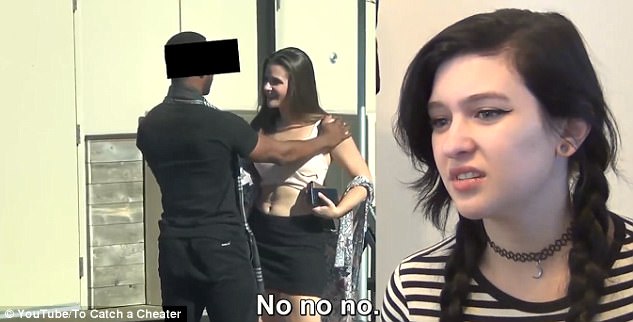 Put off by her antics he decides to leave and even refusing to hug her goodbye by pushing her away.

Despite passing the test, his girlfriend is still unimpressed with Darnell and starts to make excuses for Steve because ‘he’s f******g good in bed’ and she will ‘have a stern talk with him’ about the footage.

The video ends with the host of the channel telling her she needs help when she decides to choose Steve instead of Darnell despite the results of the expermiment.

It is unknown if she is still in a relationship with either of the men.

She continues to make excuses for her cheating beau, refusing to believe that he would so something so sleazy behind her back