Catherine Tyldesley gets slapped with a parking ticket

She announced her decision to leave Coronation Street at the beginning of December, following seven years on the ITV soap.

But before she makes her onscreen exit, Catherine Tyldesley will join her co-stars at the National Television Awards and ensuring she looks her best for the night, she was seen paying a visit to dress designer Zeynep Kartal in Manchester on Sunday.

The actress, 34, was seen stepping out with her two-year-old son Alfie, but found herself slapped with a parking ticket as she got caught in the snow.

Prepping for the big night: Catherine Tyldesley was seen paying a visit to dress designer Zeynep Kartal in Manchester on Sunday with her two-year-old son Alfie, ahead of the NTAs

Heading out in into the city centre in the less desirable weather, Catherine was seen clutching onto her tot in her arms, as he accompanied her to her dress fitting.

The blonde beauty cut a casual figure for her low-key outing and paired together dark jeans with a warm tailored coat and knitted scarf layered around her neck.

Catherine sported mink ankle boots on her feet and left her lightened locks to fall down past her shoulders in a poker-straight style. Despite having a two-year-old to contend with, she looked nothing but glamorous and sported a flawless make-up look.

Little Alfie, meanwhile, looked cute as a button while clad in yellow tracksuit trousers and a pastel blue rain mac. He appeared perfectly at ease while in his mum’s arms, with his cheek and nose looking slightly reddened by the chillier climes. 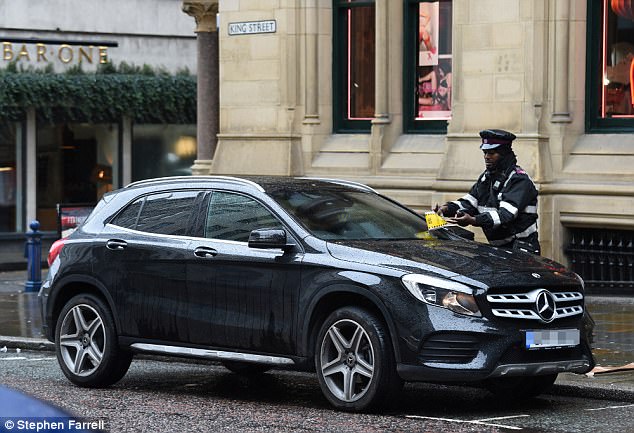 Oops: The actress, 34, no doubt had her day dampened as she was slapped with a parking fine, as a traffic warden was seen ticketing her Mercedes 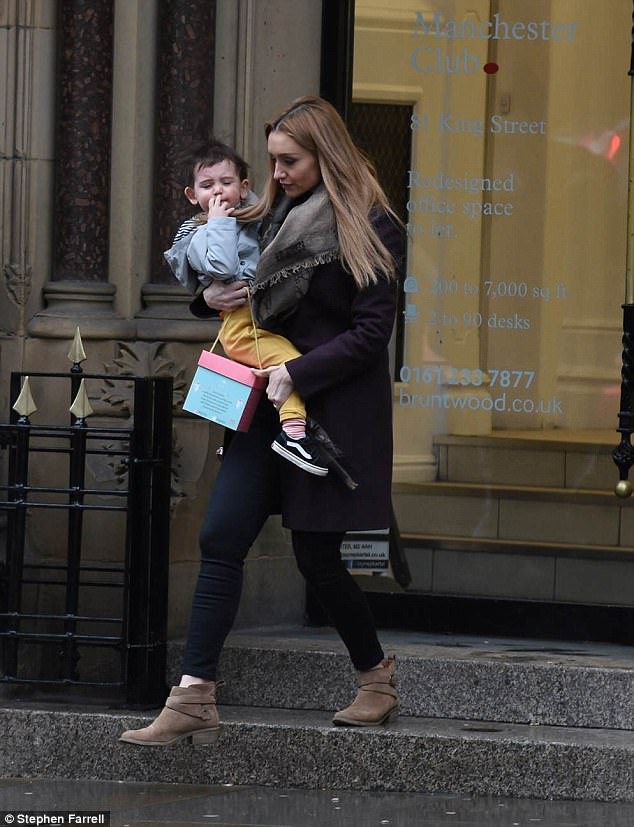 Chic: Heading out in the city in the less desirable weather, Catherine was seen clutching onto her tot in her arms while cutting a casual figure in dark jeans and a warm tailored coat

Catherine shares Alfie with her husband Tom Pitfield. The duo married in May 2016, nearly two years after announcing their engagement.

Catherine, meanwhile, was faced with a parking fine as she returned to her car, following her shopping trip, after a warden was seen issuing her Mercedes with a ticket.

MailOnline have contacted a representative for Catherine.

The soap star announced her exit from Coronation Street at the beginning of December, insisting walking away from the show had been a ‘difficult decision’ for her to make.

Speaking to The Sun, Catherine revealed: ‘Coronation Street has been a dream job for me which is why this was such a difficult decision to leave.

‘Eva has been such fun to play over the last seven years, and who knows, one day she might storm the cobbles of Weatherfield again.

‘In the meantime I’m excited about the future, new acting projects, and spending time with my family.’

Catherine has played the role of Eva for seven years, and has announced her exit in the same week that her co-star Shayne Ward also announced his departure, with show bosses hinting at an ‘explosive exit’ for the duo, but not necessarily together. 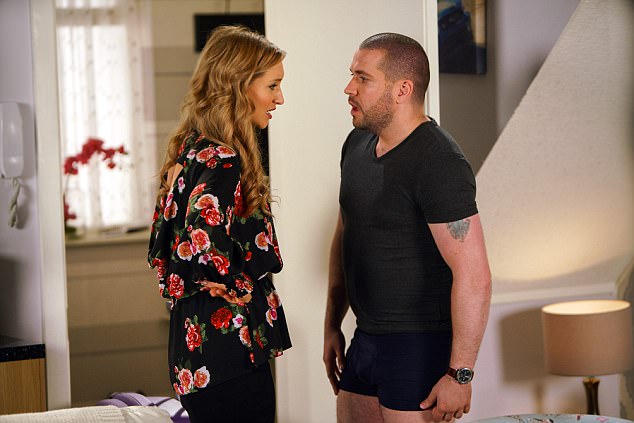 Moving on: The soap star announced her exit from Coronation Street at the beginning of December, insisting walking away from the show had been a ‘difficult decision’ for her to make

She left the show for a brief stint in 2014/2015 – she took maternity leave whilst pregnant with her first child. She went back to work in July 2015 and Eva reappeared on-screen that September – when she began her tryst with Shayne’s Aidan Conner.

‘Cath’s portrayal of Eva Price has made her a firm favourite amongst fans and she will be missed.

‘The producers and writers are currently working on her exit storyline which will be on screen in early summer.’

Show bosses have said of her exit: ‘Nobody will see this coming. Viewers are going to be absolutely stunned.

‘It’s going to be a blow for the fans – but also a massive TV moment.’