Catherine Zeta-Jones has revealed she was ‘devastated’ by the sexual harassment allegations made against her husband Michael Douglas.

Catherine described how she was ‘torn about where my absolute morals lie’ following the allegations, but said ‘there was nothing to back it up at all.’

The mother-of-two also admitted that she and Michael have ‘had ups and downs in our marriage’, but added ‘I don’t throw the towel in very quickly on anything.’

Michael denied the sexual harassment allegations made against him in January this year, saying: ‘This is a complete lie, fabrication, no truth to it whatsoever.’

A former employee alleged he masturbated in front of her, with the actor and producer deciding to come forward himself with the claims – because his children, Dylan, 18, and Carys, 15 – feared he would be labelled a sexual predator.

Speaking about the allegations, Catherine told the Sunday Times Magazine:’My children and I were profoundly devastated by those allegations. And I was torn about where my absolute morals lie.

‘This woman came out of nowhere and accused my husband. I had a very big conversation with him, with the kids in the room, and said, “Do you understand if more comes out…”‘ 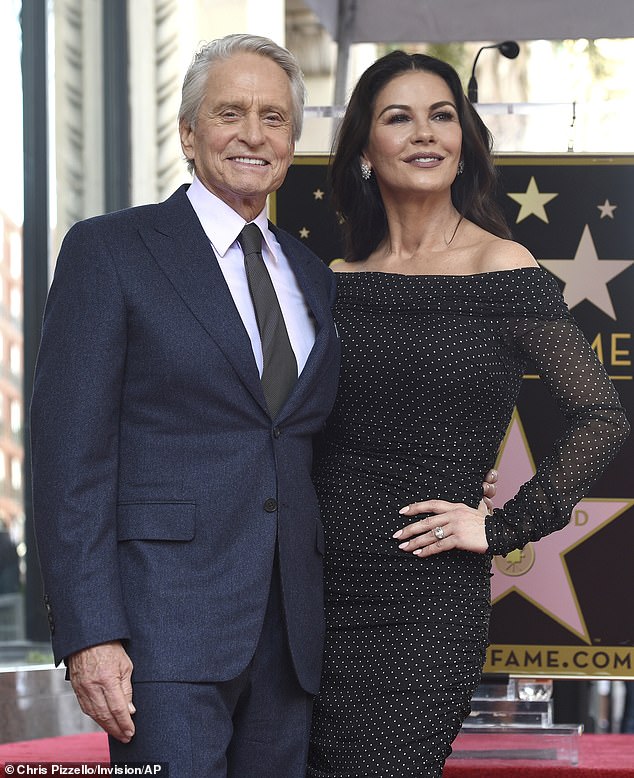 Catherine, 49, said she was forced to have a ‘very big conversation’ with her husband Michael, 74, (together at a ceremony at the Hollywood Walk of Fame this month) after a former employee came forward earlier this year to say Michael had masturbated in front of her

Explaining how Michael had reassured the family about the claims, she said: ‘By telling us that there is no story here and that time will tell. And, of course, it did. There was nothing to back it up at all. For any accusation that comes out that isn’t backed up, that knocks the movement back 20 years.’

In January, Michael decided to come forward himself with the allegations, after being approached by the Hollywood Reporter.

The Wall Street star revealed he was approached about the allegations just before Christmas – and on the same day his son Dylan was accepted to college.

He told Deadline: ‘When we were all ecstatic… (then) I got a message from my attorney that The Hollywood Reporter wanted to do a story about an employee that worked for me approximately 32 years ago. 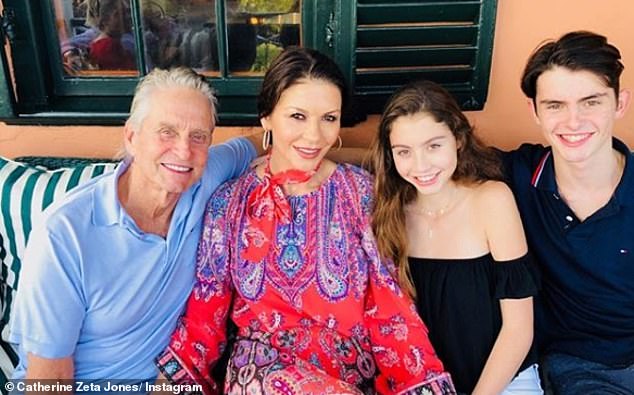 Catherine explained how she had confronted Michael about the allegations while their children Dylan, 18, and Carys, 15, (above with their parents last year) were in the room

Michael said the allegations that he masturbated in front of her was a ‘complete lie’.

He added that his family had been left with the consequence of embarrassment and shame following the claims.

‘The part that hurt the worst is having to share something like this to your wife and your children,’ he said.

‘My kids are really upset… have to go to school worrying this is going to be in some article about me, being a sexual harasser. They’re scared and very uncomfortable.’