Amazing Cave of the Crystals in Naica, Chihuahua (Mexico) 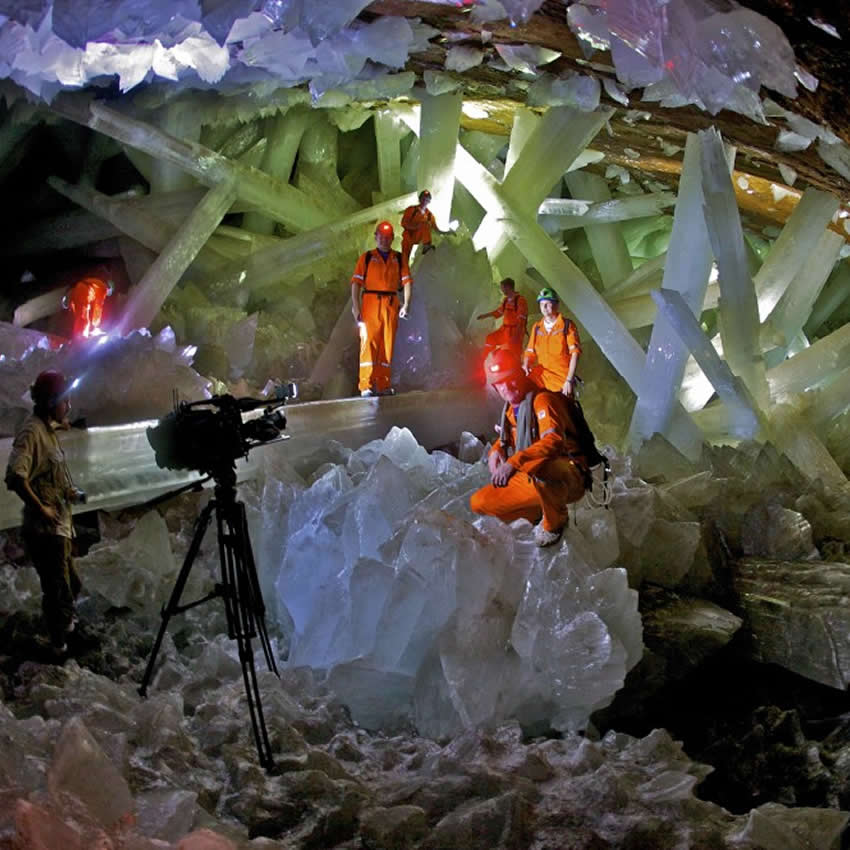 Cave of the Crystals or Giant Crystal Cave (“Cueva de los Cristales”) is a cave connected to the Naica Mine 300 metres (980 ft) below the surface in Naica, Mexico.

Cave of the Crystals is located 290 metres below the land surface. Cave room is shaped like a horseshoe, approximately 10 by 27 m large.

Most peculiar feature here is the giant crystals of selenite (gypsum crystals, CaSO4·H2O). The largest of these crystals is 11 (12?) m long, has a diametre of 4 m and its estimated weight is 55 tons. It is one of the largest known crystals in the world.

Floor of the cave is almost completely covered with these giant crystals but even more amazing are the selenite giants which protrude from the walls and ceiling and often reach the opposite side of the cavern. These giant, translucent crystals are not just formless lumps – they have kept the morphological perfectness.

In Naica Mines have been discovered four more caverns with amazing crystals and there are good chances that more will come.

Cave of the Swords was the first discovered cavern – specialists speculate that crystals in this cave are smaller because this cave is closer to the land surface and heated water cooled down faster than in the Cave of the Crystals.

There is also a possibility that entrances in further caverns hide behind the crystals in Cave of the Crystals but their research would require significant damage to the cave.

Natural groundwater level in this place is at the depth of 110 metres. Thus, to maintain activities at the depth of 850 m mining company has to pump the water away. Each minute there are pumped away 55,000 liters of water irrigating the desert around the Naica town. Thanks to this here have evolved agricultural lands over the last decades.

One day mining operations will end and groundwater pumps will be switched out. Cave of the Crystals will be filled with hot water again.

Now, as Cave of the Crystals is without water in it, crystals are rather quickly deteriorating. Their transparency is decreasing, there are forming fractures and crystals become fragile. Researchers are finding new and new pieces of fractured crystals on the floor of cave.

When water will be back in the cave, formation of crystals will start again. Our activities are just a short glimpse in the geological history of Cave of the Crystals.