The polio-like disease that sickened at least 233 US children last year, leaving many temporarily paralyzed, may make a return at the end of the summer, the Centers for Disease Control and Prevention (CDC) warned Tuesday.

Doctors must be on high alert for acute flaccid myelitis (AFM), the mysterious disease that rears its head every two years, typically between August and December, the agency warned.

Yet the CDC are concerned enough to release a study and advisory to urge parents, and especially physicians to take children’s limb weakness seriously and act fast. 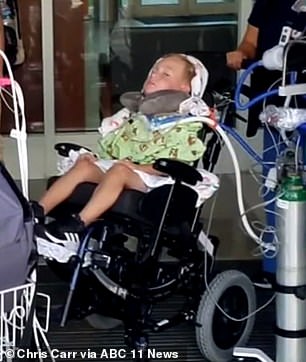 Brandon Noblitt (left), eight, got a cold earlier this year. Within a week, he was unable to walk due to AFM. Camdyn Carr (right) was in danger of being unable to breathe on his own after developing the mysterious, paralyzing disease CDC official are warning doctors to be watchful for the rare, mysterious disease ahead of the fall ‘AFM season’

Health officials don’t know what exactly causes AFM, or why it strikes some children and not others, but they have observed when it tends to strike.

AFM was first recognized in 2014, when 120 people, mostly children, across the nation were brought to hospitals with bewildering, sudden muscle weakness or paralysis in their limbs.

Although there were a handful of cases of the already rare disease the following year, AFM seemed to subside in 2015.

But it was back again in 2016, sickening even more people – 149 – than the first recognized outbreak had.

In total, 570 cases of the rare disease have been confirmed since it was first recognized in 2014.

Most people with AFM have accompanying symptoms of viral respiratory infections, such as congestion, coughing, runny nose and fever.

Testing samples from these patients has helped doctors begin to whittle away at the list of potential culprits.

Several kind of enteroviruses – which cause respiratory infections – have been  linked to AFM cases, but there’s not enough hard, consistent evidence to establish that these are the cause of the disease.

The first suspect was EV-D68, which was linked to 2012 AFM case that predated the CDC’s recognition of the disease.

About 90 percent of people what developed AFM had some sort of respiratory infection, but not all of them had EV-D86. They didn’t all even test positive for a known enterovirus.

After last year’s record-setting caseload, the CDC has intensified its investigation into the disease, but the cause remains a mystery.

Nonetheless, its ongoing research has prompted the agency’s stark warning to doctors.

According to its newly released report, most confirmed AFM patients’ limbs started to go limp within about four weeks of a respiratory infection and fever.

AFM is progressive, working its way toward the body’s core from the limbs. Some children were evn paralyzed so badly that they couldn’t breathe on their own and had to be put on respirators. 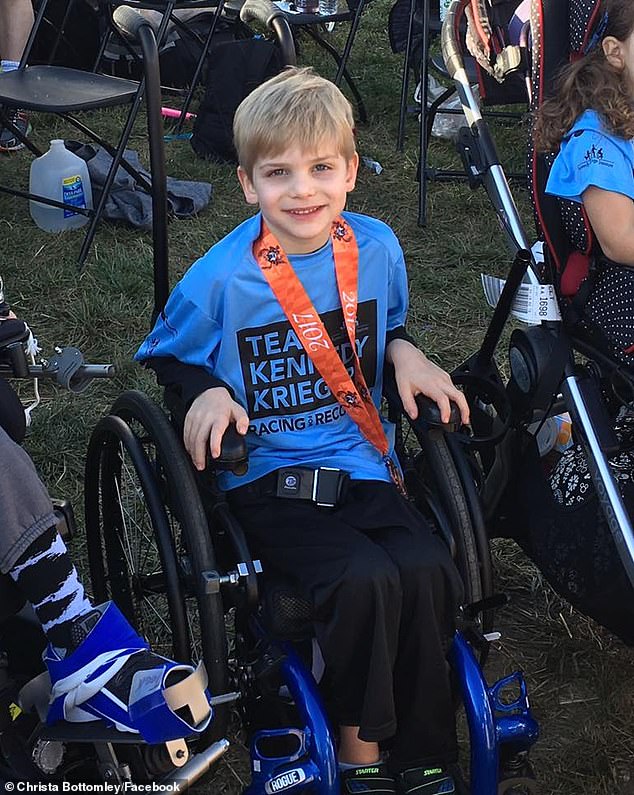 Sebastian Bottomley was just five when AFM struck him in 2016. The now-seven-year-old (pictured) has relied on a wheelchair to get around ever since

So, the CDC cautions, time is of the essence.

AFM is so rare that its symptoms are commonly missed, mistaken for something else or dismissed by doctors.

But now the CDC is urging ‘early recognition,’ and asking that doctors include AFM on their list of possible diagnoses when a child presents with limb weakness and recent respiratory illness.

Although sporadic cases are diagnosed year-round and even in the ‘off’ years, (so far) AFM invariably surges starting in August, and begins to ebb in December.

As the summer reaches its zenith, health officials are looking ahead to AFM ‘season,’ and pleading with doctors to take temporary paralysis seriously and immediately start treatment with immunoglobulins, steroids and physical therapy.

The CDC is also pleading that clinicians forward samples and information to its Atlanta, Georgia, headquarters so the researchers studying AFM there might have a shot at solving the disease’s mystery.