CDC warns not to eat romaine lettuce if source unknown

Today the CDC announced that the number of people sickened with E. coli from romaine lettuce has reached 84.

The agency advised consumers, restaurants and grocery stores to throw out any romaine if it might have come from Yuma, Arizona, or if they did not know the source.

Yet Americans continue to get sick with E. coli, and 70 percent of them are women who are more likely to opt for a salad at Pret A Manger than a burger from McDonald’s for lunch.

Restaurant chains have not been releasing public statements or posting signage about the romaine risk.

Some have, however, reacted to customer concerns on Twitter by insisting their greens are clean, leaving many patrons confused about how safe their salads are.

Pret A Manger is still serving its Veggie Fiesta salad, and insists that the romaine lettuce in it is from California and free of the E. coli that has sickened 84 people in the US

The Centers for Disease Control and Prevention (CDC) staff has narrowed the outbreak of E. coli to farms in Arizona – but there is no telling where the lettuce goes from there.

E. coli has an open opportunity to grow rampant on lettuces as they are transported across the country in plastic packaging the incubates the bacteria.

The CDC’s advice to make sure your lettuce is not from Yuma was treated as difficult to follow by the Consumer Reports, whose director of food policy initiatives, Jeff Halloran said: ‘It is not realistic to expect consumers to ask restaurant servers where the lettuce in that Caesar salad comes from, nor is it likely that they would know.’

What’s more, it would not be in restaurants’ best interests to openly advertise that some of their menu items even could be unsafe.

Restaurant owners have evidence for how transparency could quickly turn against them.

In 2015, 55 cases of E. coli infections were traced back to Mexican lunch hot spot Chipotle.

That number grew to nearly 500, and Chipotle scrambled to apologize for the contamination .

Last month – two years after the restaurant’s bacterial disaster – 26 percent of Americans still said that they were concerned about the safety of Chipotle food.

And now the restaurant may be in hot water again, as romaine is the Denver-based chain’s lettuce of choice.

Its website boasts that Chipotle serves ‘food with integrity,’ sourced from ‘farms not factories,’ but gives no indication of where those farms might be.

Where its CEO was quite vocal after the 2015 E. coli debacle, Chipotle has not published a press release about the latest outbreak and whether or not its romaine was contaminated.

One representative for Chipotle, named Jenn, tweeted that the chain’s food was not at risk because the warning only pertained to pre-chopped salads (which is no longer the case).

Another, called Gabe, wrote: ‘Again, neither Chipotle nor any of our suppliers have been contacted regarding any links to the issues specifically related to romaine lettuce.’

Daily Mail Online reached out for comment but Chipotle had not responded at the time of publication. 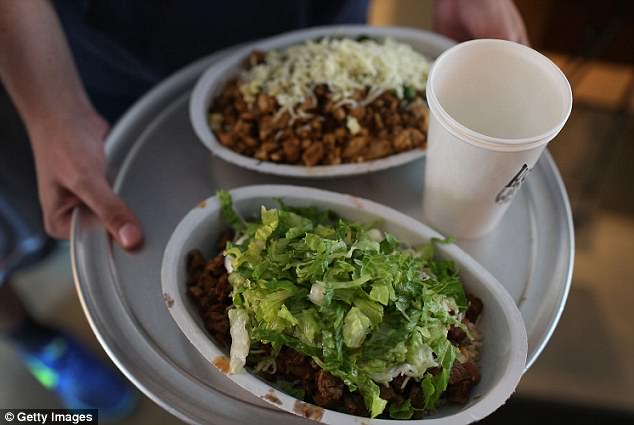 After Chipotle’s 2015 E. coli debacle, 26 percent of people still say that they have concerns over the safety of its food – including the romaine it uses in all of its burritos, bowls and tacos

They are in good company in their silence.

Pret A Manger has been a bounding up the ranks among lunch restaurants, where customers in a hurry can grab a healthy bit to eat on the go.

Pret’s website last published a press release in October 2017, and its site makes no mention of romaine.

But, the restaurant did respond to New York Times reporter Julie Bosman’s tweet – ‘Definitely not worried about that @Pret chicken Caesar I ate for lunch, nope’ – saying: ‘Hi Julie, just to clarify romaine comes from California.’

No one from the restaurant chain’s media department responded to Daily Mail Online’s requests for comment, however.

As a woman, Bosman is particularly at risk for getting E. coli from eating salads.

Men are significantly more likely to choose to eat red meat or sunnyside egg, putting them at risk for some salmonella.

But women eat more fruits and vegetables, including the leafy greens like romaine lettuce.

‘My male friends don’t eat enough leafy greens, but my female friends and my daughters eat leafy greens, so it is not surprising that 70 percent of the people getting sick are women and girls,’ Jaydee Hansen, a senior policy analyst at the Center for Food Safety told Daily Mail Online in a previous interview.

‘They’re following their doctor’s advice,’ he added, but quickly amended that, encouraging women in particular to be very careful about picking up salads for lunch, especially at places like Pret, where the lettuce is not entirely clear.