Bacterial and fungal infections that are resistant to standard medicine spike during the COVID-19 pandemic, the CDC revealed Tuesday.

The Centers for Disease Control and Prevention (CDC) unveiled a Special Report of it U.S. Impact of Antimicrobial Resistance sharing the shocking uptick in infections and deaths caused by these disease during the pandemic.

Overall, there was around a 15 percent jump in both infections and deaths from the infections overall during the first year of the pandemic, though the figure could be even higher as some of the data remains incomplete.

For some specific infections – those described as growing at an ‘alarming’ rate in the report – the year-over-year growth was as high as 60 percent.

The sharp increases of some bacterial and fungal infections is extremely worrying for health officials who had been recording sharp declines of these disease over the second half of the 2010s.

Detected cases of Carbapenem-resistant Acinetobacter jumped by 35% from 2019 to 2020, including a 78% increase in cases contracted at a hospital

The largest growth was among C. Auris, for which cases in America increased by 60% from 2019 to 2020. Indian experts warned earlier this year that anti-fungal treatments being used on commercial fruit farms could supercharge C. Auris infections

‘This setback can and must be temporary. The COVID-19 pandemic has unmistakably shown us that antimicrobial resistance will not stop if we let down our guard; there is no time to waste,’ said Michael Craig, director of CDC’s Antibiotic Resistance Coordination & Strategy Unit, said in a statement.

‘The best way to avert a pandemic caused by an antimicrobial-resistant pathogen is to identify gaps and invest in prevention to keep our nation safe.’

Growth of eight different antibiotic resistances was described by CDC officials as ‘alarming.’

One of the fastest growers Carbapenem-resistant Acinetobacter, for which cases jumped by 35 percent from 2019 to 2020.

It can cause pneumonia, blood stream, urinary tract and wound infections, the agency reports in a notice on the disease. 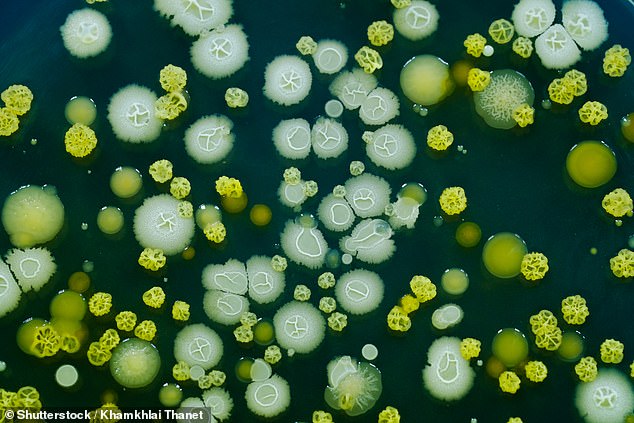 Overuse of antibiotics has allowed for many bacterial and fungal infections that have resistance to the drugs to form. The WHO warns it is one of the world’s largest public health threats (file photo)

Scarily, the infection is often spread at the hospital itself as the bacteria can contaminate surfaces and medical equipment.

‘Acinetobacter is a challenging threat to hospitalized patients because it frequently contaminates healthcare facility surfaces and shared medical equipment,’ the CDC writes.

Combining an antibiotic with the compound that gives vanilla its rich taste may stop the spread of drug-resistant superbugs, research suggested in July 2018.

Mixing the drug spectinomycin with vanillin increases the antibiotic’s ability to enter bacterial cells and prevent their growth, a German study found.

Spectinomycin was initially used in the 1960s to treat gonorrhoea until the STI developed resistance to it.

Experts have previously warned antibiotic resistance poses ‘as big a risk as terrorism’.

A lack of new drugs combined with overprescribing is thought to have driven the resistance crisis, which, according to the World Health Organization, ‘has the potential to affect anyone, of any age, in any country.’

A selection of these combinations were then tested in multi-drug resistant bacteria taken from infected hospital patients.

‘If not addressed through infection control measures, including rigorous cleaning and disinfection, outbreaks in hospitals and nursing homes can occur.’

The CDC report finds that hospital-induced cases of the infection increased by 80 percent over that period.

Treatments for the infection are relatively limited as well as the germs that cause it can not be killed with the standard antibiotics.

Another fast grower was cases of Candida Auris – or C. Auris as it is often referred to – which jumped 60 percent year-over-year.

Earlier this year experts in India warned that cases of the yeast pathogen were being super charged by the overuse of anti-fungal treatment on fruits and vegetables.

The fungal infection, like many other drug resistant infections, can also spread through long-term healthcare facilities.

‘A key finding was that C. Auris spreads mostly in long-term healthcare facilities among patients with severe medical problem,’ the CDC writes.

Transmission via healthcare settings has become a deep concern for health officials.

The CDC reports that around 40 percent of the nearly 30,000 deaths from these infections in 2020 likely began in a hospital setting.

Officials point to two potential causes for this surge in infections. First, many people were less likely to seek medical help when they were sick with a non-Covid illness – fearing they would catch the virus at a medical facility.

The longer a person is infected with the virus the more likely it is to mutate and potentially pick up traits that are even stronger against available drugs.

There was also a sharp overuse of antibiotics during the COVID-19 pandemic. While the drugs have no antiviral properties they did help relieve symptoms in the most severe cases of the virus.

Over and unnecessary use of antibiotics is believed to be the primary reason these diseases have become entrenched around the world, as they push bacteria into evolving in ways that current medicine can not treat.

The World Health Organization even warns ‘antibiotic resistance is one of the biggest threats to global health, food security, and development today.’

Overuse of the drugs surged in the 2000s and continued into the 2010s. While officials have worked to limit prescriptions of the drugs to only when they are absolutely needed, some fear that enough is not being done to prevent a surge of drug-resistant bacterial and fungal infections.