Cathy Ellott (pictured), pastoral deputy of St Mary’s Ascot, said it is important to continue to discuss relationships between men and women because this is the ‘majority experience’

A deputy head at a top girls’ school has warned of the ‘real danger’ of heterosexuality being ignored in favour of lessons on gay and transgender issues.

Cathy Ellott, pastoral deputy of St Mary’s Ascot, said it is important to continue to discuss relationships between men and women because this is the ‘majority experience’.

She added that such partnerships should be ‘learned about and celebrated’ in schools so that children are prepared for adult life.

She also said her all-girls Catholic boarding school in Berkshire is rejecting a wider trend of using gender-neutral language.

Many institutions have chosen to simply refer to pupils as ‘students’ so that transgender youngsters do not feel alienated, but Mrs Ellott said St Mary’s would continue to identify itself as ‘a school for girls’.

Her comments, made in an interview with the Independent School Parent magazine, come after the Government introduced compulsory relationships classes for children of all ages. The lessons must include material about same-sex relationships and transgender issues to comply with the Equality Act.

A number of schools are already teaching children as young as five about gay relationships and gender dysphoria. Mrs Ellott said that while pupils at St Mary’s were taught about LGBT issues, such issues are not the focus of relationships lessons.

She warned there was a ‘real danger’ that too much emphasis on alternative lifestyles could sow confusion in youngsters.

She added: ‘There is a danger that the other sexualities are discussed, and heterosexuality – which is the majority experience – is ignored rather than learned about and celebrated.’ At St Mary’s, girls discuss transgender issues as part of its PSHE (personal, social, health and economic) studies, and relationship and sex education, ‘within the context of its Catholic ethos’.

Mrs Ellott said: ‘This means that, although the girls are educated about transgender issues, they are encouraged to develop their own response to these issues, guided by their faith.’

While some schools have stopped using the words ‘boys’ and ‘girls’ so that transgender pupils feel included, St Mary’s is taking a more traditional approach, she said, adding: ‘We would not enforce this in our school as we identify ourselves as a school for girls. 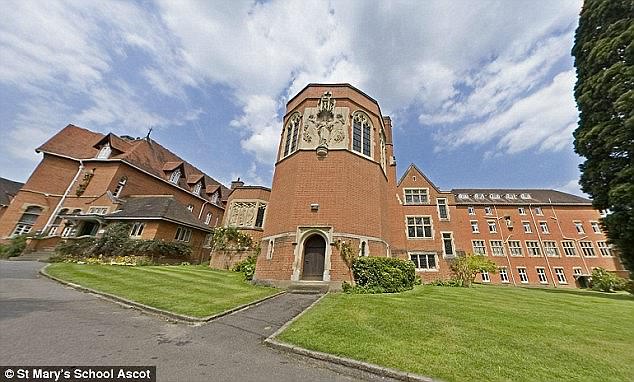 She added that such partnerships should be ‘learned about and celebrated’ in schools so that children are prepared for adult life. Pictured: St Mary’s School Ascot

‘We use “pupils” in formal situations and documentation, and often use “girls” when addressing the girls. The girls themselves have said that they prefer this.’

She did not reveal whether the school has any transgender pupils, but said that if a girl wished to transition each case would be treated on an individual basis.

‘We would work very closely with the girl, her parents and where necessary other health professionals to consider what is best for the girl within a girls’ full-boarding school environment,’ she said.

Mrs Ellott also voiced concerns that some children are facing medical intervention if they question their gender at a young age.

Figures have shown child referrals to the NHS Gender Identity Development Service have soared over the last six years. Children can be given hormones to block puberty, which will make transitioning easier after the age of 16.

Mrs Ellott said: ‘If children suffering from gender dysphoria require medical support to flourish, then I am pleased that these services are available. However, I have serious concerns about medical intervention in children as part of a transitioning process.’