And Australian celebrity chef Curtis Stone has revealed the secret to making the perfect bolognese sauce every time.

Here, the ambassador of Coles supermarket giant shared his surprisingly easy cooking method – and the one simple trick that brings the classic dish together. 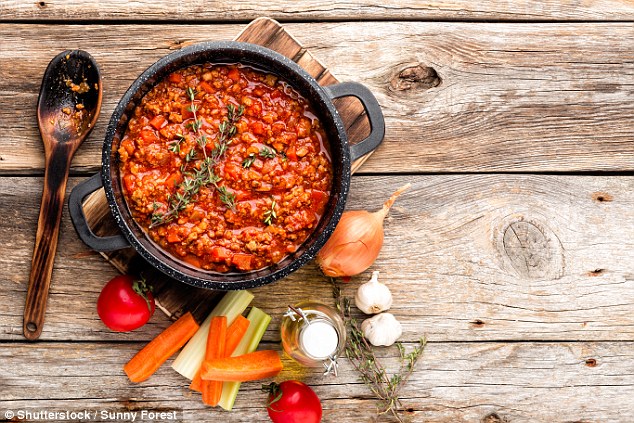 In a step-by-step video via Coles YouTube channel, Curtis revealed his tip to maximum flavour in the sauce.

He explained how home chefs need to ‘establish’ what’s called a ‘fond’ – a French culinary term for creating a caramelised base.

‘The fond is the colour you see at the bottom of the pan. Some people get stressed out about it and try and scrap it off. But don’t worry, it’s a good thing,’ he said.

‘What you want to do is start with your vegetables. Don’t cook [meat and vegetables] all at once. Cook the veggies, get them out and get the meat in to create the fond.’

And to get the fond, Curtis said it starts by picking the right pan to cook with.

‘To get this fond, you need to use either a cast iron pan or stainless steel,’ he said.

‘Don’t use non-stick because the non-stick is going to stop that flavour from sticking to the bottom of the pan.’ 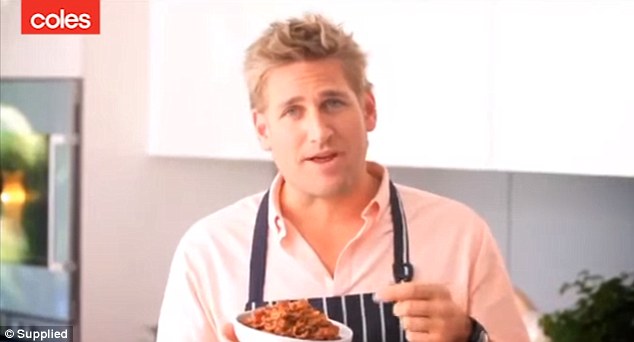 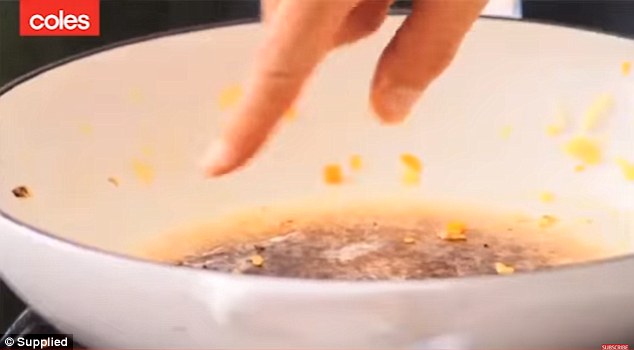 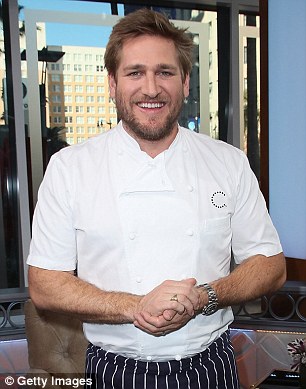 To get the fond, Curtis said it starts by picking the right pan to cook with

Curtis starts by drizzling oil into the hot pan before sauteing chopped onion.

‘Hear that sizzle. Then you move [onions] around and you’re going to see a little bit of colour start to develop at the bottom of the pan – that’s your fond,’ he said.

‘Then add a little bit of garlic. Make sure you give your onion a head start because they take a little longer to cook.’

Next add the chopped vegetables. Curtis said this is a personal preference – carrots, zucchinis, celery or fennel.

‘We’re going to cook the vegetables for another minute, take them out and reintroduce them to the bolognese later on,’ he said.

‘Place your pan back on the heat, and you can already see the colour develop at the bottom of the pan – now that is flavour – it’s a great thing.

‘We’re going to add our meat [to the pan] and continue to develop that flavour.’ 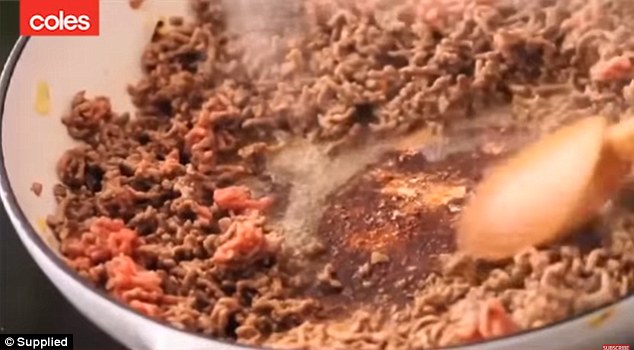 Curtis said once the fond has been established, add the red wine or white wine so the liquid lifts off the caramelised flavour from the bottom of the pan

Add a bit more oil to the hot pan, before the mince meat.

‘So another trick when it comes to actually getting the colour on the mince meat, is you have to have the pan really hot,’ he said.

‘The reason? When you put the cold meat into a hot pan, what happens? The cold meat makes the pan cooler. So you need to have it hotter than you imagine you need it to in order to establish this fond.

‘The fond almost looks like it’s burnt and a lot of people would think “I’ve done the wrong thing here, I burnt my sauce”. But that’s not the case.’

‘What we’re going to do is lift all that off by using a liquid. You can use red wine or white wine, you can even use a bit of balsamic vinegar. You’re going to get all that flavour off the bottom of the pan and into the dish you’re making.’

Pour the red wine into the pan as the meat continues to cook.

‘All of that colour and flavour is going to lift up off the pan, and that is how you end up with this beautiful bolognese sauce,’ Curtis added.

‘Give it a good old scrap, reduce in some of the liquid that you just poured in. The fond is the flavour and colour of the sauce.

‘Once you reduce that liquid back down, then you can re-add your vegetables, seasoning and tomatoes – you’re going to end up with the most unbelievable bolognese.’