Glyndebourne’s Cendrillon is a real curate’s egg, with the singing good in almost every part… but the direction good in very few parts

This Cendrillon is a real curate’s egg. The singing is good in almost every part; Fiona Shaw’s erratic, dogmatic, right-on direction is good in very few parts.

Massenet’s opera is rarely heard, and there are valid reasons for its neglect. He couldn’t decide whether it was a fairy tale or something with pretensions to be a second Tristan And Isolde.

The fairytale bits are enjoyable, with some highly accomplished music, though no killer tunes. But midway through it’s all change: two formidable duets between Prince Charming and Cinderella take on a Wagner-like intensity (Massenet was a huge admirer of Wagner), frankly beyond Massenet’s capabilities to bring off. 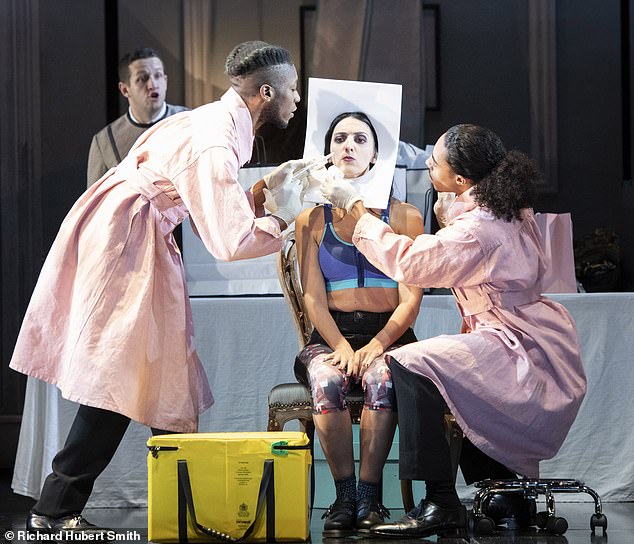 One of Cendrillon’s stepsisters, Noémie (Eduarda Melo), has a makeover in preparation for the ball. Sadly, the ugly sisters fail to display any particular comic gifts

The basic story is, of course, very familiar; the opera not at all. So a director content to lay the drama out without irritating concepts would have been good. But that’s not Fiona Shaw’s way.

What we get is heavy-handed symbolism: a wretched butterfly turns up everywhere; there are annoying additional characters, like a child Cinderella darting around, ruining some of Massenet’s better orchestral interludes; and worst of all, Prince Charming and Cinderella ultimately emerging as a lesbian couple.

I suppose Massenet asked for this, making both of them mezzos. But a Prince Charming (who is anything but) turning into a woman halfway through is a bridge too far for me.

A shame, because most of the singing really is rather good. The Fairy is brilliantly sung by Caroline Wettergreen, an excellent coloratura soprano of whom much more will be heard.

The veteran William Dazeley is excellent as Cinderella’s super-wuss dad, but the wicked stepmother and ugly sisters fail to display any particular comic gifts. In the pit, Duncan Ward directs with real flair.

So if the tour comes anywhere near you, this is well worth seeing. But whether Middle Britain will take to Ms Shaw’s outlook on life is very debatable.

This Cendrillon comes to the main festival next summer, with major cast changes. And, one hopes, with some changes from Ms Shaw as well.