Members of the human caravan that has traveled through Mexico to the American border have started climbing the 18-foot high fence that separates the two countries as they prepare to turn themselves over to US authorities to seek asylum.

More than a dozen asylum seekers climbed the fence separating San Diego and Tijuana under the watchful eyes of US Border Patrol agents on Sunday as people rallied on both sides.

Hundreds of Central American migrants arrived at the US border on Sunday packed into five old school buses to rally before a planned mass attempt to apply for asylum in America.

The migrants, many traveling with children, left a downtown Tijuana shelter earlier on Sunday where they had been staying. 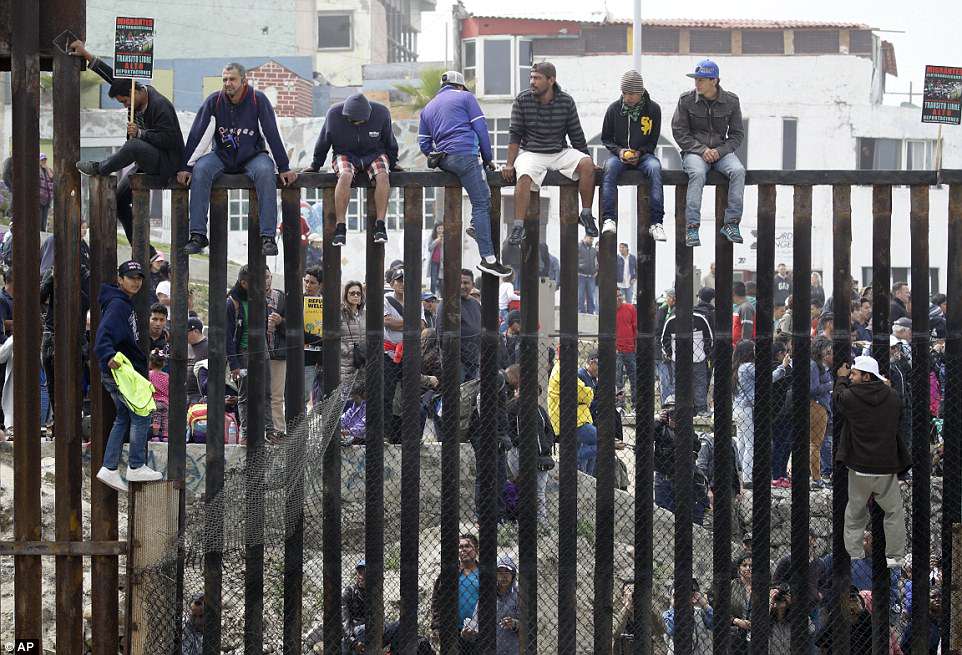 Police with flashing lights escorted the buses to a cross-border rally at a Pacific Ocean beach, with supporters gathering on both sides of security fencing brandishing signs

About 50 supporters watched on the US side where they were held about 20 yards away.

Asked how he felt as he boarded the bus, Nefi Hernandez of Honduras replied, ‘Nervous.’ He said he intended to seek asylum with his wife and infant daughter, who was born on the journey through Mexico.

President Donald Trump and members of his Cabinet have been tracking the caravan of migrants, calling it a threat to the US since it started March 25 in the Mexican city of Tapachula, near the Guatemala border.

Attorney General Jeff Sessions called the caravan ‘a deliberate attempt to undermine our laws and overwhelm our system,’ pledging to send more immigration judges to the border to resolve cases if needed.

Trump administration officials have railed against what they call ‘catch-and-release’ policies that allow people requesting asylum to be released from custody into the US while their claims make their way through the courts in a process that can last a year. 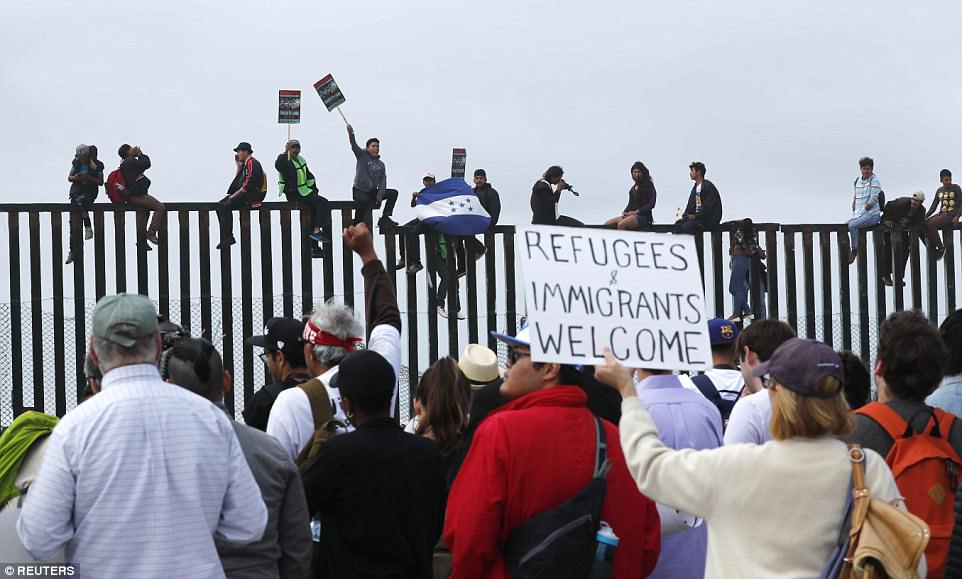 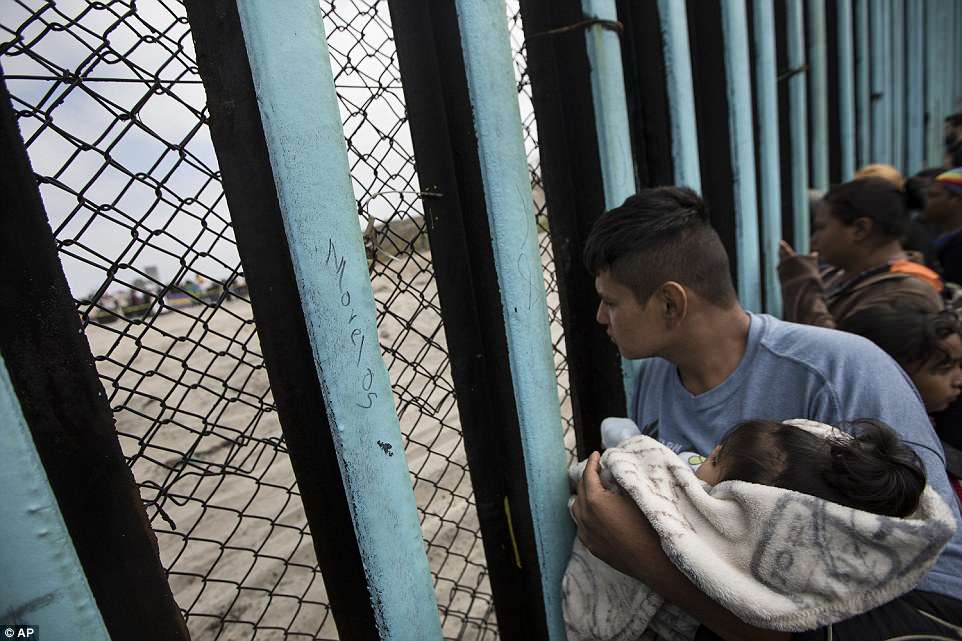 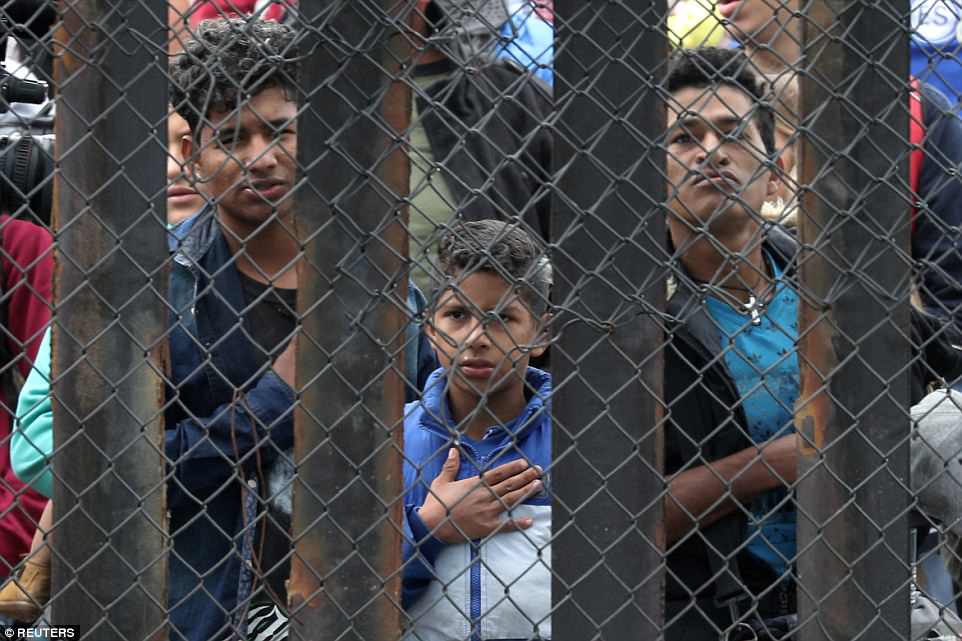 The migrants, many traveling with children, left a downtown Tijuana shelter earlier on Sunday where they had been staying 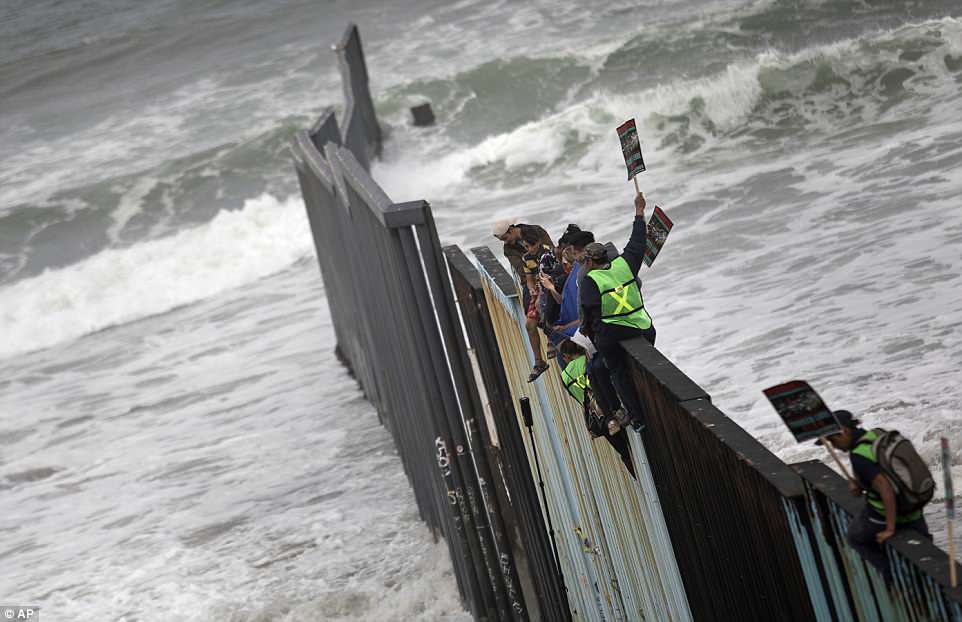 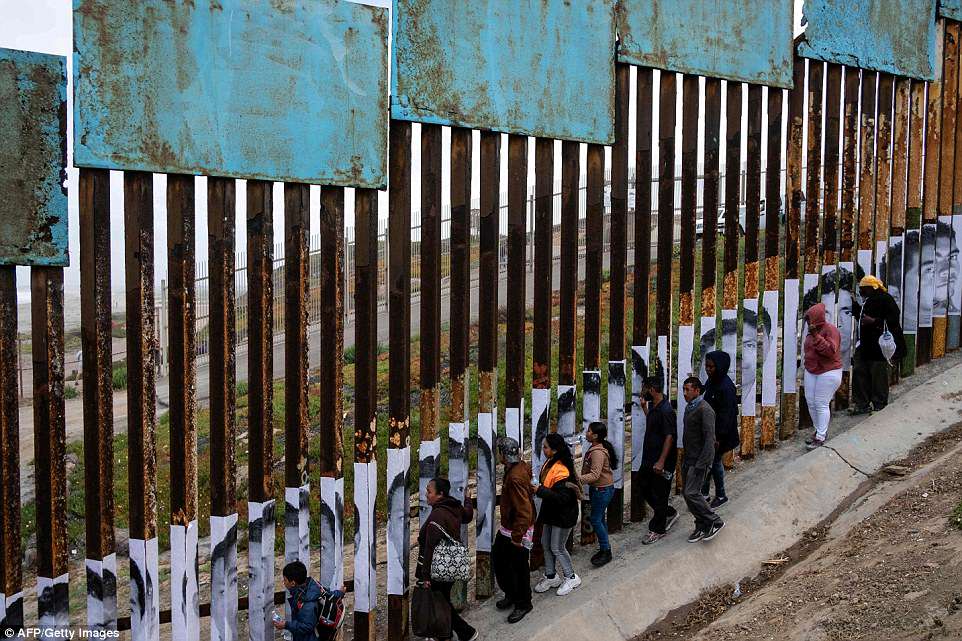 The arrival at San Diego’s San Ysidro border crossing, the nation’s busiest, marked the end of a month-long journey by foot, freight train and bus for the migrants – many of whom said they feared for their safety in their homes.

Hernandez, 24, said a gang in his hometown of San Pedro Sula, Honduras, threatened to kill him and his family if he did not sell drugs.

Jose Cazares, 31, said he faced death threats in the Honduran city of Yoro because a gang member suspected of killing the mother of his children learned one of his Cazares’ sons reported the crime to police.

But the travelers faced an uncertain future as they prepared to turn themselves in and face asylum.

US immigration lawyers conducted free legal workshops for the group, warning them they face possible separation from their children and detention for many months.

Homeland Security Secretary Kirstjen Nielsen said that asylum claims will be resolved ‘efficiently and expeditiously’ but that the asylum-seekers should seek it in the first safe country they reach, including Mexico. 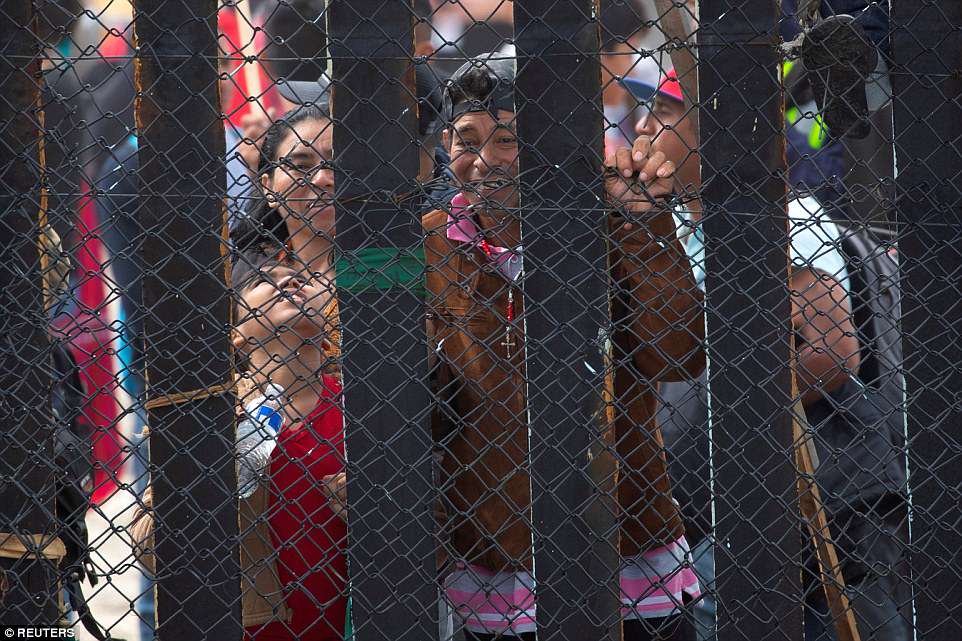 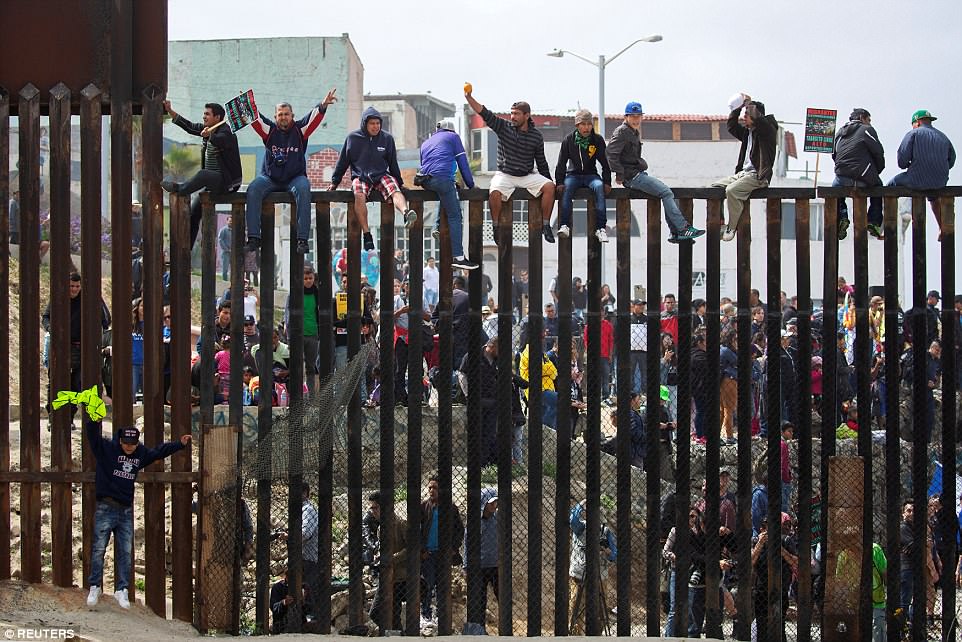 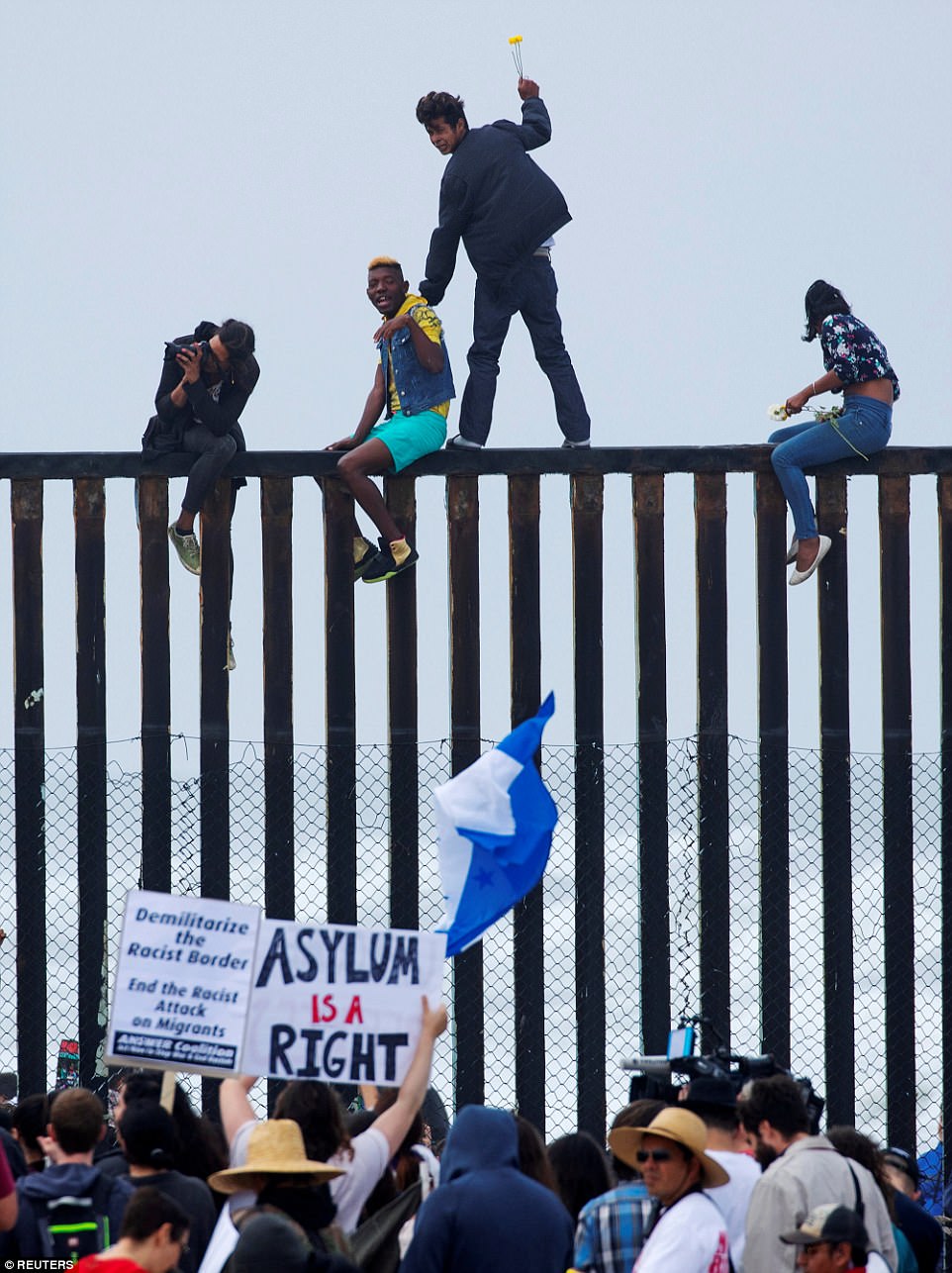 The arrival at San Diego’s San Ysidro border crossing, the nation’s busiest, marked the end of a month-long journey by foot, freight train and bus for the migrants 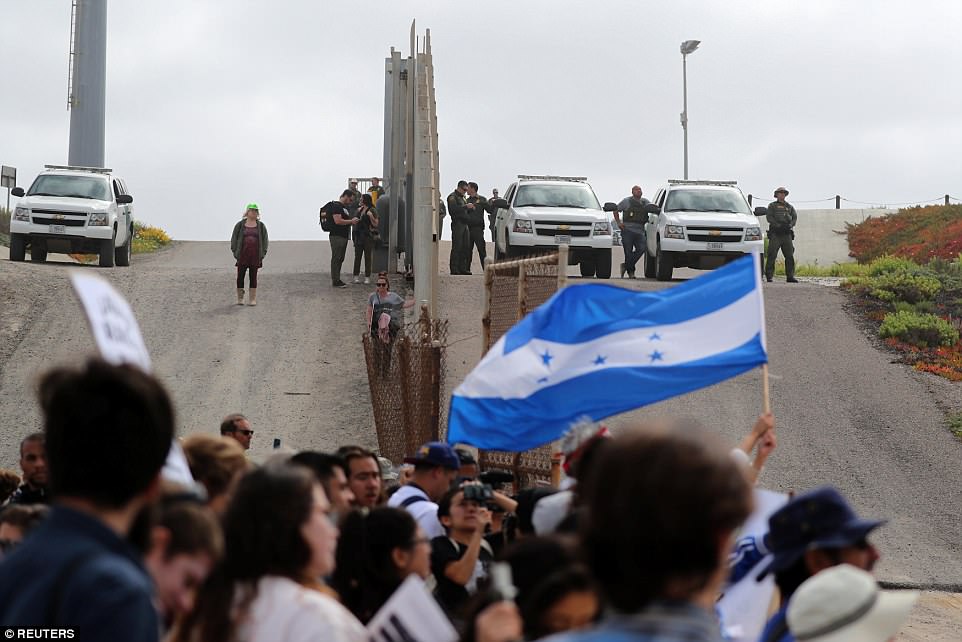 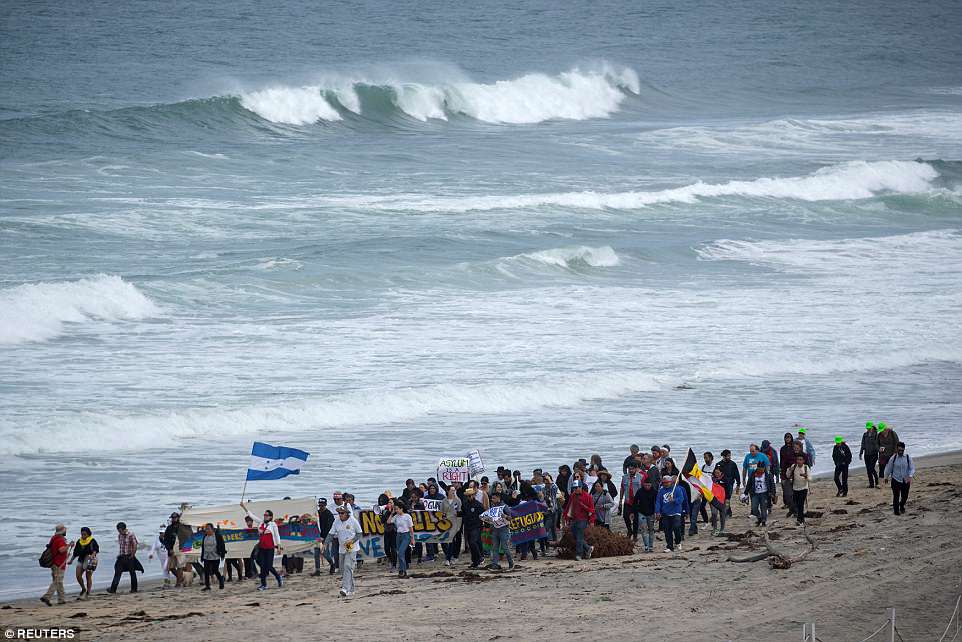 Administration officials and their allies claim that asylum fraud is growing and that many who seek it are coached on how to do so.

Asylum-seekers are typically held up to three days at the border and then turned over to US Immigration and Customs Enforcement. If they pass an asylum officer’s initial screening, they may be detained or released into the US with ankle monitors.

The San Ysidro crossing may be unable to take asylum-seekers if it faces too many at once, forcing people to wait in Mexico until it has more room, according to Pete Flores, US Customs and Border Protection’s San Diego field office director.

Flores said earlier this month that the port can hold about 300 people temporarily.

Maria de Los Angeles, 17, said she felt confident after speaking with an attorney that US authorities would release while her case wends its way through court because she was traveling alone with her one-year-old son.

She hoped to move in with a sister in San Francisco.

She said she fled her home in Jutiapa, Honduras, because the father of her son threatened to kill her and their child.

‘I’m fired up to go because I believe in God and I believe everything will work out,’ she said.