Hundreds of Central American migrants from a caravan through Mexico reunited in Tijuana on Wednesday and planned to cross into the United States together this weekend, in defiance of threats by President Donald Trump to repel them.

The timing could compromise a flurry of talks to renegotiate the North American Free Trade Agreement (NAFTA), which Trump has repeatedly threatened to scrap if Mexico does not crack down on the flow of Central Americans through its territory.

U.S. Secretary of Homeland Security Kirstjen Nielsen said her agency was monitoring the caravan and would prosecute anyone who illegally entered the United States or made ‘a false immigration claim.’

Hundreds of migrants from Guatemala, El Salvador and Honduras began arriving in Tijuana by bus on Wednesday, within sight of the US border 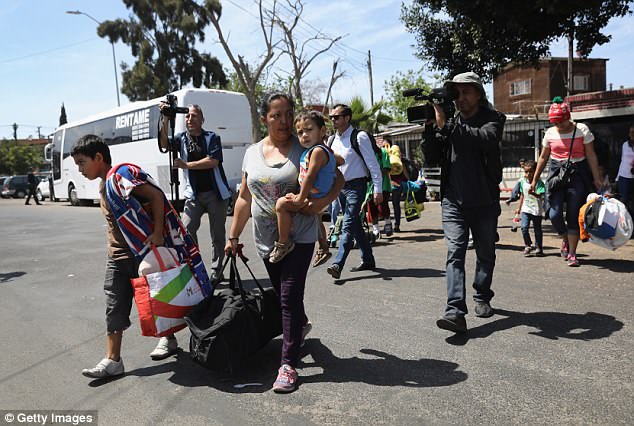 The migrants said they planned to cross the border into America this weekend, with one girl saying the wall ‘doesn’t look that high’ 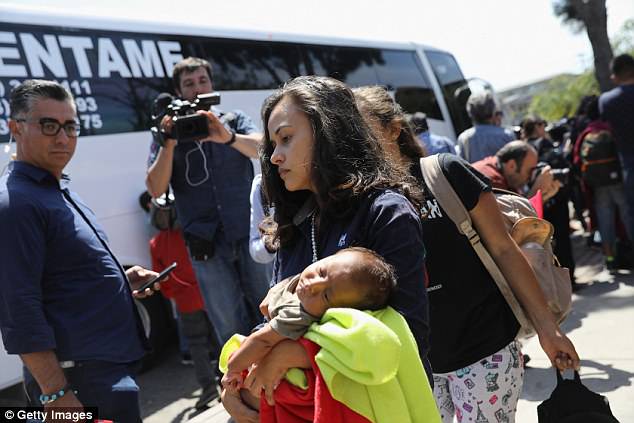 Donald Trump has repeatedly put pressure on Mexico to stop the caravan, while calling on congress to pass tougher border laws

Migrants began arriving by bus on Tuesday at a shelter that was a five minute-walk from the border and within sight of a U.S. flag fluttering under an overpass linking the two countries.

Minutes after disembarking, some sat outside the shelter with bowls of food, gazing over the road towards the United States.

‘The wall doesn’t look that tall,’ said Kimberly George, a 15-year-old girl from Honduras, nodding toward the stunted barrier only few feet away. ‘I really want to cross it.’

Migrants said they fled their homes in Guatemala, El Salvador and Honduras because of death threats from gangs, the murder of family members or political persecution.

Moving from town to town, the migrant caravan became a stumbling block for U.S.-Mexico relations after Trump unleashed a series of tweets in early April, pressuring Mexican authorities to stop them.

Another busload of migrants arrived in the afternoon, overflowing the first shelter and more pulled in after dark. Migrant aid groups said it was the biggest single group they had seen arrive together as they scrambled to find places in ten shelters. 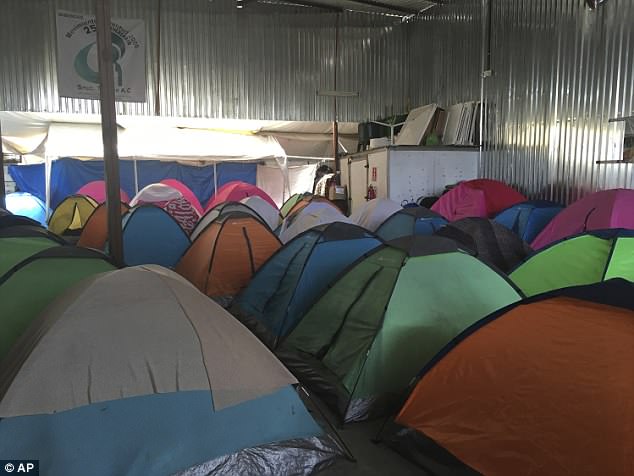 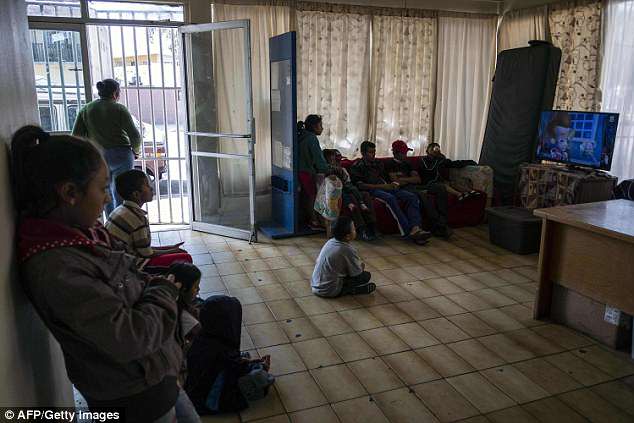 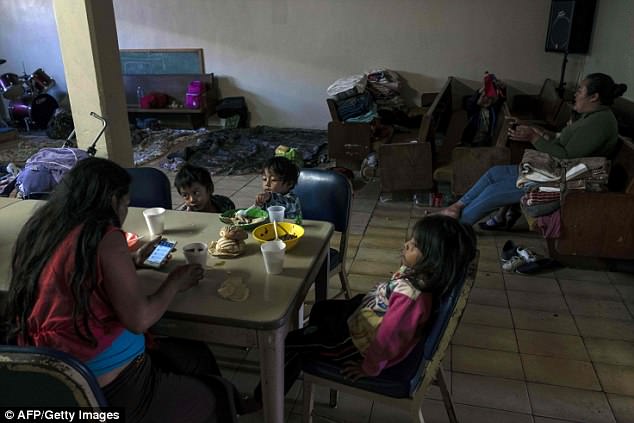 Families said they were fleeing gang violence and political persecution, or else were run out of their home countries after their families were killed

‘Thanks to God we’re here,’ said 34-year-old Aide Hernandez from Guatemala who had four children in tow. She said she planned to seek asylum in the United States. When asked why, she looked down, ashamed to detail a case of domestic abuse.

Honduran Angel Caceres dipped a tortilla into a plate of refried beans and rice, his first meal in two days. He preferred to spend what money he’d saved since leaving Honduras to buy food for his five-year-old son, Jeffrey, coughing with a dirty nose beside him.

Caceres said he fled Honduras in early March after a brother and niece were killed and his 82-year old mother was strangled to near death and raped.

‘I left with a heap of things in my head,’ he said and held out his phone with photos of a brutally beaten older woman in a hospital bed, repeating again and again: ’82. She’s 82.’

Volunteers from U.S.-based advocacy group Pueblos Sin Fronteras, which organized the caravan, addressed the migrants to discuss a plan to cross the main pedestrian bridge into the United States together on Sunday.

Tensions flared after a Mexican immigration official suggested they go in smaller groups to the border station before the migrants had a chance to meet later in the week with immigration lawyers organized by Pueblos Sin Fronteras. 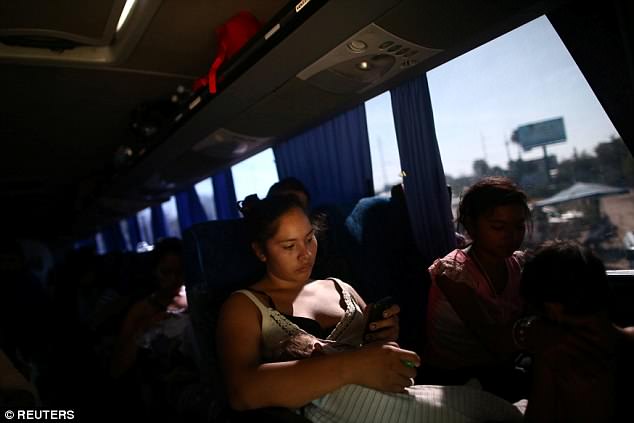 Migrants moving in a caravan through Mexico travel by bus from San Luis Rio Colorado, in Sonora state, to Tijuana, on the US border 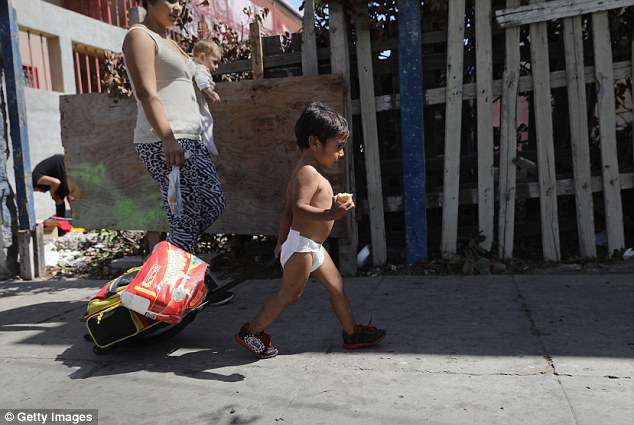 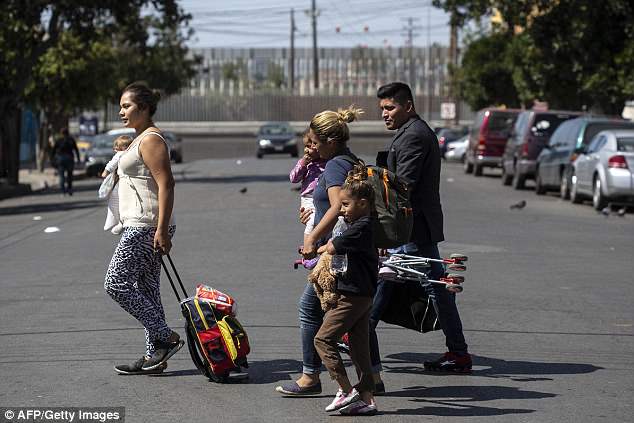 Videgaray told Nielsen that Mexico would make its own ‘sovereign’ decisions on immigration and that its cooperation with the United States was dictated by Mexican interests.

Nielson put out her message on the caravan later, making no mention of the talks with Videgaray.

‘Individuals of the ‘caravan’ seeking asylum or other similar claims should seek protections in the first safe country they enter, including Mexico,’ her statement said, while also stressing that people who ‘coach’ migrants to make false claims could be prosecuted.

‘The smugglers, traffickers and criminals understand our legal loopholes better than Congress and are effectively exploiting them to their advantage,’ she said.

Pueblos Sin Fronteras volunteers say they and other organizations are simply explaining to vulnerable people what rights they have, not coaching them to break the law.

Migrants who spoke at length with Reuters at various points during their month-long journey were short on polish and knowledge of their legal rights, but at least 20 recounted detailed stories of facing death threats. 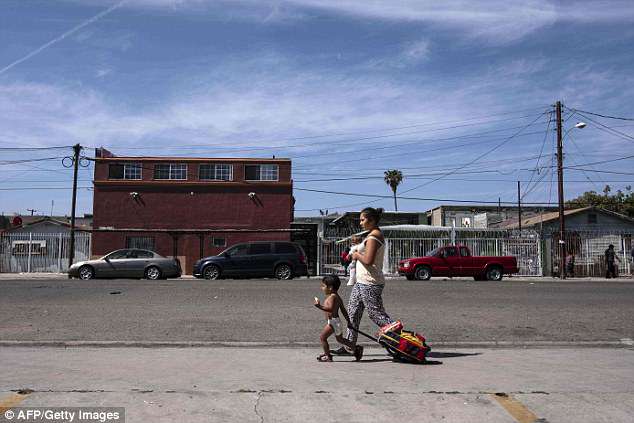 Many of the arriving migrants detailed cases of violence, either by partners or gangs, that had forced them to leave their home countries 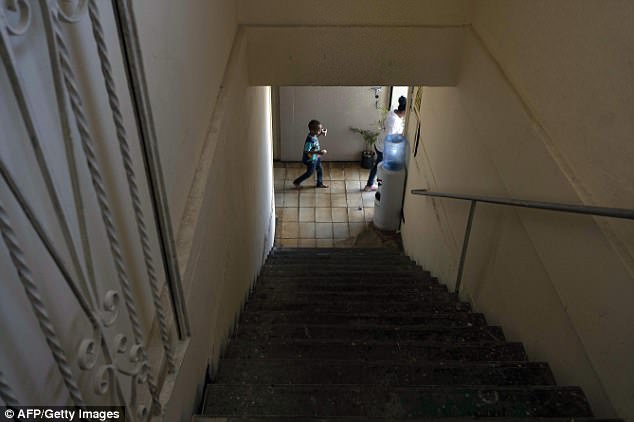 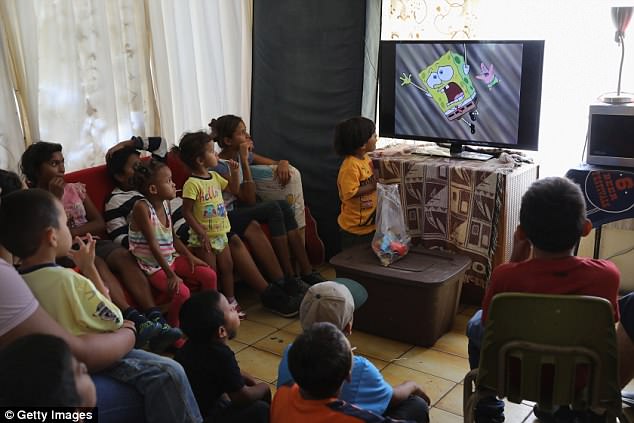 Children watch cartoons at an immigrant shelter in Tijuana, close to the American border

It was unclear if concerns about immigration could affect the talks to update the NAFTA accord, which were also talking place this week in the U.S. capital where ministers from Mexico, Canada and United States rushed to seal a quick deal.

On Monday, Trump threatened to make immigration controls a condition in the NAFTA talks and demanded that Mexico stop people from crossing its territory to enter the United States.

By late Wednesday back in Tijuana, children in dirt-smeared shirts played ball in a cramped courtyard in one of the shelters as others bedded down on the hard floor inside, covering up under blankets or whatever extra clothes they had on hand as the temperature dropped.

A scrawny girl crawled onto the lap of her mother, Ana Wuillams, crying that she was cold.

Wuillams had fled Honduras after being raped in a case so grave that an immigration attorney she met with for nearly an hour along the caravan route told her she had a 95 percent chance of a making a successful asylum claim in the United States.

But she was uncertain whether she and her daughter should stick with the group or try to cross the border alone and find their way to Houston where she had a friend ready to offer shelter.

‘Now that I’m here, I’m afraid to cross the border,’ she said.