Central Park’s land marked Belvedere Castle will re-open on June 28 after an extensive 15-month renovation project that cost $12million. The regal structure will be restored to its original splendor after it was left in shambles in the interim years since it was originally completed in 1869.

The whimsical granite castle was conceived by Central Park designers Frederick Olmstead and Calvert Vaux after their winning ‘Greenswald Plan’ won a design competition hosted by the City of New York in 1858. Their design was inspired by the open fields and natural landscape of the English countryside, it eschewed symmetry in favor of a more unspoiled look.

The imposing Gothic style structure was originally designed to be an observation deck that delivered sweeping views of the Great Lawn to the north and the fanciful woodlands of The Ramble to the south. The exact site was originally home to a fire tower owned by the Croton Aqueduct Company that supplied and distributed all the water throughout New York City. It was razed to make way for the castle which was constructed from schist and granite rock that was quarried in the park. Sitting on top of Central Park’s second-highest natural elevation, the castle’s name, ‘Belvedere’ is apt, as it means ‘beautiful view’ in Italian.

New York panorama from Central park with an aerial view Belvedere Castle among autumn trees. The 843-acre park is the third most visited tourist attraction in the world 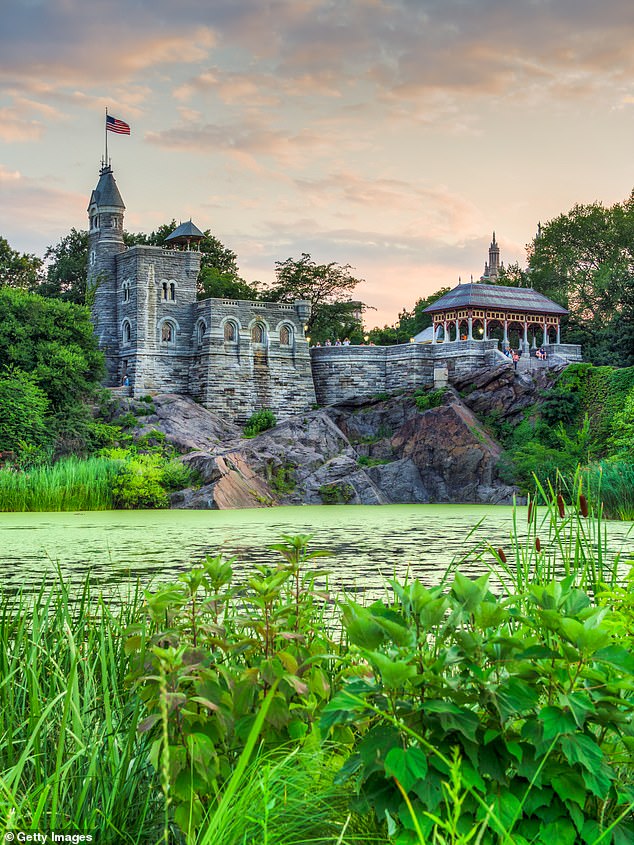 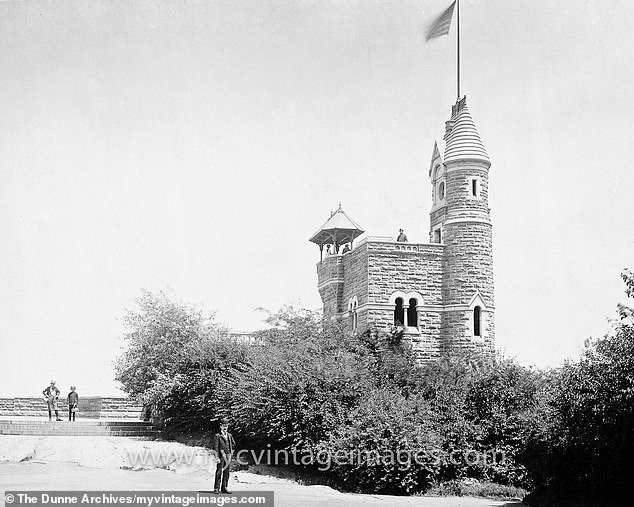 An undated early photo of Belvedere Castle in Central Park shows the original structure was built without windows much like Gothic European castles. Originally, a fire tower operated by the Croton Aqueduct company that distributed water throughout New York  City stood in the castle’s place 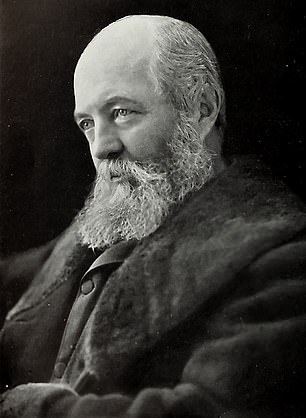 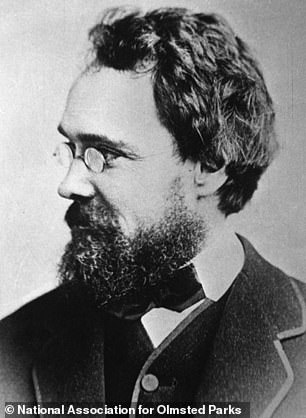 Frederick Law Olmstead  (left) and Calvert Vaux (right) are responsible for the natural design of Central Park and the construction of the Belevedere Castle after they won a contest hosted by the City of New York with their ‘Greenswald Plan.’ They were inspired by the unspoiled English country side that eschewed symmetry in favor of a more natural look

Wooden terraces and painted pavilions connected to the castle had long deteriorated and been removed before the building was turned into a weather station for the New York Meteorological Observatory in 1912. However, the Observatory eventually moved its offices to Rockefeller Center in the 1960s and the Castle was left to deteriorate for 20 years. During this time, it was ‘neither open or closed to the public, simply there for those who dared to enter,’ reported Gothamist.

Central Park is the third most visited tourist attraction in the world, but during the 1960s and 1970s, its infrastructure went through a rocky period. Like much of the park, Belvedere Castle was covered in graffiti, vandalized and in complete shambles when The Central Park Conservancy launched a restoration project in 1983. They converted the building into a visitor center and rebuilt the original turret, terraces and surrounding pavilions.

Four decades later, the fanciful building that sits on 79th Street’s latitude was in dire need of another face lift. The Conservancy updated critical elements of its framework and installed a new zero- emission heating and cooling system that was achieve by digging 400 feet into the schist rock.

Chris Nolan, the Conservancy’s chief landscape architect told AM NewYork, ‘This experience here is like being on the mountain top in the Adirondacks or the North Woods…It affords people a chance, with just a walk away from their apartment, to escape without getting on a train or spending the money to go anywhere else.’ 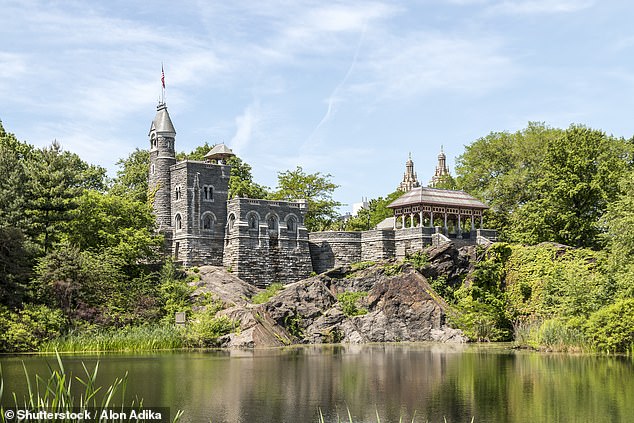 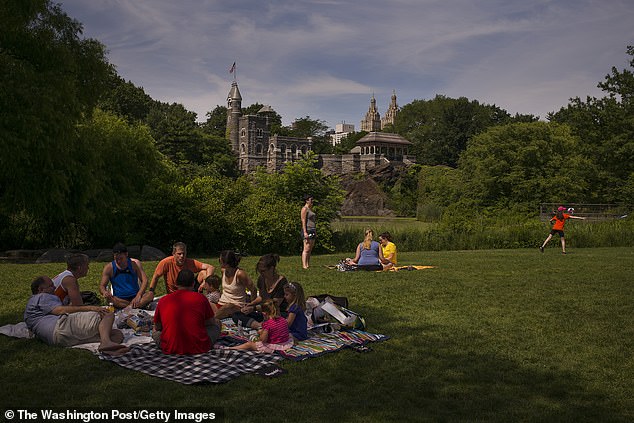 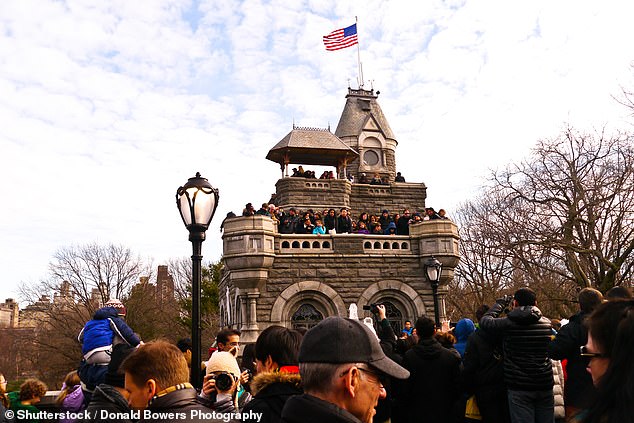 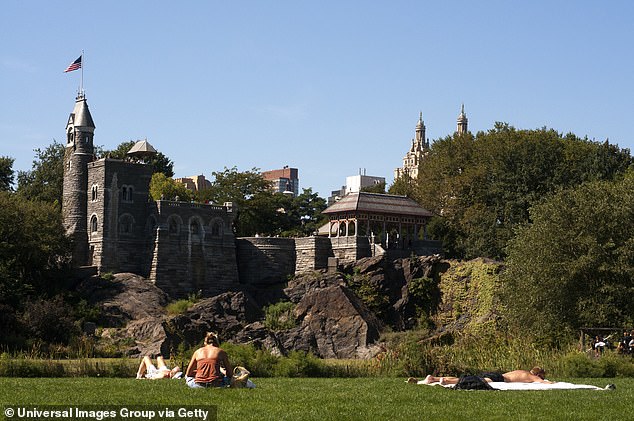 Chris Nolan, Central Park Conservancy’s chief landscape architect said, ‘This experience here is like being on the mountain top in the Adirondacks or the North Woods…It affords people a chance, with just a walk away from their apartment, to escape without getting on a train or spending the money to go anywhere else’ 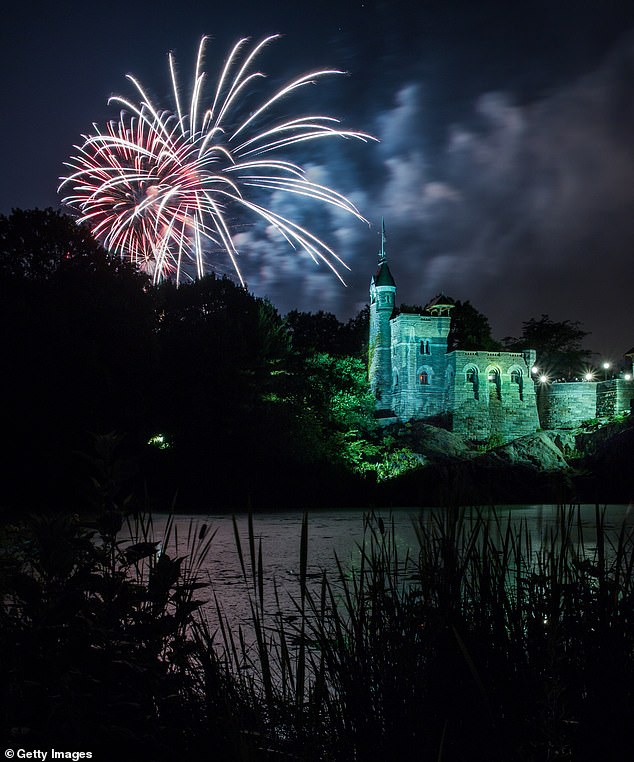 Central Park Conservancy’s chief landscape architect told AM NewYork that the new nightly light up feature, ‘..will be a magnificent nighttime venue for New Yorkers and all I can say to you is that you can light up midtown as much as you want, but nothing will compare to looking at the Belvedere at night’

A wide, expansive panorama of Central Park’s Turtle Pond shows the wooden pavilion that was re-built during the 1980s  in an effort to restore Belvedere Castle to its original plan 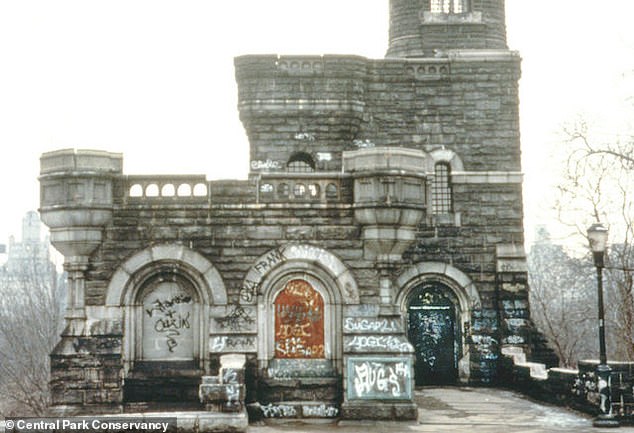 The castle deteriorated after the 60s when the New York Meteorological Observatory moved their offices to Rockefeller Center. Central Park’s infrastructure was close to bankruptcy and went through a rocky period; where vandals and graffiti artists took defaced the buildings 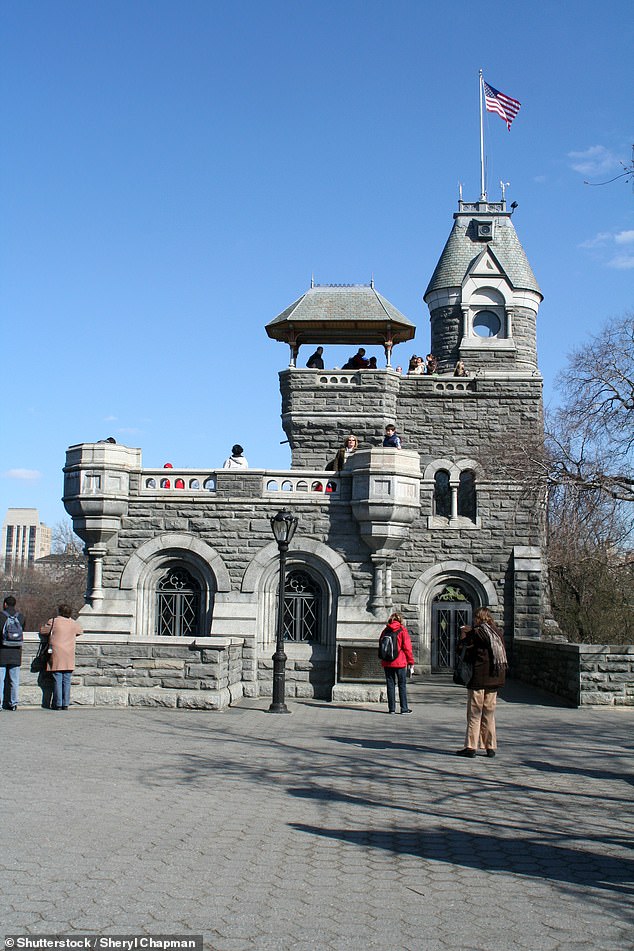 Since the 1980s, the Castle served as one of four visitor centers in Central park 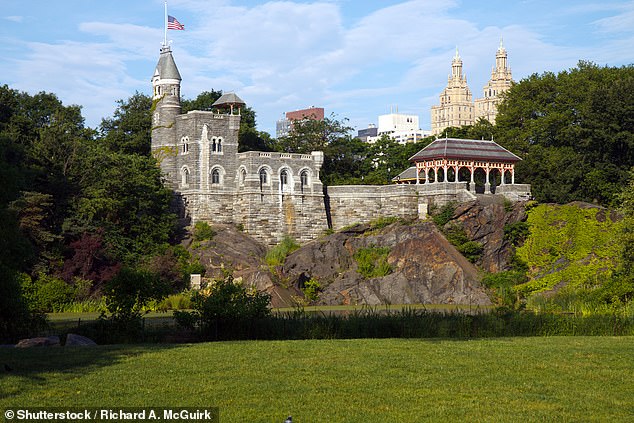 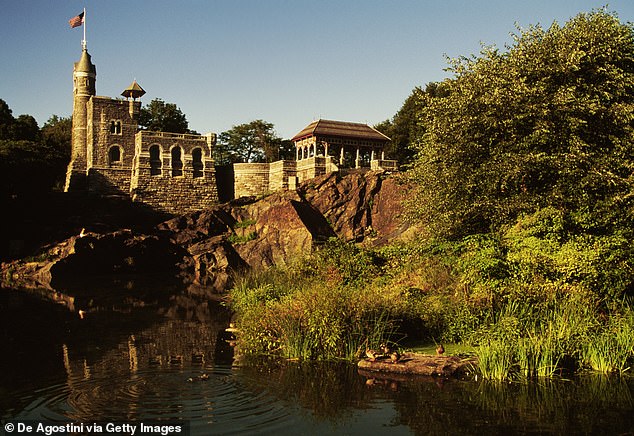 The castle is constructed from schist and granite rock that was quarried from the bedrock beneath the building. Five million cubic feet of soil and rocks had to be removed from the park during its construction and landscaping. More gunpowder was used in dynamite to clear the land than during the Civil War Battle of Gettysburg 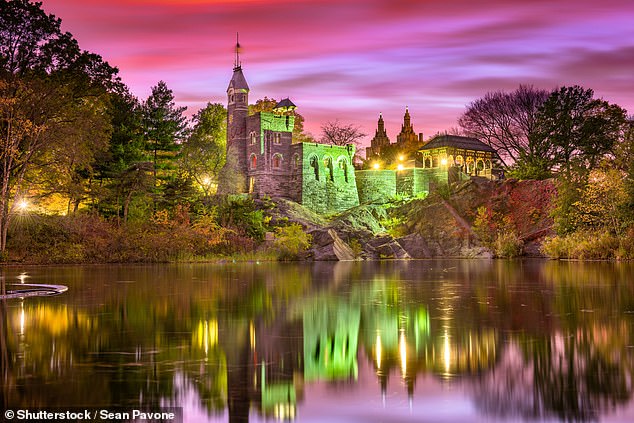 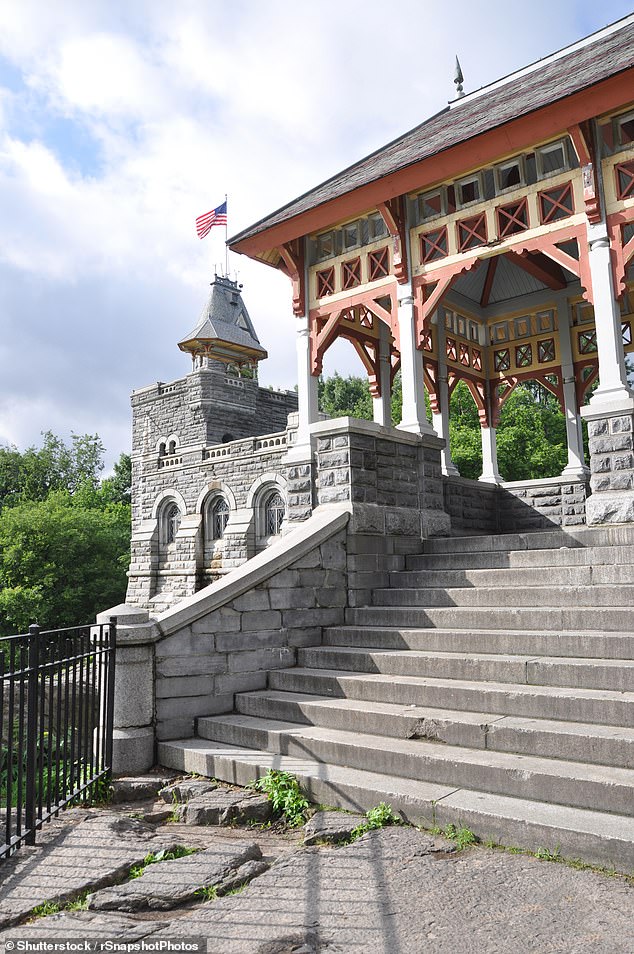 Canopy steps leading to Belvedere Castle observation deck which was used as a weather station between 1912 through the 1960s. It recently underwent a 15-month long renovation project that installed a new green- energy zero emission heating and cooling system