The central US is on high alert after warnings of severe flooding throughout the week follows a deadly tornado that flattened homes from the Upper Midwest to Appalachia.

The weather system, stretching from Texas to the Canadian Maritime provinces,  prompted several emergency declarations even before the storm arrived on Saturday. At least five people were killed.

Residents spread across Kentucky, Nashville, Missouri and Arkansas are cleaning up debris from the strong gale winds but now fears of flooding are on the rise, with more rainfall and runoffs expected all week.

Pictured, Oldham County neighborhood in Kentucky is surrounded by the flood waters of the Ohio River after a severe tornado touched down in the area 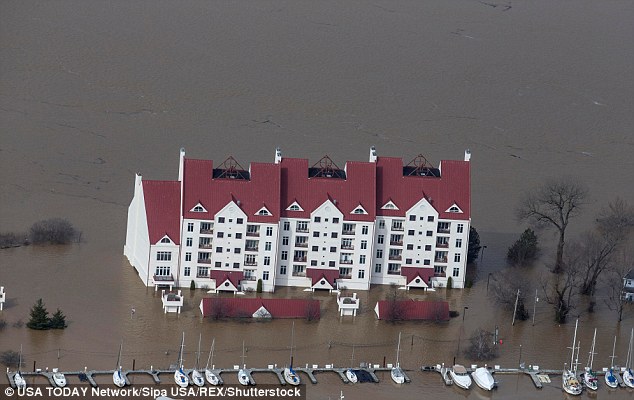 Pictured, a condominium is surrounded by flooded waters. The Ohio River is expected to crest at 60.7 feet by Sunday evening, according to the National Weather Service 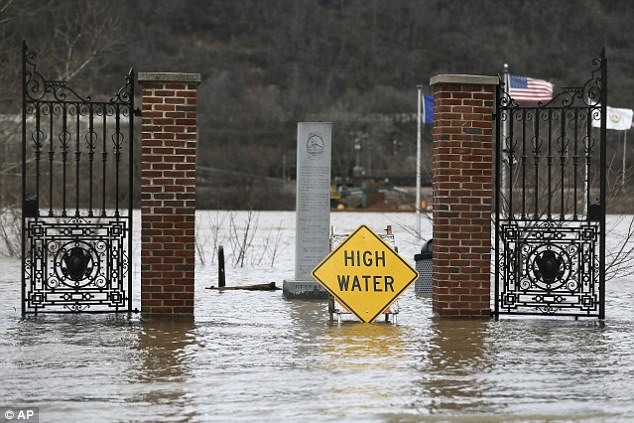 Both Ohio and West Virginia are meant to reach moderate flood levels as the Ohio River rose to 34.9 feet, its highest in twenty years, according to USA Today. The normal level is 12 feet.

In Cincinnati, where most of the city looked underwater, the river reached past 60-feet.

The Louisville area is said to have suffered $200million in damage alone. 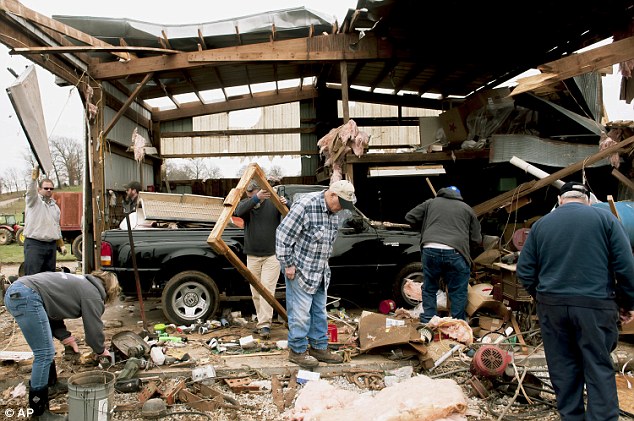 John Combs, pictured, sorts through debris as volunteers and neighbors help clean up in Adairville, after a deadly storm moved through the Kentucky area 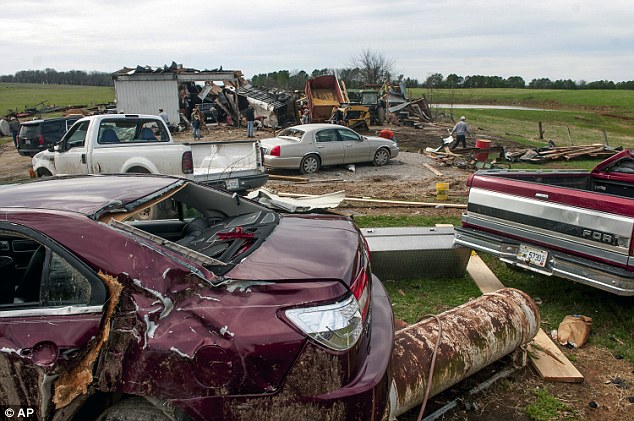 Pictured, volunteers and neighbors clean up debris in Adairville, Kentucky where three people died after a deadly storm moved through the area 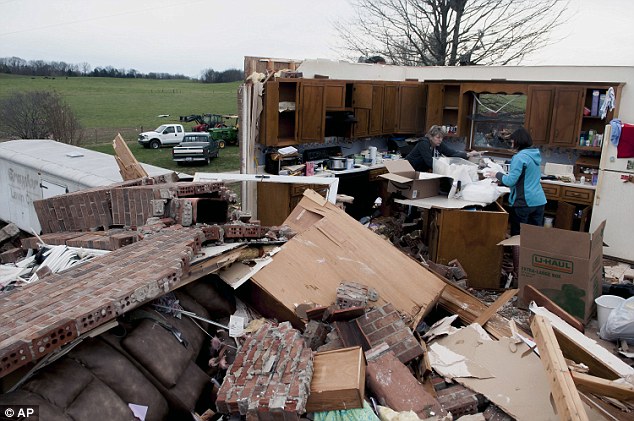 Pictured, houses in Kentucky were left in ruin after a deadly storm spread its way through central US and killed at least 5

In south-western Michigan, the body of a man was found floating in floodwaters in Kalamazoo. 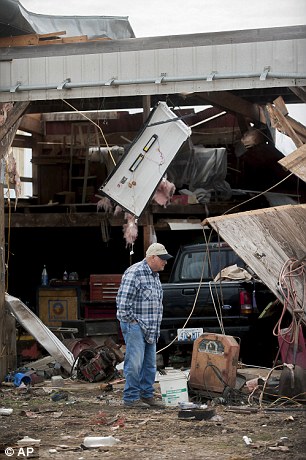 John Combs, pictured, looks on as volunteers and neighbors clean up debris as his home in Adairville, Kentucky

Officials said the death did not appear to be suspicious.

A body was recovered from a vehicle that was in a ditch in in western Kentucky near Morganfield, the Henderson Fire Department said. Tests will be carried out on the body.

Meanwhile, a male’s body was pulled from a vehicle in a creek near the south central Kentucky community of Franklin on Saturday, the Simpson County Sheriff’s Office said. The victim’s identify is being withheld pending notification of relatives.

Officials said Ms Combs was inside the home when it collapsed on her. She was pronounced dead at the scene, while her husband suffered minor injuries.

The fifth death was in north-east Arkansas, where an 83-year-old man was killed after high winds toppled a trailer home.

Clay County Sheriff Terry Miller told KAIT-TV that Albert Foster died on Saturday night after the home was blown into a pond. 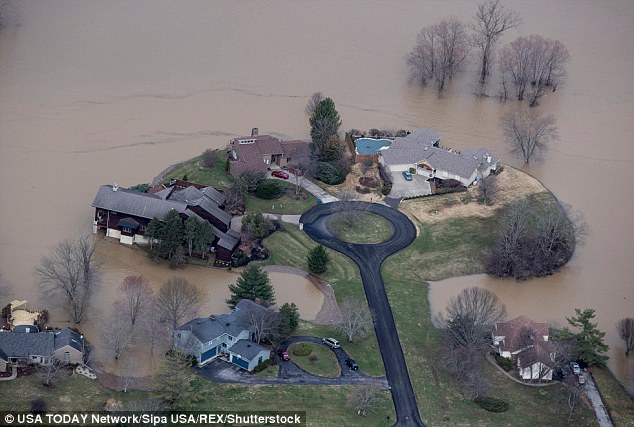 Pictured, Oldham County neighborhood in Kentucky is surrounded by the flood waters of the Ohio River after a severe tornado touched down in the area 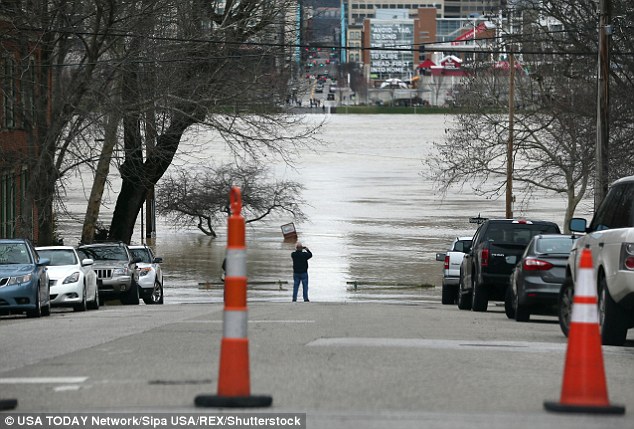 Pictured, a man takes a picture of flood waters at the intersection of Riverside Drive and Garrard Street in Kentucky 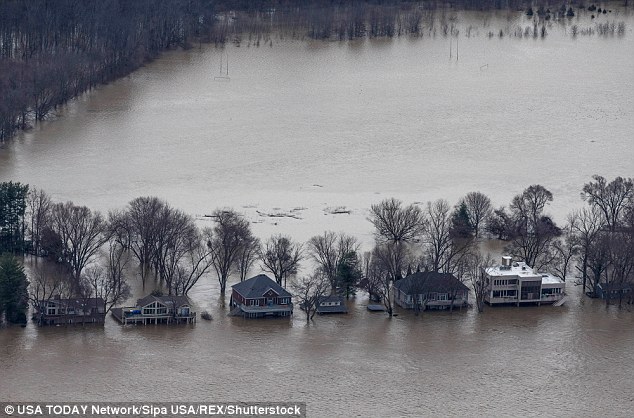 Pictured, flooded homes sit in the Ohio River, in eastern Louisville rose above the 60 feet mark for the first time in two decades Sunday morning

About 50 miles away, the National Weather Service said the roof was blown off a hotel in Osceola, about 160 miles north of Memphis, Tennessee.

In Middle Tennessee, the National Weather Service on Sunday confirmed an EF-2 tornado with maximum winds of 120mph hit Clarksville on Saturday.

Montgomery County Sheriff’s Office spokeswoman Sandra Brandon said at least four homes were destroyed and dozens of others were damaged, while 75 cars at a tyre plant car park had their windows blown out or were tossed onto one other. 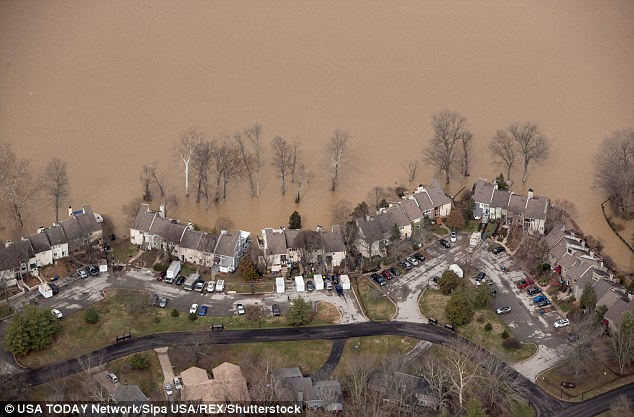 Pictured, homes along the Ohio river in Oldham County are dangerously close to the rising Ohio River, which continues to be monitored for moderate flooding 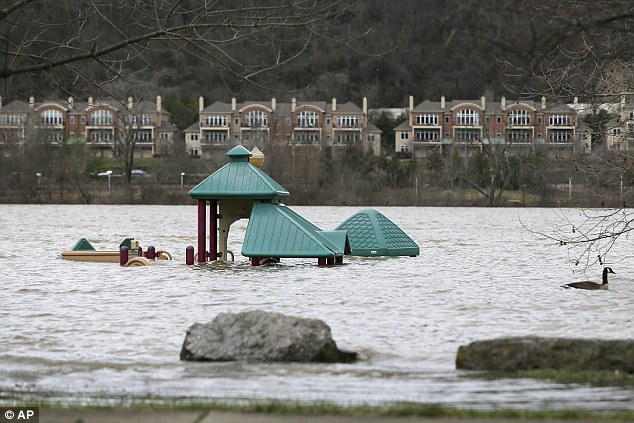 Pictured, a playground is submerged in water at Bellevue Beach Park in Kentucky after the Ohio River rose well above flood stage where moderate flooding is still expected 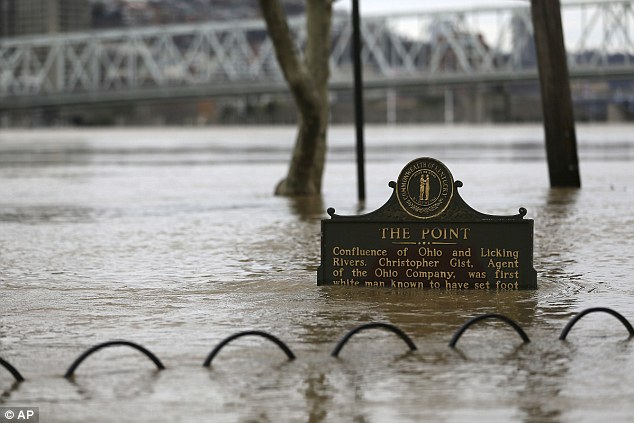 Pictured, flood waters nearly submerge a sign at the confluence of the Ohio and Licking Rivers, in Covington, Kentucky

At Austin Peay State University in Clarksville, a teenage girl was hit by falling debris at a college basketball game after an apparent lightning strike knocked a hole in the arena’s roof Saturday night.

School director of marketing and digital media Kevin Young said the 15-year-old girl was taken to a hospital as a precaution. The extent of her injuries were not released.

Missouri Gov. Eric Greitens signed an executive order earlier Saturday declaring a state of emergency ahead of the anticipated storms and flooding in parts of southern Missouri.

The order activates the resources of the Missouri National Guard and ensures state resources are available in the event of weather damage. 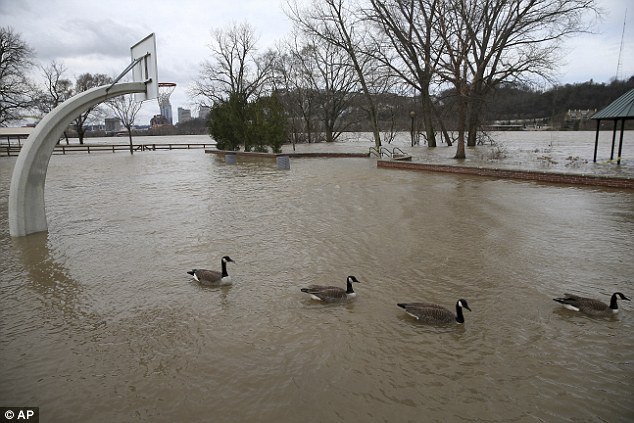 Pictured, waters from the Ohio River flood a basketball court in Bellevue Beach Park, Kentucky. The weather service said moderate flooding was expected along the Ohio River in Kentucky and Ohio, including in Cincinnati, where the river was 8 feet above flood stage Sunday 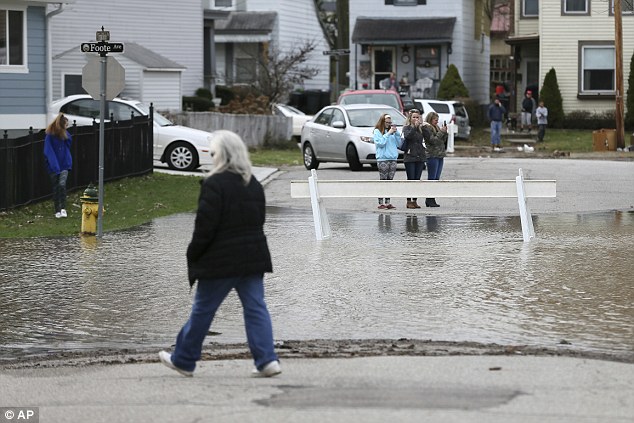 Pictured, residents of Bellevue, Kentucky take pictures of flood waters at the intersection of Foote Avenue and Frank Benke Way

A levee breach along the Kankakee River in northwestern Indiana had local officials urging about 30 homeowners to evacuate.

Keener Township Volunteer Fire Chief Randy Woods said the breach was relatively minor when it was discovered about 3 p.m. Friday near Demotte, about 50 miles southeast of Chicago.

Local residents tried to sandbag the breach ‘to get it under control, but it just got bigger and bigger,’ he said. Local firefighters were called to help them, but eventually everyone had to pull out for their own safety.

No injuries were reported.

The weather service said record flooding was occurring along the Kankakee following several days of heavy rains and snowmelt that sent streams out of their banks from the Ohio River to Michigan and Wisconsin.