CEO compensation has grown 1,000% in the past four decades

CEO pay has increased 1,000% in the past four decades and top executives now make 278 times the average worker

CEO compensation in the U.S. has grown nearly 1,000% in four decades, and the average CEO now makes 278 times the median worker.

The findings came in a study released on Wednesday by the Economic Policy Institute, which argued that ‘exorbitant CEO pay is a major contributor to rising inequality.’

The increase was more than 25–33% greater than stock market growth, the authors found.

In 2018, Tesla CEO Elon Musk (above) was the highest-paid CEO in the U.S., thanks to a stock-compensation package valued at $2.28 billion 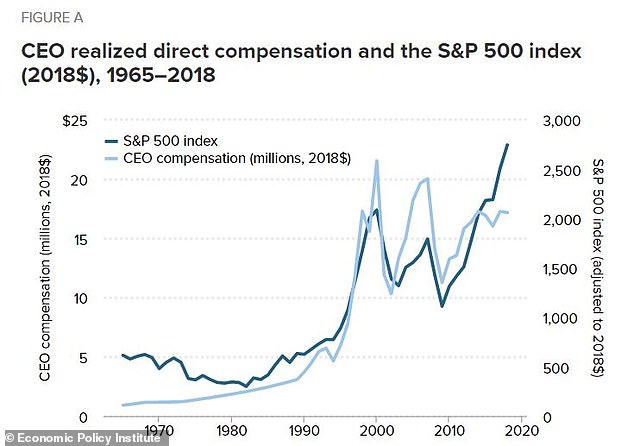 ‘CEOs are getting more because of their power to set pay, not because they are increasing productivity or possess specific, high-demand skills,’ wrote the authors.

Using one measure of stock-based compensation, the CEO-to-worker compensation ratio was 20-to-1 in 1965, the study found.

‘Exorbitant CEO pay is a major contributor to rising inequality that we could safely do away with,’ the study authors argue. 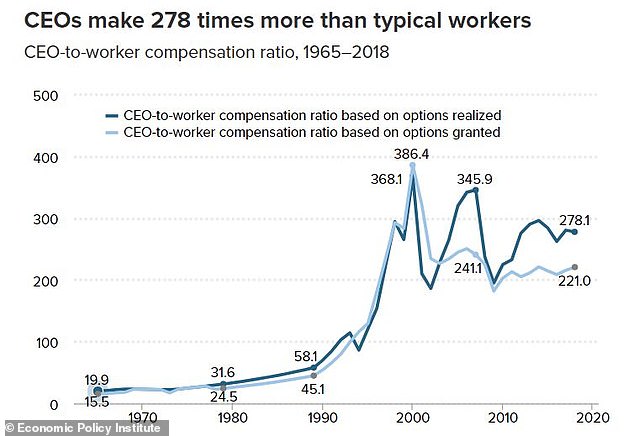 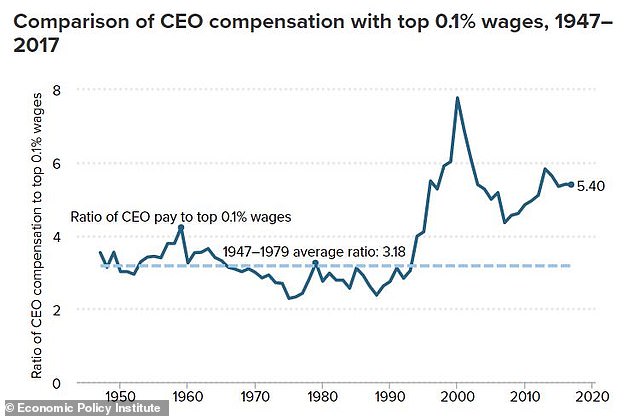 The chart above show the ratio of CEO pay to the average top 0.1% of wages

‘This escalation of CEO compensation, and of executive compensation more generally, has fueled the growth of top 1.0% and top 0.1% incomes, leaving less of the fruits of economic growth for ordinary workers and widening the gap between very high earners and the bottom 90%’ the report continues.

The authors argue that the increase in CEO compensation cannot be attributed to a rising premium on elite education.

‘This finding indicates that the escalation of CEO pay does not simply reflect a more general rise in the returns to education.’

In 2018, Tesla CEO Elon Musk was the highest-paid CEO in the U.S., thanks to a stock-compensation package valued at $2.28 billion.